A good episode, but hoo boy – that ending…

I think I sometimes fall into the trap of considering Yuukoku no Moriarty an attempt at a faithful updating of Doyle.  It really isn’t, and thus it’s not fair for me to hold it to that standard.  This is nothing new – the series has been doing non-canonical things (and incorporating earlier non-canonical elements) since the beginning.  It’s perfectly free to do that and it’s hardly the first, but the fact is that it can be a struggle for me to remember that. 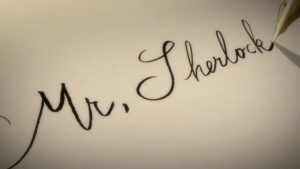 In most respects I thought the denouement of “A Scandal in Bohemia” redux came together pretty well.  You just have to accept certain pretexts to get there: Irene genuinely got herself in over her head, and Sherlock became emotionally tangled in her situation.  The truth is that his best chance to keep her alive is exactly what he did, putting her into the hands of someone operating outside normal society to protect her.  She’s a threat to the British government as long as she’s alive, and that puts her at risk either at home or abroad. 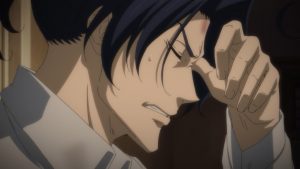 Taken at her word (and I see no reason not to at this stage) Irene’s ideals actually do seem to overlap pretty well with the James Moriarty.  So it’s no stretch for her to go to work for them, and only logical for them to fake her death in order to facilitate that.  The meeting at the church was pretty believable, with the fake cops and the envelope (which Holmes later burns once he realizes it’s no longer needed) a fairly logical means of ensuring mutual cooperation.  I do wish Sherlock would have figured out the Lord of Crime’s identity by now because I think the dynamic between them is stronger if he has, but I suppose that would take the plot places it’s not ready to go to yet. 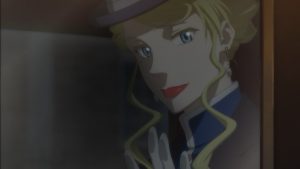 I’m less happy with the meeting between Mycroft and the James (and Adler), though it had its interesting moments.  Robespierre being a British agent is a twist, I grant you.  And the idea that he staged the Reign of Terror in order to unite everyone against him is novel, though a bit of a stretch – but it’s necessary in order for Yuukoku no Moriarty to reframe the brothers’ actions through a self-sacrificial lens.  As for Robespierre actually being Sherrinford Holmes, that was certainly out of left field.  Sherrinford is an interesting oddity in Holmes folklore – the only connection to Doyle is that Sherrinford was one of his rejected names for the titular character, but Sherrinford nevertheless shows up in numerous non-canonical Holmes reboots starting in the 50’s (even Doctor Who) as the eldest Holmes brother. 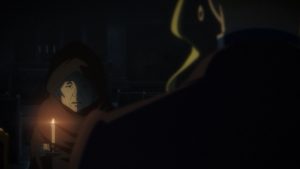 What doesn’t fully grok with me here is Mycroft walking away on the terms he does.  I know he has a secret to protect that’s more personally dangerous to him than even the government (oh wait – he is the government, I forgot) but I don’t feel like he’s getting enough here for what he’s giving up – never mind telling the James about his family connection.  And then there’s the ending – if name-dropping Sherrinford was left field, Adler deciding she was “James Bonde” was right off of Waveland Avenue.  That’s too cute for its own good if you ask me – you don’t need to try and be clever and tie in something that has nothing to do with anything, just to say you did.  Ah, well – I’m still enjoying this trip quite a lot. and I suppose that’s all that matters.