Recently, Lim Young-woong fan club’Hero’s Era’ Seoul District 4 announced that it has donated 3 million won, 50 boxes of red ginseng, and 4,000 pairs of socks to the Seoul Briquette Bank of the Babsang Community Welfare Foundation. These donations and donations are used for neighbors in need.

They introduced, “Seoul has 1234 meeting rooms, and we are the four district rooms in Seoul, which correspond to five areas in Dobong, Nowon, Gangbuk, Seongbuk, and Jungnang.” 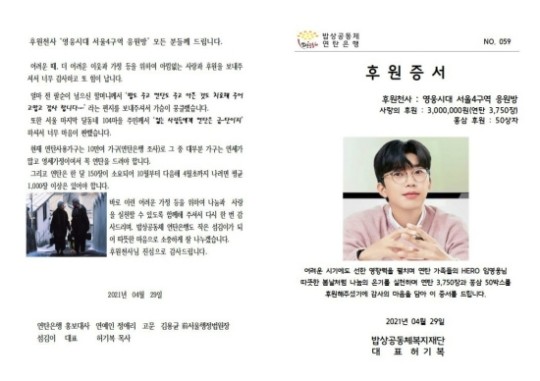 When they started donating for the first time, they said they wanted to steadily serve, starting with the briquette delivery donation, just as Lim Young-woong did briquette service when he was unknown.

Lim Young-woong fan club’Hero’s Era’ Seoul District 4 said, “There was a membership fee that was collected for local room affairs in June. I gathered opinions to use it as a donation.” 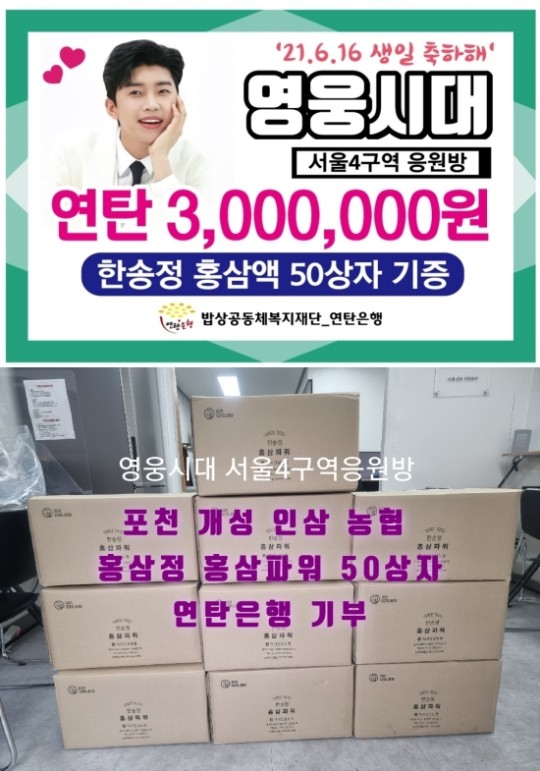 They said, “Because it is approaching on June 16th of the birthday of Lim, I collected 3 million won by adding more money to the membership fee of about 2.5 million won.”

“A fan of the members of the Pocheon Gaeseong Ginseng Nonghyup agency also supported 50 boxes of red ginseng (retail 58,000 won, approximately 2.9 million won), and the fan helped donate about 4,000 pairs of socks.”

“I think it’s an honor to be able to do something to make Hero shine even more,” said Lim Young-woong fan club’Hero’s Era’ Seoul District 4 room. “Especially, the 4th zone room was planning a donation for the hero’s birthday, but the hero hurt his leg and hurts his heart,” he said. “I made a donation a little earlier to encourage me to do my best. It was done with the precious heart of the fans who want to give the hero a strong strength.”

They said, “It was a membership fee that was collected as the price of their meals, but they generously participated in the donation, and none of them had objections. If it is for the hero, they are passionate fans who support all night.” “The reason fans can support this is because the song of the hero brings us comfort,” he said.

They said, “Like the cheering phrase for the 4th zone,’Hero’s Age’ will continue to exert good influence and support the hero, and the hero will also become a star that shines forever in the heart of the Hero’s Age, and’Hero’s Age’ exists because of the hero. I am happy because it is the age of heroes.”