After a recap episode  (reportedly, as is usually the case, necessitated by production delays) Yakusoku no Neverland returns to the task of adapting the manga’s conclusion (apparently).  We can wonder all day long about why this series was so comically rushed, given that the manga – even despite having ended (and having serious story problems to begin with) – remains a big seller.  But whatever the reason it seems inescapable that this is indeed what’s happening, which leaves us in a very strange place indeed. 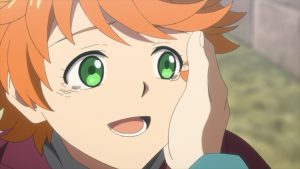 As readers of the site will know, I had serious reservations about the anime even when I assumed (quite naturally) that it would be a faithful adaptation, because I have significant issues with the manga’s second half.  What appears to be happening now is that we’ve jumped the entire middle section of the story – some of which was very good, though not all – to get to that vexing third act.  I don’t know what to make of it, to be honest.  Will an ending which faceplanted in the first place be made even worse by having lost all its build-up, or will that omission somehow make things so bad that they lap awful and wind up making things better? 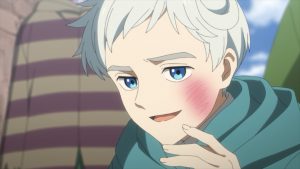 What I do know is this – there was one very, very important arc that was omitted altogether, and that section did a lot to set up the moral dilemma we see playing out here.  And that what should have been the big emotional crescendo of the second half – the reveal that Norman was alive – was totally undercut because it happened way too soon and without any preamble.  Norman’s barely been gone long enough to miss.  That also sets up the secondary continuity problem that all the stuff that’s supposed to have happened during his absence hasn’t had nearly enough time to actually happen. 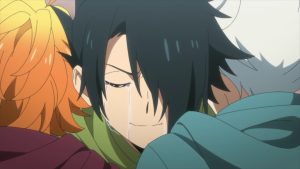 So that’s where we are, and one major obstacle I’m running into is a direct offshoot of all that – Norman as a character just generally doesn’t make sense now.  He and the others have been apart for what, a few months maybe?  And now he’s… what, exactly?  While I didn’t necessarily agree with where the manga took his character we at least knew how he got there.  It’s all kind of fanfiction-y to be honest, which is actually how the manga itself read to me once it’d gotten to the point the anime is at now. 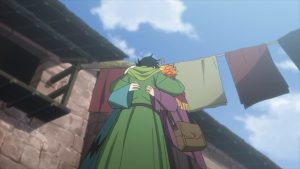 The moral dilemma we’ve warped to is at least straightforward.  Norman wants to genocide the demons, and he’s miraculously invented the means by which he says he can do it.  Given everything that’s happened I’m not sure anyone could blame him (though it would help if the story had taken us through it).  Norman’s gung-ho disciples have no backstory in the anime, so they’re basically here as cheerleaders for his plan and foils for Emma.  She of course has serious reservations about the plan, and Ray is deferential to her despite the fact that he claims not to share them. 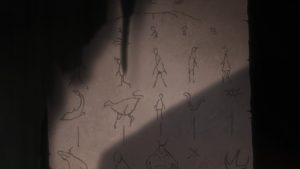 Is Emma a hypocrite?  It does seem odd, given all she’s seen, that she would be willing to put her so-called family at risk over a matter of idealism.  Of course she has the advantage over Norman in having met Mujika and Sonju (or does she?), which impacts her thinking in two important ways.  It humanizes (and I choose that word quite intentionally) demons for her, and it gives her concrete reason to suspect that Norman’s plan may be built on a faulty premise.  As Ray says, Sonju and Mujika could have been lying, but he clearly seems disinclined to believe so, which can only mean that Norman’s theory is incorrect. 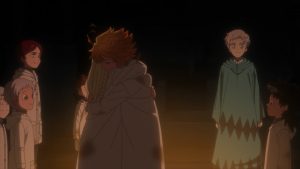 I can only call my feeling in looking forward from here “trepidation”, though with a side of curiosity.  I don’t know what the anime will do, and I don’t know if (or even how) it will work.  Based on the evidence of this episode it’s going to retain the essence of the manga ending, which is ironically the part I was hoping would be changed.  I’ve seen that ending once and been totally unconvinced by it, but again, maybe someway and somehow this will actually end up working better without the development which preceded it.  We can always hope…