Will the flagship Find X2 launch event be postponed to 2020?


Last year, OPPO launched a flagship Find X with an extremely unique slider design. And according to some previous rumors, its successor could be called OPPO Find X2.

Currently, OPPO fans are eagerly awaiting the arrival of Find X2, but today's OPPO Vice President Weibo post, Brian Shen extinguished all hope when he confirmed that the phone would not released this year.

According to Gizmochina page, rumors that appeared earlier this year indicated that the Find X2 will be released in mid-2019. This smartphone is rumored to come with some features such as 10x optical zoom and screen fingerprint scanner. The picture supports unlocking with two fingers. It is also speculated with a perforated screen, Super VOOC charging technology and wireless charging. However, the latest leak information said that Find X2 will be released in 2020.

Specifically, Brian shared that the OPPO Find X2 release date has been postponed until 2020. The company is currently considering the improvements of the Find X smartphone and is aiming to launch a top smartphone. better next year. Through another Weibo post, Brian stated that the company will launch another series of smartphones in the second half of 2019. 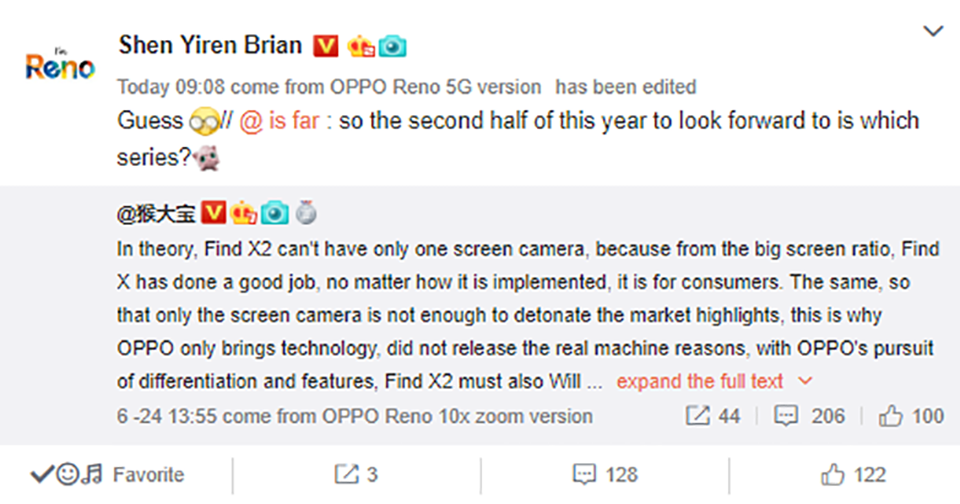 It is known that in the first half of 2019, OPPO mainly focused on two smartphones Reno and Reno 10x zoom. After the duo was released in April, Brian confirmed that the company had eliminated its R-series because it wanted to focus on the Reno and Find lines. Therefore, it is likely that in the near future we will see a few new Reno members of OPPO come out of the light. Wait and watch it!