Why do many selling Honda models 'hit the bottom'? – VnReview


Honda motorbike prices are expected to hit the bottom in June 2019, although supply has fallen sharply compared to the previous. This is supposed to be because agents want to stimulate demand because the market is in low season.

Honda Vietnam's motorcycle sales to dealers in June 2019 are forecast to decrease by 26% compared to the previous month. However, this is surprising in that the price of many vehicles at dealers tends to fall sharply, to the point of 'hitting the bottom'.

Specifically, the majority of Honda's selling car models at dealers are lower than the proposed price. The biggest drop was in Blade cars when the actual price was lower than the suggested price of 0.8-1.3 million dong. Wave Alpha and Wave RSX models (including mechanical brakes, disc brakes, molded brakes) are priced lower or equal to the proposed price. Notably, the Future 2019 series, although newly launched in Vietnam, still has a constant or lower price than the proposal.

Vehicles are a very hot selling part of Honda, but surprisingly, the price is not much different from the proposed price. In particular, the Vision model is currently reduced by about 0.5-1 million VND and at 29.2-29.7 million VND. This is explained by the fact that this vehicle has a large inventory volume at its dealers. Lead cars or Air Blade models are currently no longer higher than the proposed prices but only more than about 0.1 to 1.4 million VND / car. At the same time, the PCX model continues its downward trend and currently all models are priced lower than the recommended price. In particular, the model of PCX hybrid is priced lower than the proposed price of VND 5 million (fluctuating around VND 85 – 85.5 million).

This June, two previous SH and SH mode cars are still considered to be much higher than the proposed price, but now also reduced by about VND 2-3 million. This will cause the difference to decrease and the car will return to a more comfortable price. However, the price of these two models is still much higher than the proposal – with SH mode is about 4 – 12 million dong and SH is about 11 – 13 million dong depending on the version. In particular, the SH 150 series of translucent black copies are in a tight condition so agent prices will not decrease and continue to be very high (VND 102 – 113 million depending on the version). 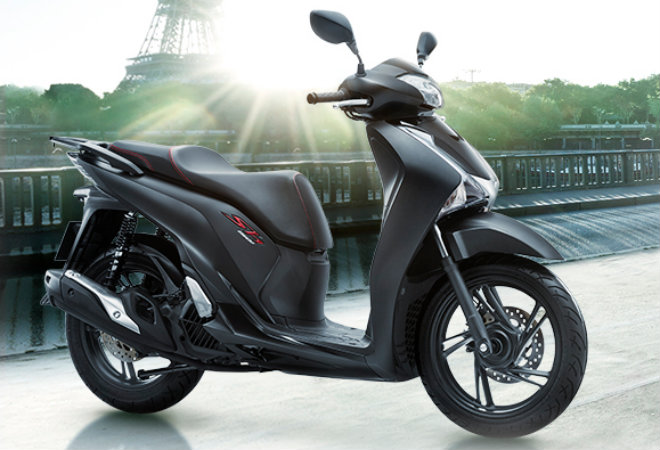 In the segment of scooters, Winner models currently sell under the proposed price of about VND 5-6 million. This is a model that owns the price of 'hitting the bottom' before, so it seems that the money you have to spend on owning products from Honda will likely not decrease and at 39.5 – 41.5 million VND on each version.

The price of motorbike in June 2019 of Honda decreased very deeply and at a record low recently with many different lines. This is explained by the demand of the people is not great. In other words, June is usually the time when few people buy a motorbike or 'low' time period. According to dealers, this is a rule that has been going on for many years and nothing unusual.

At the same time, a number of motor dealers have a large inventory of Honda. This makes both car import volume decrease and price also decreases to stimulate demand. Also according to Honda's distribution agents, if there is a need to buy motorbikes, this June is a very favorable time because the price is low. People should buy this time without waiting until the lunar July. By September or 10 when the opening time of many universities and colleges, the price of cars could increase.

In another dimension this June, there is a lot of information from dealers that Honda will launch a new Winner X. More specifically, the latest model of the manufacturer from Japan is likely to be launched in mid-June and officially sold in early July 2019. 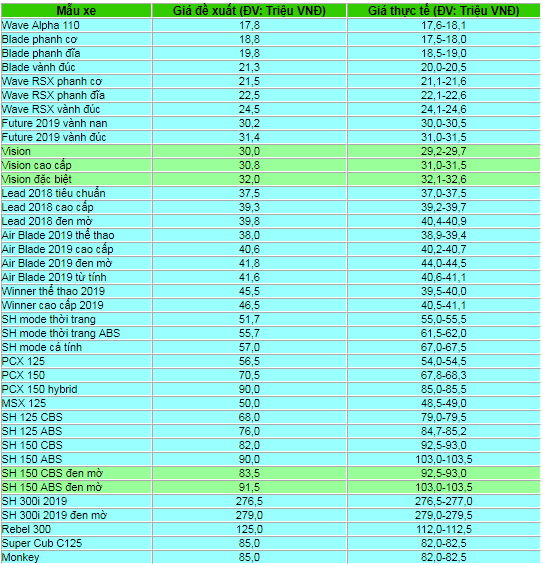 Honda motorbike price list in June 2019. This is only the reference price, the actual price
Depending on the region and the dealer