Why can’t a smartphone make a thermometer like temperature? – VnReview

Why do smartphones not have thermometers?

Of course, smartphones are much more complex and can do much more than a basic digital thermometer. The problem is not that manufacturers can’t “fit” these sensors into. In fact, smartphones have a lot of heat sensors. They are used to measure the temperature of batteries or chips to prevent the worst case scenario from happening.

However, measuring the ambient temperature from a device that continually goes through cycles of cooling and cooling like a smartphone is difficult. Obviously, the sensor needs to be placed on the outside of the phone. But smartphones cannot put such thermometers because they will make the device worse. So, to solve this, the only way is to embed it in the frame or the back of the device.

However, these parts are often used to escape heat from internal components, or in other words, they are the basic passive radiators. In essence, manufacturers will have to put thermometers on radiators and still make measurements that make sense to the user.

There are many ways to reduce the influence of the device’s own temperature. Using data from internal sensors and smart algorithms, manufacturers can calculate numbers closer to actual ambient temperatures than just a single thermometer. However, this “near” level is still not good enough, or in other words, it is only a “best prediction”. And above all, if we stop at the prediction level, we all can do that.

There are still smartphones with thermometers 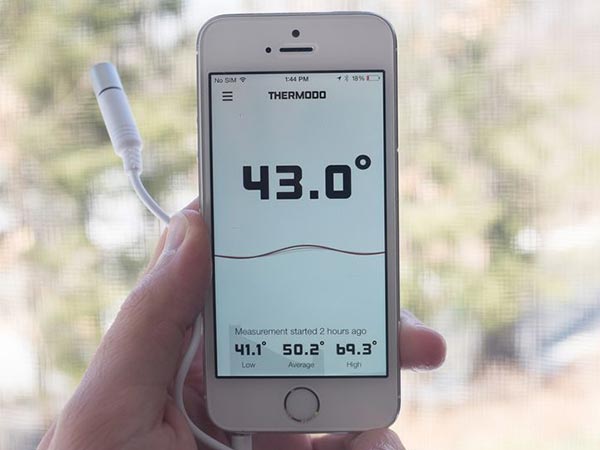 The idea is nothing new, and manufacturers have tried it out. Specifically, Samsung and Motorola have made phones with thermometers. For Samsung it is the Galaxy S4 and Note 3. According to this feature’s instruction manual from Samsung, to measure the temperature, you must let the device cool down when it is hot during use and away from their hands. ta.

This is far from reality, even if you follow the instructions exactly and the measurement accuracy is hard to believe. That is probably why Samsung abandoned this idea and never tried again.

Do not trust any thermometer application

However, this inaccuracy has never stopped for app developers. Like all previous shady blood-measuring apps, there are hundreds and even thousands of apps claiming to turn your phone into heat. In fact, they will take advantage of every space to display ads, but also show the temperature that they predict.

Our phones can do a lot of things, but there are limitations they can’t do like measuring ambient temperatures.

Minh Hung (according to Phone Arena)