Nintendo 2DS (hereafter, 2DS) is often the only person who is concerned about the price of 9,800 yen (excluding tax). The lineup without the 3D display function has been on sale since September 15, 2016. Originally, 2DS was released in the United States on December 7, 2013, and two and a half years after that, on February 27, 2016, also included in Japan with "Pokemon Red, Green, Blue, Pikachu" each It appeared in the form of a limited pack that was sold out quickly.

This time, comparing the 2DS sold as a single unit as a regular version and the “New Nintendo 3DS” (hereinafter “New3DS”) sold for 16,000 yen (excluding tax), what is different? Which is “buy”?チ ェ ッ ク Let's check points that matter. 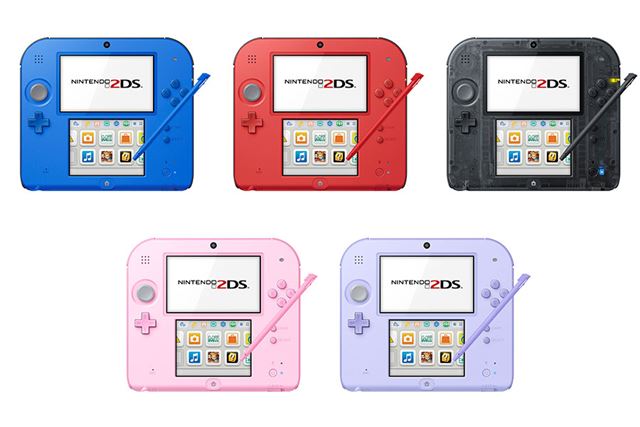 First of all, it is large, but you can see that New3DS (opened) in the vertical and 2DS in the width is longer. According to actual measurements, New3DS is 147 mm long and 142 mm wide, and 2DS is 127 mm long and 144 mm wide. As for the thickness, the 2DS adopts a slender body with a thin front and a deep back, and is characterized by a design that is close to the state where the New3DS is open. The screen size is the same as the 3.53 type and the old model "Nintendo 3DS" (hereinafter, the old 3DS), and slightly smaller than the New3DS type 3.88. The lower screen is also the same size as the old 3DS, 3.02 type, which is also smaller than the 3.33 type of New3DS. The weight of the 2DS is about 260g, and that of the New3DS is about 253g, which is almost the same. 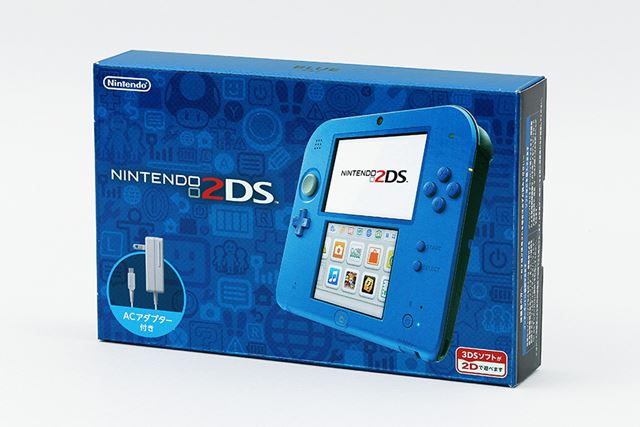 2DS package. In a compact package, New3DS shows that it is with an optional AC adapter (952 yen excluding tax)

When opened, it contained the 2DS main unit, AC adapter, AR card, and instruction manual. With an AC adapter, you can play immediately even if you buy only the main unit. The 4GB SDHC memory card and dedicated touch pen are already installed on the main unit 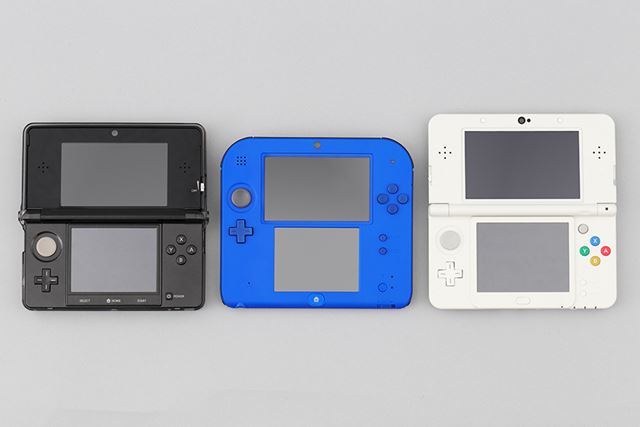 Old 3DS, 2DS, New3DS from left to right. Looking at this, you can see that the liquid crystal of New3DS is slightly larger. The basic arrangement of the slide pad, cross button and ABXY button is almost the same 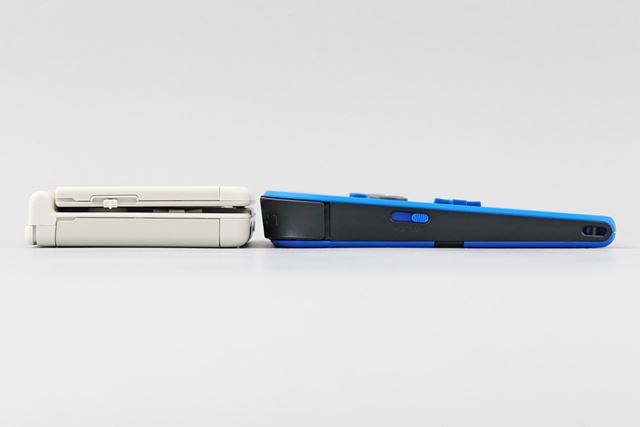 The 2DS adopts a design that is thin on the front and thick on the back. It is easy to understand if you see New3DS and 2DS side by side

The location of the power button etc. has been greatly changed in 2DS because it has become a straight type instead of a foldable type. In New3DS, the buttons are concentrated on the lower screen side, but in 2DS, the impression is that it is closer to the center. In the New3DS, the LR buttons on the folded part were placed on the upper left and right sides of the main unit in the 2DS. The location of the LR button is thick, so it's nice that your finger fits perfectly without any discomfort. The location of the slide pad and the ABXY button moved to the top, so the line of sight seemed to move from the lower screen to the upper screen. It may seem a little strange at first, but as long as you played it was fine. 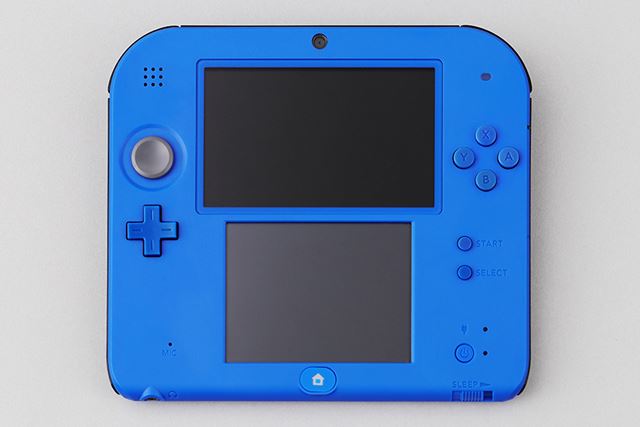 In New3DS, it automatically goes to sleep when folded, but in 2DS, a sleep switch is provided on the near side. By sliding this switch to the right, you can always go to sleep. In New3DS, the slot for inserting the game card on the front side is moved to the top in 2DS. It seems that the depth has increased slightly, and it is likely that the card will not pop out due to erroneous operation. The speaker is monaural to the New3DS stereo, but you can listen to the sound in stereo by connecting headphones.

One of the features of 2DS is the sleep switch on the front right side of the main unit. It's not a hard switch, so if you throw it in your bag, it's possible that you'll be rubbed with other luggage and unlocked. The headphone jack was in the center of New3DS, but moved to the left

The SD card slot is prepared on the right side, and the lid can be opened just by sliding it up

A 4GB SDHC card is attached as an accessory

Not only are there no ZL, ZR, and C sticks added in New3DS, but there is no NFC area on the lower screen side. Most 3DS-specific titles can be enjoyed even when the 3D display is off, but there are some that require 3D display. Check in advance if the title you want to play is required for 3D display. In addition, the power button is slightly recessed than New3DS, so there is less worry about accidentally pressing it.

In addition, two cameras are prepared on the back like 3DS etc., and 3D photos can be taken. Since the shooting data is not visible in 3D with 2DS, it is necessary to move the data to 3DS if you want to view it in 3D. 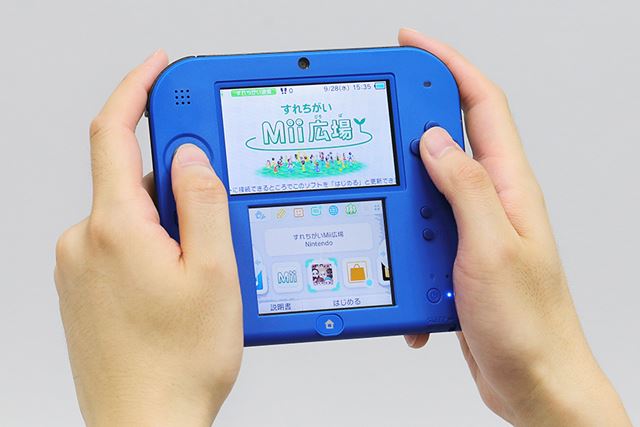 The position of the LR button has moved up slightly compared to the old 3DS and New3DS. People with small hands may feel a little hard to press 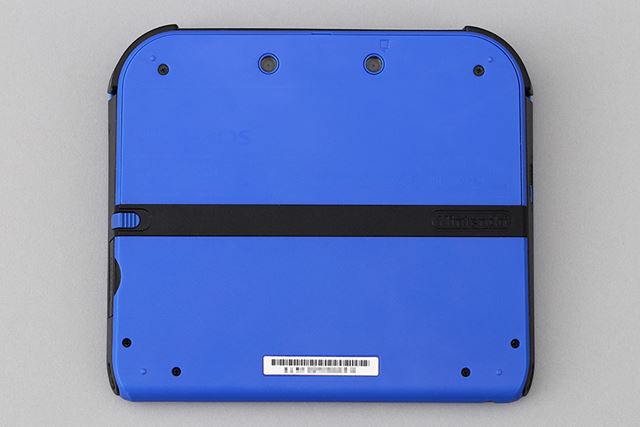 The 2DS has a bare LCD screen, so if you do not take protective measures such as applying protective films on both the top and bottom surfaces, you may get scratched in a bag or the like without your knowledge. Protective film and carrying case may be required 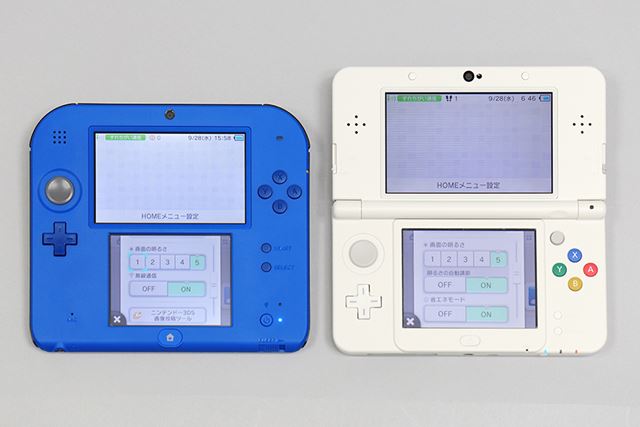 New3DS has "automatic brightness adjustment" and "energy saving mode", but the function is not in 2DS. If you want to play for a long time in a game, setting the screen brightness to 1 or 2 in advance seems to extend battery life. However, do not overdo it and try to play at your own comfortable brightness.

Performance comparable to 3DS, but if you're used to New3DS …

Since the processing speed of 2DS is almost the same as the old 3DS, let's actually run the software and measure roughly … Before the, try what happens if you insert "Xenoblade", a special software for New3DS, into 2DS I tried. When I try to start the game with the game card installed, the message "This software is exclusive to New Nintendo 3DS. It cannot be used with this console." Please note that New3DS dedicated software does not work with 2DS.

When the New3DS software is inserted, such a warning message is displayed. No matter how you start it, those who want to play will choose New3DS

"Xenoblade" is an RPG released on April 2, 2015 as the first exclusive software for New3DS. It was originally released as software for Wii, but was remade for New3DS. It features a battle that seamlessly develops with the open field, and the battle between humans and machines set in the body of God. Familiar with the "Xeno" series, Tetsuya Takahashi of monolith software is involved in the production

Next, using the software "Monster Hunter Cross" with a long loading time, I checked the time required for 2DS, New3DS, and old 3DS, and the experience of playing. First, select the “Monster Hunter Cross” icon from the home screen and measure the time until the notice is displayed on the upper screen. The result is about 20 seconds for 2DS and old 3DS, and 5 seconds for New3DS. In addition, I examined the time until the home button was pressed during the game, and the response time was 2 seconds and the old 3DS took about 5 seconds, while the New3DS was instantaneous. It's okay for those who used to play with the old 3DS to switch to 2DS, but users who are used to the speed of New3DS may find it frustrating.

The first video is 2DS, the second video is New3DS speed. There was a difference of about 15 seconds in the actual measurement. It seems that there will be no problem if the main body to play first is 2DS or migration from old 3DS, but some people will get the impression that they are waiting from New 3DS 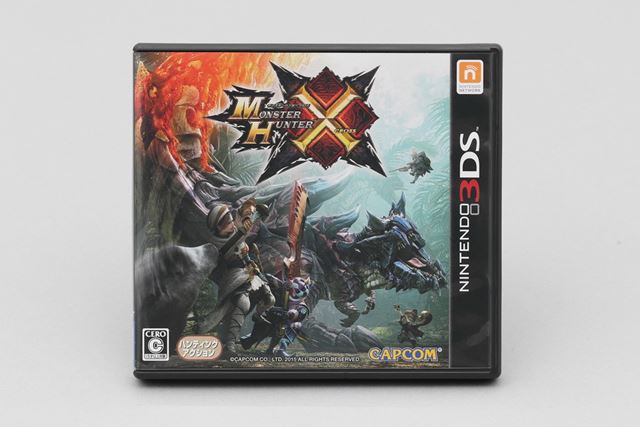 "Monster Hunter Cross" is 3DS software released on November 28, 2015. In addition to 14 types of weapons, various hunting techniques and 4 types of hunting styles have been added. By crossing these, you can hunt with your own hunting style. Nyantar mode that can be operated by Otomo Iruu is also added, and quests dedicated to Nyantar also appear

Ideal for those who do not need 3D display and children's gifts. Excellent cospa

The 2DS can be purchased at a price that is as low as 6,000 yen compared to the New3DS, and has a high cost performance, including an optional AC adapter. Until now, the 3DS series was a bit difficult to buy because of the price … Even those who were reluctant to buy it could buy it for almost 10,000 yen, so they should be able to purchase it easily. Not only famous titles such as the “Monster Hunter” series and “Dragon Quest” series, but also a rich variety of genres of software, there is no doubt that it is a hardware that everyone can play with satisfaction.

Because it is cheaper to buy, it does not support 3D display, but if you are a small child under 6 years old, continuing to look at 3D display may affect eye growth, so it was originally guided to turn off 3D display and play Have been. Even in such a case, it can be said that there is no problem even if 3D display is not supported for small children to play. Nevertheless, I want to be careful not to damage the LCD screen. In addition, New3DS is more advantageous in terms of processing speed, but if you move from 3DS, the perceived speed is the same, so there should be no problem.

Based on these facts, it can be said that it is ideal as a hardware that can play 3DS software purchased for the first time, or as a game machine that can be purchased or replaced by people who currently have 3DS, and even presents to children. If you are interested, but still do not own the 3DS, why not buy 2DS and play with 3DS software?