What is fake petrol? Millions of liters of fake gasoline harmful to cars and motorcycles? – VnReview


Objects in the line of counterfeiting millions of liters of gasoline have used gasoline base A95 mixed with solvents, chemicals, colorants to create fuel harmful to vehicles.

How is the fake petrol line?

According to Colonel Le Vinh Quy, deputy director of the Dak Nong Police Department, the fake petrol trading line was discovered from the fact that many motor vehicles in the province caught fire. In the process of investigating the cause, the police searched Vinh Quang petrol and oil store in Gia Nghia town (Dak Nong), and found that there were 10m3 fake petrol in here. Continuing investigation, the police in Dak Nong province continued to discover two more petrol stores selling other fake goods.

After that, the Dak Nong Police Department prosecuted the case to investigate the production and sale of fake petroleum. From the investigation process, authorities discovered that this situation not only took place in Dak Nong province but also in many other localities across the country.

Police soldiers have been struggling for many days to investigate the verdict because the activities of fake petrol dealers are very sophisticated. According to the investigating agency, after some localities discovered fake petrol, the subjects did not put the material down to the place to mix, but did this right at the warehouse.

During the investigation process, authorities identified fake petrol supplies from the west and, in particular, from the oil store of the giant Cheng Chang. This person was the Director of My Hung Company Limited, based in Lich Hoi Thuong town, Tran De district, Soc Trang province.

From May 28 to June 2, the Judge Board conducted a search of six locations where the subjects organized mixing and concealing fake petrol. Accordingly, the authorities have caught the subjects who are carrying out RON-based solvent, pigments into fake gasoline.

On the evening of May 30, the Ministry of Public Security's functional forces suddenly searched Mr. Trinh San's petroleum depot in My Xuyen town, Soc Trang. The search here until 2:00 am on June 2 has been completed. 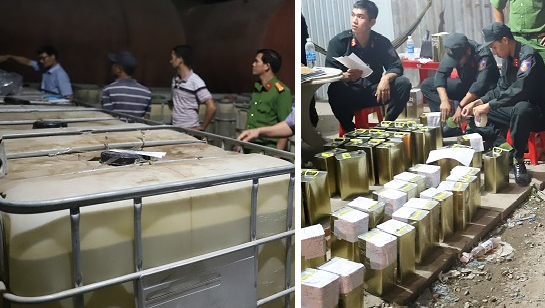 Exhibits seized in the case

Until now, the authorities have seized 3,264,281 liters of different types of solution, of which 2,183 liters of mixture have been made into fake gasoline, 432 liters of unmixed solvent, 3 ships, 6 tank trucks, 5 pump, 50 kg color. At the same time, 23 defendants were prosecuted in this case to investigate the act of producing and trading counterfeit goods as petroleum.

How is fake petrol done?

According to authorities, all owners of fake petrol stations know the origin of their imported goods. However, they still put in the cellar for sale and thus gained a great profit. The incident took place in many localities on the water load but is in the process of investigation so it is impossible to accurately know all gas stations selling fake goods.

At the press conference on June 6, Dak Nong police reported that subjects used A95 base gasoline mixed with solvents and other chemicals to create fake gasoline. 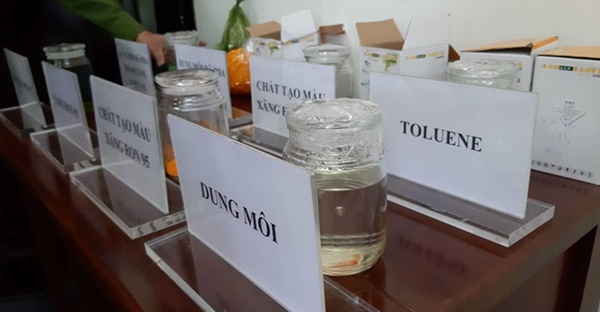 Accordingly, the subjects often use solvents as products during the distillation of petroleum. They often have very low RON (only about 60), so they are only used in industrial products such as blending with paint, wood production, tanning and not being used to form gasoline.

How does fake gasoline affect cars?

Until it was discovered, a fake petroleum line involving Trinh Sieu slipped hundreds of millions of liters of finished products to the market. From the fake petrol mentioned above, we can see that the subjects will mix chemicals with a ratio of real gasoline to sell to dealers. It is also because there are chemicals plus solvents with very low RON index that make the finished product possess a lot of impurities.

In an interview on Zing, Thanh Lam motivational mechanical engineer said: 'If fake gasoline has harmful substances to the engine, it will cause rapid wear of mechanical parts, reduce engine power, affect the operation of the engine and related systems (exhaust gas handling system). , sensors of charging and discharging systems) '.

According to experts, when using fake gasoline, the engine of vehicles (motorcycles, cars …) will certainly be reduced capacity and longevity. At the same time, the car's engine will heat up when using fake gasoline, this process will take a long time to cause the wire shell, surrounding plastic shell to heat up, when moving will be broken. This can easily lead to an explosion of electricity.

At the same time, using fake gasoline may also cause the filter of the car to be damaged. It leads to a situation where the fuel tank will easily be penetrated by dust and dirt, which greatly affects the engine. At the same time, the car can also be stopped abruptly when using fake gasoline because the internal combustion process does not produce the necessary capacity to maintain engine operation.