What games are gamers too busy with little time to play?


“Have a little time, what game to play?” is a very common question these days. This article will introduce you to some suitable games.

As we get older and the pace of our lives becomes more and more hectic, the time we spend for ourselves becomes less and less. The gamers of us will face a big problem: too many games but too little time, what game to play now?

The general answer is the game genre “hyper casual” or roughly translated as “super simple game”. This genre became popular on mobile around 2017 and is often considered a genre similar to early childhood games, with simple design and less detailed gameplay. One of the first widely known hyper casual games is nothing but Flappy Bird by a Vietnamese developer.

Since that success, hyper casual games have dominated the top charts in many mobile game stores like Google Play or the App Store. The features of these games are that they can be played while working or any other activity because of their simplicity and brevity. Here, invite you to take a look at a series of attractive hyper casual games that are suitable for the answer to the question “what game do you spend less time on”.

The Lion Studios game makes players confront directly with AI opponents in the “slap face” phase of the opponent. Its gameplay is simple: you just need to touch the screen when the needle goes to the center of the ruler on the top edge of the screen to hit the slap. When you drain your opponent’s health bar, your next slap will send them flying out of the ring and win. Moderate 3D visuals and humorous sound effects have brought this game to the top of the list of 2021 mobile games for busy people with little time.

SayGames’ Johnny Trigger is an answer to the question “what game time do you play”. It throws protagonist Johnny Trigger into a variety of dangerous situations where he jumps, flips, and slides through levels in stunning slow-motion shots. Your job is to help him pull the trigger at the right times to take down the armed bad guys and help Johnny get to the end of each level. If you like this game and want to find more similar games on PC, you can try My Friend Pedro.

Stair Run is a super fun game where players must collect materials, create stairs to overcome obstacles in each level. Getting through the stage is easy, but the challenge lies in using as few steps as possible to get higher rankings in the end game’s global rankings. The game has many advertisements between levels, but they are short enough not to break the rhythm of the game.

In this quirky game, players will tie ropes to their feet and then jump off a tower into a crowd of people waiting below. Then this crowd will grab you and only release when you touch the screen to release the bungee rope and our character will be ejected into the pool. The game will give style scores based on the actions you perform in the “flight”, so don’t forget to make a good swing. Actually, the author really wants to ask the guy who came up with this weird but fun gameplay. A game too suitable for those wondering “what little game time?”.

When playing Tangle Master 3D, your job is to help you untie a tangle of ropes in as few taps as possible. The game has simple and colorful images so it is easy to understand, easy to play but offers surprising challenges.

The author feels that this game was inspired by the 1337th mess of someone’s headphone cable. But beware: the game has extremely, extremely many advertisements so you may be upset. me while playing.

Perfect Cream is a game for those who need answers to the question of “little game time”. It is a culinary game that simulates the process of creating beautiful candies. By completing a variety of moves, you can make your own waffles or strawberry shortcake. 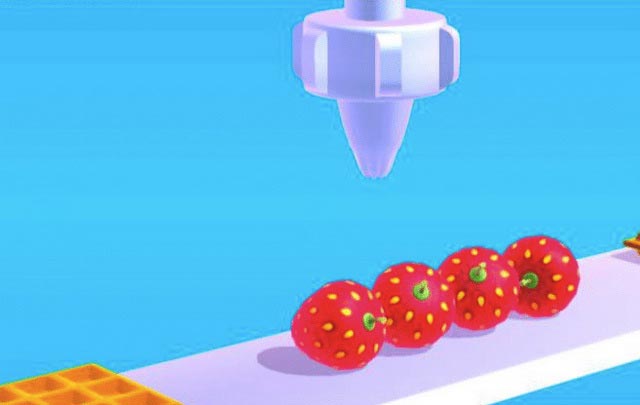 Like most other hypercasual games, Perfect Cream gameplay is entirely based on precise touch-and-drop timing, holding the tap to cover the ice cream on food but not letting the ice cream spill over the floor. However, do not play this game at night as it can make you crave and gain weight.

This is a 3D version of the aforementioned Stair Run, by the same developer. In general, Shortcut Run also requires players to collect and place stairs to pass levels, but this time takes players into a 4-way race through winding roads. Instead of using the collected ladder to climb over obstacles like in Stair Run, you will use them to create shortcuts that allow you to get past your opponents in the game screen.