Every few years, Microsoft releases a video describing the ideas and development directions for its products in the future. In previous videos, we have seen the emergence of countless potential applications and devices such as giant screens, sensors, ultra-thin tablets, and a variety of hardware components. and the software application that could change the way humans use computers in the future. However, this year will be a little different. Instead of releasing an introductory video like every year, this year Microsoft decided to open the Envisioning Center – the headquarters of Microsoft’s leading brains, the birthplace of ideas and policies. is vital to Microsoft but can also impact the future of the tech world – this week, and invite invitations to a handful of leading journalists and industry experts to visit and comment of the latest Microsoft plans for the future.

A brief introduction to Envisioning Center, this is exactly 7,000 square meters of concept development and laboratory, located on the company’s campus in Redmond, Washington. Step inside, if you do not learn before, you will probably have to think that this is a high-end resort with full amenities as well as an eye-catching design and decoration style, not a pillar. The workplace was as claustrophobic as we are used to. Inside Envisioning Center there are giant screens so people can hold meetings, present ideas anywhere, anytime, there are countless meeting rooms with dozens of devices that automatically identify participants, or unique desks that can inspire the way people will work and be creative for decades to come. Nearly every device here is controlled by touch, voice and even augmented reality, with software that simulates how Windows and Office work today. 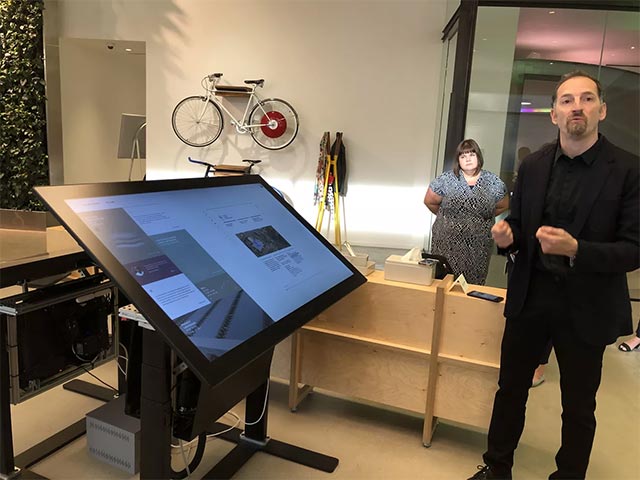 “The world in which we live and work is going through periods of real change at breakneck speed, and here we want to be pioneers in every trend, every change.” says Anton Andrew, head of creative team at Microsoft.

The huge amount of data that exists and is constantly increasing globally can make it difficult for many of us to keep up, and this requires companies like Microsoft to take a mechanical approach. version for the problem named the future of productivity. Although Microsoft may have had some success in the past when it tried to modernize Windows, Office, and many of its other software and services, in the past few years, the company clearly is clearly turning more attention to the web and open source communities to address the broader technological challenges.

At the heart of this strategic vision is what Microsoft calls the Fluid Framework. According to them, there is a way to speed up web collaboration work by breaking down the document structures into components, or in other words modularizing the document structure. Anton Andrew described these elements as small Lego blocks, allowing Microsoft to divide data into separate pieces so that customers can easily move from experience to experience. other quickly and seamlessly. “For us, the main problem is, after all, just the element of content continuity. And the Fluid Framework allows us to effectively control this element, ”said Andrew. 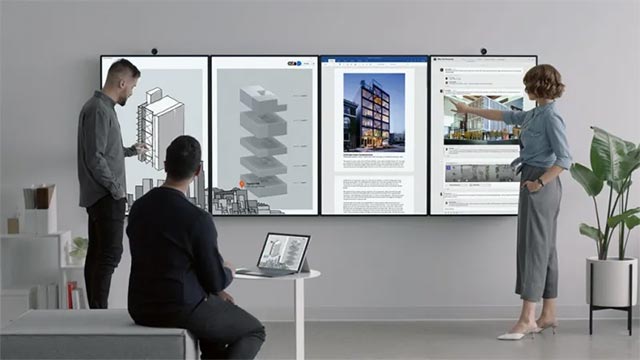 And now, let’s come to the other unique “facilities” at Envisioning Center, all related to the goal of improving collaboration capabilities, working to improve document processing efficiency, meetings. and everything related. First, let’s come up with a demo called “Surface Hub wall” by Microsoft. Surface Hub combines projection technology with 100-point Surface sensors to turn ordinary walls into smart surfaces that support touch, stylus and even voice commands. Like the Surface Hub 2, Microsoft’s idea here is to help companies turn walls into meeting spaces anytime, anywhere.

It can be said that this demo has somewhat changed the way some Microsoft products like Windows and Office operate today. We will no longer need to use the traditional keyboard or mouse that has been around for decades. This Surface Hub wall includes a prototype interface that describes how Windows can become a portal to open new ways of working in the direction of enhanced collaboration. Imagine the appearance of a giant screen with all of your information, documents as well as your data, and all of which can be accessed in a news feed model. Obviously very convenient. Microsoft is doing the same thing for its Surface Hub 2 software, which is expected to launch officially next year, making Windows lighter and more web-based.

In fact, these ideas appear in every prototype scenario inside Microsoft’s Envisioning Center. The reason for this is because in this creative lab also contains another demo related to online multi-person meetings, a joint activity in any office, department, in any organization, any business. Surely many of us have encountered difficult situations in online meetings many times. Whether it’s a connection problem, a microphone problem, or just the basics of a live video call. Such situations in online meetings can be frustrating, leaving remote people unable to keep track of essential information, affecting the overall effectiveness of the meeting. 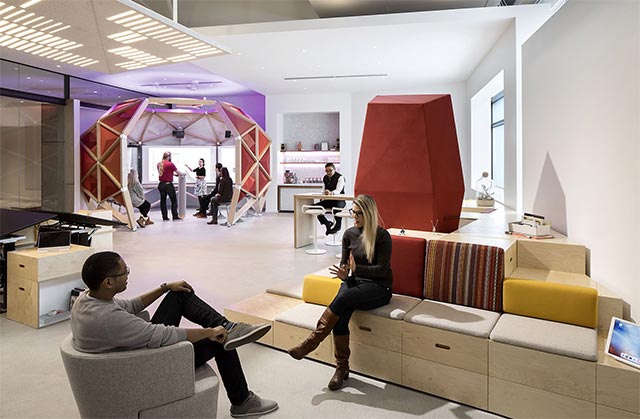 Microsoft hopes to tackle this problem neatly with a combination of sensors and cameras capable of better tracking what’s going on during a video call. With this in mind, the heart of a future online meeting will be a hardware system that can recognize meeting participants and use an artificial intelligence (AI) model to select and synthesizing all information, including gestures and words of everyone, thereby helping to minimize missing information in online meetings. There’s also a direct-copy service, built-in Cortana virtual assistant to help run meetings, and virtual reality interaction technology to make it easier and more effective for participants to interact with each other. .

Another big improvement of this demo is that it allows a meeting participant to reference the document, and that document is automatically transferred to the transcription feed of the meeting. Microsoft’s Graph platform will enable the connection of multiple services and devices, identify what documents are and can provide AI systems like Cortana. This can be seen as what Cortana is aiming for: Becoming a digital assistant that helps office workers create a more efficient work schedule with a focus on chat interactions.

Microsoft revealed earlier this week that it will allow international developers to access developer-specific hardware, thereby bringing these utilities closer to users in the future. near future. It seems that in just a short while, we will see Microsoft hardware systems, sensors filled devices appear more in every meeting, along with the efficiency of meetings. That will also be greatly improved.

The last demo we encountered in Envisioning Center was a special desk, or rather a giant touchscreen. If you noticed, Microsoft has started to direct users to this idea through devices like the Surface Studio. Microsoft’s idea here has to do with workspaces filled with giant touch screen computer systems. While the concepts above are primarily focused on scenarios to improve efficiency for each meeting, this prototype is where employees can collaborate more closely on a variety of documents, and incorporate data in Microsoft’s new Fluid Framework model.

By breaking the document into components (modules), Microsoft’s idea is to allow almost anything to be combined with just drag and drop. More broadly, an individual’s work can be linked into a single block of documents, and then Microsoft will use AI models to analyze images, text, and combine it all into one style. Only, that’s exactly how Microsoft is thinking about the Fluid Framework.

“It’s a basic architecture that can handle all kinds of data. You just drop a streamed video link into a document and it’s automatically copied, ”said Mike Morton, Fluid Framework program management engineer at Microsoft.

Microsoft is currently focusing its efforts on the web, and CEO Satya Nadella’s goal is to turn Microsoft into a more established business in web services. The latest success is the successful launch of the Edge browser platform based on the Chromium kernel almost 2 months ago. 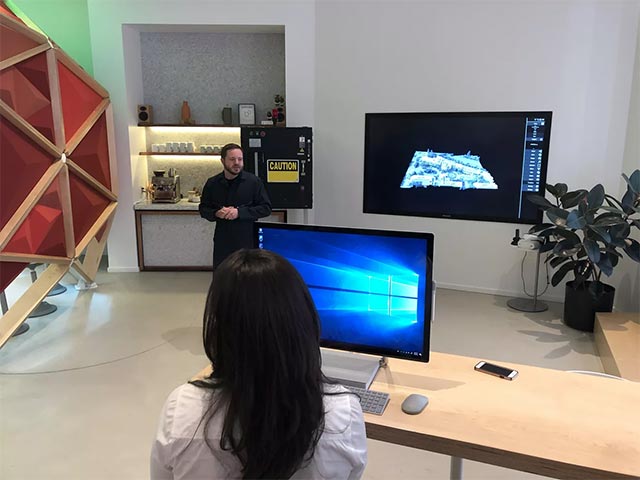 Microsoft’s challenge now is how to achieve that goal without making too much change for traditional customers who have been loyal to Office and Windows for years. In the past, Microsoft made a lot of hasty decisions for Windows 8, and now they are looking at tailoring Windows to various hardware systems more thoroughly. This plan involves a lighter version of Windows, known as Windows Lite, which eliminates many of the hassles of regular Windows, supports a more basic user interface, and can even focus a lot. more on the web platform as the company’s goal.

Microsoft didn’t say anything about Windows Lite during its Build 2019 conference earlier this week, but only spent time talking about more developer-focused features like Windows Terminal or kernel. Linux to Windows 10. In addition, we have seen Windows slowly transform, becoming a more basic platform on devices like HoloLens 2 or Surface Hub 2, and if Microsoft wants to make a strategic vision of the As well as the office utilities as well as the work outlined in the demos above, the concept of Windows will also have to change and adapt a lot in the near future. 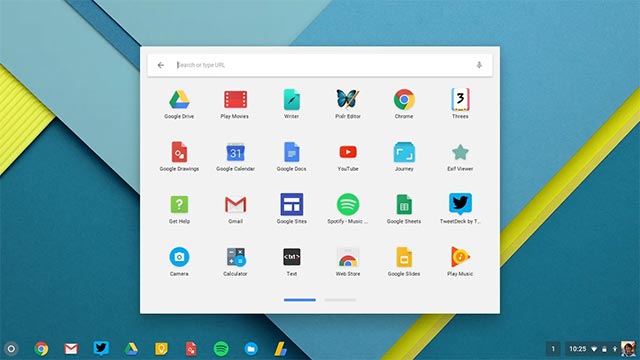 It seems that Microsoft is becoming more open to the concept of open source. Many utilities, Windows applications will be open source for the community to comment and contribute to improvement. The most recent is the case with Windows calculator and PowerToys and it appears that this will be a plan maintained by Microsoft in the near future.

Post Views: 113 After a series of rumors about the most powerful 4-cylinder supercar in the segment, Kawasaki Ninja ZX-25R was officially brought by the Japanese automaker. Tokyo Motor Show 2019 exhibition in the opening day. Attracting a lot of attention besides the Super Naked bike Z H2, the Sport bike does not seem to […]

4 ways to encrypt calls and messages on Android and iOS

Post Views: 42 4 ways to encrypt calls and messages on Android and iOS The secure messaging app will help you make a phone call or send encrypted text messages from Android and iOS smartphones to ensure absolute safety for confidential and sensitive information. Calling and texting are the main functions of the phone and […]

Post Views: 32 This is the selling price for the network lock version, portable from the Japanese market. They are sold as bare machines, without accessories. iPhone 7 and 7 Plus are being sold by a number of shops in Hanoi at VND 2.3 million and VND 4 million respectively for the 32 GB version. […]