Synopsis The four-year continental war between north, south, east and west is over.The girl, Violet Evergarden, who knew only to fight on the battlefield called “weapon”Quote-Wikipedia

The original is a light novel work.
Directed by Taichi Ishidate and produced by Kyoto Animation. 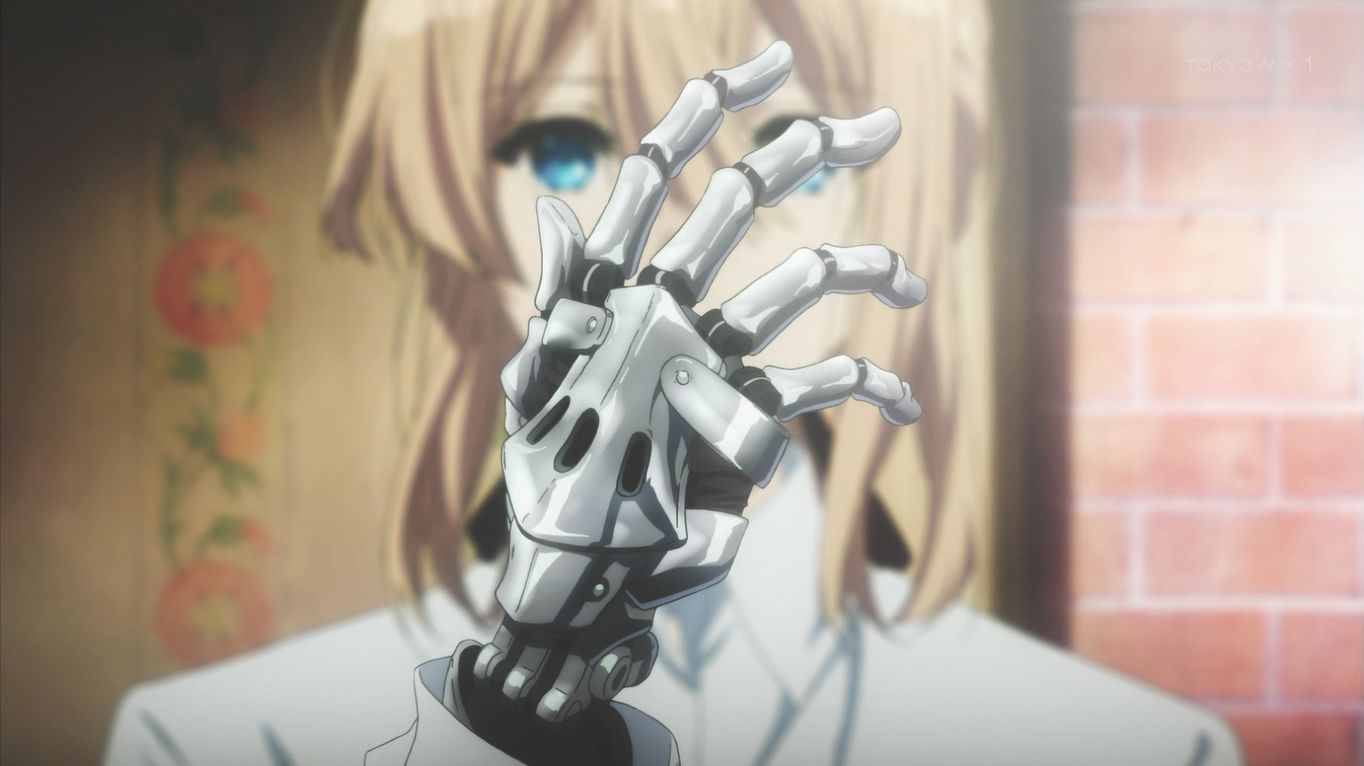 Episode I, the overwhelming drawing is done early.
A detailed depiction that draws from each hair to each eyelash,
Drawing up to the grain of the desk and drawing the exquisite transparency of black tea
It is a drawing that can be said to be “foreign” as a TV animation.

Of course, drawing is good, but
Is it necessary to draw so far in the broadcasting medium of late night anime?When
On the contrary, the depiction that is too detailed to make you feel that way
It must be called Kyoto Animation.
Although it is a TV anime, it has the same quality as a theater anime.

Exquisite shaking of the characters sitting on the sofa,
You can even feel the effectiveness of the cushion.
This overwhelming drawing forces the work in the middle
Swallowed by the world view.

What happens to war tools after the war 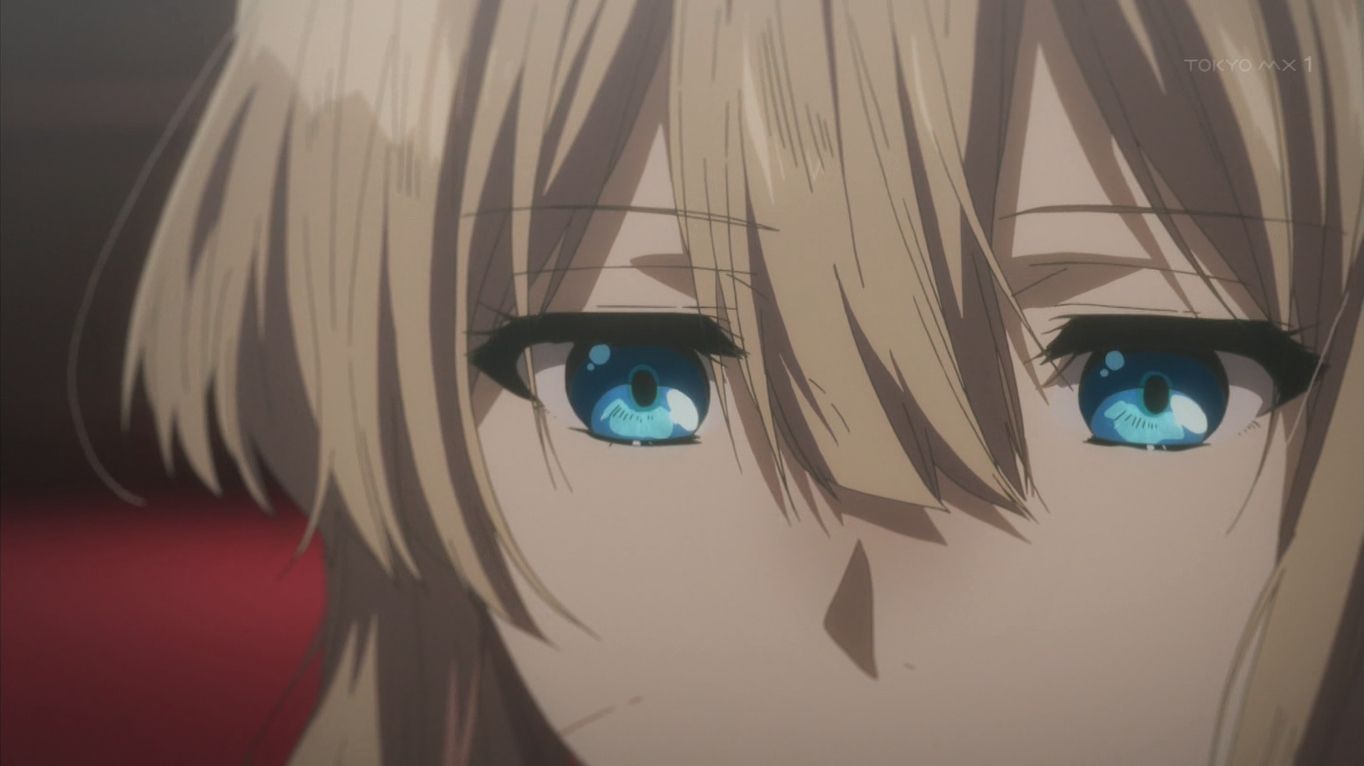 This work is very unique.
As the title “Violet Evergarden”,
The main character of this work is a girl named Violet.
She is a war orphan and once belonged to the army under the “major” as a soldier.
He fought as a tool of war and lost both arms.

How does she, who was a tool, live in a world where the war is over and peace is reached?
The “major” who gave me orders and gave me feelings close to favor
The whereabouts are unknown and he will not come to see me.

As she was told, she continued to fight as ordered,
A girl who thought she was useless except for the war
While working at a “postal company”, through people’s “letters”, touching the hearts of ordinary people,
The story is about changing.
This work is neither more nor less.

Even if you become a maid and your former enemies attack you,
Actually, even though I’m on a secret mission and protecting someone
There is some big secret in her birth,
There is no such grand story development.

Through a ghostwriting business called “automatic doll”
Understand the meaning of the last word of the Major, “I love you.”
It’s a simple story, and because it’s simple, it’s the emotional expression of the character.
Depiction is important.
The content that seems to be sober at first glance is enlivened with the vivid drawing of “Kyoto Animation”. 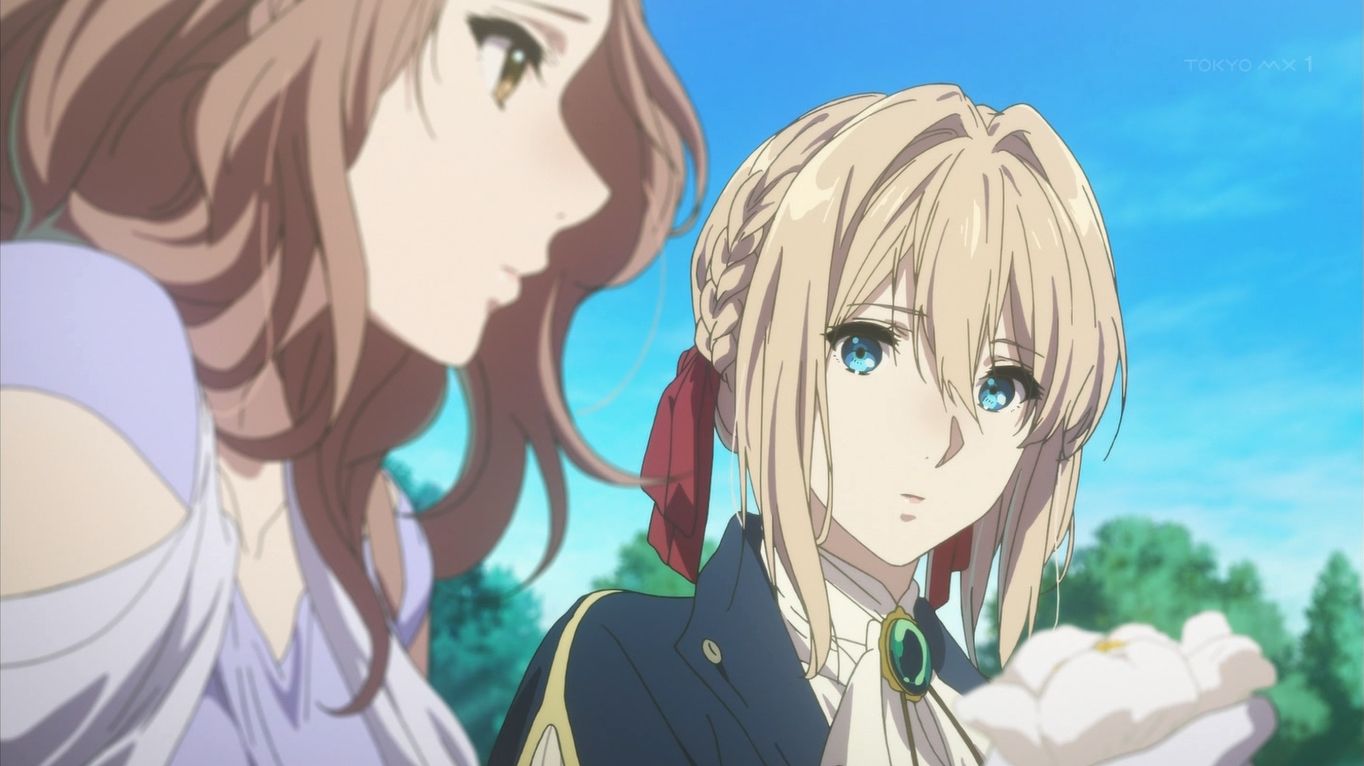 After the war, she left her loved one and lived only as ordered.
She understands people’s hearts through the ghostwriting business of letters, and she also changes.
This work is very simple.
Accumulation of the story of one episode leads to the change of the hero,
The innocent storyline makes you feel the impression that permeates the viewer.

Early on, she doesn’t understand human emotions.
That’s why I couldn’t understand the human feelings of the person who asked for the ghostwriting of the letter.
It really deals with it like a “doll”.
Because there are many people who can not write letters, read the client’s words and read
It must be a letter that conveys emotions.

Violet, which was a tool, could not read the client’s feelings and the true intentions,
I write it as it is, as the word says. It’s not all that people say.
Words are complicated, delicate and contrary.
Violet learns the “difficulty” of such a person.

She tries to understand the meaning of the word I love, the emotion itself.
She clings to it because it is the last word of “major.”
Not knowing that the Major isn’t coming back, she wants a connection with the Major.

People around her also care about her as a tool, and she hits words and emotions.
By interacting with people, dodging words with people, and witnessing people’s emotions
She also becomes a person. 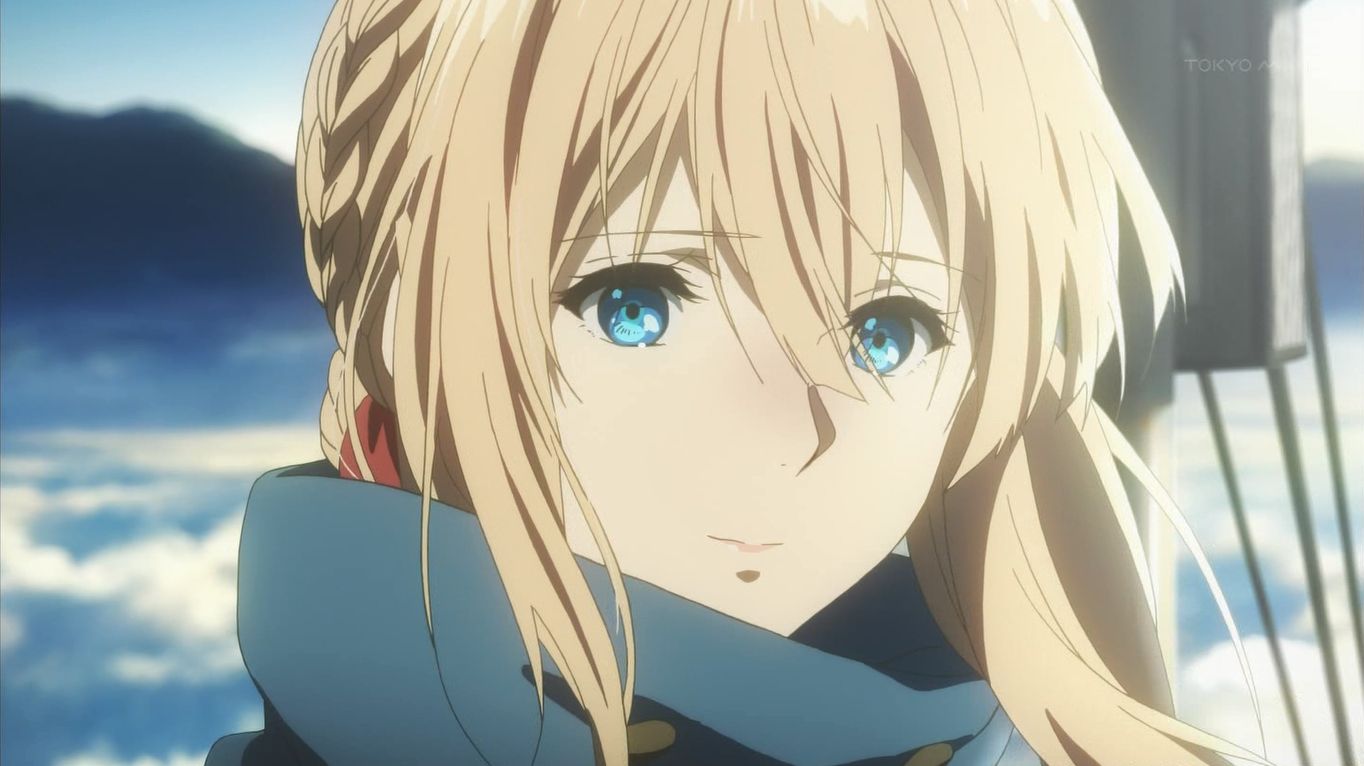 There are many single episodes after the middle stage,
It feels like reading a collection of short stories that complete one episode.
The coat color is a little different, but it’s a bit like “Kino’s Journey”,
He visits various places and the story is made up of letters for each episode.

Therefore, the story has been missed.
In order to fit the story of each story in the frame of 30 minutes per episode
The part that is too neatly organized is conspicuous, but it can not be helped in the medium of TV animation.
I’m tied to the shaku in both good and bad ways.

It seems that a lot of characters that are not in the original are added in the animation,
I haven’t mastered it even though I added it. 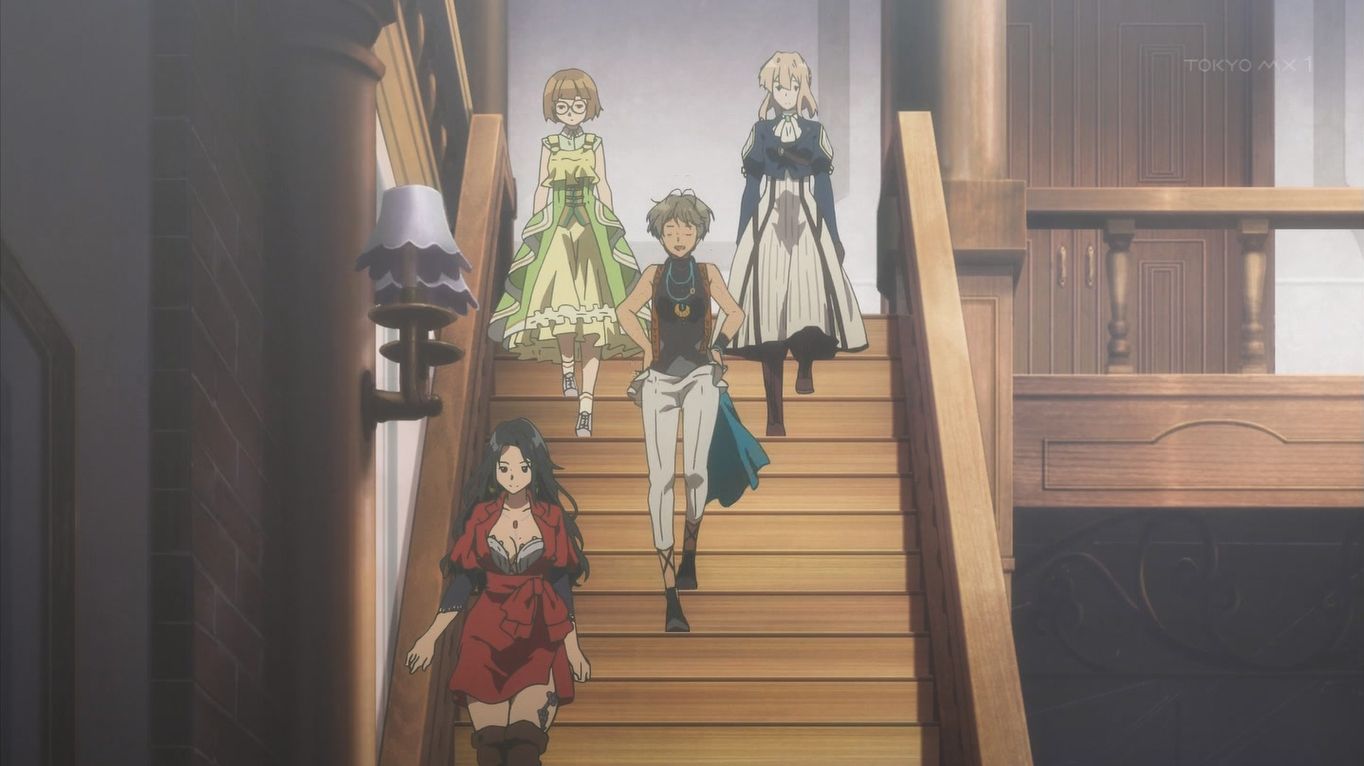 The story development is also quite abrupt.
Violet, who could only write stiff sentences up to episode 4,
In episode 5, I suddenly started writing the princess’s love letter.
Moreover, the love letter is also very good, and it makes me feel that I understand love.
This process of growth is too rapid and a little messy.

The episode around here is drawn in the EX episode of OVA of BD privilege,
An important episode that should be done in TV animation originally
Because I didn’t do it in the story composition of the TV anime
A feeling of strangeness has been born.

You can feel the polite growth description up to 4 episodes, but in 5 episodes
It’s a shame that politeness is lost.
There was a part where I felt that it would have been better if the latter half of the episode was in the early stages.
Even if it’s an episode of 5 episodes, maybe it’s a little late
If it was replaced with at least 6 episodes, the sense of incongruity might have decreased a little more. 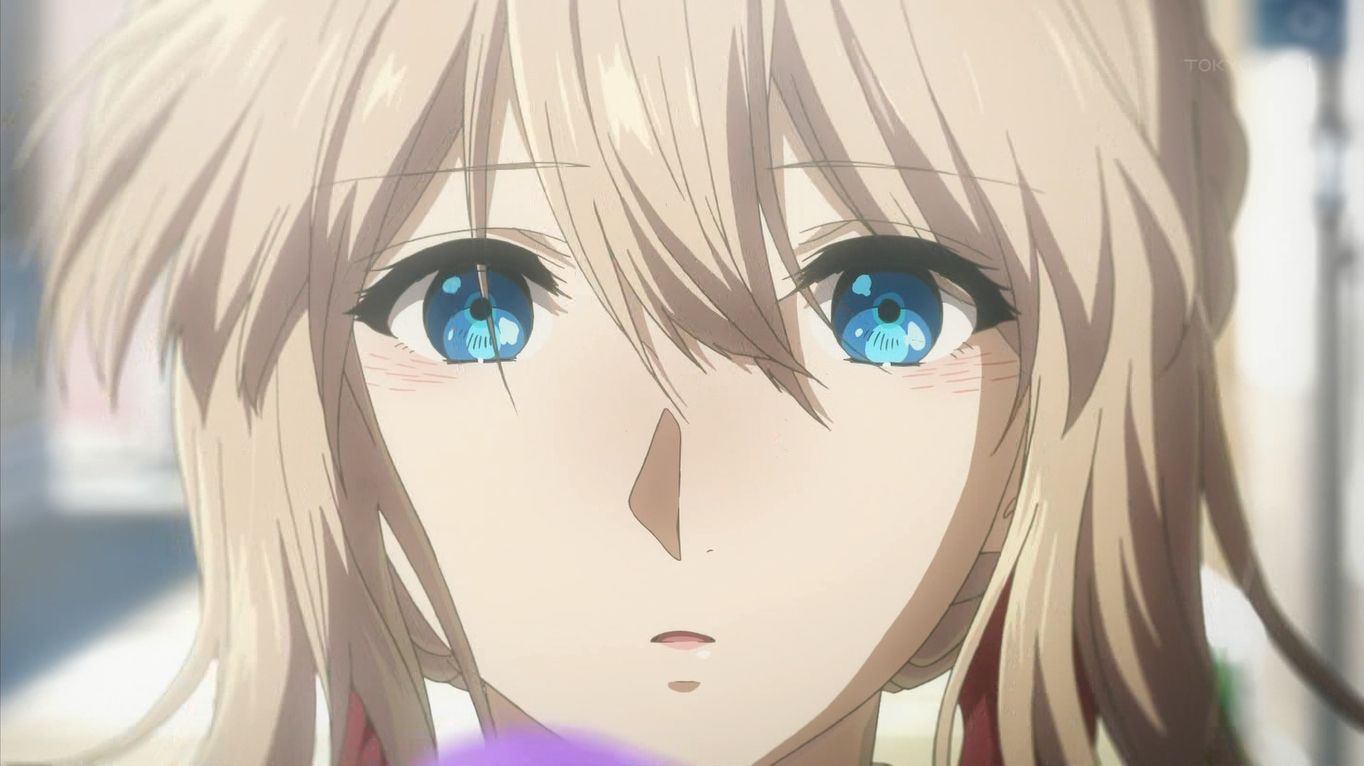 In the story of each episode, she learns various emotions and regains herself.
Sometimes love, loneliness, feelings for someone, empathy, loss.
The story itself that completes one episode is a story that regains her “emotion”,
As the story progresses, she becomes like a different person from her in episode 1.
From tools to people, we get emotions while interacting with people.

Each episode, one letter, one letter is a valuable experience for her.
Through such a precious experience, the emotions in her grow up, and it is transmitted to the viewer.
Sometimes a warm episode that stimulates the lacrimal glands is depicted.

Because I get emotions, I feel pain in my loss.
The loss of someone’s life in the war, the major lost in the war.
Her feelings are shaken strongly by knowing the truth that she does not want to know.

Unacceptable loss and unfulfilled thoughts remind me of those days.
The existence of the Major who tried to teach himself how to live as a person when he was a tool
For her, she is “I love you” and she has regained her emotions.
I feel strongly and I am overwhelmed. 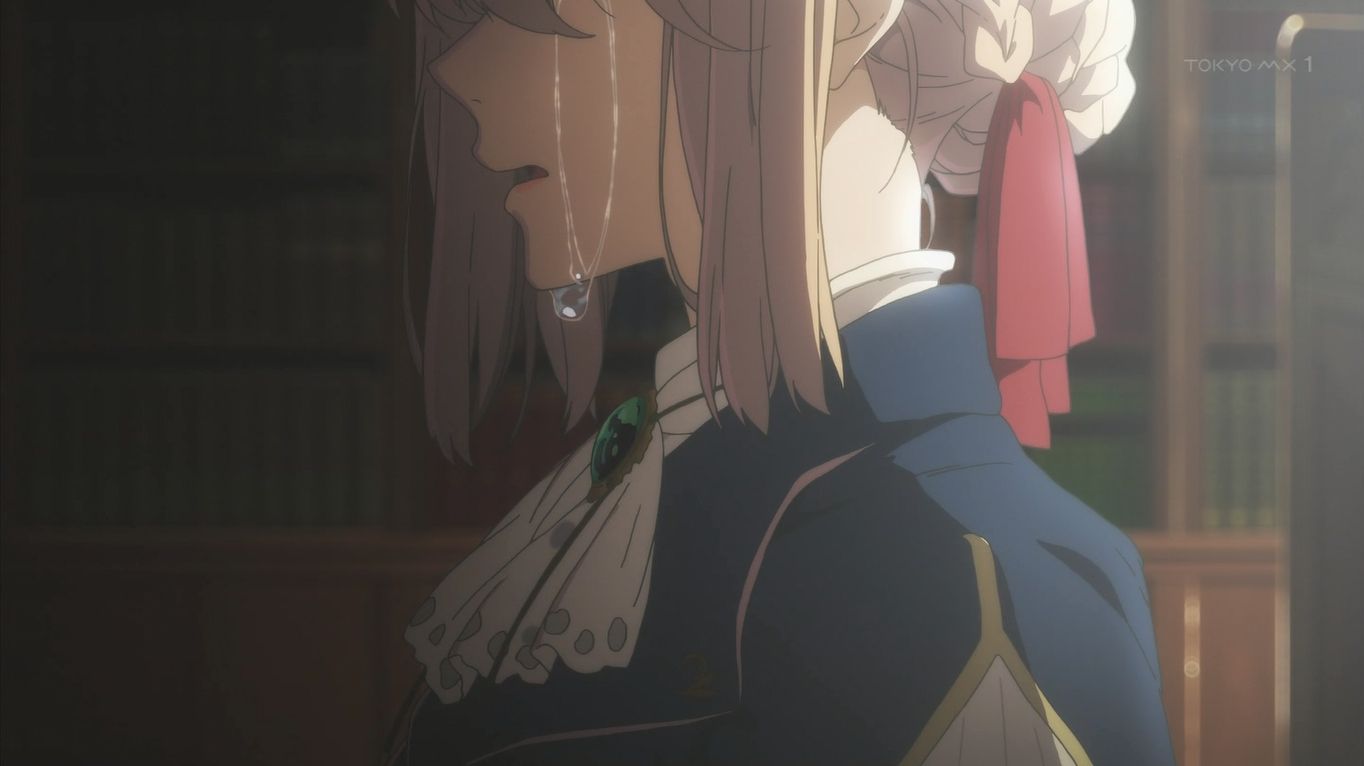 Realizing that she lost the Major, she also loses the meaning of “command” to herself.
She receives the letter in a deep and deep loss. Letters from people who have been involved with her,
I know in a letter what she got, thinking she had lost everything.
Seeing the people saved by the “letter” he wrote so far,
She establishes her existence and identity.

By realizing her name and the meaning of life, she became an “automatic clerk doll”.
Become a human being called “Violet Evergarden”.
Face yourself, face the past, and take a step forward without stopping there.

10 episodes from there. The request she received was a letter to the future for 50 years.
A letter written by my mother to my little daughter. It’s the only way to reach her 50 years from now.
Because she is becoming aware of “love”, she wrote a letter from her mother about her love for her daughter.
Can be spelled.

The little daughter is alone when her mother is gone. However, my mother’s life is sick and short.
The innocent cry of a girl who doesn’t know that, and her mother’s feelings.
A letter left because I realized “death” and a violet that spells it.
She cries because she also tasted someone’s “death.”

There is no longer the violet that was the tool of the first episode.
There is “Violet Evergarden” who knows emotions and love.
It’s a predictable story, but I cry.
The acting ability of the voice actor who plays the character, and the expressive drawing and directing are there.
Turn a predictable story into a crying story 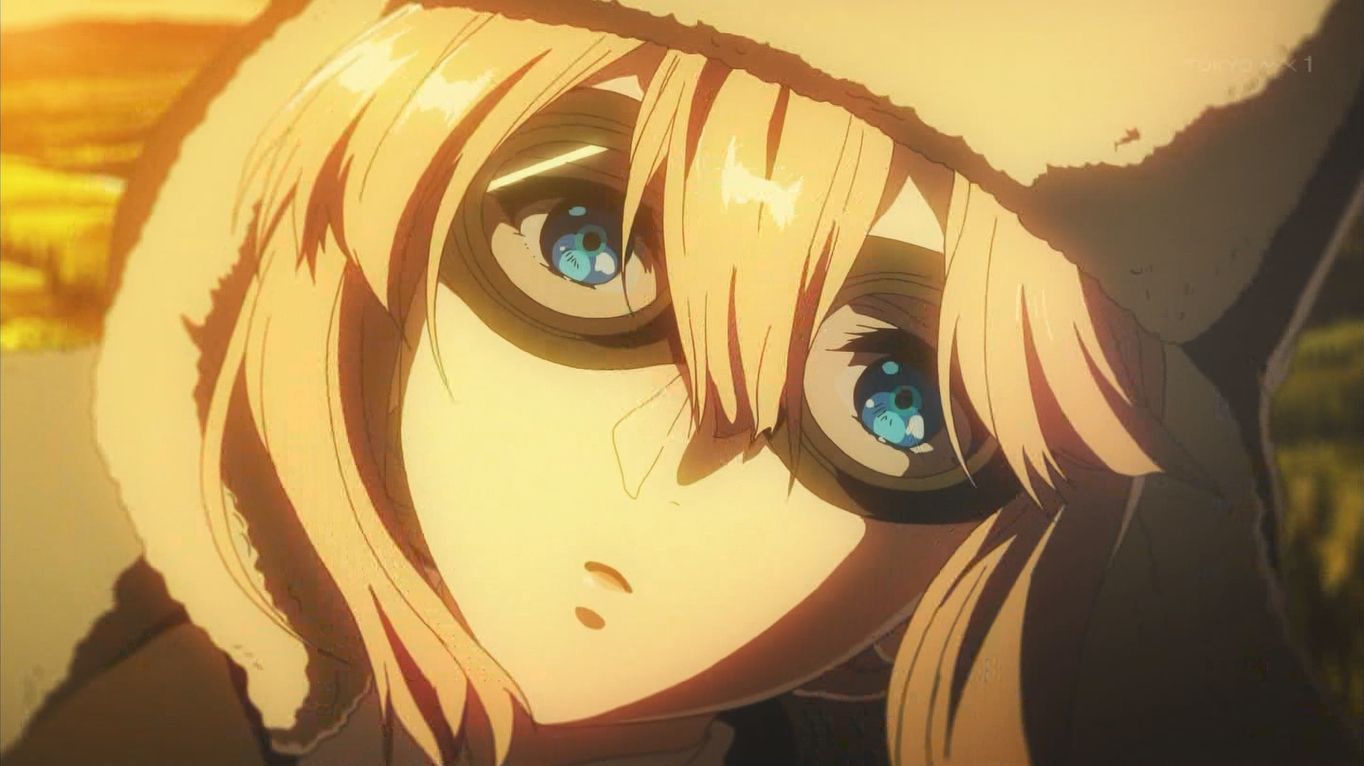 However, at the end of the story, the story composition is a drag.
As for the story, Yamaba was greeted with 10 to 11 episodes,
The following episodes 12 and 13 are, to put it plainly, snake legs.
In the anime, the content of the original has been modified considerably, and its influence has appeared in the final stages.

Originally in the final episode, she “reunites”.
1 Cool and beautiful girl named “Violet Evergarden”
Although I should have been able to draw the story, it is a development that stretches.
Probably the production of a new episode has also been decided,
It is a modification of the original “to stretch”. You can see it by looking at it.

The battle depiction of “Violet” also has a lot of ramblings and excess parts,
It’s a pity that the tsukkomi of this work was conspicuous at the end of the game. 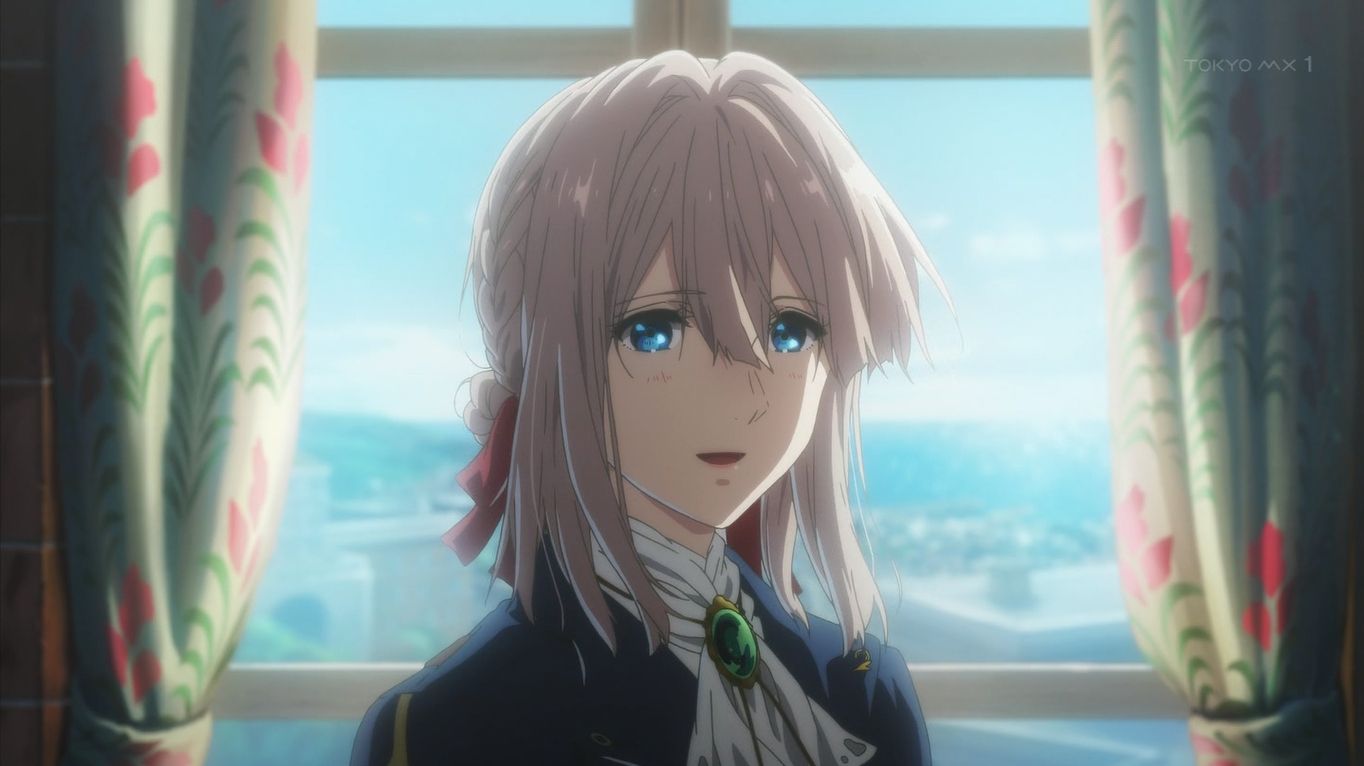 Overall, the goodness of the “drawing” of this work supports various parts.
A girl who has been ordered by a war orphan leaves the battlefield
The story of growing up as a human being, seemingly plain content,
With a beautiful drawing atmosphere and a production that shows emotions with fine movements and facial expressions
The work is such that the lacrimal glands are sometimes tickled.

The story of the accumulation of episodes one by one tells the growth of a girl named “Violet”
While making me feel, suddenly several months have passed,
The story at the end of the story, which makes you feel stretched, must be said to be a drawback.

Many characters haven’t mastered it well,
I understand that it is drawn by modifying it from the original in various ways,
After investigating, many of the dissatisfactions I wrote in this review seem to be the modifications (bitter smile).

The character of the character itself and the depiction of the relationship between the characters have also been deleted.
The part that feels strange if you modify it so much,
The abruptness of story development is born and I feel it is natural.

The original is a label published by Kyoto Animation called KA Esma Bunko.
The same “Beyond the Boundary” is also the same director on the same label,
It has been modified in the same way.

As a result, what the director wants to do, ignoring the “consistency” of the work,
What you want to show comes first, and the fun that the original will have
It hasn’t been transmitted to the viewer clearly.
When a director-type person supervises, a common phenomenon has occurred.

Although the goodness of drawing and the acting of the voice actors obscure such drawbacks
It’s a waste to feel that at the end of the game or at the beginning of episode 5
It was a work that I felt. 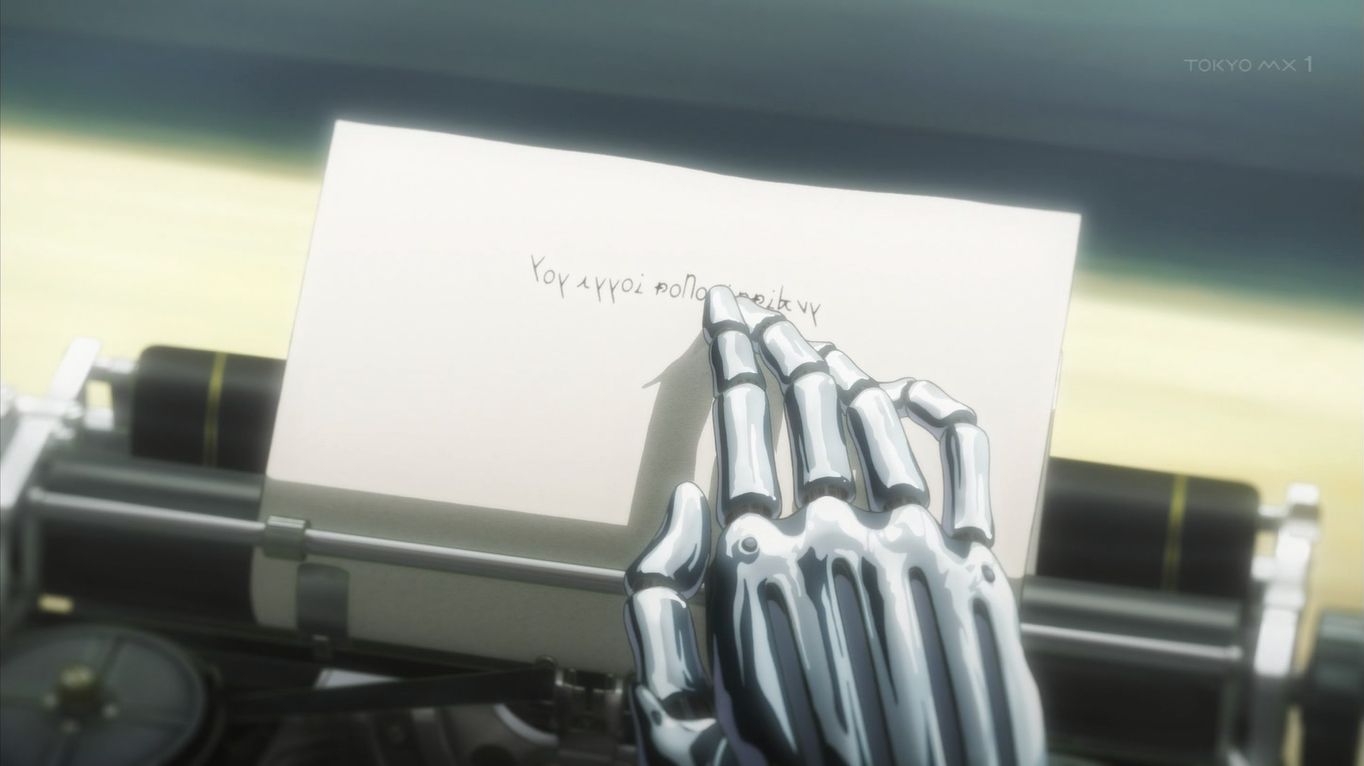 It’s a personal digression, but 10 episodes were done.
It was a predictable development and the content was as expected,
It is cowardly to have “Ayako Kawasumi” read the letter.
The letter in that voice and in that situation
No one will be able to tickle the lacrimal glands.

As of 2020, it is being produced as a gaiden and a movie version,
I hope that the discomfort and shortcomings of the TV anime version will disappear.