A number of Adayroi's suppliers have revealed on social media that they have suddenly received an announcement about the suspension of sales on this e-commerce platform since 6pm on December 17.

According to the disclosed documents, the reason that Vincom Commercial General Services Joint Stock Company – the operator of Adayroi gives is 'wishing to evaluate and restructure the company's operations to better meet the needs of the market and customers in the new development period' should suspend all sales activities on this e-commerce platform since 6pm on 12/17.

Along with that, in order to serve the restructuring, all goods and services of Adayroi suppliers under the signed contracts will be stopped from selling and distributing to customers. Products that have been successfully ordered by customers on this e-commerce platform before December 17 are still delivered and applied the cancellation, exchange and return policy in accordance with agreements and commitments with suppliers.

The document of Vincommerce also stated that the company will complete the payment to the supplier under the contract on January 15, 2020. Adayroi's suppliers need to issue valid financial invoices on December 25 for this e-commerce platform to complete the debt settlement by December 31 at the latest.

However, according to VnReview.vn at 9:00 am this morning (December 18), some products of suppliers can still place normal orders on Adayroi. Currently, the media group of VinGroup has not yet responded to the closure of the Adayroi and promises to have an answer soon. According to the suppliers, it is likely that the information they received was not that Adayroi completely stopped working but only temporarily to prepare infrastructure for a merger deal. 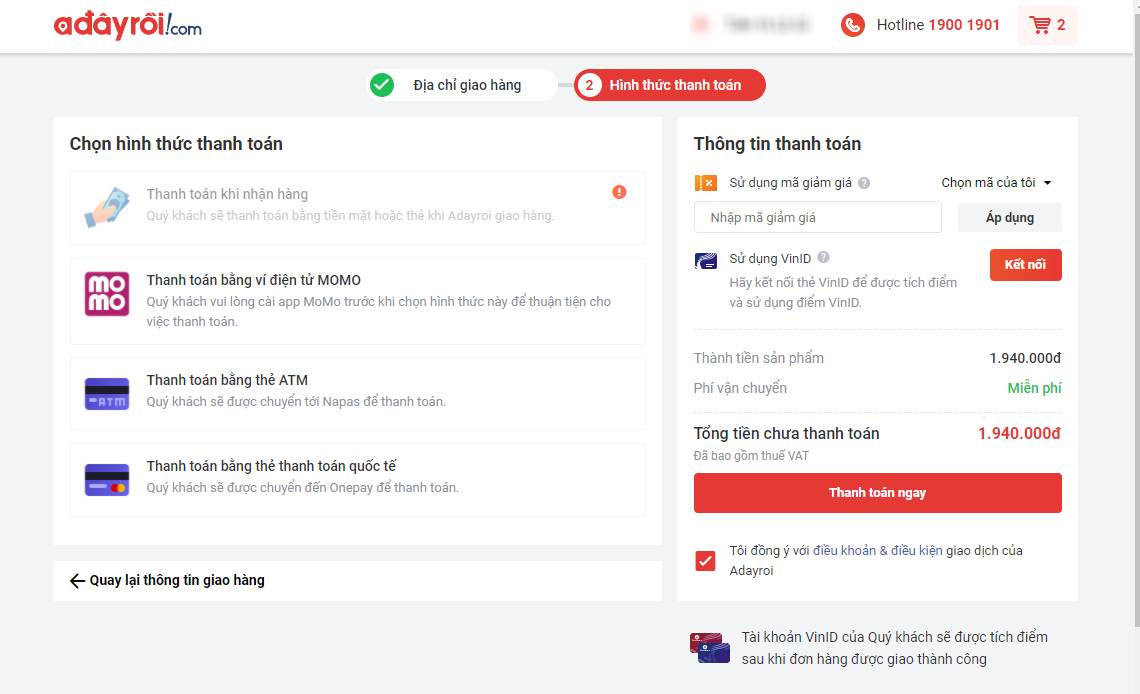 On this morning (December 18), some products on Adayroi are still in normal order

Information about the closure of Adayroi came shortly after Vingroup announced the transfer of Vinmart, Vinmart + and VinEco farms to Masan. Vincommerce e-commerce floor has an average of more than 6 million monthly visitors in the third quarter of 2019. This number is much lower than the leading e-commerce platforms in Vietnam such as Lazada, Shopee, Tiki or Sendo.

Adayroi is an e-commerce website of VinCommerce General Commercial Services Joint Stock Company, a member of Vingroup and put into operation in 2015. After a few times of separation, the charter capital of the trading floor This e-commerce is currently 50 billion.

Since its establishment, Adayroi has always been in the top 5 largest e-commerce platforms in Vietnam along with Lazada, Tiki, Shopee, Sendo. However, since 2017, when competitors have continuously poured tens of millions of dollars and expanded their business, the information about Adayroi has been very limited. Almost only when the leadership changes or is split, this e-commerce platform 'floats' back. This silence is part of the average monthly traffic of Adayroi that is severely declining and is currently only about 1/4 – 1/5 of the four main competitors.

Post Views: 59 Just launched but vivo S1 Pro has quickly "liked" many young people thanks to the outstanding features. Vivo S1 Pro had an impressive "welcome pitch" with a spectacular launch showcase on 6/12. This brand new rookie promises to be a formidable opponent in the mid-range segment with many significant upgrades. Especially for […]

Withdrawing from the mobile wireless market, Intel is planning to bring patents to auction

Post Views: 21 According to a new report from IAM, Intel seems to be planning to auction patents related to its wireless mobile connection. It is known that this plan was introduced by Intel after deciding to withdraw from the 5G smartphone model business last April. Previously, Intel stopped researching and developing 5G modem technology […]

Post Views: 36 TOP best animated movies on Netflix Netflix is ​​a leading high quality movie streaming service in the world. With thousands of special movies and TV shows, divided into different categories such as romance movies, cartoons, action movies, … This is an application not only for adults but also for small children to […]