The GeForce RTX 3090 series of GPUs are currently one of the most expensive graphics cards on the market, but that hasn’t stopped many miners from using it as buffering, due to the effects of its shortage GPU continuity lately. And with the Ethereum price boom, this cryptocurrency mining has gained in popularity over the past few months, resulting in a number of pretty impressive and surprising systems.

According to the technology page Techradar, one of the most noticeable groups of “buffalo plows” recently created by a group of cryptocurrency miners in Vietnam.

The build is discovered and shared on Twitter by the account @I_Leak_VN, with video footage of a virtual money mining system with GPUs embedded in a barrel of mineral oil for cooling. There are no detailed parameters of the temperature or voltage being used due to the rather blurred image quality of the video, but it seems the system is working and running some GPU tuning software.

“Obviously dissatisfied with the use of a cooling fan or even a water cooler, these people chose to submerge eight RTX 3090 GPUs in a barrel of mineral oil”, review page.

The video also surprised the international community by the uniqueness, willingness to play and pay for the group of virtual money miners in Vietnam.

“How does this system work? Are they frying GPUs?”commented one Twitter user.

“Sadly, it’s uploaded directly by a legitimate hardware retailer. They don’t care about gamers anymore”, another person discovered that the video is related to a hardware equipment distributor in Vietnam.

Mineral oil cooling is a fairly effective cooling method for computer systems, especially cryptocurrency mining systems that always operate at high capacity. It has a number of outstanding advantages over water or air cooling systems in that the user can ensure all the ingredients are cooled consistently and the mineral oil transfers heat up to 5 times better. compared with air. All mineral oil in the engine tank will be pumped to the fan system to reduce the temperature.

Essentially, mineral oil has been shown to extend the life of PC components – a key factor for crypto miners trying to get the most out of their investment. Especially when this is the best way to keep parts like the GPU running longer.

Although this system is quite efficient and surpasses traditional heat dissipation, it is because of the complexity and the requirement of an oil solvent that is always clean, and the case of the computer being always sealed makes the application of oil immersion. components are difficult to deploy in a universal way. In fact, only experienced modders dare to do this pretty bold thing. Oil soaked components are also difficult to clean or resell in the secondary market.

Many people also noticed in the video that the GPU area in the oil is not closed, even someone stirred the solution with their hands. This is said to be an extremely irresponsible act that could adversely affect the system, or it could be a video recording before replacing the “buffalo plow” system. 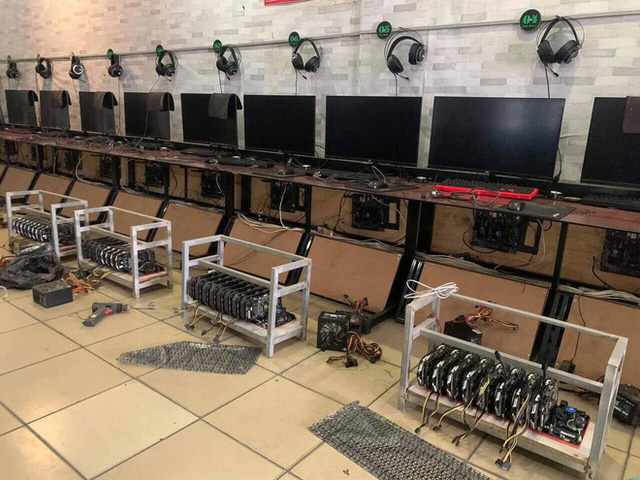 The image of Internet shops in Vietnam turned to mining for higher profits than receiving customers.

Recently, the virtual currency mining community in Vietnam has repeatedly surprised the whole world. Most recently, many major technology sites in the world such as TechPowerUp, WCCFTech or Tom’s Hardware have posted pictures of some Internet service / online game shops turning their model into … mining. Surprisingly, when investigating the origin of these images, they are actually not far away but from Vietnam.