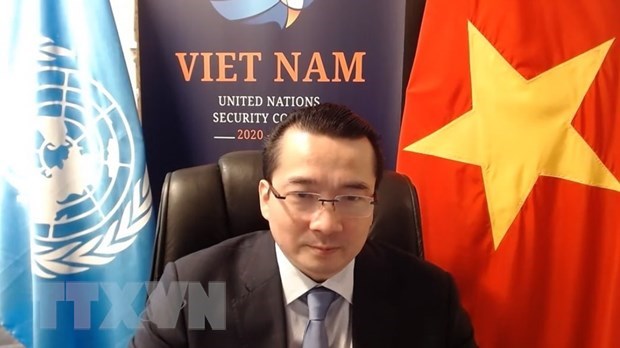 According to the Vietnam News Agency at the United Nations, on February 10, United Nations Security Council met online to listen to the 12th Secretary-General of the United Nations on the threat terrorist element The self-proclaimed “Islamic State” (IS) threatens international peace and security.

The Vice President in charge of the United Nations Office on Counter-Terrorism (UNOCT) Vladimir Voronkov and the Assistant President and Director of the Executive Agency counter terrorist (CTED) Michèle Coninsx reported the meeting.

Here Vietnam has emphasized the need to strengthen regional and international cooperation, eliminate favorable conditions for terrorism, block funding for terrorism, and assist the country in timely detection and containment. block terrorist plots.

Ambassador Pham Hai Anh, Vietnam’s Interim Representative, expressed concern about the continued increase and complexity of IS terrorism amid the difficulties caused by the COVID-19 pandemic. The Vietnamese representative affirmed that the comprehensive and sustainable solution to this issue is economic development, building a culture of peace, promoting national reconciliation, and strengthening the capacity of communities to combat the threat of violence. extremism and terror; reaffirming Vietnam’s commitment to international cooperation in the fight against global terrorism under the UN’s joint coordination.

Deputy Secretary-General Voronkov said that the COVID-19 pandemic does not increase the risk of terrorism in the short term, but increases the root causes of terrorism in the medium and long term, and scatters attention. and countries’ resources for long-term counterterrorism plans. He emphasized that IS has been taking advantage of the instability caused by the COVID-19 pandemic to propagate terrorist ideology, undermine national governance, recruit and raise terrorist funding, towards pepper resumes operations in Iraq and Syria.

Assistant Secretary-General Coninsx said that after being knocked out of the last controlled territory, IS is now redirecting and stepping up its operations in Africa; The activities of IS and its neighboring organizations in Africa are exacerbating the humanitarian situation in the region.

The reporters urged countries to tackle the humanitarian situation of tens of thousands of people, mostly women and children, held in prisons in Iraq and Syria on suspicions of being IS terrorists and to avoid the risk of security risks and long-term extremism.

Speaking at the meeting, members of the Security Council expressed concern about the trend of IS taking advantage of the instability caused by the COVID-19 epidemic and tending to resume operations in conflict zones, most Iraq, Syria and African countries, inciting terrorism in many countries outside the conflict zone such as Europe; calls for the root causes of terrorism to be fully addressed, including the economic problems caused by the COVID-19 pandemic; emphasizing that anti-terrorism measures must comply with international laws, including humanitarian law, international human rights, with the participation of the whole society./.