Recently, a video clip was cut from the journey camera of a car moving on the road when an accident caused many people to care. Perhaps the main concern is for the “handsome” dressed in a white shirt because he had a good car chase before rushing into the head of this ill-fated car. 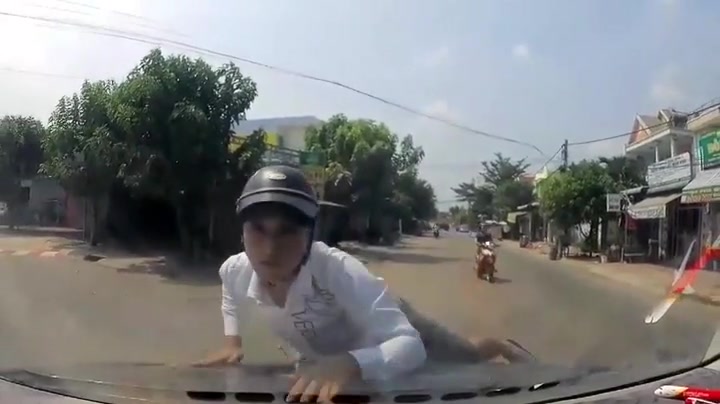 The video clip recorded the incident of a motorcycle in a car on the morning of April 19, 2020

Accordingly, the incident occurred at about 10 am this morning on April 19, 2020, at a time when the driver of a car was turning left when he suddenly encountered a young man riding a motorbike in the opposite direction. Unable to control the speed, the young white shirt man brake suddenly, causing the car to skid and crash into the head of the car. The blow was quite strong, causing the young man to hit the bonnet but fortunately only slightly injured and led the motorcycle on the sidewalk shortly after.

Photos cut out from the video clip of the accident on April 19, 2020

The clip immediately after being posted immediately attracted attention and caused netizens to stir up a stir. Most people believe that the big mistake belongs to young men who ride motorcycles because they have gone at high speed, so they cannot control the steering wheel. However, some people think that a car driver making a left turn is also somewhat wrong in the above situation. And what do you think?

Top 100 outstanding brands 2018: The time of the brave brands

Post Views: 54 What can we learn from the world’s leading brands? What makes the difference between good and excellent brands? The answer is that they are brave enough to change and adapt to market fluctuations. The world of brand is constantly moving. We now receive up to five times more information every day than […]