Although it has been out for a few months, Sony’s latest console – PlayStation 5 is still a console system that is being sought after by the gaming community around the world in recent times. Since officially opened for sale, PlayStation 5 has created a real fever in the international and domestic gaming community. When owning this console is almost impossible due to the number of items so rare.

Specifically, on May 23, on his personal Facebook page, striker Nguyen Van Toan shared on social networks a photo of his close roommate Nguyen Cong Phuong holding a gaming system that many games have. Vietnamese players wish to own. The two are in the hotel and Cong Phuong is staring at the newly bought PS5 and it seems that he doesn’t know how to set up the system yet. Seeing that, Van Toan took a picture and shared it on his story: “The room just bought an air purifier but can’t install it”. 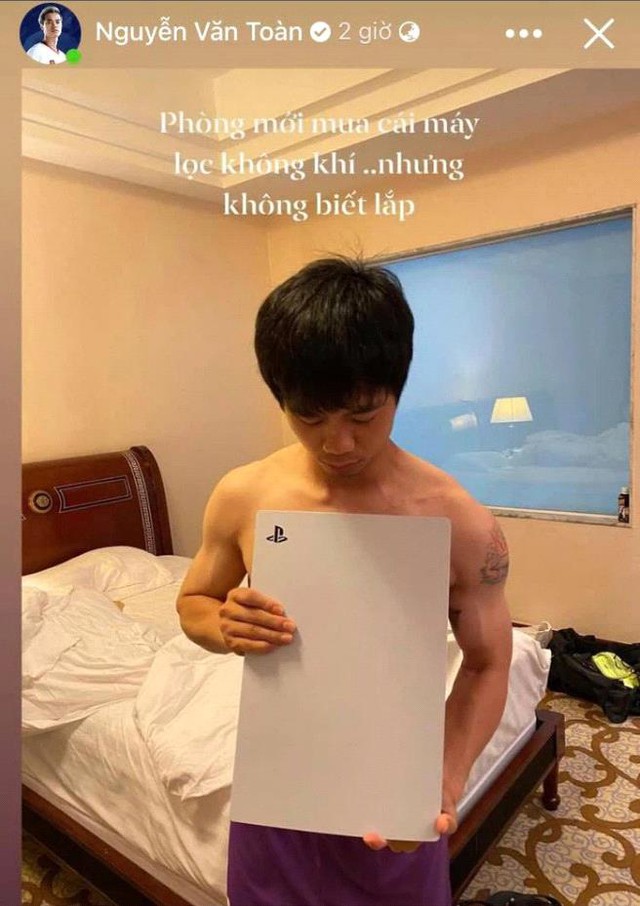 It seems that Van Toan, Cong Phuong and many other men are hiding from their wives in front of the expensive item they just bought when many fans guess that Van Toan’s implication about the “air purifier” is the way to go. said to help Cong Phuong hide from his wife that he bought this PS5 for entertainment. A fan shared: “I don’t know if my sister knows this legendary PS5, I plan to hide it from Ms. Minh (To Ngoc Vien Minh – Cong Phuong’s wife – PV)”, “Let Minh install it for you”… Some other fans wittily said: “This is a mini-fridge, what’s wrong with it here”, “I thought it was a wi-fi transmitter”,…

It is known that Cong Phuong and Van Toan are currently at the hotel where the Vietnamese team is stationed during the focus on preparing for the 2022 World Cup qualifiers. To ensure safety against the epidemic, the players can only live closed activities. Closed in the hotel space and practice daily, limit contact with outsiders as well as leave the hotel premises during rest time. That is also the reason why Cong Phuong and Van Toan must immediately buy Sony’s latest PS5 game console to be able to play famous football games like FIFA or PES, both for practice and for entertainment. mind.

Through this image, we can see how hot the PS5 is when it is not only sought after by the Vietnamese gaming community, but also famous people like players Cong Phuong and Van Toan also own PS5.