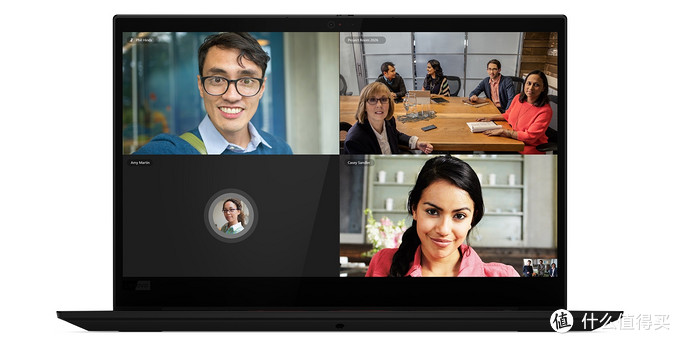 There is no change in the appearance design, or a low-key minimalist black design. The fuselage is made of patented aviation-grade carbon fiber material, the texture of the A side is beautified, and the X1 word is added to the ThinkPad LOGO to make it very recognizable. The screen can still be rotated 180 degrees. The new generation is equipped with a 15.6-inch IPS screen, a 4K resolution version is available, the screen color gamut and other details have not been disclosed, only the brightness of 600 nits.

The internal configuration, the official did not disclose too much, only determined to be equipped with Intel’s tenth generation Comet Lake-H series of high-performance processors, up to the Core i9-10980HK, memory and storage has not been disclosed, it should be similar to the previous generation. The graphics card was slightly upgraded from the previous GTX 1650 Max-Q to GTX 1650 Ti.

In addition, the new generation has added WIFI6 wireless, and can also choose 4G LTE (Cat.16) module. It is reported that it is equipped with a higher quality speaker. The expansion on both sides includes: full-size HDMI, two USB-C, two USB-A, an SD card reader, a 3.5mm, and Lenovo’s proprietary power interface, not sure whether it supports Thunderbolt 3.

It is understood that the third-generation ThinkPad X1 hermit is scheduled to be launched in July, starting at $1,749 (approximately 12,300 yuan). The domestic version is estimated to be as fast as August, and the price is expected to be higher. Professional users who need top office design books may wish to and many more.

Now that we have two Galaxy Notes, can we get one with a flat display?

Post Views: 32 This article may contain personal views and opinion from the author. The Galaxy Note family has doubled in size and now consists of two models: the regular Note and a Note+. And unlike the Galaxy S phones that are almost identical aside from the size, the differences between the two Notes are […]

The criteria I use when choosing to buy a laptop

Post Views: 47 -> Sometimes when I am often asked by my relatives or friends to choose a laptop, these are the criteria that I use. This applies to both Windows and Mac, regardless of the vendor. Please refer. Note: this article does not apply to gaming laptops or you need to make movies, graphics, […]