M-ATV and AGMS armored vehicles are used by US special forces during patrols in eastern and northern Syria.

The Pentagon announced in late October that it would deploy many armored vehicles and troops to protect a number of important oil fields in northeastern Syria. Just a few days later, images appeared on social media showing that the US military was using two armored models to perform this task.

The video published on November 3 shows three Anti-ambush Vehicle (M-ATV) used by US troops to patrol the area around the oil field in al-Hasakah province a day earlier.

M-ATV was developed by the US Oshkosh Defense Corporation on the basis of the Medium-Range Alternative Tactical Vehicle (MTVR) platform. Oshkosh Defense began making A-ATVs in 2009, after the US Department of Defense ordered a model of anti-personnel armaments that could work in rough terrain with poor roads in Afghanistan.

M-ATV is powered by a 7.2 liter Caterpillar C7 turbodiesel engine, which can reach a maximum speed of 105 km / h with a range of about 510 km. The inside compartment of the vehicle can accommodate up to 11 soldiers with two rows of seats facing forward and two rows of seats facing each other that can be folded at the back. The middle row of seats can be converted into racks for machine gunmen.

It is equipped with an integrated anti-mine system that deflects and absorbs the energy of explosives from self-propelled mines and UXO to protect the crew.

The second type of armor used by U.S. troops to patrol Syria is Land Mechanized Armored System (AGMS), the uncommon type of armored equipment for US special forces. Images of this vehicle were posted on Twitter by the CNW account when he met a US military convoy near Qamishli city, northeastern Syria. The convoy is believed to be carrying the American delegation to meet with Kurdish government representatives in a city near the border with Turkey. 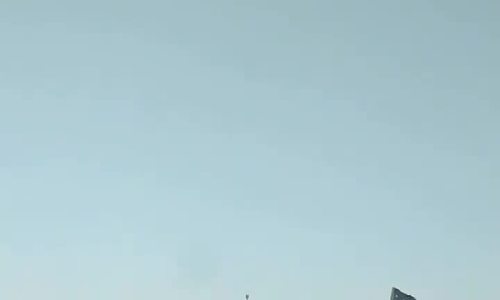 The 6×6 AGMS anti-mine armored vehicle is made by Austria on the basis of the armored Pandur armored vehicle, which can be deployed in a short time to provide strong fire support for special operations. The AGMS is equipped with a 12.7 mm M2 machine gun or 40 mm Mk.19 automatic grenade launcher, which can fight off enemy explosive devices and electronic warfare devices.

AGMS speeds up to more than 96 km / h, carrying nine soldiers, including a captain and a driver. The AGMS operating in Syria has a raised cockpit with thick armored glass, which helps drivers have a good view when operating at high speed.

The US military received the first AGMSs in March 2000, some sources said that Delta task force and the US 75th commandos regiment were deployed to about 20 AGMS armored vehicles. About 12 AGMSs manufactured by General Dynamics Land Systems are in service of SOCOM.

U.S. armored convoys are patrolling northern and eastern Syria after the Pentagon announced it would maintain a force to protect oil fields from the self-proclaimed Islamic State (IS) remnants. A US patrol team was attacked by pro-Turkish Syrian rebels (FSA) on November 3 but did not suffer damage.