This is the first time that VnReview has compared in detail two horizontal washing machines from the two brands with the largest market share in Vietnam. A company equipped with many modern technologies, and a company following a more “traditional” style.

The two products we have compared this time are LG AI DD FV1450S2B horizontal washing machine and Electrolux EWF1023BESA washing machine. The two machines have similar washing weights, 10.5kg with LG and 10kg with Electrolux, suitable for families of 5-6 people or more. The genuine listed price of the two machines is also equal to 20 million VND and the actual buying price at retail systems may be several million VND cheaper depending on the place of sale.

First, we will compare the designs between the two products. The first obvious difference is the design of the LG looking more square, the details of the wash program adjustment knob made of light-colored metal and the flat-designed tempered glass door with a modern, luxurious direction. Meanwhile, the Electrolux, the slightly convex front and the familiar “traditional” style sunken glass doors. 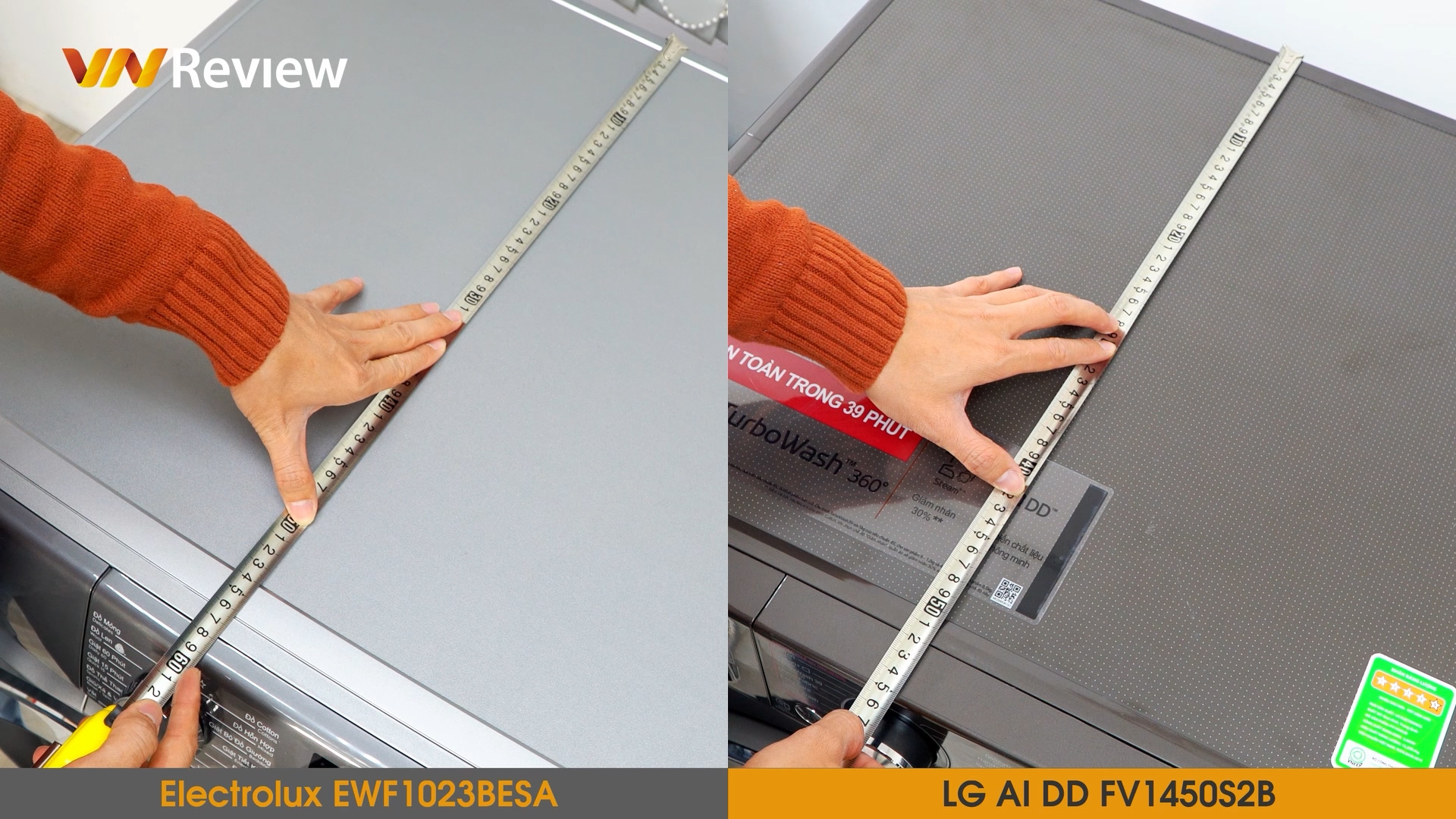 The size of the LG is slightly more compact despite having a more than 0.5 kg washing weight. Actually, the two machines are similar in width and height but the depth of Electrolux washing machine is 5cm longer. This is not a big difference, but it will be worth considering for users who plan to install the device in tight spaces. 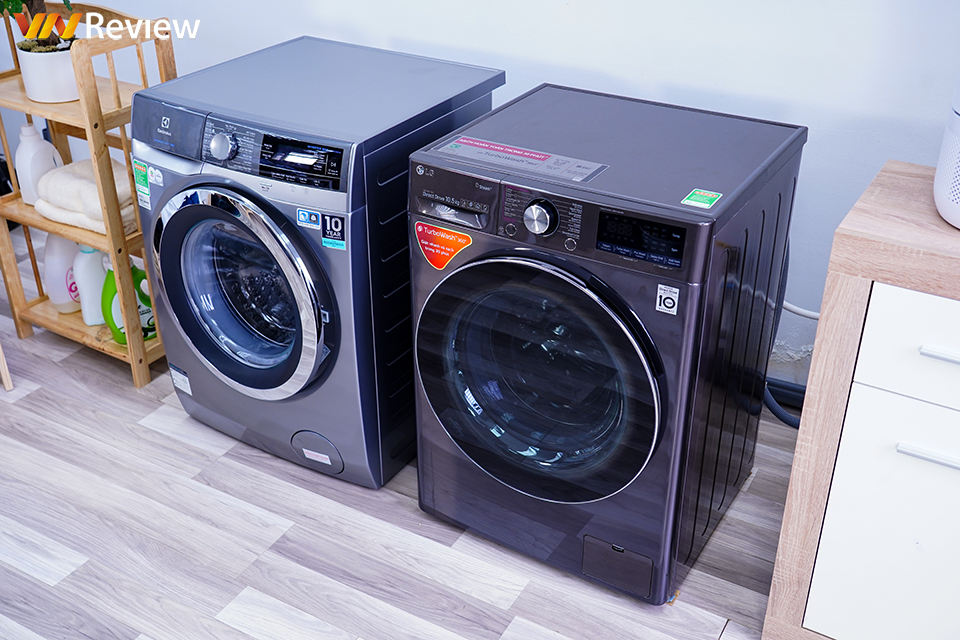 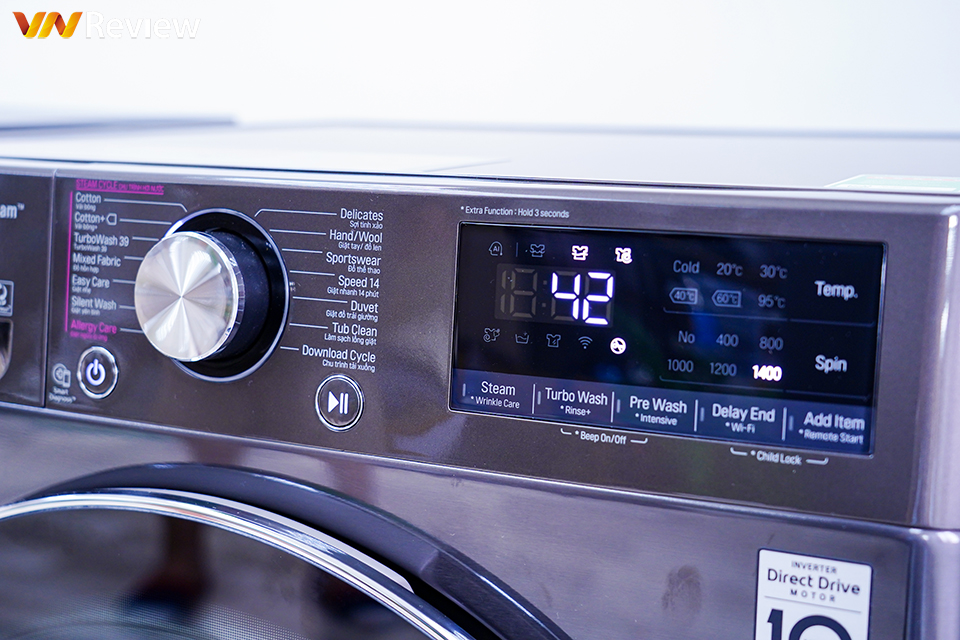 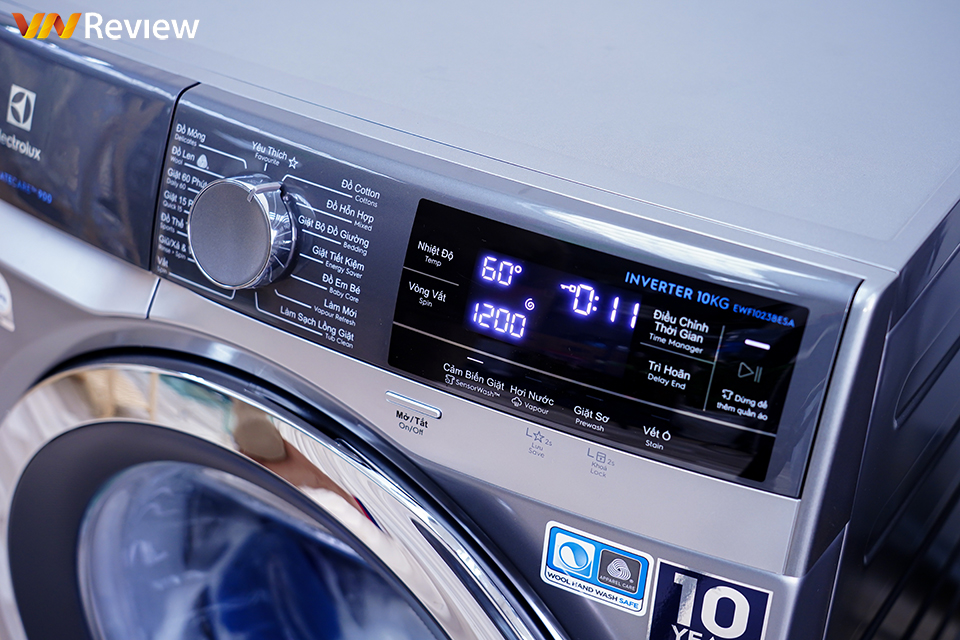 On the dashboard area, the two machines have an infinite knob and a sharp display. However, the beveled panel design and the size of Vietnamese words describing the washing programs on Electrolux washing machines are larger, making it easier for users to see. 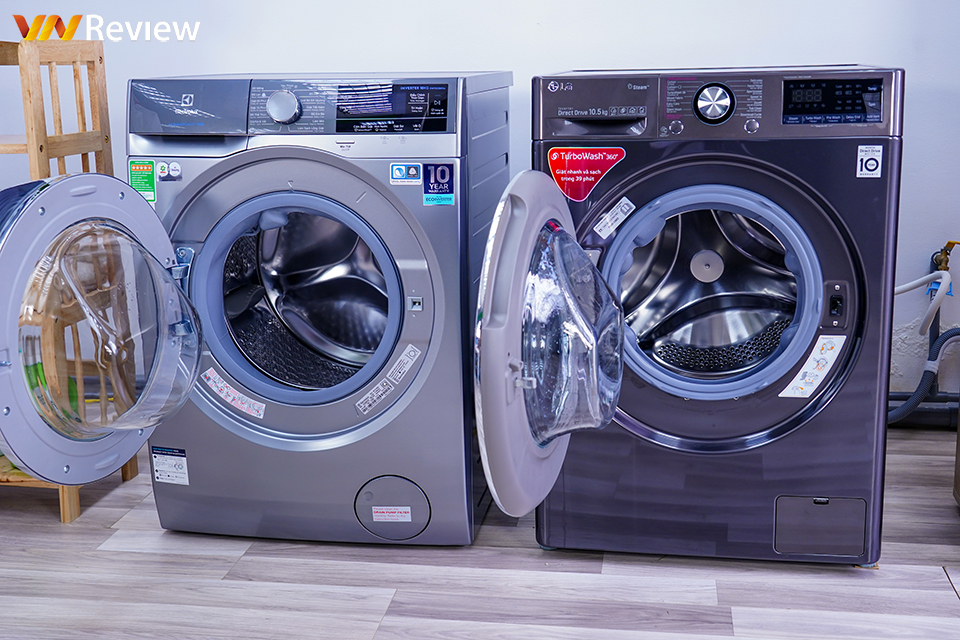 Thus, in terms of design and materials used for washing machines, LG has scored one point ahead of the competition. Not to mention the LG washing machine also has the ability to control from the phone through the Smart ThinQ application, a feature not available on Electrolux products.

Open the machine to compare from the inside 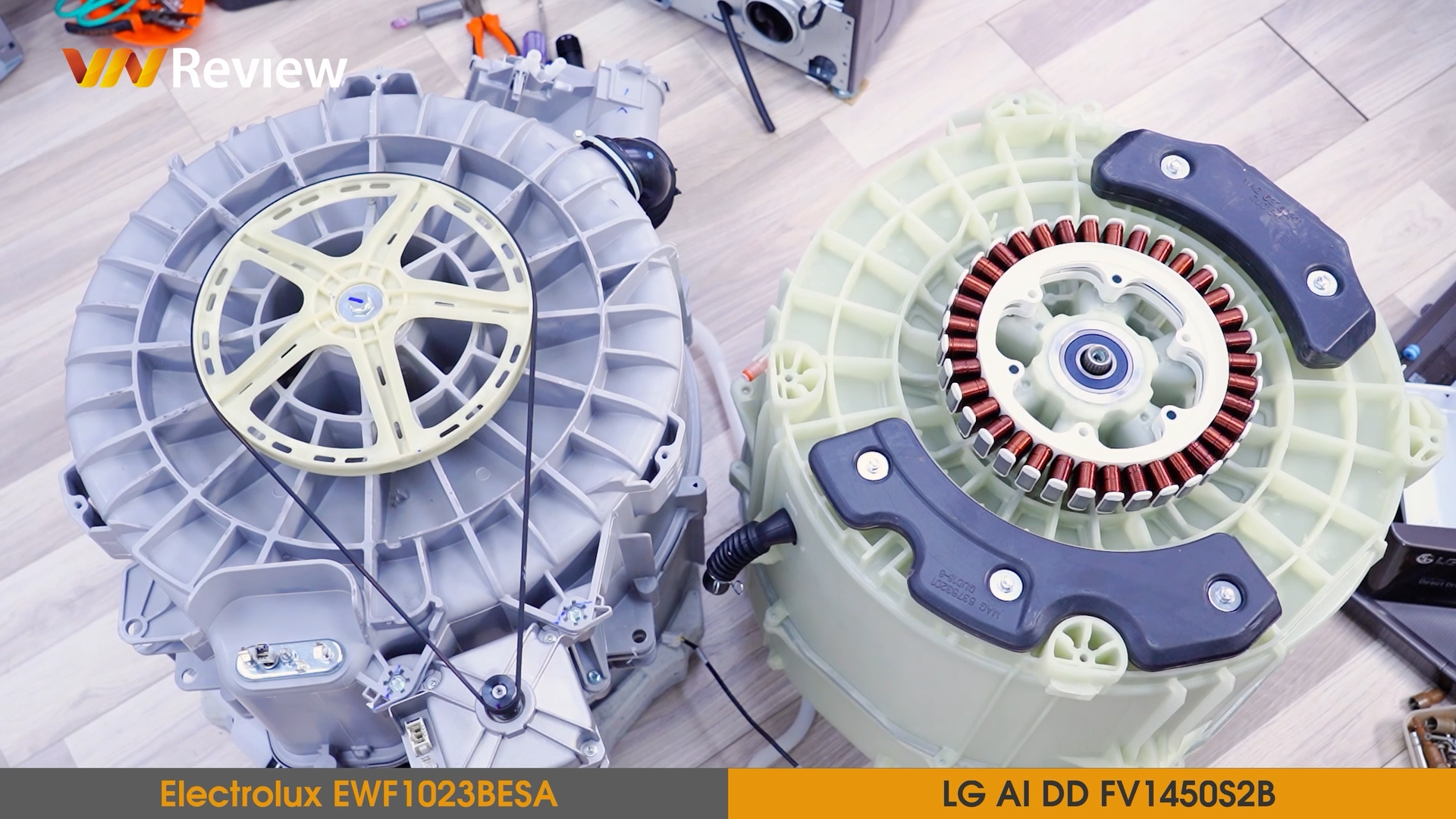 On the inside, the biggest difference between the two is the washing engine. LG washing machines use a direct drive motor, while Electrolux uses a traditional belt drive motor. 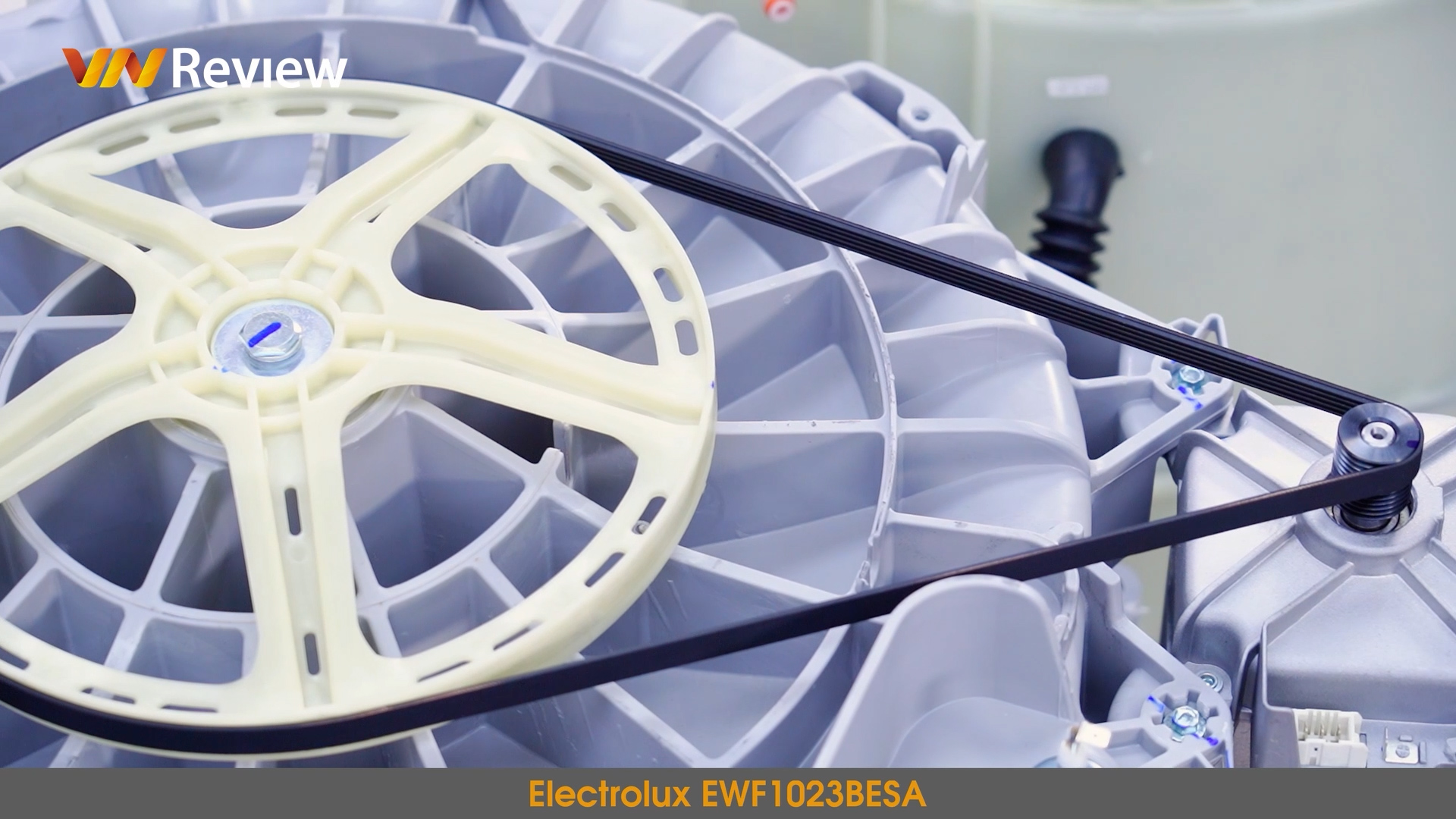 In a belt-driven washer, the spin of the drum is done through the belt between the motor of the washing machine and the drum. 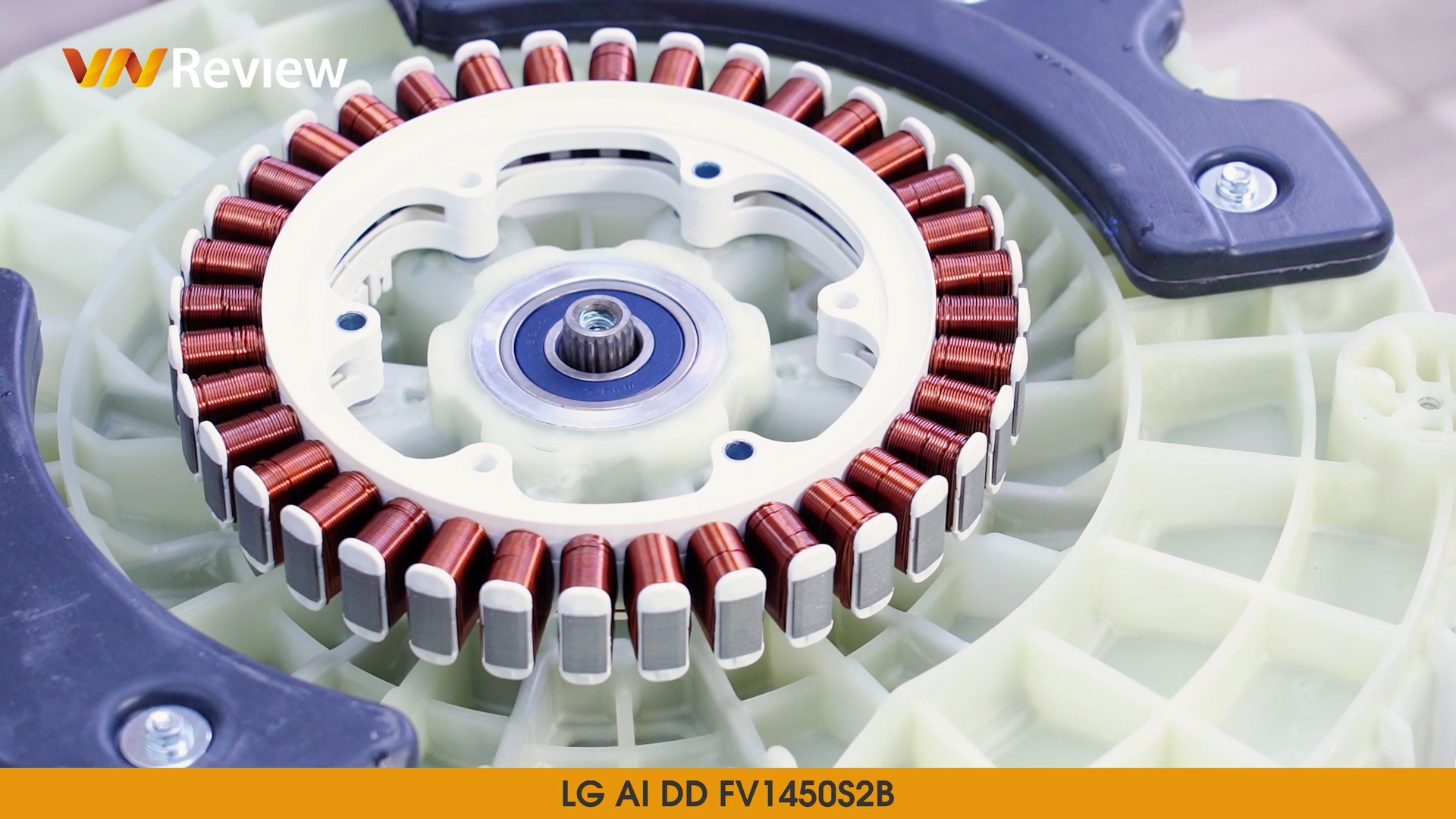 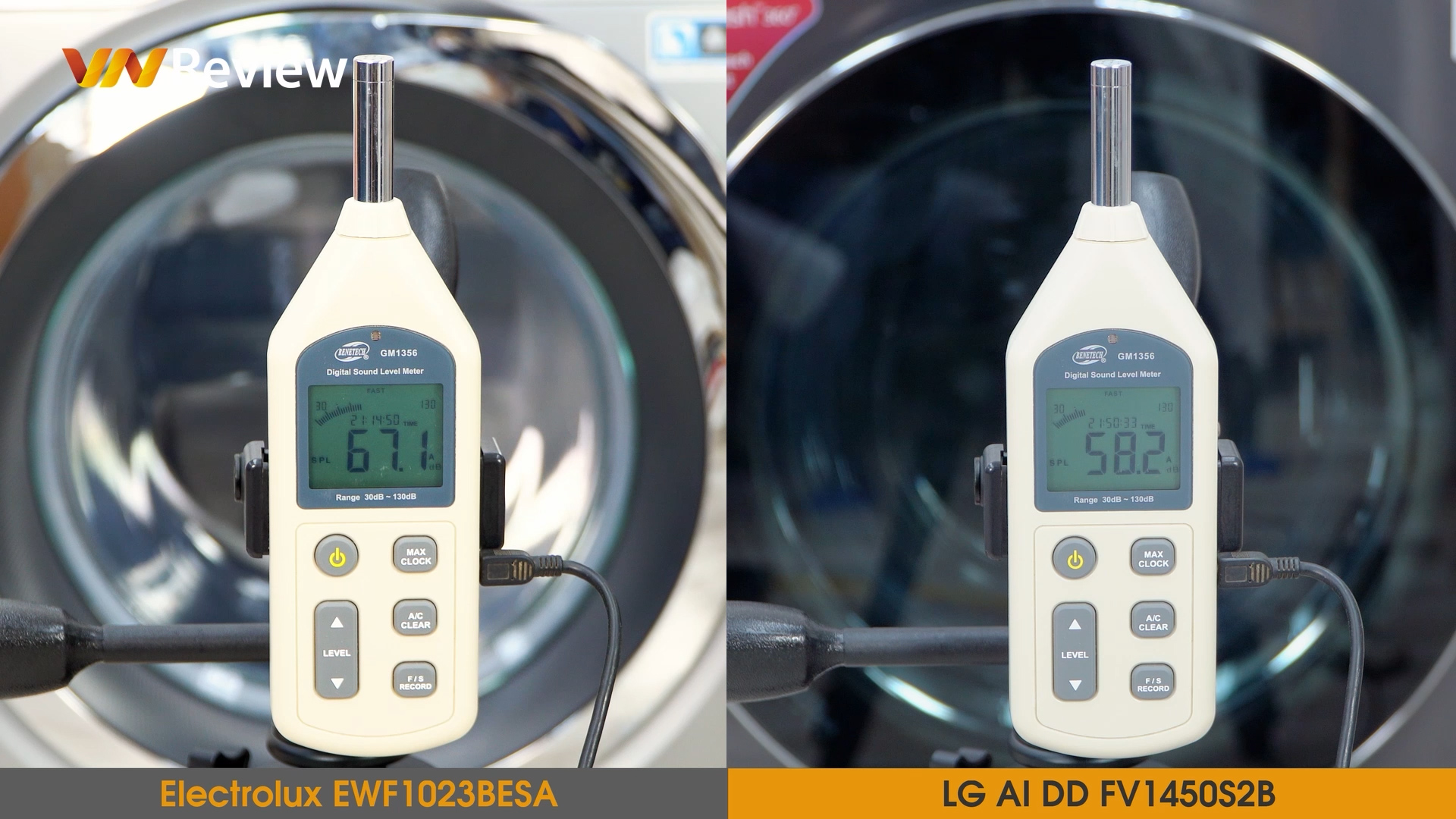 The image of the machine also explains the reason why the Electrolux machine is 5cm thicker than the LG washing machine. That is the amount of space required to place the belt behind the drum horizontally on the machine body. 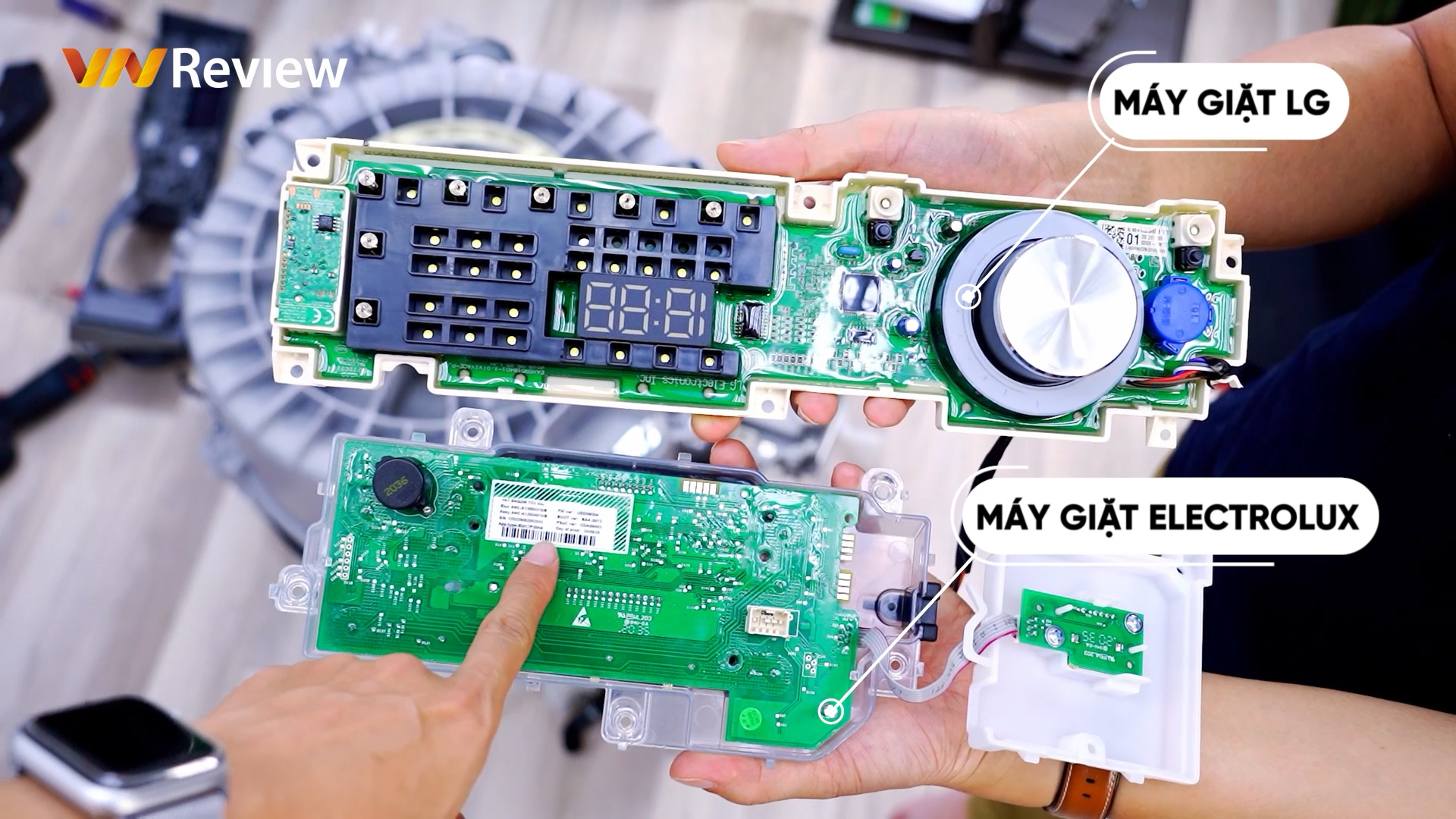 Circuit board on 2 washing machines

In many other details, LG also showed more meticulous. The company pours moisture and water-resistant adhesive for both the main circuit board of the washer and the display control board, while Electrolux only applies water-resistant adhesive to the main circuit board, while the display control board is bare. so it will be more susceptible to being affected by lower humid environments. In addition, pouring the glue also helps to limit the risk of a circuit board fire caused by geckos or other small insects. 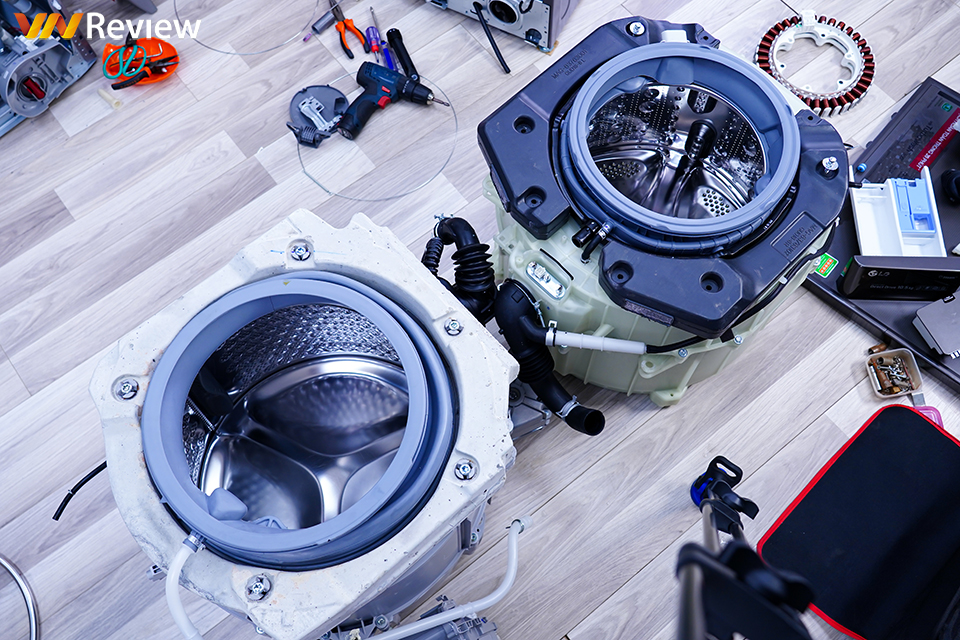 As a horizontal drum washing machine, both products use concrete to prevent vibrations for the drum. Maybe because the motor uses a belt, the Electrolux washing machine is reinforced with more concrete around the drum and the concrete mass is much larger than LG. During the actual washing, we found that the vibrations of the two machines were similar, proving that Electrolux effectively countered the vibration caused by the motor of the belt. 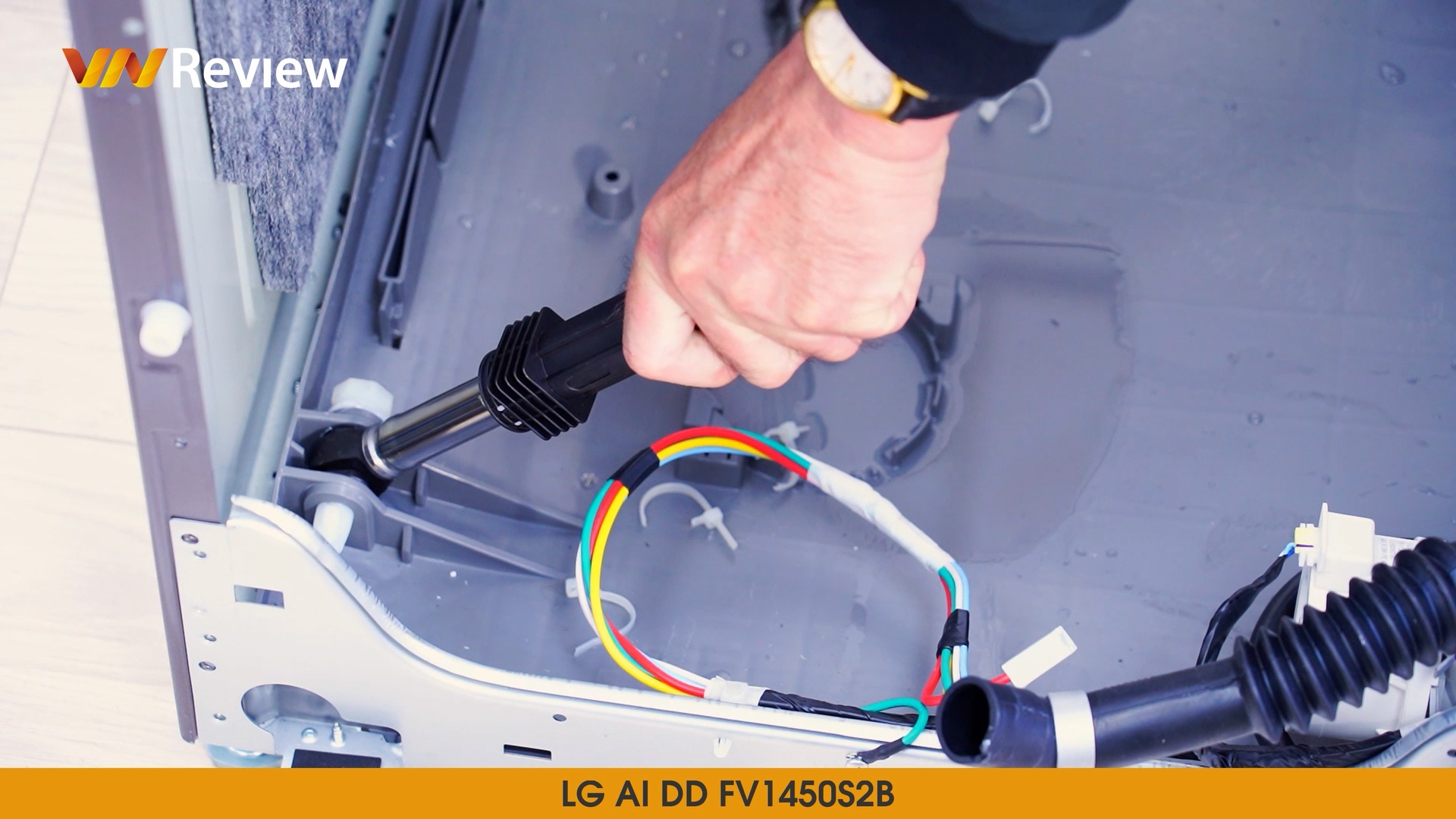 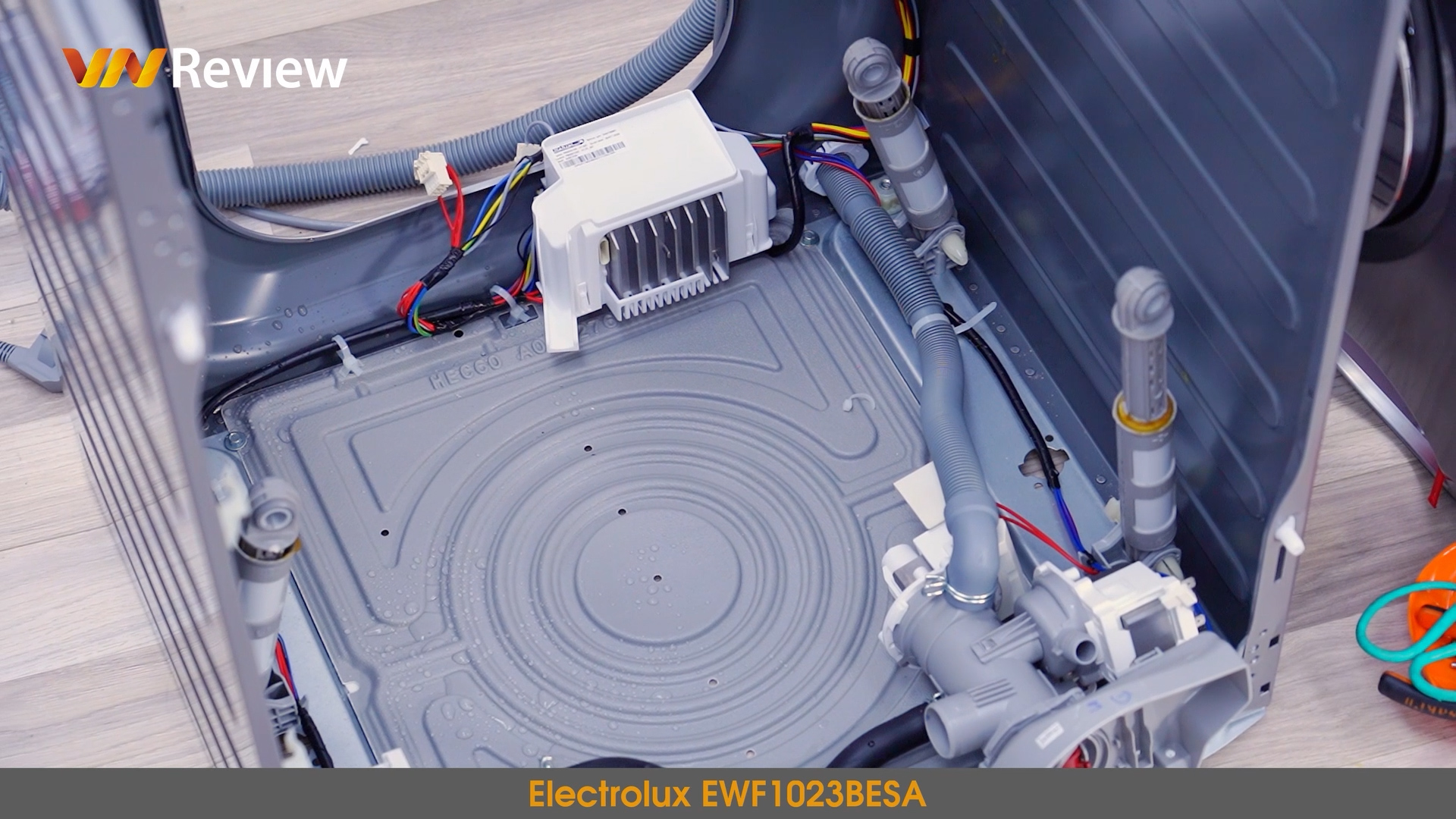 With any washing machine, cleaning efficiency is still the most basic requirement. In spite of the fact that our everyday clothes are seldom too dirty, we still run two test machines under what could be said to be very “harsh” conditions. 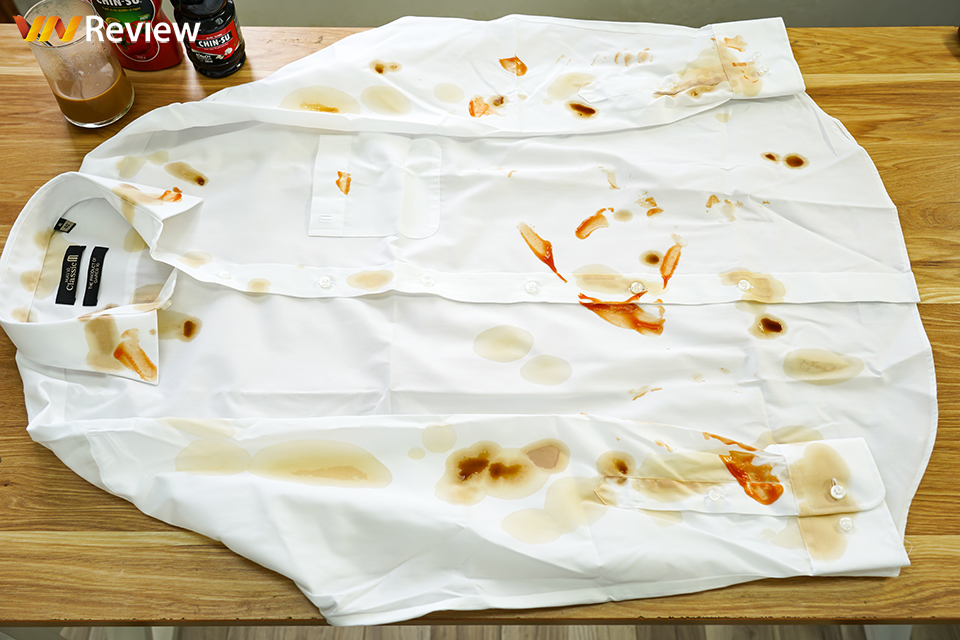 Two white shirts were smeared with soy sauce, chili sauce and coffee water (instant coffee) on many positions, including difficult to clean positions such as collars, wrists, pockets, armpits and lapels. Then, two soiled shirts were washed with other laundry on two machines in 60 degrees C hot wash mode. 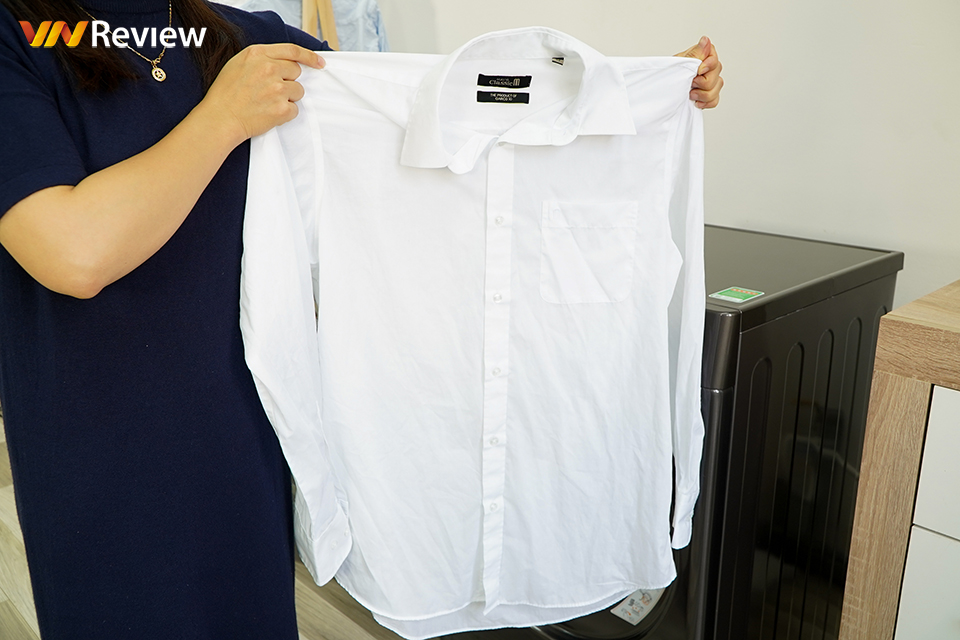 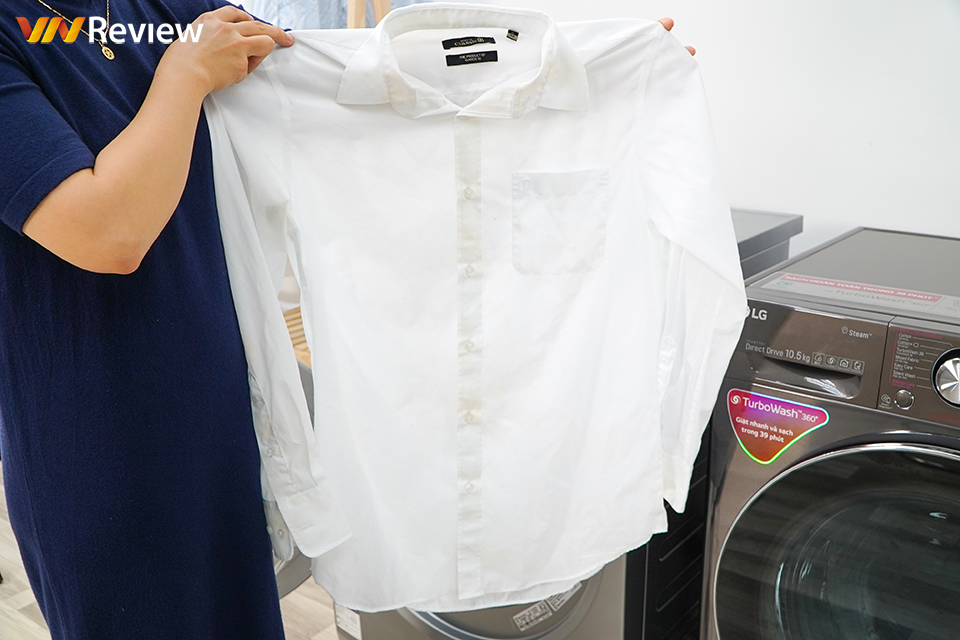 The shirt results in the Electrolux washing machine

As a result, the shirt in LG washing machine has been cleaned for all the smeared spots. Meanwhile, the shirt in the Electrolux washing machine still has visible dirt in some places such as neck, pocket and lap. These stains do not completely clean after we continue washing with hot water with stain removal mode (washing time is 30 minutes longer than normal 60 degree hot water wash).

According to our conjecture, this difference in cleaning performance under difficult conditions may be due to the LG’s direct drive motor that induces a more powerful washing motion. In addition, the discharge pressure on the LG washing machine’s drum during washing is also stronger through 4 nozzles that flush laundry from multiple directions while the washing bucket is spinning, while the Electrolux washing machine has only 1 line. softener enters the washing bucket from the front door. 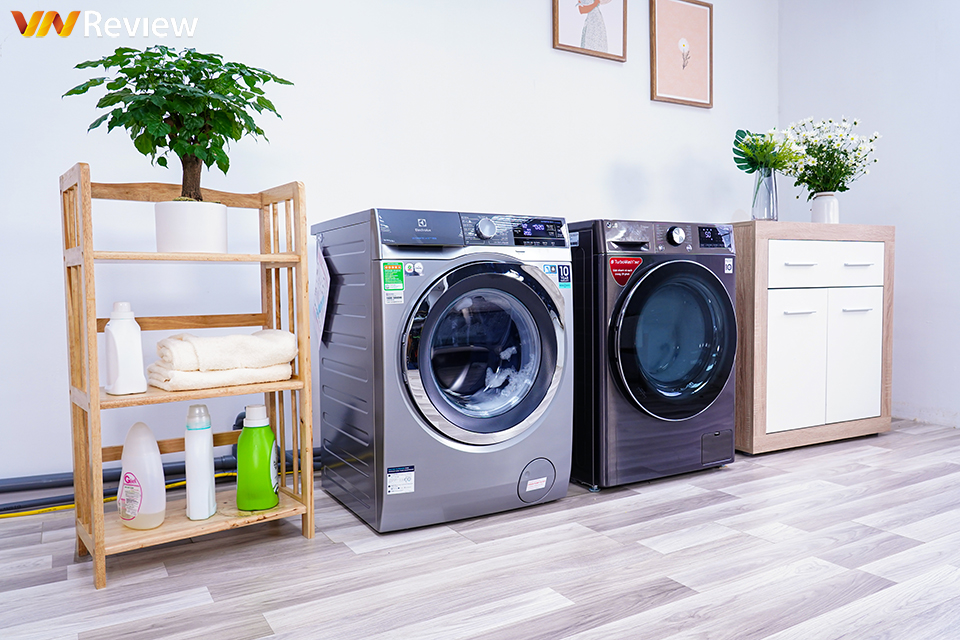 Another detail that can also affect washing performance between the two machines is the difference in sensor technology that measures laundry softness and weight. During the actual washing process, we found that LG washing machine will turn the drum one or two times slowly before rinsing before the wash cycle. According to LG, this is a gesture for the machine to analyze the washing weight and fabric softness in the drum, then compare it with the database of available washing machine usage habits, thereby giving the dark washing cycle. priority includes proper washing movement, temperature and wash time.

The spin speed is higher so it is not surprising that the laundry from LG washer is squeezed drier. Two washing machines in Cotton mode with cold water of the same type and the same amount of dry laundry is 2.88 kg. 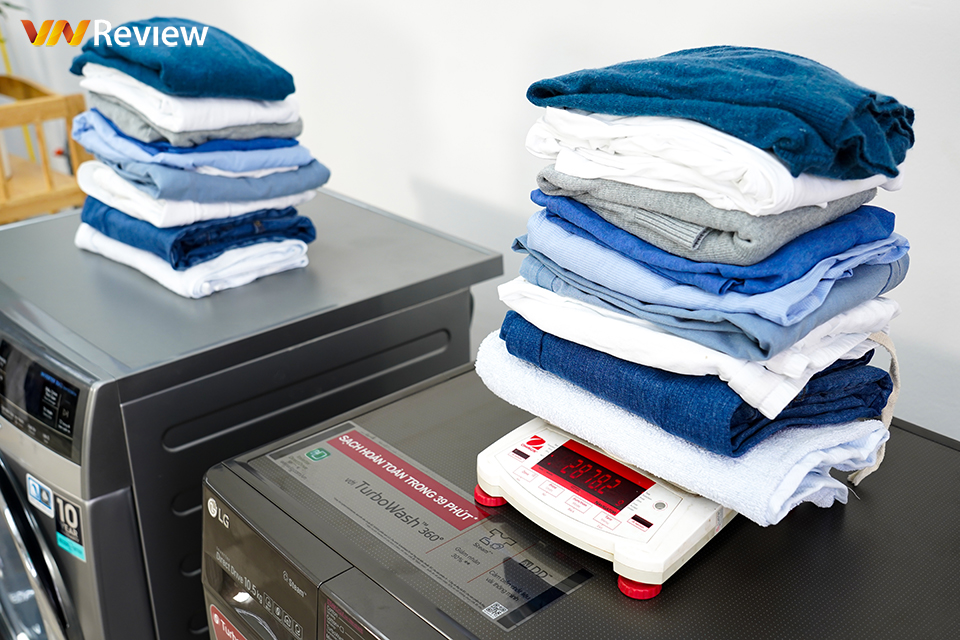 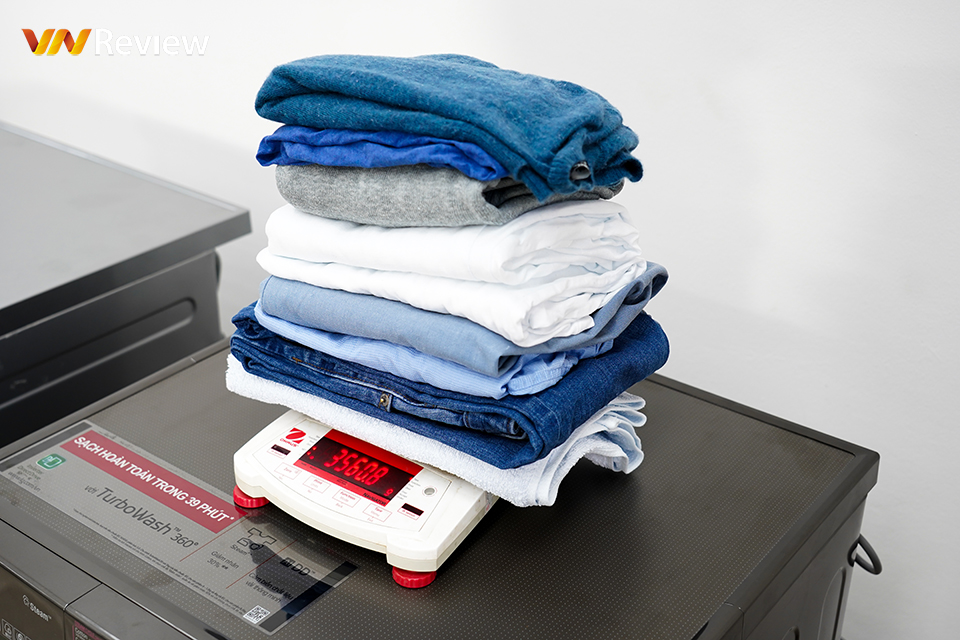 The weight of clothes after washing by LG machine 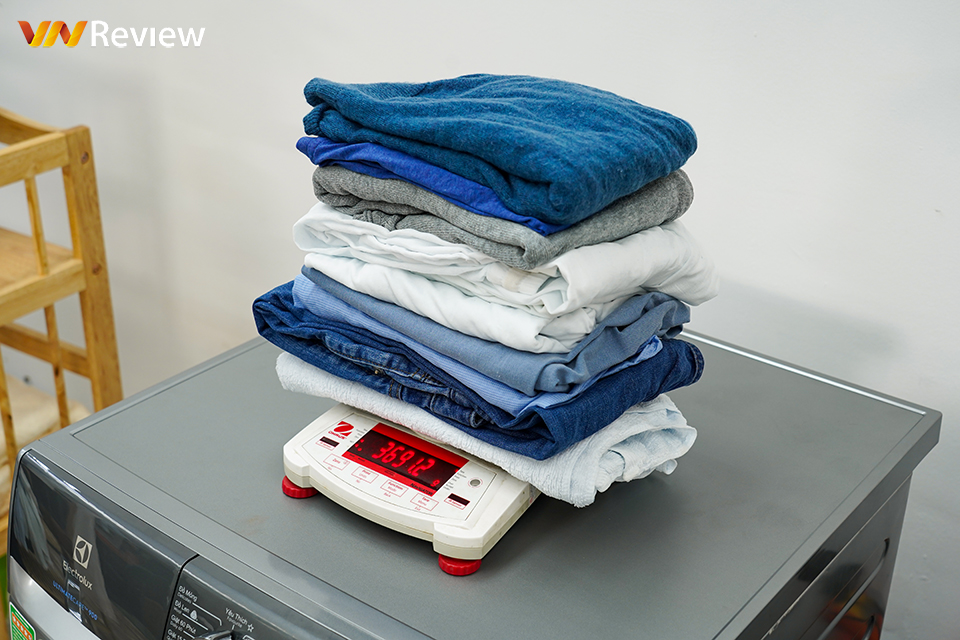 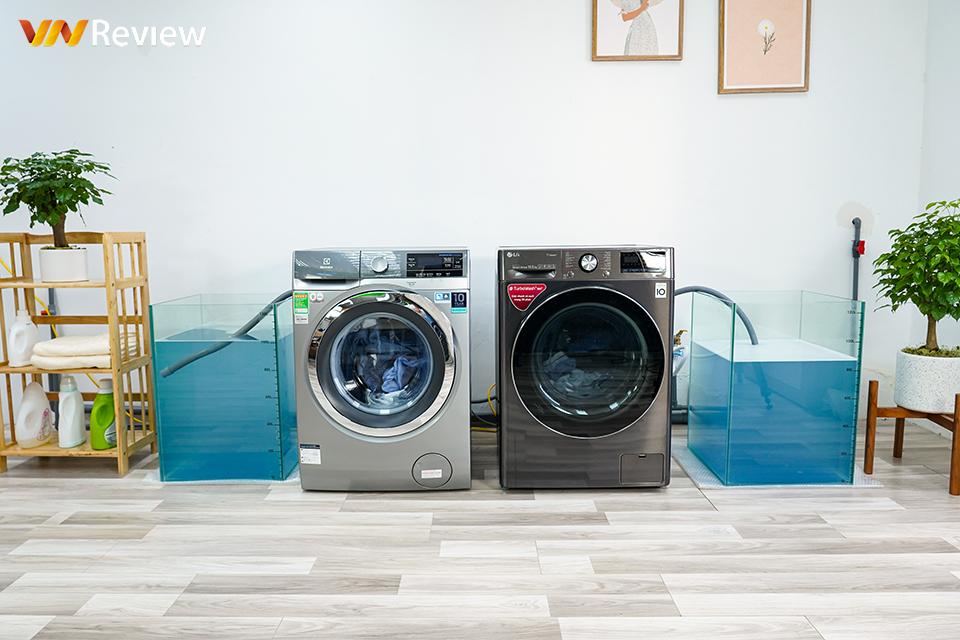 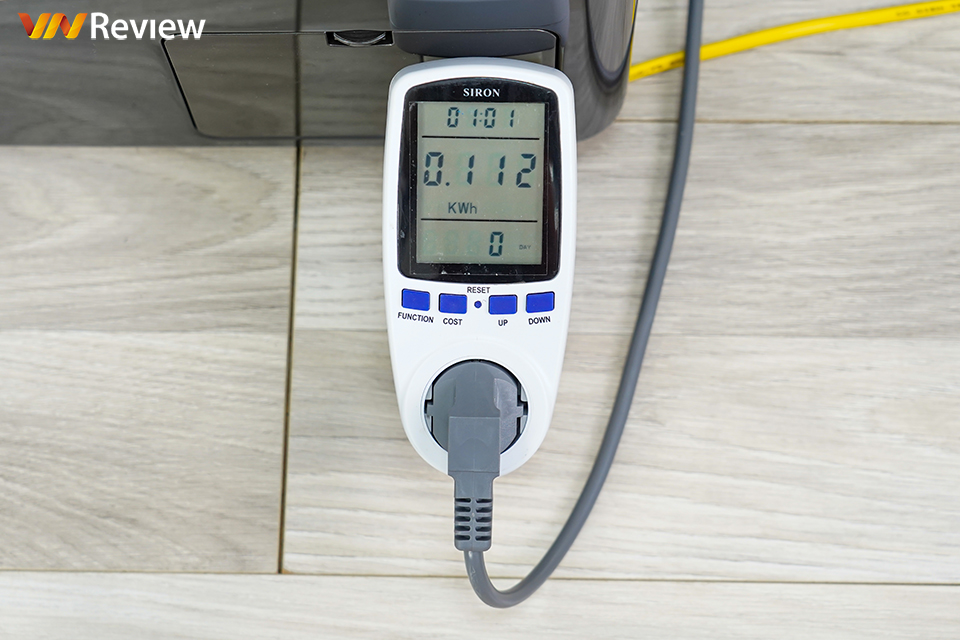 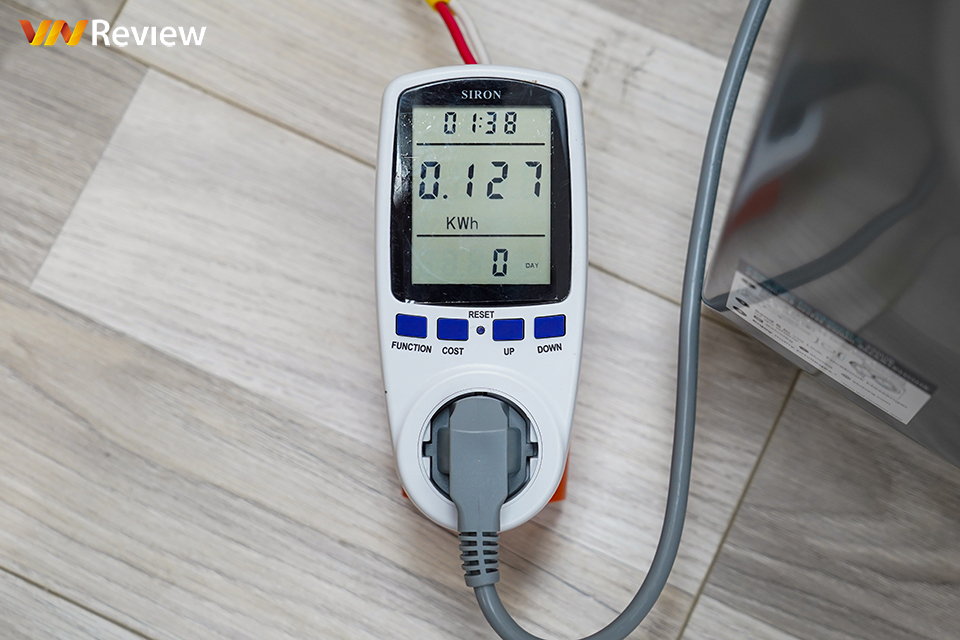 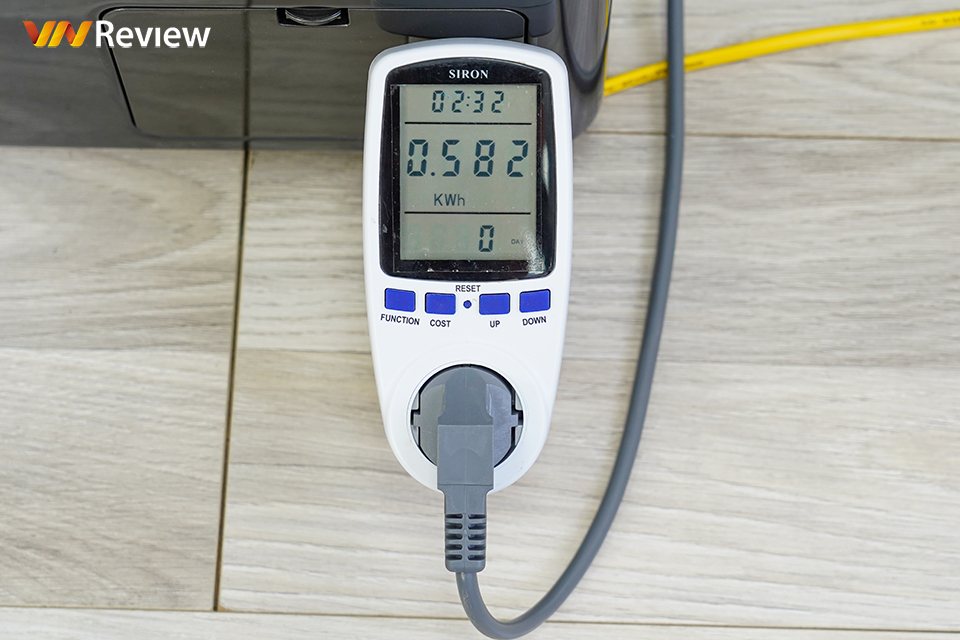 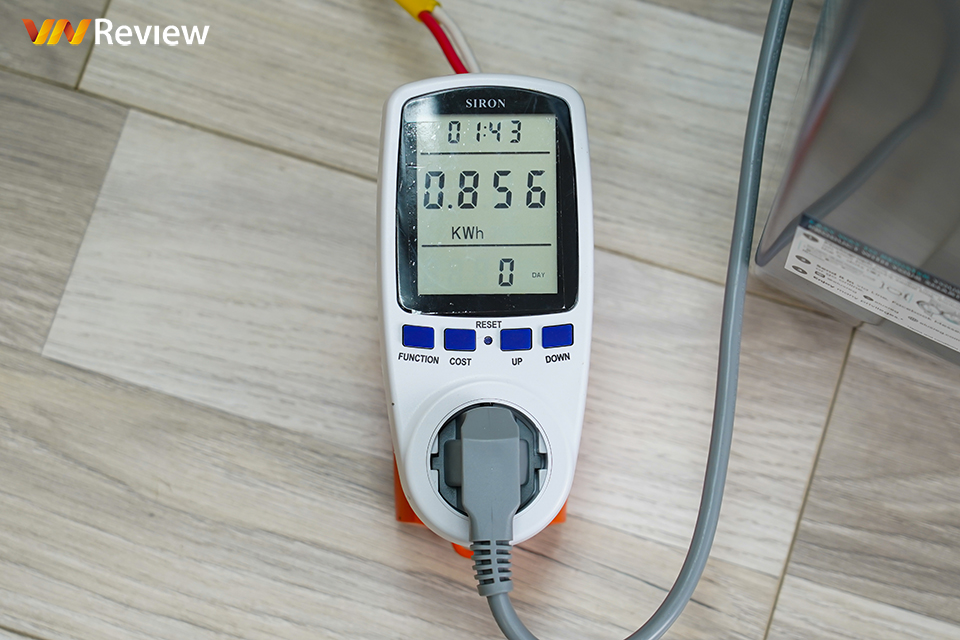 The difference of a direct drive motor compared to a belt drive motor gives LG washing machine an advantage in practical experience. LG washing machines have proven their ability to remove dirt from laundry more efficiently, run quieter, and consume more water and electricity. In addition, the LG washing machine’s design has a more modern design, the shell material, the door and the finishing of the inside details are also more refined. Meanwhile, the Electrolux washing machine has a traditional design, a sturdy case and a panel area designed for easier viewing.