Similar to the phones released before it, the OnePlus 9RT offers users a high level of performance for the money. Powered by last year’s flagship chip, Snapdragon 888, OnePlus 9RT gives users a good level of gaming performance. Today’s article will review the OnePlus 9RT series in detail, thereby pointing out the pluses and minuses of the product line. 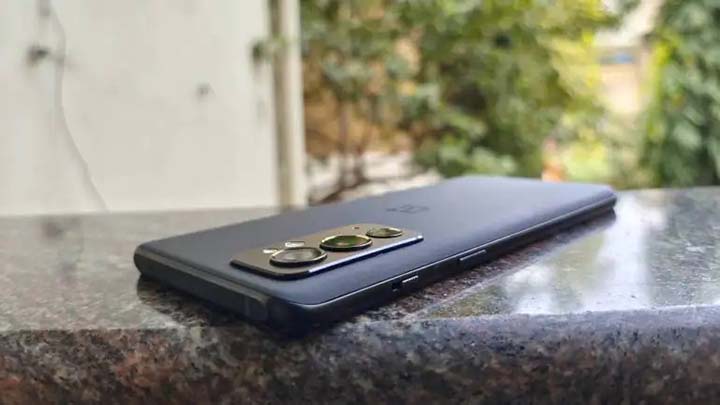 OnePlus 9RT is a phone with a premium design. The device is released in 2 color versions called Hacker Black and Nano Silver, and the exterior of both versions is similar to last year’s flagship OnePlus 9 Pro. The color version of the model we used in the review is called Hacker Black. The back of the machine is finished flat and smooth, providing an extremely comfortable grip in the hand.

The surface of the camera cluster is finished differently from the back, but still very consistent with the overall design of the phone. Located on this camera cluster are 3 separate lenses. Each lens is encased inside a polished chrome plated circle, giving the camera a sophisticated look. The back of the OnePlus 9RT is made of glass, which connects seamlessly to the front through an aluminum frame on the side.

In addition to the high-quality back, the manufacturer has done a great job in evenly distributing the volume for the OnePlus 9RT. Thanks to that, users can hold the phone firmly in their hands easily.

And similar to the previously released Oneplus models, the side of the 9RT is equipped with a toggle switch to switch between ringtone modes. The device is equipped with a dual SIM slot and a 2-speaker sound system. Overall, the OnePlus 9RT not only possesses a premium design, but also has a high build quality. 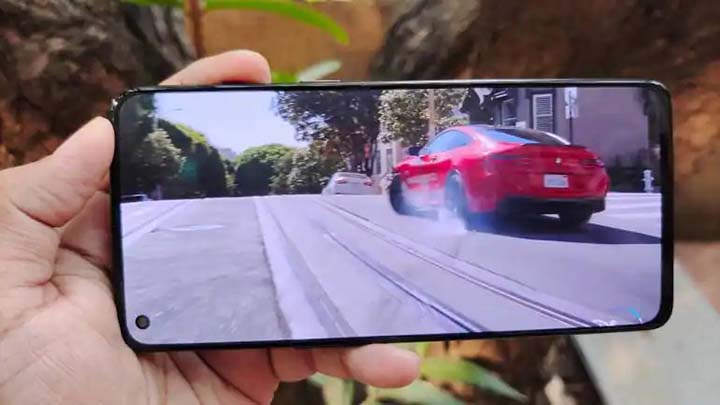 This is another one of the strong points when it comes to the OnePlus 9RT series. The device is equipped with an AMOLED screen with a diagonal size of 6.62 inches. This is a panel with Full HD + resolution and 120Hz refresh rate. In addition, the screen of the OnePlus 9RT also has a touch sampling rate of up to 300Hz, with the ability to push to a maximum of 600Hz in supported games. This is an extremely attractive feature for those who often play games on the phone.

In addition to the high refresh rate and touch sampling rate, the AMOLED panel that the company equips the OnePlus 9RT is of high quality. Colors are displayed vividly, with high contrast and not much change when looking at the camera sideways.

Located in the left corner of the screen, the OnePlus 9RT is punched with a small hole to make room for the selfie camera. This hole is quite small in size, so it will not affect the user experience much. 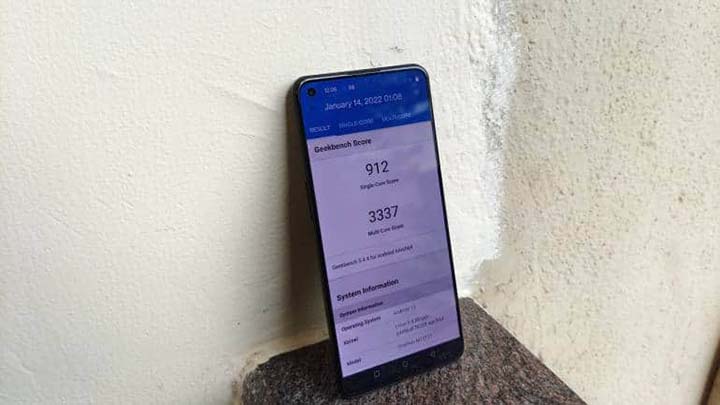 OnePlus 9RT uses Snapdragon 888 series of chips. Although it is no longer the highest performing chip line at the moment, Snapdragon 888 still delivers a strong level of performance, providing a good experience when playing games as well as when interact with different applications on the operating system. In addition, to improve the performance of the chip, the manufacturer has equipped the series with an effective heat dissipation system, which prevents the phone from overheating during long-term use.

Specifically, the OnePlus 9RT’s heat dissipation system is composed of a large steam chamber along with heat pipe systems placed in important positions. During actual use, OnePlus 9RT can play high-profile games like Call of Duty Mobile with smooth frame rates for a long time without experiencing thermal overload.

Unlike other OnePlus models, 9RT uses a different operating system, optimized by the manufacturer to bring the best gaming experience to users. However, you can still see similarities in terms of design and features compared to OxygenOS operating system during the use of the device. The customized operating system that OnePlus 9RT is built on is Android 11 and will be upgraded to the 12th version in the near future.

OnePlus is committed to supporting Android version updates for the next 3 years, as well as supporting security for 4 years for the 9RT series.

In daylight conditions, photos taken from the main camera have true colors, but the dynamic range handling is not very impressive. Specifically, the shadow areas of the scene tend to be blurred. Photos are highly detailed in most cases, especially in the center of the scene. However, the detail of the scene shows signs of reduction when you look to the edge.

OnePlus 9RT is equipped with a battery with a capacity of 4500 mAh, allowing me to use the device between 5 and 5.5 hours during actual use. This level of battery life is considered mid-range in the segment. The battery level of the device will be even shorter if you play many games during use.

To compensate for the not-so-impressive battery life, the OnePlus 9RT supports fast charging with a capacity of up to 65W. Using this charger during the test, the device can be recharged from 5% to 100% in just 32 minutes. The device does not support wireless charging.

OnePlus 9RT is an attractive phone option in the high-end segment, especially for those who often play games. Equipped with last year’s flagship chip, the device has enough performance to handle all the needs of users. In addition to the fast performance and smooth user experience, the OnePlus 9RT also supports high charging speeds and has an impressive build quality. If you are looking for a high-value device, then the OnePlus 9RT will certainly be an option worth considering.