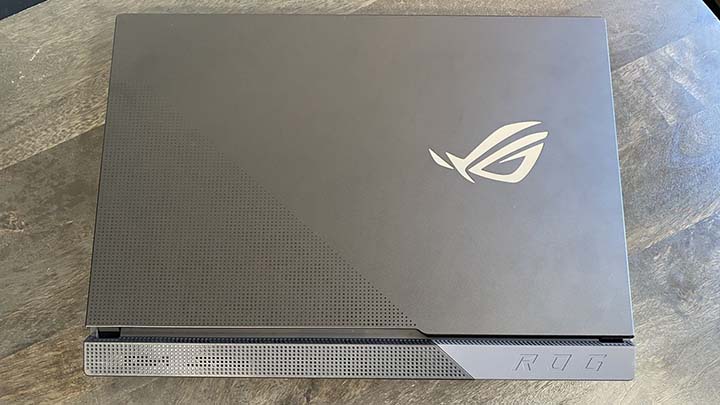 The outer shell of the Asus ROG Strix Scar 17 G733 is made entirely of metal, giving a solid and modern look to the gaming laptop. The surface of the laptop’s lid is finished with a two-tone design, giving the laptop a unique look. There is also a large Asus logo, illuminated by the RGB lighting system below.

The hinge system of the machine is firmly completed and possesses a moderate level of resistance, allowing me to open the laptop with one hand easily and conveniently.

Opening the laptop, you’ll find an interior area with a strikingly contrasting design, with the left half finished with the same design language as the case, while the other half is made from transparent plastic. , allowing you to see the components below.

The Asus ROG Strix Scar 17 G733 is decorated with a variety of RGB lighting systems, including a strip of lights on the front edge of the laptop. These light strips can be adjusted in color and effect through the machine’s control app.

Overall, the Asus ROG Strix Scar 17 G733 is a gaming laptop with impressive build quality and a high level of finishing. 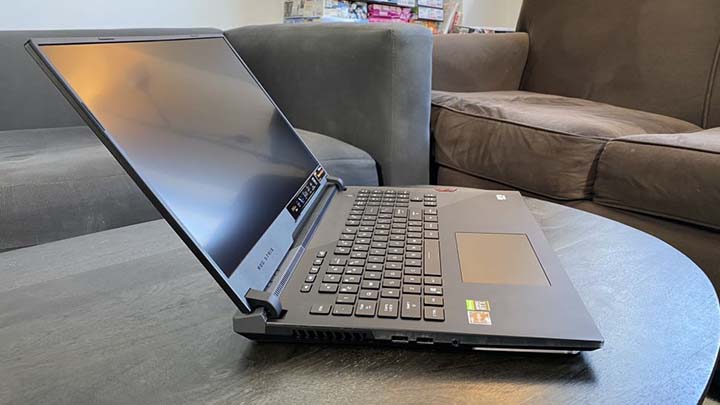 This level of configuration gives the ROG Strix Scar 17 G733 the best performance in its class. Overall, the machine can handle all the workloads you require, as well as being able to play all the different games on the market.

Test the graphics processing capabilities of the machine with the game Assassin’s Creed Odyssey. When playing with the highest configuration level at 1080 resolution, the machine has an average recorded frame rate of 72 fps. This result is slightly lower than the frame rate of the Alienware m17 R4 (78 fps) and comparable to the Zephyrus Duo (73 fps).

The Strix performed better in the game Shadow of the Tomb Raider, with a recorded frame rate of 92 fps. This result is worse than the Alienware’s frame rate (103 fps), but higher than the Aorus laptop (86 fps) and Zephyrus (76 fps).

Checking the overall processing ability with the Geekbench test, Asus’ gaming laptop scored 8231 (multi-core) and 1487 (single-core). This result is higher than the score that the Alienware m17 R4 recorded with the Intel Core i9-10980HK chip.

Strix Scar 17 G733 has 2 screen versions that you can choose from, including a screen with 1440p resolution, 165Hz or a version with FHD resolution, 360Hz. The version of the device that we review is equipped with a second screen model.

Strix once again came last in the screen brightness test. In this test, Asus’ gaming laptop has a recorded screen brightness of 261 nits, much lower when compared to other laptops in the same segment in this article. 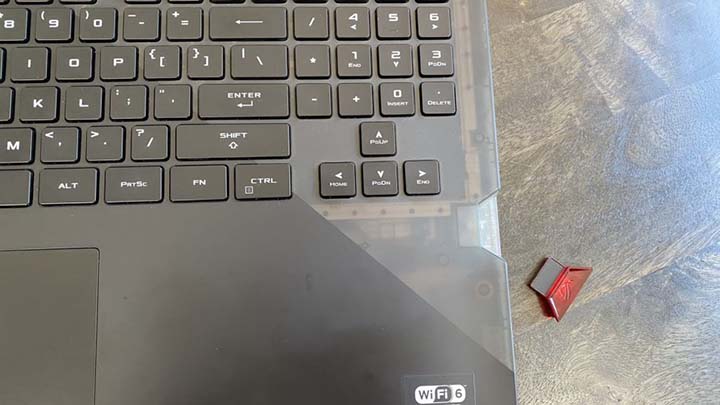 Asus ROG Strix Scar 17 G733 is equipped with a set of high-quality keyboard, giving us an extremely comfortable using experience for a long time. The machine’s buttons are illuminated by an RGB lighting system below, which can be adjusted through the machine’s settings app.

The touchpad of the machine has an area of ​​​​two sides of 5.1 x 3.1 inches, with a smooth flat surface that helps me easily control the mouse pointer to interact with different applications on the Windows 10 operating system.

Similar to most gaming laptops on the market, the battery life of the ROG Strix Scar 17 G733 is not very long. In our test, the Asus gaming laptop lasted only 3 hours and 44 minutes after continuously surfing the web over wifi, with a screen brightness of 150 nit.

The heat dissipated during operation of the Asus ROG Strix Scar G733 is at an acceptable level for a gaming laptop. To determine the laptop’s heat dissipation performance, we played Metro:Exodus for 15 minutes at the highest configuration setting. After this period of time, the touchpad and keyboard areas of the machine have a temperature of 30 and 41 degrees Celsius, respectively. The chassis area is where the laptop radiates the highest heat, with the specific index recorded as 39 degrees C.

Sold in the high-end price segment, the Asus ROG Strix Scar 17 G733 is equipped with the most powerful components on the market today. Possessing a comprehensive level of performance in all aspects, the laptop can play all different games well, as well as allowing me to quickly complete any daily workload.

If you are looking for a gaming laptop with top performance, then the Asus ROG Strix Scar 17 G733 will be an option worth checking out.