Thin and light can also have 8 cores and 16 threads: AMD releases a new generation of Ryzen 4000 series mobile processors

Thin and light can also have 8 cores and 16 threads: AMD releases a new generation of Ryzen 4000 series mobile processors

On January 7, 2020, AMD released the highly-regarded Ryzen 4000 series of mobile processors at CES 2020, marking that AMD officially blew the counterattack on the mobile platform.

The mobile platform has not been AMD’s strong point. Even the Ryzen 3000 series APU of last year could not shake Intel’s dominance in the notebook market. It can only compete on low-priced products.

This year, AMD is working hard to provide a great experience for gamers and creators.

Lisa Su mentioned that the CPU performance of mobile platforms has been increasing at a high speed in the past, but the arrival of the Ryzen 4000 series will accelerate this progress.

First released the new Ryzen 7 4800U, which is the low-voltage flagship of the TDP 15W, with powerful performance of 8 cores and 16 threads.

Compared with the i7-1065G7 recently released by friends, the Ryzen 7 4800U has been fully rolled. Among them, the multi-core lead has reached 90%, the graphics performance has led 28%, and even the single core has a 4% lead.

For creators, this brings a significant improvement, leading the competition to the latest Icelake flagship.

After comparing with the opponent, the 7nm process adopted by the Ryzen 4000 series brings 2 times the energy efficiency improvement compared to the previous generation.

After that, Lisa Su showed the Ryzen 7 4800U chip on the spot. You can see that the APU adopts a single Die design and encapsulates the IO core together.

Then AMD brought the first product equipped with Ryzen 7 4800U. Lenovo YOGA Slim 7 comes from a variant of Lenovo’s current thin and light flagship C940. It can be seen that OEM manufacturers attach great importance to the Ryzen 4000 series.

The mobile i7-9750H is obviously not enough. The performance of the Ryzen 7 4800H is significantly better than that of the desktop i7-9700K.

Then AMD showed off the first Ryzen 4000 H-series gaming laptop from the ROG’s Zephyrus G14. This product not only selects 2K and 1080P 120 Hz screen, but also has 10 hours of video playback life. More importantly–

The LED matrix on the A side of this product can be customized for lighting effects.

Immediately after that, AMD brought SMARTSHIFT technology for mobile platforms, which brought about a 10% increase in the number of frames with independent display and set display. 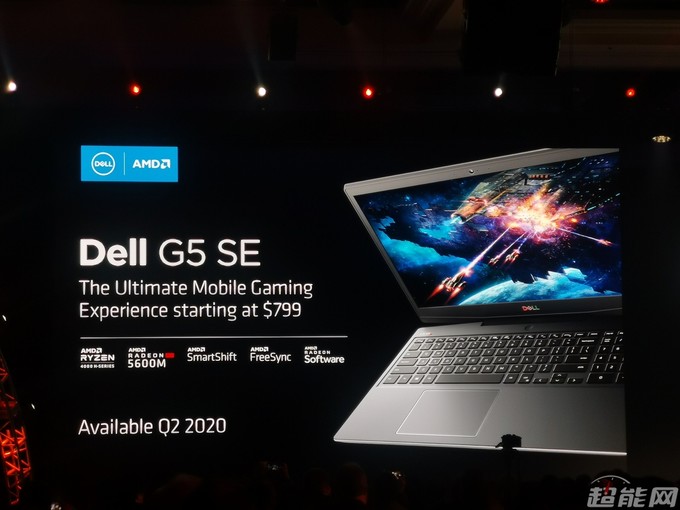 Next AMD showed a prototype using this product: Dell G5 SE, which is equipped with a RX 5600M independent display, will be sold in 2020Q2.