The biggest threat that the Tyranids can pose to the other races of the galaxy is their ability to bite and swallow everything, turning every resource on the planet into a pile of barren rock. has some value.

One of the methods that Tyranid uses to determine if a planet has life is to analyze the planet’s spectral light from a distance. However, the fastest and most popular method that Hive Mind likes to use is to use some form of biological life to probe life on distant planets hundreds of light years ahead of the Hive Fleet fleet.

The earliest stages of an invasion are particularly evident in the sophistication of the Tyranid species. At this stage, they begin to evaluate forces on the planet and begin to invade native species.

The three most active Tyranid species of this period were the Vanguard Drone Ship, Lictor and Genestealer. These biological lifeforms have two important characteristics to invade: their ability to hide and act independently. While the Vanguard Drone Ship is a small bio-ship deployed in space, in many cases, after releasing its biological life forms on the planet in silence, it will leave, continuing to explore the other planet. Creatures such as Lictor, Genestealer will be released into the planet by pouches of Mycetic spores. This intrusive force is likely led by a synapse organism like Broodlord; and Tyranid reproduction can begin immediately.

Contaminate the native organism’s genome with that of the Tyranid, creating hybrids at the behest of Broodlord or other representative Tyranid instances of Hive Mind.

Many experts also believe that species like the Genestealer can sneak into a planet without the help of the Vanguard Drone Ship. Several specimens of this species have been found on abandoned Space Hulk ships and stockpiles of Warp teleporters.

These creatures are well aware that they must survive and infect before the main Hive Fleet fleet can invade. They differ from other Tyranid species by being able to function independently for a long time. The majority of Tyranid species have been reported to be nearly unable to act in coordination when outside of the sphere of influence of Hive Mind.

Since they had to operate light years away from the herd, they exhibited a degree of intelligence and cunning cunning more than was thought. This was most evident in their surprisingly subtle plans. 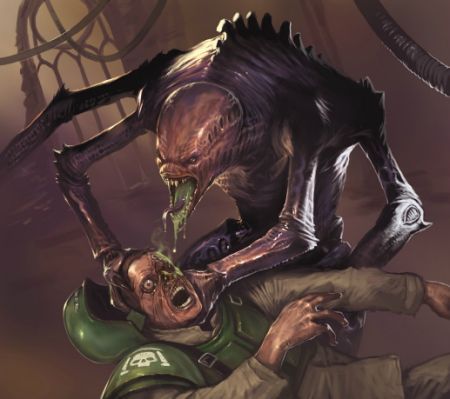 Since their time of penetration is both fast and mysterious, the Imperium’s intelligence units may still be completely unable to grasp the Xenos’ invasion at this time. In some cases when a Vanguard Drone Ship is confirmed, it must be seen as the highest priority target in the system, and must be disposed of at all costs, so that it can be maintained. delay the process of invading the planet of the Tyranids.

The invading organisms must be eliminated even by the most extreme methods, before they can nest in time and create a hidden hybrid community. Once Tyranid has set foot on the planet, their strategy will change.

During this period, the Tyranid’s range of activity was no longer a mystery, and the number began to double every 2 to 5 days. The range has expanded to thousands of kilometers, and has become a significant threat to the planetary garrisons and the Imperium Guard.

Lictors are quite important creatures, they can collect information transmitted back to Hive Mind immediately as long as it is within the synapse range. Any Lictor that is killed can slow down the Tyranid’s invasion, as the invading Xenos are less optimized by the planet’s ecosystem.

Upon completion of the integration of the planet’s wild life forms, these intruders will emit a Psychic call. This call would attract the Hive Fleet fleet to the star system, and begin the next step of the invasion.

The arrival of the Hive Ship and the escort ships around it heralded the next phase of the invasion. As a giant synapse of Tyranid, the Hive Ship can disrupt Warp within a radius of several hundred light years. When these giant creatures from nowhere appear, all attempts to escape and call for help of the planet are too late. 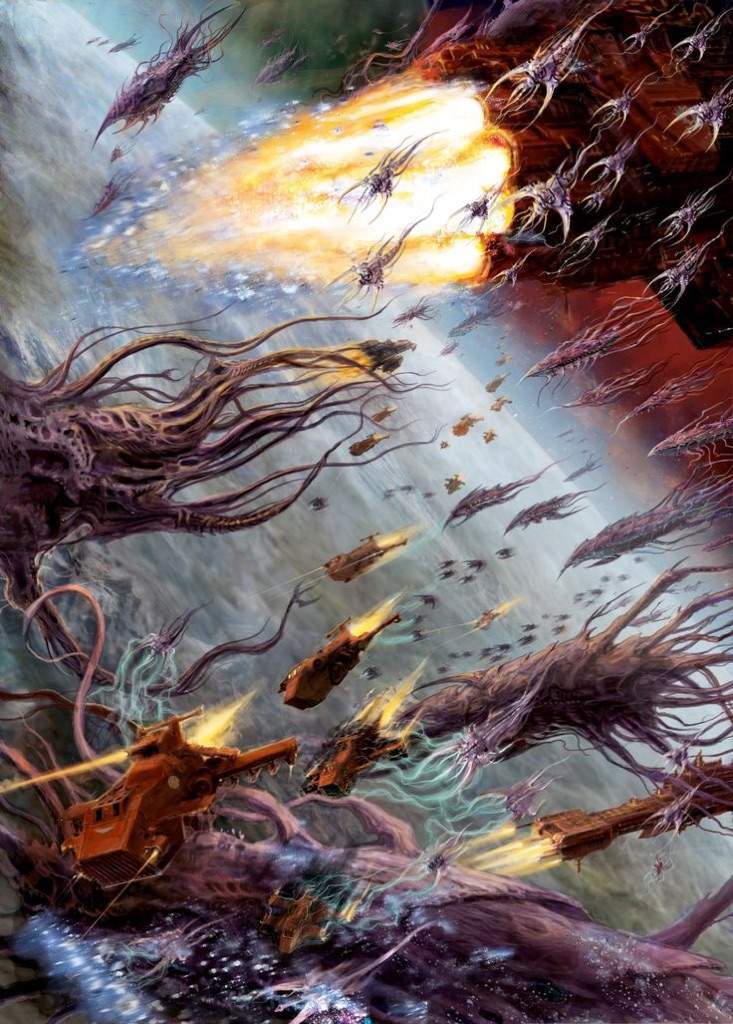 Even the planet’s defensive warships could not leave Immaterium due to the influence of Shadow in the Warp. Once the Hive Ship is close to the target planet, it will launch a rain of Mycetic spores into the planet’s atmosphere and surface.

Some spore sacs contain large numbers of microorganisms that can transform the atmosphere, oceans, matter, animals and plants. Completely destroys the natural ecosystem and recreates the right circumstances for the herd. Several other spore vesicles contain Tyranid transformations of the Gaunt subspecies, immediately preparing for the coming attack. 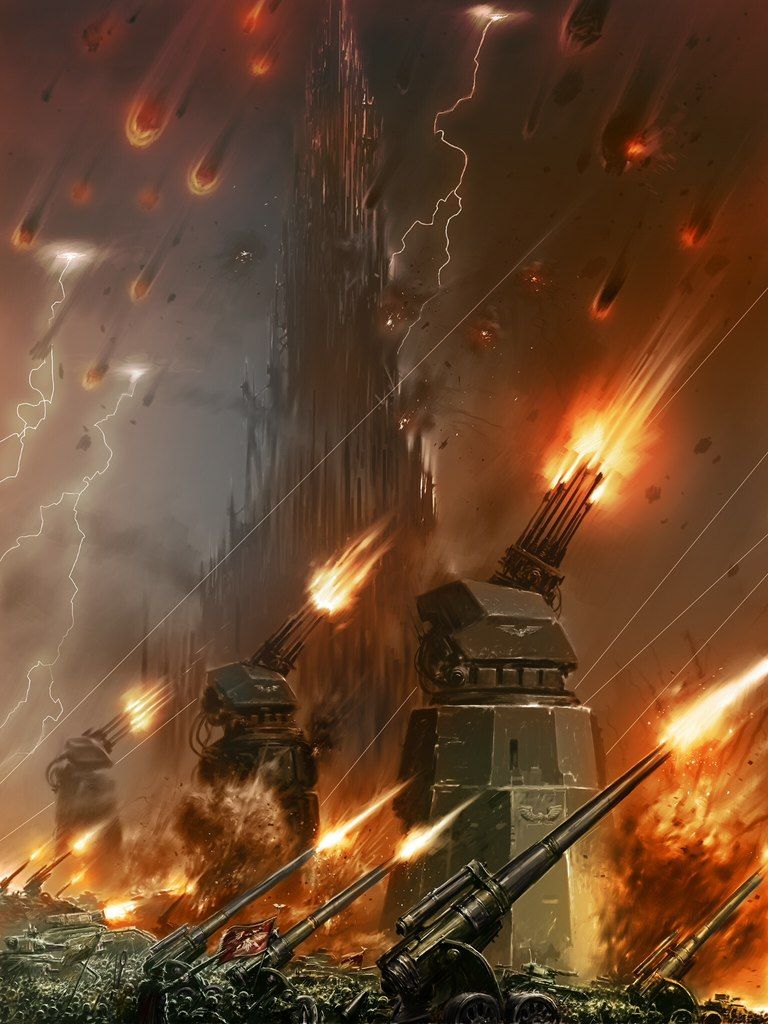 Meanwhile, other Tyranids such as Mawloc and Trygon begin to dig deep into the surface crust, in the process, they will spread spores that will later develop completely into Capillary towers. Other life forms could use these tunnels to access the planet’s minerals and underground life forms.

At the same time, a rain of destruction begins to happen, and hybrid animals and plants created by polluting the genetic resources begin to attack the planet’s defenders. By killing critical officers or information centers, intruders can delay or even destroy the planet’s defenses. 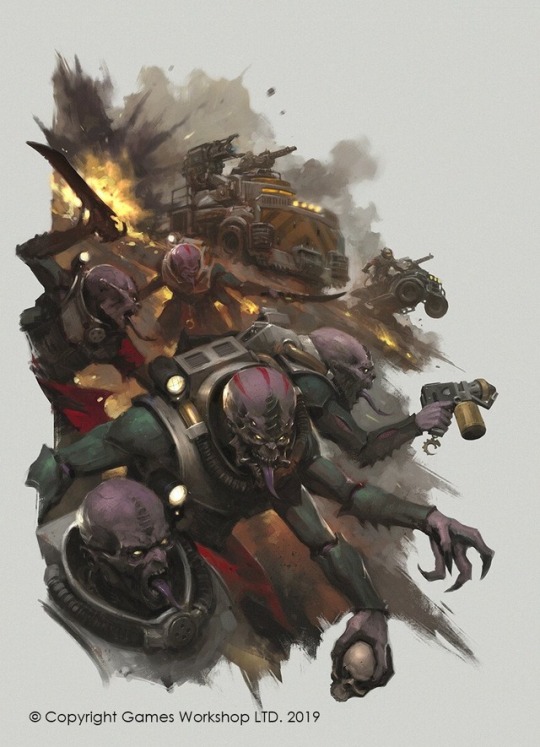 During this period, the defenders of the planet must act decisively and come up with a quick strategy or all are eaten up. Destroying the Hive Ships comes to the fore, if the Hive Ship is destroyed could disrupt the synapse connection between the rest of the Hive Fleet, causing their army to become in disarray. This gives the guards a chance to shred and destroy the remaining forces.

In the event that the Hive Ship cannot be destroyed, rinsing off the Mycetic spores is also more or less helpful in preventing the hungry herd, though much less effective. Even the large numbers of Hive Ships have limited resources, and more destruction means less Tyranids will be dealt with.

Dealing with the Genestealer and their subspecies at this stage is of utmost importance. With the satellite system limited, any loss of communication could kill the defenders here. Security measures must be best implemented to protect the integrity of commanders and information centers.

Tyranid’s Hive Mind possesses the ability to evaluate tactics and change his strategy. In the rare recorded cases, Hive Fleet faced unexpected resistance that could abandon the attack and retreat to choose an alternative target.

After “Fitness Ring Adventure” is popular, NS fitness products are released. Can mobile games be of the same category? Original

Post Views: 109 National Bank’s Nintendo Switch™ game “Fitness Ring Adventure” was officially released on September 3, 2020, priced at 499 yuan. This game is sold as a bundled set of Ring-Con™, leg straps and game exchange cards. The official Taobao store of the National Bank NS was sold out on the day of the […]

Post Views: 25 Doorbell cameras (and smart home cameras in general) can sometimes feel like they’re ripped from the pages of 1984, but even so, there’s no way around it: they’re incredibly useful. Whether you’re dealing with a package thief situation or just want to see what the deal is with the random car that […]

Post Views: 51 Minecraft and 7 games just can’t help but play Play Minecraft style games If you’re tired of Minecraft, try switching to one of the following games to change your feeling and experience. These are games with graphics, gameplay very similar to Mine but also has its own imprints and characteristics so that […]