The popular “Monster Strike” on smartphones appears in 3DS


The popular app “Monster Strike” that can be played on smart devices such as smartphones and tablets is now available as a Nintendo 3DS version! The player will be the main character of the animated version that is currently being distributed on YouTube, and will proceed with the story. If you watch the animation before purchasing the product version, it will be many times more interesting. 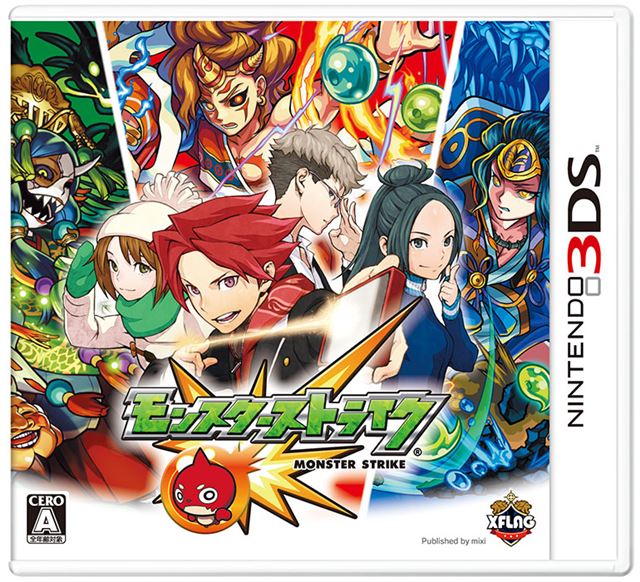 Enjoy the original story of the 3DS version only

Nowadays, there are many games that run on smart devices such as smartphones and tablets, and many of them hit big hits more than home game software. Among those titles, the “Monster Strike” app distributed by Mixi is particularly strong. The number of registered users has already exceeded 30 million, and many TV commercials are also aired, so it would be more difficult to find someone you don't know.

Such a monster strike was finally released for Nintendo 3DS. The original "Hunting RPG to pull and play monsters" system remains unchanged, but an original story that was not in the app version has been added. In addition, new monsters and new quests that only appear in the 3DS version, special techniques etc. are also prepared, so even those who are addicted to the application version can enjoy it even if the 3DS version is the first play It is. Of course, cooperative play is possible as well as the app version, and the 3DS version will be able to excite with the usual friends. 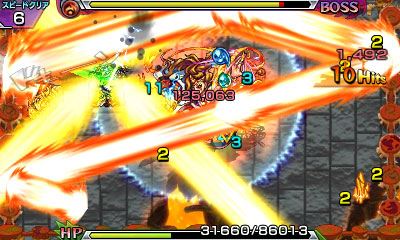 Until now it was only the app version, but now you can play monster strikes with 3DS!

The story begins like this. Homura Ren, the hero who came back to Kaminohara, where he once lived. Although he must have lived in this city before, he was uncomfortable with the lack of memory at that time. On the first day of school transfer, I noticed that a strange app “Monst” was installed on my smartphone that I had repaired. When activated, the monster Oragon jumps out of it and is said to have an important mission towards Len. At the same time, a mysterious monster gate appeared in the city, affecting humans. Len works with Oragon and classmates to face incidents that occur in various places. Before that, without knowing that an unimaginable truth is sleeping …

Ren, the main character who has lost his past memories, solves the mystery with his unique characters such as classmates. A story full of friendship, laughter, and tension, a story that everyone can enjoy while their heart is hot is waiting. 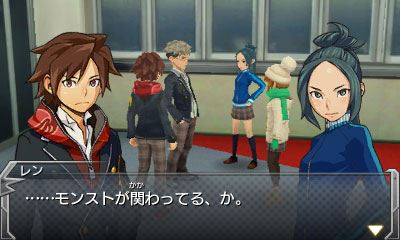 Stories that aren't in the app version make the play even more exciting. Of course, there are plenty of original elements only for the 3DS version!

The battle rules are simple. Just pull and play the monster

The hot part of monster strike is the battle scene. The player simply pulls the four monsters stored in the deck with a touch pen and hits them against the enemy. Monsters have two attributes: one that reflects when it hits an enemy or obstacle, and one that passes through. Let's master the nature and defeat the enemy. 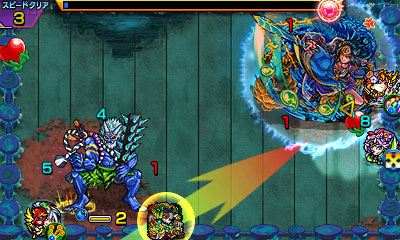 When you play a monster, you run around the screen indefinitely and damage it if you hit an enemy. This flashy and exhilarating feeling is one of the attractions

At this time, if the monster you play touches an ally monster, a technique called friendship combo is activated. The friendship combo includes things that damage enemies and recover HPs of allies that come into contact, so the key to the strategy is which monster to take. Furthermore, monsters have a special technique called “Strike Shot” that can be used after a certain number of turns. If this is used, there is a possibility of one-shot reversal even when pinching! In addition, the 3DS version also has a monster animation cut-in that is not available in the app version. If you have a favorite monster in the app version, you want to see this cut-in once. 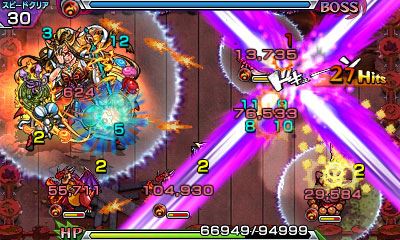 The friendship combo is activated when friendly monsters come into contact. Although it is not as powerful as a direct attack, it can be expected to have good effects, such as giving enormous damage to enemies or temporarily improving the status of friendly monsters 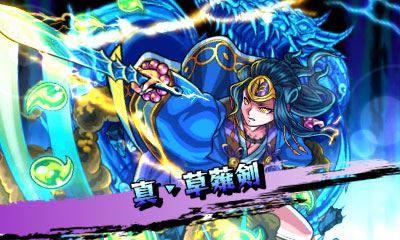 Strike shot is a big reversal technique used in this scene. A new monster cut-in animation is included in the 3DS version. Therefore, you can get hotter than the app version.

Each monster has one of five attributes: fire, wood, water, light, and darkness. The fire, tree, and water attributes have a three-way relationship, and light and darkness are strong and weak attributes. The attack and damage received depends on the compatibility. If you do not fight with this element in mind, you will be forced to struggle even with a powerful monster !? 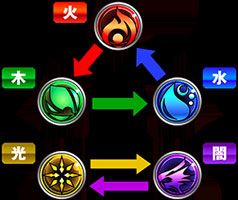 The relationship for each attribute is as follows. It ’s easy to understand, so it ’s easy to remember

Monsters may have unique abilities called abilities. With this, you can avoid the gimmicks on the battle stage automatically, or ignore the abilities of enemy monsters, and carry battles in an advantageous manner. For example, if you have an enemy with a gravity barrier around you, touching it will greatly slow down the speed of your ally. However, a monster with the ability of a gimmick “anti-gravity barrier” will not be affected. It will be important to analyze the gimmicks that will be placed on the stage where you will fight and take advantage of the monsters. 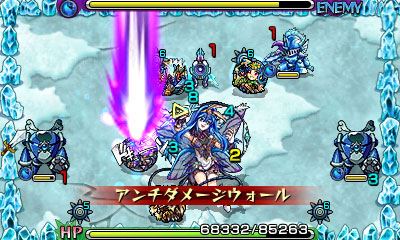 If you have a monster with an anti-damage wall in your ability, you can play with confidence even on the stage where you touch the wall and take damage.

Get stronger monsters and strengthen them and confront more powerful enemies!

As the game progresses, it will prevent you from seeing more powerful enemies than before. The important thing here is strengthening the monster deck that the player has. Obtaining powerful monsters is quick, and the way to do this is to win the battle and get it, get it to drop in the battle, or get a medal you can get in a certain way with a gacha machine Three ways to get using. 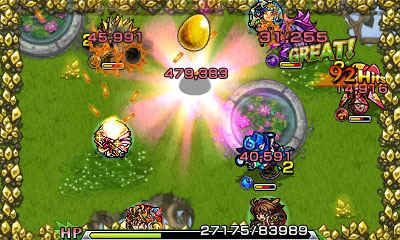 Sometimes it is dropped like this during a battle. Play many times and get a powerful monster

Newly acquired monsters can be upgraded by earning experience points. In addition to winning in battle, experience points can be obtained by combining monsters. Furthermore, if you find a strengthening monster "Kenchi" that is said to be somewhere in the world and use it as a synthetic material, you can increase the level at once! Also, if you use a monster called “tas” as a synthetic material, you can increase your HP, attack power, and speed. If you get a lot of these monsters, you will be able to power up your deck efficiently. 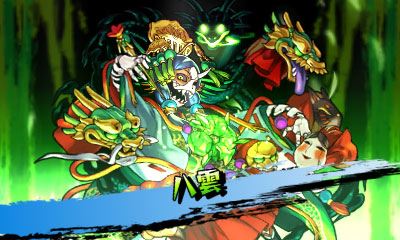 If you play the Evolution Material Quest, you can get the evolution material that is indispensable for strengthening the monster deck.

Certain monsters that have been brought up to level MAX in this way can “evolve” by consuming evolution items, or “divine” by synthesizing the specified monster as a material. To have. If this happens, it may be surprisingly easy to complete even on a stage that has been difficult until now. In addition, monsters can be upgraded and become a god to improve their status, and abilities, strike shots, and friendship combos are also strengthened. The appearance will also change, so you will love monsters more than before. 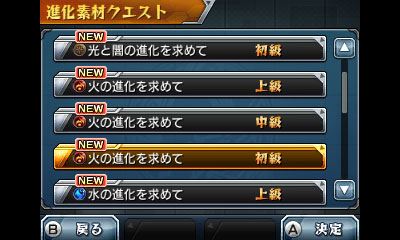 If you evolve or divinize, monsters will power up significantly. Strike shots are also strengthened, so it's more reliable!

If you play in large numbers, you can overcome difficult points !?

The app version can be played by multiple people, but the 3DS version can also be used for cooperative play with up to four people using local communications. At this time, if your friend has a powerful monster you don't have, you may be able to break through a stage that you couldn't clear by cooperating and capturing! In addition, after cooperative play, you will get a “Kizuna Bonus” and you can get rewards if you collect up to MAX. There are many other benefits to cooperative play, so I would like to play a lot actively. 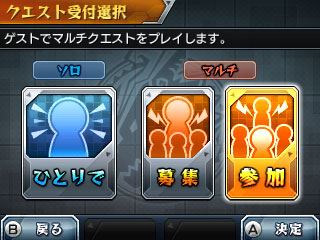 During cooperative play, you can choose whether to recruit or participate as a host, as in the app version

In passing communication, you can get a handy item strike card that can be used as an assistant during cooperative play. If you use a stronger strike card, you may be able to defeat strong enemies that appear in difficult battles and get powerful monsters. It will be an indispensable item to make the game more advantageous.

The monster strike that appeared with the addition of new elements such as stories and original monsters while maintaining the fun of the app version. If you don't have a smart device but want to play "Monst", it's a great choice. Even players who are playing the app version will be able to play happily even for existing users who want a new stimulus because the new monsters and original stories are fresh.