The pond in the middle of Antarctica suddenly turned purple, surprisingly scientific and still doesn’t understand why


Purple is definitely not the usual color of a lake. Yet a pond in Antarctica suddenly changed to this color, but science is still debating the cause.

In the days when the internet seemed to be not interested in anything else but the disease, but no! Recently, social media has spread a very strange picture of a pond in Antarctica. The reason an image is of interest is that just look: it is purple!

Scott Hotaling, a PhD student at Washington State University, is conducting field research in Antarctica to learn about the biology of the continent’s largest insect. But in the process of working, Hotaling caught the pond with a very strange purple color, located on Humble rock island. 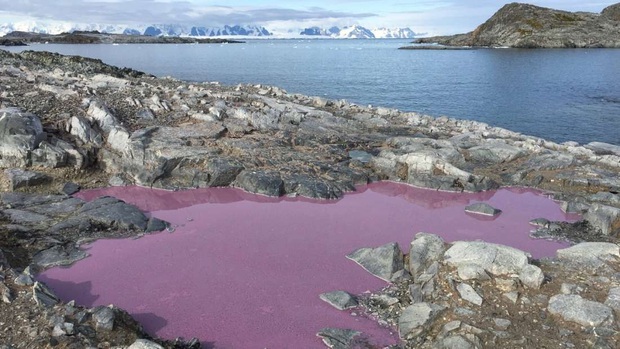 The strange lake shared by Hotaling

Hotaling said the pond is located near Palmer station, very close to the sea, about 5 meters above sea level and quite shallow. But why is water color so strange? Hotaling didn’t know, and for an answer, he decided … to Twitter and asked his colleagues for the day.

It is known that Humble island is considered a very important natural habitat of some penguins. Hotaling speculates that this color is most likely caused by a nearby bird’s nest. Still, some scientists believe it could be due to an outbreak of bacteria.

“Based on the purple color of the bacteria, I’m sure this is the kind of bacteria that evolved to photosynthesis without oxygen. If there’s no scent of rotten eggs around here (hydrogen sulfide gas), then they can grow with light from energy source around, ” – Michael Madigan, microbiologist shared. However, Hotaling later added that the pond did not smell too terrible – at least according to what his team felt after comparing it to the colony of nearby sea seals.

Stefano Amalfitano, an ocean ecologist, says the lake is an interesting example of the proliferation of staining bacteria in Antarctica. Some species include Halobacterium halobium, Dunaliella salina, or Rhodocylcus purpureus.

The reason why the pond has such a color has not been clarified. On the positive side, Hotaling thinks that social networking is a great tool for the scientific community to talk to each other.

“Twitter is really a great place. We find something interesting, share it and gain a lot of” good “knowledge. Of course there is a bad effect, but in my experience it is all positive.” – Hotaling comment.

Many scientists have been on Twitter hoping to get a sample, but Hotaling said he currently has no plans to continue learning more about the pond. Because the research licenses they currently have do not allow the collection of specimens.

“Mostly I want to share it here, hoping that the scientific community can set up its own research about this pond, or similar environments elsewhere! ‘