Compare the difference between atomic bombs and hydrogen bombs. How terrible is the destructive power of each bomb.

Humans witnessed the tremendous destructive power of the atomic bomb when the US dropped two bombs on Hiroshima and Nagasaki of Japan, killing more than 200,000 people. Atomic bombs generate destructive energy through fission, which divides atomic nuclei into other smaller atoms. The first, an electrically neutral nuetron in the atom’s nucleus collides with a plutonium or uranium nucleus, causing the nucleus to break apart into the elements barium and krypton.

This process releases energy in the form of radioactive gamma rays, some neutrons and heat. The generated neutrons continue to repeat the division until the reactive fuel runs out. Chain reaction time is only about a millionth of a second.

An atomic bomb was equivalent to 1,000 tons to several hundred thousand tons of TNT.

Hydrogen bombs work by fusing two light nuclei (hydrogen) into one heavier nucleus (helium). It is this fusion that is taking place on the Sun and is what makes it so bright and so hot.

However, an enormous amount of energy is required to create this fusion. This condition can only be met by an atomic bomb explosion. Therefore, the structure of a hydrogen bomb is a double bomb. The atomic bomb must first be detonated to facilitate the fusion reaction. Meanwhile, a series of atoms fuse together, converting into energy with more powerful destructive power than a normal atomic bomb. 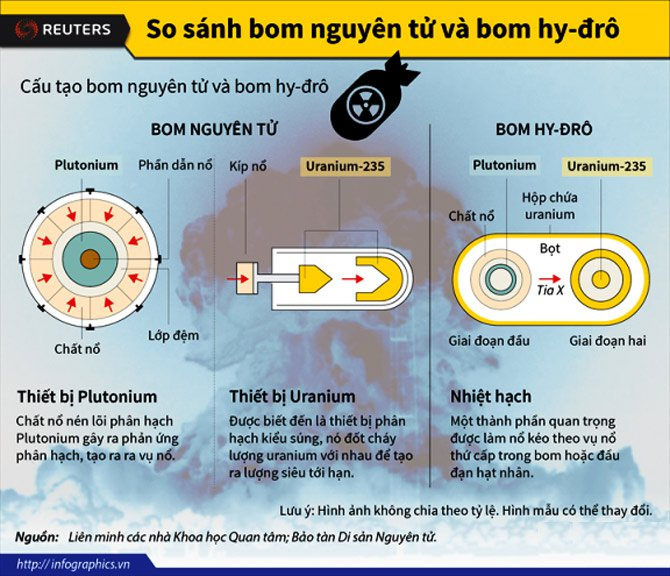 Hydrogen bombs are extremely destructive. The energy released from a hydrogen bomb explosion could instantly destroy anything within a radius of a few kilometers. Explosions can create fire storms; Intense white light can cause blindness; Radioactive dust and by-products can poison living organisms, polluting the air, soil, and water resources for hundreds of years.

Post Views: 45 Kawasaki added a slender frame, redesigned body and frame, and a shorter tail for the 2014 Ninja 400. Currently, the public as well as the press are focusing on the 2013 EICMA motorcycle exhibition taking place in Milan, Italy from November 5 to 10, 2013. Also participating in the 2013 EICMA exhibition […]

Post Views: 58 Since November 19, the entire SLG category has continued to increase in volume. Recently, there were 12,824 sets of materials in the peak period, with the highest proportion of themes from the three countries (44.74%). 01 Major manufacturers reinvested in SLG products with the theme of the Three Kingdoms, and Tencent games […]