Huawei's second-quarter smartphone sales began to suffer from US sanctions. According to Bloomberg forecasts, it will be a disaster.

Chinese technology firm is assessing the level of internal crisis, as well as considering options such as withdrawing the newly launched Honor 20. The device is expected to be sold on June 21 in some European countries such as France and the UK, but executives are carefully monitoring and may cut deliveries, if they find the machine sold poorly. more than expected. Two sources familiar with the matter said, the two largest French networks do not care much about Honor.

Huawei's marketing and sales managers are making internal charts, estimating sales losses of up to 40 to 60 million smartphones. This is a huge drop of up to 60% because foreign sales account for nearly half of Huawei's 206 million units sold globally. Counterpoint analyst Tom Kang said: "Huawei loses access to Play Store and popular Google applications such as Youtube, Gmail. Users will have to download or find other stores and applications instead.". This causes a psychological confusion, wary of customers. Negative influence will have the strongest impact on Japan, Europe and Latin America.

In the long run, Huawei has considered replacing software and chips from the US. However, their newly released devices did not exit the ban. Recently, the company postponed the model Mate X folding screen, rescheduled release from June to September this year. The company is also vague about launching a new OS, but the operating system will take time to develop. They will have to solve the application problem, and in the beginning, convincing customers this is a reasonable alternative to familiar Android. Otherwise, Huawei phones will lose competitiveness in the market. There have been reports of users selling off Huawei devices after the ban. 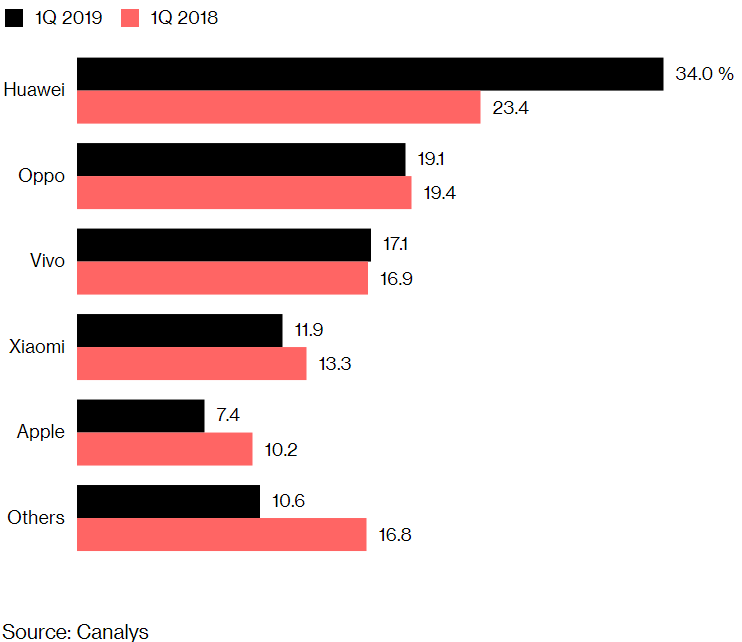 Set a goal to account for half of the domestic market and topple Samsung later this year, but Huawei had to move this plan. The company plans to boost the domestic market to compensate for declining international sales. They will actively expand sales channels and marketing activities. But some Huawei executives say the goal is too high to achieve. Currently, Huawei is controlling 34% of China's smartphone market.