THE testicular hydrocele it is a benign disease that manifests itself by swelling of the testicle. Most of the time, this condition does not represent a risk of becoming something more serious. 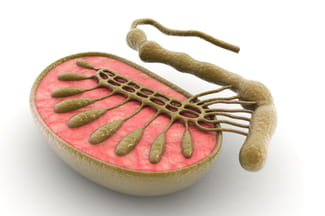 The testicular hydrocele is marked by formation of a cyst – fluid accumulation – inside the testis. It can affect one or both testicles. This disease is more common in newborns, babies up to two years old and adults over 50 years old.

The causes of testicular hydrocele are very different for babies and adults with this condition. Among children, the disease in general is congenital and more common in preterm infants. Fetuses have testicles in the abdomen. During the development of pregnancy, they descend until reaching the scrotum. The channel that makes this passage sometimes takes longer to close and fluids in the abdomen continue to reach the testicles, causing swelling.

Among adults, the problem is usually associated with injuries or trauma in the region that cause an imbalance in the proportion of liquids – which circulate naturally through the area – absorbed by the testicles. Tumors and sexually transmitted diseases also increase the risk of hydrocele in adults.

The characteristic symptom of testicular hydrocele is increased testicular volume, which becomes easier to notice when the cyst forms in only one of the testicles. In addition, in some cases where the inflammation is more pronounced, the patient may complain of mild pain in the affected region. Other symptoms are very rare and are usually linked to other diseases that may be associated with hydrocele.

Initially, the doctor – urologist or pediatrician, in the case of children – will make a physical exam and ask the patient about the symptoms presented. To confirm the diagnosis and exclude other possibilities, the specialist must prescribe the performance of blood and urine tests, as well as an ultrasound scan of the region.

In most cases, in children, clinical monitoring is carried out to observe the evolution of the cyst, once the benign character of the lesion has been verified. The disappearance is usually made in the first year, but, in case of persistence and major discomfort, a surgical intervention can be performed, usually from the age of seven. The adult hydrocele should be operated only in case of pain or disfigurement.

Because it is benign, the testicular hydrocele itself does not represent a risk and, as seen above, does not even require specific treatment since it regresses on its own. However, in some cases it can be associated with sexually transmitted diseases, infections in the region and tumors. In these cases, the secondary cause also needs to be addressed.