From an Anime Fanboy.

In a world where humans live below the surface. In a certain village there were two boys named Kamina and Simon. Simon was a child and his job was a digger. Day by day, with a hand drill, the village where he lived was gradually expanding. But Simon was a shy kid and he was shunned by other kids except Kamina. Kamina was a person, arguably the complete opposite of Simon. The guy is full of enthusiasm, frankness, indomitable will and dog-blood. Forming the Gurren gang, Kamini always wants to one day escape this village, this underground, despite the people in the village trying to stop him, and in fact he doesn’t know anything about the world above. All, just know that there is sky, clear and starry.

The story begins when Kamina tells Simon they can do it, they can escape from this place, the villagers are just fools. The sky in the old days Kamina and his father witnessed was real, and above their heads were not just stone ceilings. In other words this was a prison and up there freedom was what they were looking for and he wanted Simon to see that sky too.

And then fate also answers them. As a matter of fact, Simon, while working, found a humanoid machine, or rather, a human-shaped Mecha, and Kamina named it Lagann. Thanks to their newly found mech, they were able to leave the village and head to the ground. Kamina also soon found another Mecha, naming it Gurren, and combined to form Gurren Lagann. 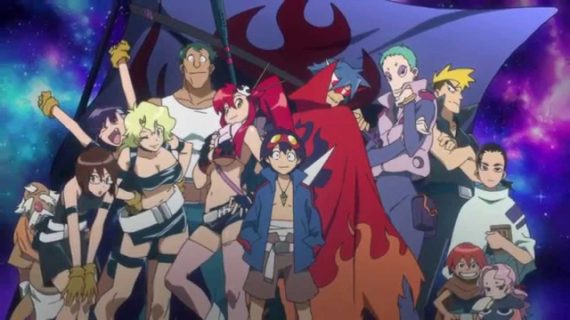 The strength of belief

The new journey gave them a lot to offer. Not only can they see the sky they have longed for, they have met extremely interesting people, making new friends. Simon, Kamina, and teammates in the Gurren gang, they went further than anyone else, together they made extraordinary things, changed their destiny, of all humanity.

Tengen Toppa Gurren Lagann is a story of belief, teamwork, hope and strong will. It is that strong will that helps them defeat their enemies, help them overcome difficulties, help them do extraordinary things. Sounds pretty ridiculous and cliché, right? Yes, the 27 episodes are a combination of a lot of ridiculous things, but …

It is the absurdity that connects everything, so that the story can continue seamlessly. The stereotype made the mech lie right under that village, let Simon find it and begin their journey. The power to operate Lagann, to defeat the enemies in the film is not intelligence, tricks, or talent, simply teammates trust each other, believe in themselves, strength. of will. Whenever their willpower got stronger, so did Gurren Lagann. The burning fire of men, the excitement of every battle, the joy of the journey. Magic, Tengen Toppa Gurren Lagann is the journey of magic. 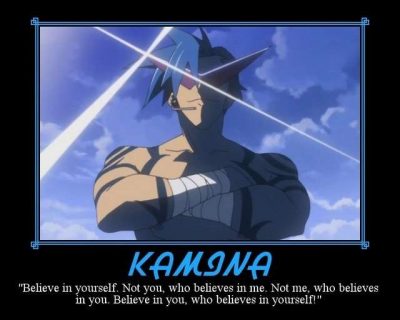 That is the movie, some people like, some people do not, the advice is not to try to understand, but feel, with your heart. It is inherently a fiction film, there is no mistake when there is a lot of absurdity, as long as it does not adversely affect the plot, but instead promotes and creates an impressive highlight. If we have to compare the film with other works, it probably has the sound of the Super Sentai series from a decade or two ago (or in Vietnam it is called superman), the era of Time Ranger, Shinkenger, Boukenger. It has so many in common, the giant Mecha, the bloody battles, the maturity of each character, and even the dark moments that separate the Tengen Toppa Gurren Lagann from today’s Super Sentai and make it more similar to the previous ones. Come to think of it, I actually watched Super Sentai back then, I don’t really need to understand anything, just transforming and fighting was so good.

The film is a journey of magic, but there is no shortage of dark moments. Although known in the end, the bad will fail and the good will win, but nothing is easy, war always only brings suffering and destruction. The post-apocalyptic world of the film is not as dark as the other worlds, but it is not so lacking in emotional climaxes. At times like that, it would rush straight into the viewer like a train train, car after carriage. The movie is like that, it has moments of sadness, is it just that those things are put under the perspective of humor? Maybe. The world in the movie focuses on people. A world where everything has gone back to stone is nothing more interesting than humans. They bring stories. Yoko, the heroine, a super hot and fierce gunner, but hidden deep down is the soul of a teenage girl. Kittan, a man as bloody as Kamina, is someone who is willing to support his teammates at any time. Or Rossiu, a boy the same age as Simon, goes through dark times and does everything for the common good of all humanity. They are like that, there are people traveling all over the land, there are people who fight to protect the communities where they live, there are also people who just want to survive until tomorrow. They have different thoughts, different ways of thinking, but in general, they all have the desire to be free and to live. Anyone in the movie has their own story, including enemies on the other side of the line. They also have their own reasons, their own will. In the movie, nothing is completely wrong or completely right, it all depends on our perspective.

Tengen Toppa Gurren Lagann is a journey of maturity. Simon is a timid boy, but gradually, he becomes stronger and more brave. Kamina too, he is someone who never falters, always moves forward, but he is also sometimes scared, losing faith. And then these thorns, sometimes know how to love. The characters in Tengen Toppa Gurren Lagann, though side-by-side, have an extremely impressive development journey, but no matter what, they are not perfect, and that imperfection is what makes me love them so much, because after all, I see myself in those people. The film also teaches us many other lessons, one of which is a lesson in leadership. The Gurren Gang is a special place, under the guidance of Kamina and Simon, has done extraordinary things. They trust each other, trust their leadership. Every time Kamina and Simon go to battle, they fight not only for themselves but also for everyone, for the freedom of humanity, their will is the driving force, and the magnet that holds the comrades together. Simply put, they became a family.

Tengen Toppa Gurren Lagann, 27 episodes, a special journey, a legendary adventure with beautiful Art, epic Gattai shows, super music from Opening, Ending, even Ost, and billions of billions of other talk about the movie. But here is okay, the rest, please feel free to everyone, give it a chance. I don’t know about everyone, but to me, this is the best Anime if everyone is looking for a sense of excitement, simplicity and seamlessness in the content, and to feel, what is A real man, from a 13 year old Mecha Anime. Here is the opening, and Ending 2 of the series, all of them are very good J-rock songs, I hope everyone will try it out, and there is a short meme that summarizes the content of 27 episodes, so everyone can. watch after completing the movie.

The journey begins with a guy telling a kid that one day they’ll become something great. There is a saying that I really like: “We don’t watch Gurren Lagann, we become Gurren Lagann”. I think it’s right, to me. That is all, wish everyone have fun entertaining moments.

Post Views: 40 LG just announced the Tone+ Free wireless earbuds. They come with fast-charging, special tuning by Meridian Audio and the company promises music up to one hour with just five minutes of charging, or a total of six hours on full charge. LG equipped the set with a microphone, which isnt a surprise, […]

Post Views: 132 Recently, the Thai automaker GPX has launched a model car with an extremely stylish and lovely design called the GPX Popz 125. The car will be a formidable rival to the popular Honda Super Cub in Southeast Asia market. The stylish personality GPX Popz 125 was officially launched in Thailand Designed in […]

Post Views: 220 Despite the configuration of the mid-range / high-end segment, the price of LG Velvet is as high as that of the flagship. After a series of leaked rumors about LG’s new Velvet product line revealed in the past month, today LG has officially announced the new LG Velvet, the first generation smartphone […]