Like smartphones, the tablet market in the third quarter of 2019 has grown again with a modest increase over the same period last year.

Specifically, the latest statistics from IDC showed that tablet production in the third quarter of 2019 reached 37.6 million units, an increase of 1.9% over the same period last year (36.9 million).

Follow PhoneArenaThis is a rare time for tablet production to grow, though not by much. Earlier in the first and second quarters of 2019, tablet sales were down 5% from the previous year.

Not surprisingly, Apple continued to occupy the No. 1 position with 11.8 million tablets shipped, up 21.8% over last year with a market share of 31.4%. 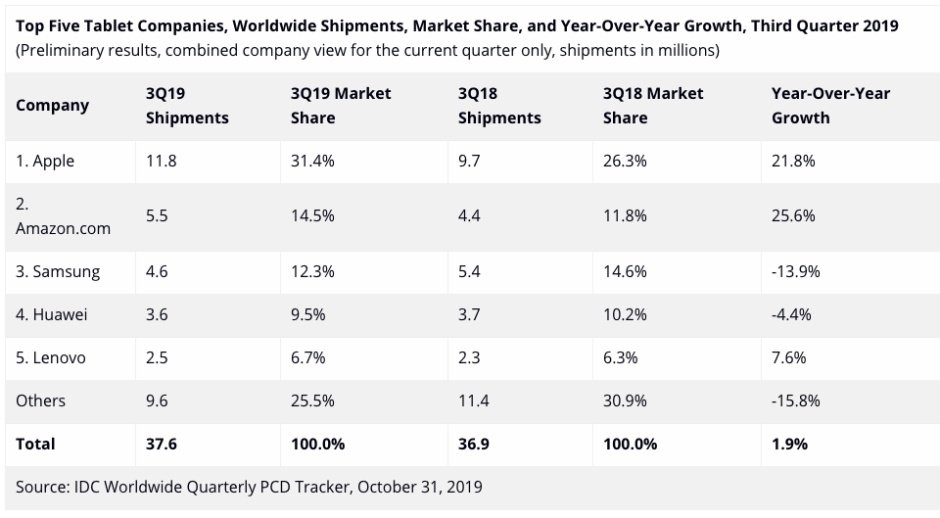 This growth is largely thanks to the recently launched iPad series such as the 10.5-inch iPad Air, 2019 iPad mini or 10.2-inch iPad launched in September.

Despite strong growth in the third quarter, many predict that iPad sales in the fourth quarter will be affected by this year without the new iPad Pro.

Under Apple, Amazon is far behind with 5.5 million tablets shipped in the third quarter, up 25.6%, accounting for 14.5% market share.

The most surprising is Samsung with only 4.6 million tablets shipped, down 13.9% over the same period last year although the Galaxy Tab S6 or Tab S5e were well received.

Huawei and Lenovo took fourth and fifth, respectively, in the sales rankings for this quarter. Before U.S. sanctions, Huawei saw a 4.4% decline while its compatriot Lenovo had a fairly good growth rate of 7.6%.