Most women entering menopause suffer from disorders caused by abnormalities endocrine, physical and psychological condition. The events observed during menopause are related to the lack of estrogen production and vary in intensity according to each woman. 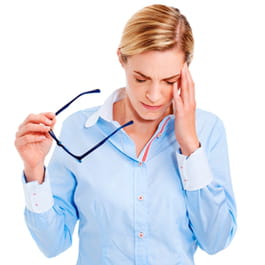 At heat waves are felt by about 80% of women entering menopause. The heat waves appear first in the body and the sensation of heat quickly reaches the face. The duration of these waves varies from a few seconds to up to four minutes. The number of waves varies from three to 20 per day. Women with more than 10 hot flashes per day claim that they alter their quality of life. These heats are more frequent at night, disrupting the woman’s sleep. In many cases, hot flashes begin to occur even in the pre-menopause.

Urinary tract infections are common during menopause. The recurrence of this problem increases the risk of other more serious infections, requiring adequate and complete treatment to avoid complications.

Menopause is often synonymous with sleep disorders, including difficulty falling asleep, frequent awakening and insomnia. These sleep disorders can affect mood and cause irritability, anxiety, difficulty concentrating, and sometimes even depression. The combination of sleeping difficulties and night sweats leads many women to choose to sleep apart from their partners for a few months.

Changes in skin and hair

The decline in estrogen levels results in a drop in collagen and elastin synthesis, responsible for skin elasticity. It is accompanied by dry skin and hair and an increase in wrinkles.

Generally, a slight weight gain of about from 3 to 4 kilos it is observed during the first months of menopause. In case of anxiety caused by menopause, the gain may be higher among women with a tendency to eat sweet and fatty foods when they are stressed.

Menopause can also lead to psychological symptoms: anxiety, depression, sadness, aggravating menopausal manifestations or mood swings. These conditions may or may not be associated with sleep disorders, another characteristic of menopause.

Other symptoms can also appear during menopause, such as chest pain, migraine, joint pain, fatigue or increased cardiovascular risk.