Aorus 17G YD is a premium gaming laptop model, packed with high-performance components, including 11th generation Intel H-series chips and Nvidia GeForce RTX 3000 series graphics cards. Powerful performance levels of Aorus 17G YD allows you to easily conquer any game with the highest configuration level. The article reviews in detail Aorus 17G YD, from which point out the strengths and weaknesses of the product line. 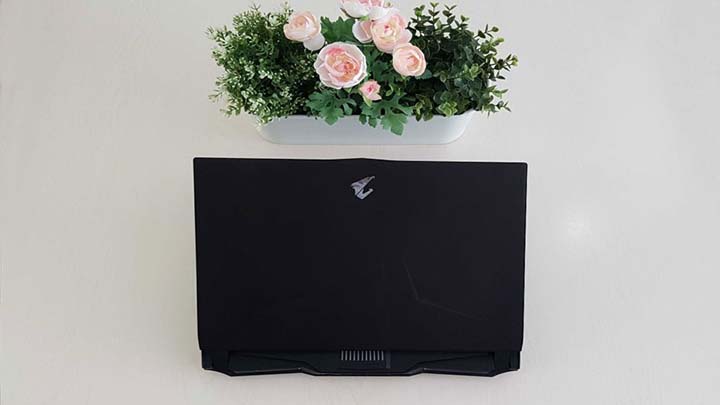 The Aorus 17G YD possesses an impressive build quality in every detail. The laptop’s aluminum exterior is machined with a high degree of precision and detail, giving the laptop a premium look.

Unlike the Alienware laptop with an outer shell design adorned with RGB lighting details, the only luminous detail of the Aorus 17G YD is the logo located on the lid.

The device is equipped with a pair of sturdy and sturdy hinges, which help keep the screen from wobbling during use. The screen of the machine is wrapped inside by an ultra-thin 3mm bezel, giving a modern look to the gaming laptop.

However, to do that, the company had to move the position of the webcam to the bottom edge of the screen. This webcam placement will bring many annoyances during actual use. However, the 720p webcam itself has pretty good image quality, and has the ability to physically close the lens when not in use. 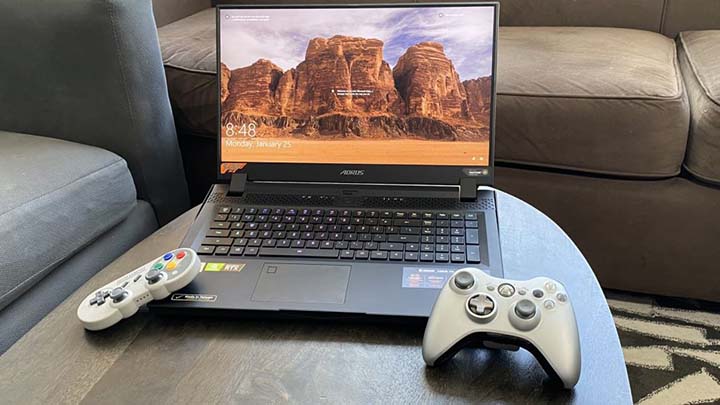 Aorus 17G is equipped with a screen with a refresh rate of up to 300Hz, helping all animations displayed on the panel be shown in a smooth and flexible way. The screen uses an IPS panel, has a resolution of 1920 x 1080p, has a wide viewing angle and is treated with anti-glare. According to the manufacturer, the screen is capable of covering 72% of the NTSC color range.

The strange thing is that the Aorus 17G is not equipped with any frame synchronization technology, such as the Nvidia G-Sync feature of the m17 R4. However, the fact that the screen supports a 300Hz refresh rate makes this omission not too much of an impact on the gaming experience. During actual use, we did not notice any frame tearing when playing games with frame rates above 3 digits. 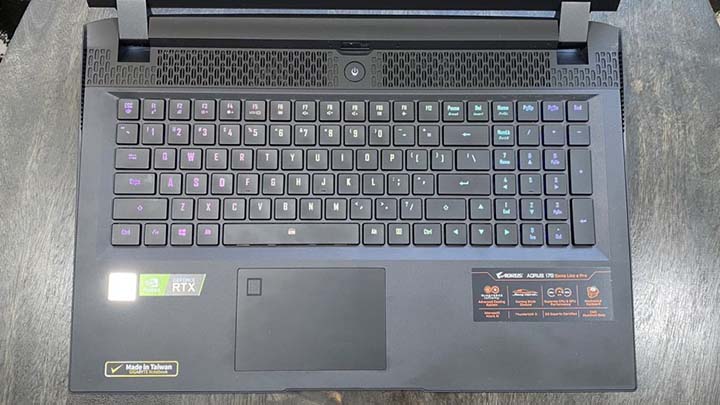 One of the points that makes the Aorus 17G YD different from most gaming laptop models on the market is the mechanical keyboard set. The buttons of this keyboard set have deep travel and have very responsive tactile feedback, giving me an extremely comfortable typing experience.

The keyboard’s illumination can be adjusted through the Aorus Control Center settings app. The software also allows you to change the glow effect of each button on the keyboard.

The touchpad of the machine has a spacious surface area, allowing us to control the mouse pointer easily and seamlessly. Located on the left corner of the touchpad is a one-touch fingerprint scanner, allowing users to quickly log in to the system securely.

The Aorus 17G YD has a fairly wide body design, so it has enough space to fully equip different types of ports. Along the right edge of the laptop, you’ll find a Thunderbolt 4 port, a USB 3.2 Gen 1 Type-A port, a Mini DisplayPort 1.4 port, and an HDMI 2.1 port.

Meanwhile, on the right side is an Ethernet port, an SD card reader, two USB 3.2 Gen 1 Type-A ports, a headphone jack and a microphone jack.

The Aorus 17G YD version that we used in the review is equipped with an Intel Core i7-11800H chip, an Nvidia GeForce RTX 3080 graphics card and 32GB of DDR4 RAM. The machine is equipped with a single SSD with a slightly low RAM capacity of 512GB.

In the performance test in this article, we will compare the scores achieved by the Aorus 17G YD in different benchmarks with gaming laptops in the same segment, specifically including Lenovo Legion 7i, Gigabyte Aero 15 OLED XC, Alienware m17 R4 and MSI GE76 Raider.

Using PCMark 10 to test the CPU’s processing ability, the Aorus 17G YD achieved an impressive score of 7157, leading the comparison group in the article. The machine also has quite good results when performing the internal memory speed test through the PCMark 8 test, with the recorded result of 5097 points.

To test the graphics processing capabilities of the laptop models in the comparison group, we used 3DMark’s Sky Diver and Fire Strike 2 tests. The comparison models are all equipped with Nvidia GeForce RTX 3080 cards, but Aorus’s Max-Q series cards have a slightly lower performance level. This makes the score achieved by the Aorus 17G YD on these tests slightly lower than that of competing models.

During actual use, the Aorus 17G YD delivers a smooth gaming performance. Specifically, in the game Far Cry 5 (Ultra configuration), the gaming laptop achieved an average frame rate of 115 fps.

Continuing to test the gaming performance of the machine with the game Rise of the Tomb Raider (Very High configuration), the Aorus laptop reached a frame rate of 132 fps, much higher than the segment average. 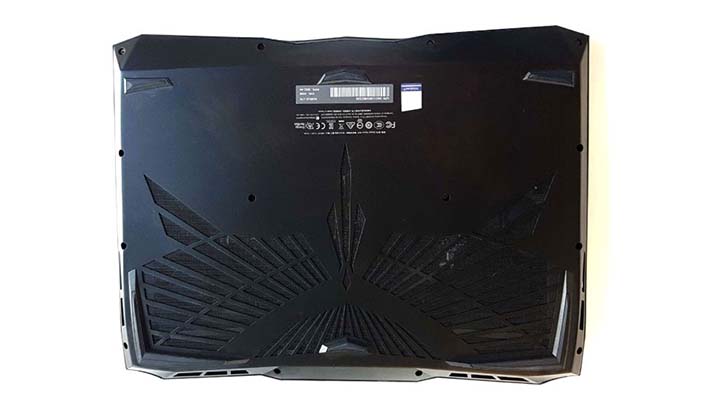 In this test, we will measure how long the device can withstand when running an HD video with brightness and volume levels at 50 and 100% respectively. Before performing the test, the machine is switched to battery saving mode, disconnected from Wi-Fi and turned off the keyboard RGB light.

The Aorus 17G YD achieved a result of 5 hours 48 minutes, equivalent to the battery life of the GE76 Raider. The opening time of both laptops is more than twice as long as the m17 R4’s results (2 hours 33 minutes), but worse than the Gigabyte Aero 15 (8 hours 45 minutes) and Lenovo Legion 7i. (8 hours 30 minutes).

Aorus 17G YD is equipped with a relatively efficient cooling system, which helps the laptop not experience thermal overload during gaming. However, sometimes to help keep the machine’s heat level from being overloaded, the laptop’s ventilation fan system will operate at high capacity, causing loud noise. 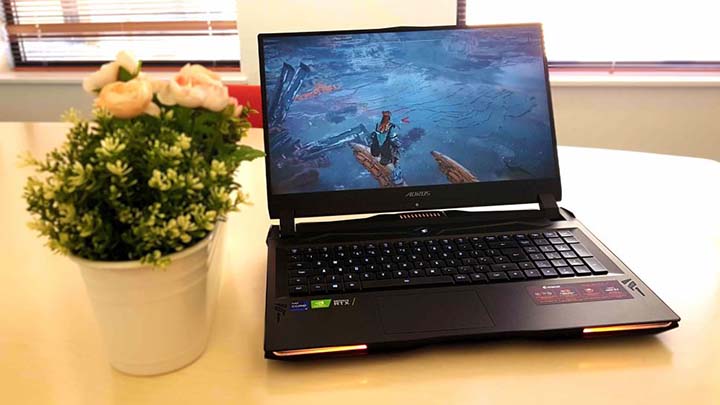 And not only does it have an impressive level of performance, the laptop also has a brilliant screen with a refresh rate of up to 300Hz. If you have a well-off economic condition, and are looking for a high-end gaming laptop model on the market, then the Aorus 17G YD will be an option worth checking out.