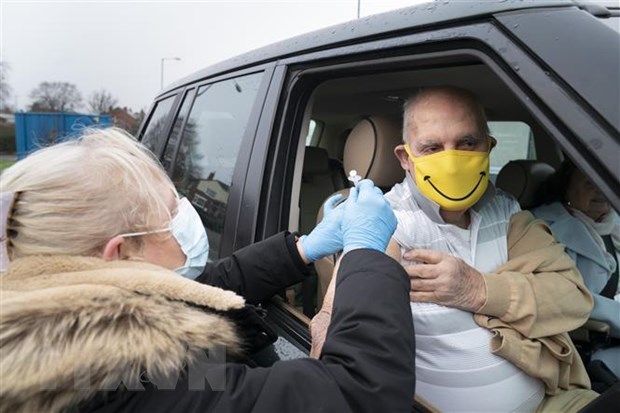 According to the Vietnam News Agency in London, an analysis by the Financial Times showed that hundreds of thousands of people in the UK who do not have a car will struggle to reach immunization centers COVID-19 nearest.

This will increase concerns about the allocation of centers vaccinations in the UK’s ambitious COVID-19 immunization program.

The UK government plans to vaccinate about 15 million most vulnerable people in the country by mid-February.

The Joint Commission on Immunization, the advisory body for the UK government, has set nine priority groups for COVID-19 vaccination, including staff, the elderly in nursing homes, people over 80 years old and The front-line health workers are among the first priority group.

Doctors and campaigners say the decision to focus on age as a criterion for vaccination has been detrimental to people living in low-income areas where poor health can occur early. 20 years more than the richer population groups.

Since the UK started its vaccination program on December 8, 2020, the National Health Service Authority (NHS) has been rapidly expanding the number of vaccination sites.

There are about 1,220 vaccination sites currently vaccinating those considered most vulnerable in the UK.

Under the UK government’s vaccine distribution plan, the country aims to set up more than 2,700 vaccination points across the UK.

However, an analysis of FT data from TravelTime shows that about 5.5 million people in the UK are living in areas more than an hour away from the nearest vaccination center on public transport, of which, an estimated 336,000 people do not have a car.

Meanwhile, Richard Vautrey, a general practitioner in Leeds, North England, representing the British Medical Association’s family of family doctors, said the possibility of setting up vaccination sites in some cases. is “limited by geography,” especially in rural areas, it is harder to find suitable locations.

British health officials said the program vaccinations The country has mobilized community pharmacies, networks of family doctors as well as larger immunization centers and care homes across the country to participate in a nationwide network of immunization points.