Should you buy an old Ford Ecosport?


The 5-seater car model is quite popular, but Ford EcoSport still receives many mixed reviews. This makes many people wonder whether to buy an old Ford EcoSport car or not?

Ford EcoSport car model is like an SUV version of Ford Fiesta because these two cars have quite a lot in common in terms of design and utility. With EcoSport, this model was officially introduced to the market in 2012, distributed from the 2013 version of the car and until the old version of 2017, it still belongs to the first generation of Ford EcoSport. 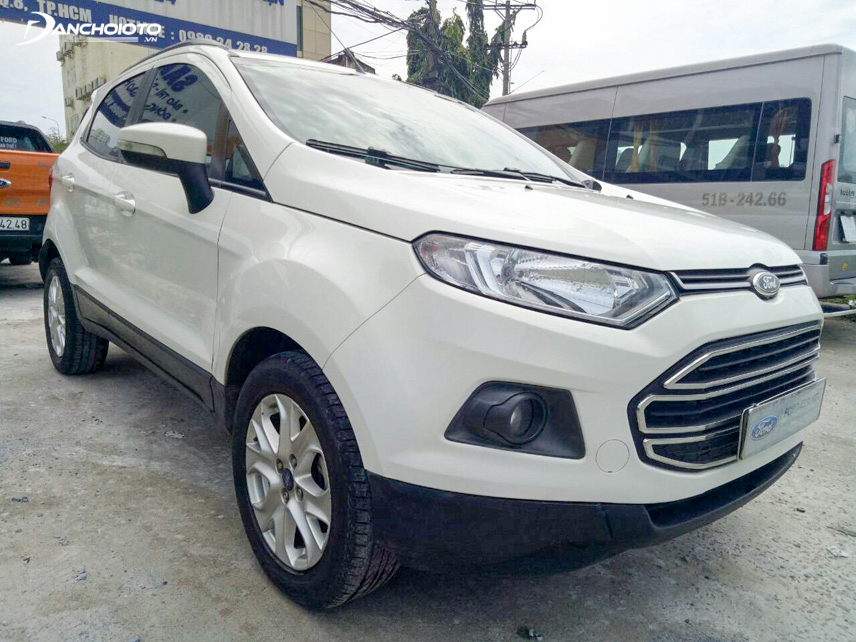 EcoSport sold in Vietnam depending on the model of car that has from 3-5 versions. These cars all use 1.0L or 1.5L engines combined with 5-speed manual gearbox or 6-speed automatic transmission. Vehicles are divided into regular versions, Trent and Titanum. Ford EcoSport versions only differ in terms of the number of drive units as well as interior upgrade options.

Currently, users can buy the old Ford EcoSport from 2013 to 2016 with prices ranging from 480 million to 560 million depending on the actual situation and the vehicle version. The oldest EcoSport cars were only produced 5 years ago, so most of them are still very good quality and can be used immediately after purchase without much repair. This is the strength of the old Ford EcoSport line of cars compared to many other older SUVs.

It is no coincidence that Ford EcoSport cars received the support of the market after only a short time. This model is strongly invested by Ford, so it has many advantages and great strengths. Typically as:

Price is quite good compared to many other competitors

Compared to many other 5-seater SUV models, the Ford EcoSport is relatively “soft” and affordable. For example, the direct competitor of Hyundai i20 Active used from 2015 to 2016 is priced from 520 million to 600 million. Moreover, EcoSport is integrated with many new gadgets and technologies, which are relatively attractive to young customers. It can be affirmed that good selling prices, old cars are not slipping as fast as Korean cars are a good advantage for old Ford EcoSport cars to continue competing in the segment of small SUVs in particular and 5-seat cars with high ground clearance. old in general.

Right from the 2013 car life, Ford EcoSport car has been evaluated very well in terms of design. The front of the car gained attention with the design of thin claw headlights, polygonal grille and fog lights arranged symmetrically. The body is relatively “muscular” with many embossed lines to create blocks and create angles. Overall, in terms of design, Ford EcoSport has a “American” feel, strong masculine feeling and very youthful. 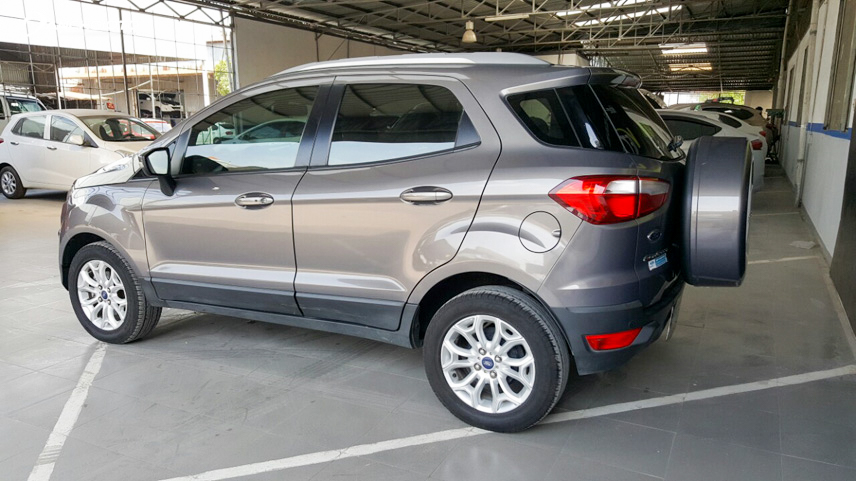 EcoSport has a quite muscular body thanks to many embossed veins

In addition, the body and exterior paint of the car is relatively quality, so even the cars from 2013, if carefully maintained and free from collisions, are still new and the exterior equipment is still in good condition. On the other hand, EcoSport car is also designed with a ground clearance of up to 200mm. High undercarriage helps EcoSport wade well and have the ability to adapt to a variety of terrain.

Ford Ecosport old car Ford owned quite a lot of utilities and accompanying technology. The control panel in the car is designed in a style similar to the 5-door Ford Fiesta, the luxurious leather steering wheel incorporates quite a lot of navigation keys. Utilities in the car are quite diverse with air conditioning system very fast and deep, speaker music player relatively quality. Vehicles also equipped with a small screen to display the parameters and manipulate the entertainment system. In general, in terms of utility, the old Ford EcoSport car is relatively good quality for money.

Safety equipment is the strength to help the old Ford Ecosport become one of the options to buy an old high-priced five-seater car with the price of VND 400 million, considered by many car owners in the old small SUV segment. Vehicles equipped with up to 7 airbags around the car, anti-lock braking system ABS, EBD, electronic body balance … These features help the driver more easily manipulate the car and help users peace of mind than when driving. 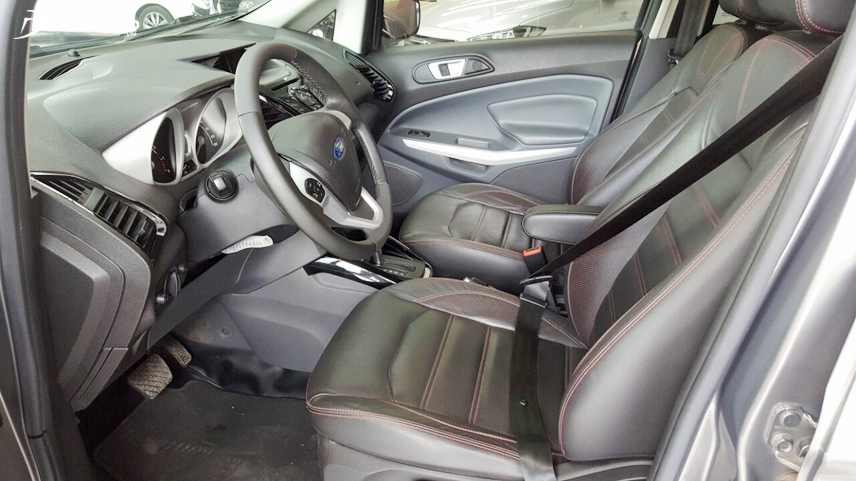 Besides the strengths, the old Ford EcoSport line also has some major disadvantages such as:

The engine is not really optimal

Ford EcoSport versions distributed in Vietnam use a 1.5L engine. However, this engine line of the car is not really optimal in terms of fuel economy and performance when compared to some of the top 5-seat SUVs in the other segment. In addition, the “less optimal” of the engine also makes EcoSport cars operate less stable at speeds above 100km / h. Therefore, many users are expecting Ford to add an Ecoboost engine version to turn EcoSport into a high-priced 5-seater old car in the segment. 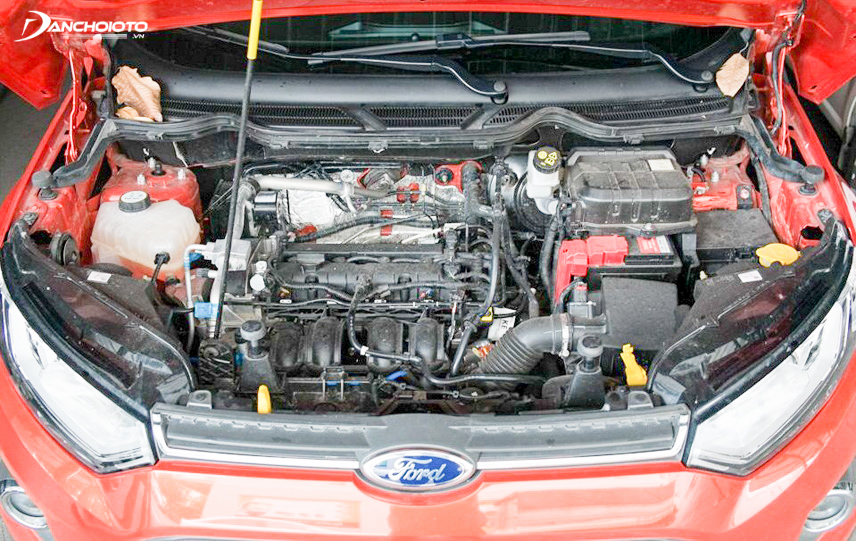 The assembly details are not yet “standard”

Right from the exterior, the vehicle owner can easily detect the unmatched assembly marks due to the large gap between the steel plates of the copper frame. Similarly with the interior of the interior compartment, the details are not assembled, creating hollow lines quite clearly. This makes the car often make annoying clicking noises when going through bumpy roads, especially in the old Ford EcoSport 2014 models back and forth.

Some details are still unreasonable in the design

Overall, the exterior of the old Ford EcoSport is relatively good. However, the car still has unreasonable details. First, the A-pillar of the car is relatively large, so it affects quite a lot of the visibility of the driver, if not familiar, it is relatively difficult to control the car through tight corners. Next, the company designed a spare tire on the rear of the car, so the length of the body increased and new drivers could break the spare tire if backing up carelessly.

Because newly put into use, Ford EcoSport has not revealed many disadvantages in terms of errors, damage … However, in general, this 5-seater high-rise car still receives many positive feedbacks, especially the ability. operate in the street, especially flooded cities like Hanoi and Ho Chi Minh City. Ho Chi Minh. So, right now, car owners can also consider choosing an old Ford EcoSport car as a means of transportation for themselves and their families with prices around 400 million.