Shingeki no Kyoujin: The Final Season – 10


For all that one could say about Shingeki no Kyoujin’s final act – and Lord knows, that’s a lot – one thing that’s easy to sleep on is just how weird this series gets.  Don’t get me wrong, AoT was always a strange one, what with Isayama’s drunken-subway faces and random passages of surreal dialogue.  That’s definitively part of its charm.  But while those things are still with us, the plot itself is getting weirder and weirder.  Maybe when series are as massively successful as this one editors lose most of their terrifying sway over a mangaka’s life, but I think there’s more stuff happening here than there really needs to be. 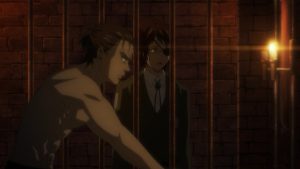 I don’t know about this whole Mikasa-Hizuru thing, which seems very tacked-on to me and lacking any urgent purpose in the larger story.  It’s cool to tie Japan into things I suppose, and it allows the author to turn some of his historical revisionism inwards in a more direct way.  But it’s very left field to have Mikasa reveal that tattoo at this point in the anime, and indeed to bring Hizuru in as a major player in the first place.  I suppose you had to have some kind of revelation about Mikasa’s past because it’s been kind of hanging out there since the start of the series, but this all feels very disconnected. 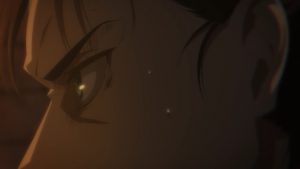 Much more reassuringly familiar are the absurdist conversations, like Hange’s “two fights” with Eren (though that was mostly a monologue to be fair) and the Conny-Sasha “idiot” exchange.  That was one of the funnier passages from the entire series I think, as the light came on in Conny’s eyes when he realized Sasha was such a big idiot that she didn’t even realize she was an idiot.  Conny was involved in another very funny moment when little Levi visibly seethed at seeing how tall Conny had gotten.  That kind of stuff makes me with AoT would try and be intentionally funny a little more often.  Hange’s comment about how Erwin “only made one mistake” was by contrast unintentionally funny – and that Isayama clearly believes it himself is properly disturbing. 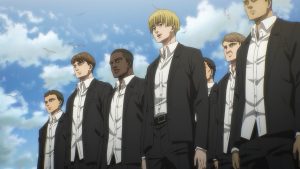 As for the overarching plot, again, I just feel like it’s more complicated than it needs to be.  At its heart this is really about Eren going in two years from where he was (trying to save Historia from a cruel fate and obsessing over not passing on his burden to any of his friends) to deciding that basically wiping out civilization with The Rumbling was the only answer.  Just show us that – show us how all Armin’s theoretical doors get slammed shut in his face, and how his transformation alienates Eren from the others, and cut out a lot of the excess baggage. 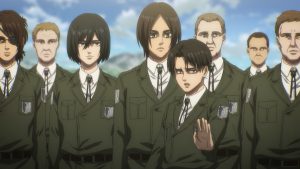 Shingeki clearly gets at something with these intimate moments, like the old gang (in flashback) riding the rails and trying to pretend there’s hope for the future, and Conny and Mikasa clashing over Eren’s reaction to Sasha’s death.  “Intimate” isn’t a word you hear used in reference to this series very often, but it’s something Shingeki can be surprisingly good at.  Everything about this series is “big” and has been from the beginning, right down to the title, but I think it works best when it doesn’t try too hard to deliver what it probably thinks the audience is expecting.