Shingeki no Kyoujin: The Final Season – 07


No politics to speak of.  And the best episode of the season for Attack on Titan.  Is that a coincidence?  Obviously not.  The allegorical choices Iseyama makes are a crushing weight bearing down on this series, so a break from them is a welcome respite – and freed of that weight the narrative has a chance to finally take flight.  The respite is going to be short-lived, unfortunately – the way the plot has been rigged makes that unavoidable – but I’ll enjoy it while it lasts. 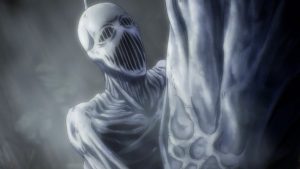 The curious sensation here – and once again I’ll say I’m not sure whether this is the intention or not – is watching a tremendous (in every sense of the word) battle play out here with no rooting interest in either side.  We had three seasons to have Eren’s case made to the audience.  And while I admit he’s never remotely won me over as a character, I don’t think that even really matters because Eren has become a terrorist and the self-appointed bringer of destruction to the world.  Even if you think he’s justified (and I just might) it’s hard to literally root for a guy like that. 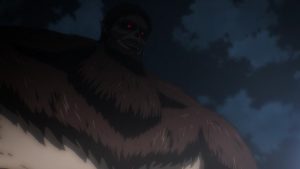 Three seasons for Eren, only six episodes for most of the Liberio crew.  Even so there is a sort of recency bias here, which almost but not quite makes you forget that Marley is basically Nazi Germany.  And the fact is, Falco is probably the closest thing to a genuinely decent person Shingeki no Kyoujin has introduced since Armin – good and unspoiled, anyway.  He’s an innocent both literally and symbolically so Falco at least I sort of hate to see taken out.  Reiner is a very sympathetic guy (admittedly sometimes you can just leave the “sym” out) but you can’t forget Wall Maria and other moments from earlier on the series.  He’s got plenty of blood on his hands. 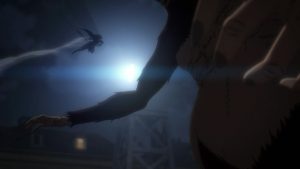 Speaking of Armin, he finally does make his first appearance of the season.  And it’s quite an entrance – he sneaks into the harbor on a tiny sailing boat and transforms into the Colossal Titan, wiping out the entire Marleyan fleet (whatever portion of it was in the port anyway) in one fell swoop (though he does stomp all the ships to dust just for good measure).  If Armin was in any way morally distinct from the others, that’s gone with the wind now.  He’s killed thousands personally and masterminded (he does make time to praise Erwin – pardon me while I puke) this deadly invasion plan.  It would be one thing if it was in the name of some greater good, but- that’s not really what we’re talking about here, is it? 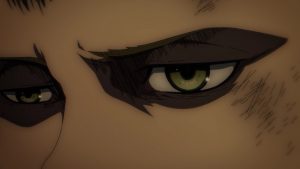 The plan, as you would expect given the deviser, is a peach.  The Marleyans are one step behind at every turn, their titans are being taken down one by one (including Zeke seemingly, though it’s hard to believe he could be gone from the series that anti-climactically), and they seem to be running out of cards to play.  Poor Reiner would just like to become a tree and leave this mortal plane, but Falco and Gabi (she really should have been named Screechi) just won’t let him moulder in peace.  Reiner is burdened with the greatest curse a character in this series can have – self-awareness. 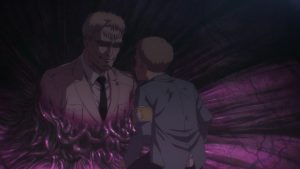 Leave Shingeki to its own devices and it can always do what it did here, deliver shock and awe with the best of them.  The whole sequence with Eren using the Jaw Titan – after its limbs were systematically liberated (it’s just a flesh wound) – to destroy the War Hammer was a masterpiece of screaming, over-the-top, nerve-scraping chaos.  That rush, along with a sort of morbid curiosity, is what keeps me coming back even with all the unwelcome baggage The Final Season is carting with it.