I’ve rewatched Seirei no Moribito a couple of times already, and it’s at around this point where I always have second thoughts.  Do I really want to subject myself to the emotional rollercoaster of this last stretch of episodes?  You’d think knowing what’s coming would dull the impact but it never has for me.  At each instance I’ve always powered past this hesitation and finished the series, and none of those instances involved me actually writing about it.  But that’s the great unknown here – is committing my reactions to the page going to make it less traumatic, or more? 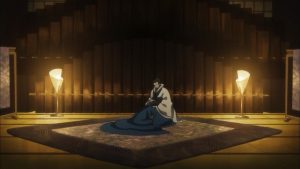 Over the past few episodes Shuga has become more and more of a power player in the story.  In fact, it wouldn’t be so much of a stretch to say he’s the main plot driver in many respects.  Shuga is clever to be sure, but not so clever as he imagines.  The Holy Sage has been onto him since the door incident, and tracking his movements.  The Holy Sage is smart too, and much more experienced in court intrigue than Shuga.  He knows that if Shuga is right about Chagum, this is a way to keep himself informed of what’s really happening.  And if he’s wrong, he can denounce and punish him without being caught up in it himself. 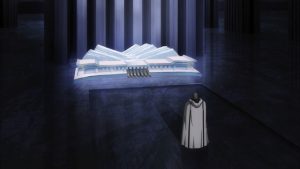 Shuga is not wrong, of course – as Mon verifies after he and the Hunters follow Shuga to the Valley of Deadly Mists.  This is game-changing information in every sense, all the more so with Prince Sagum’s death.  Poor Shuga didn’t even know about that until Mon told him, but he doesn’t let his grief blind him to what needs to be done.  And he shows he has balls of steel by asking the Mikado – in the Holy Sage’s presence – to let him take charge of the hunt for Chagum.  Shuga is a remarkable young man to be sure – brilliant and totally fearless – but one thing he isn’t is judicious. 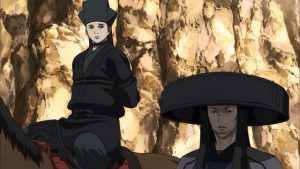 With the Hunters at his disposal, tracking down Balsa and Chagum proves relatively easy, and the path leads directly to Touya.  Zen and Yun (#3 and #4) are the key to this.  Zen worms his way into Touya’s confidence as “The Chief”, a builder and customer, and Yun uses his photographic memory to copy the names and locations of everyone in Touya’s ledger.  As Jin says, the main job of the Hunters is not combat but information gathering (though they certainly have to do their fair share of both). 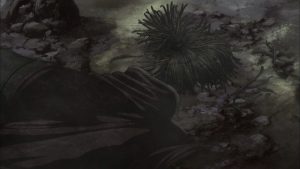 As I watched this episode the first time, a thought occurred to me quite strongly at this stage in the story.  Why is it necessary to kill Balsa at this point, and why does Shuga make no attempt to convince the Hunters that another approach might be possible?  If they’ve indeed come to take Chagum home – indeed, to make him Crown Prince – in theory her job is finished.  Shuga can’t know the full details of either the Nyunga Ro Im or the deep bonds that have formed between Balsa and the Prince, but from his perspective this approach would seem to make a lot of sense.  Is he so tunnel-visioned that it just never occurs to him? 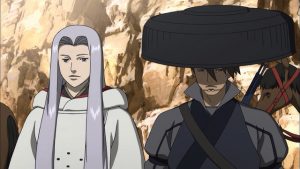 There’s precious little of Chagum and Balsa in this episode, but what there is serves as a reminder of just how much their relationship has deepened.  There’s an easy familiarity between them now, and when she praises his way with words or jokes that she might need to carry him on her back again on their walk to Toumi Village.  Balsa basically can’t watch Chagum at this point without breaking into a grin – and that makes what’s coming all the more heartbreaking.  If only love were enough to bend fate, these two would be able to surmount any challenge by now.