You can add “exposition” to the list of things Seirei no Moribito does better than almost any other anime.  You look back over these episodes and realize how intimately we now know the story of Jiguro and Balsa, yet it’s almost entirely through suggestion and inference.  It underpins so much of this series thematically (and just as much so the novels which progress the plot past this point), but we come to understand it as we come to know these characters, not through extemporaneous speeches. 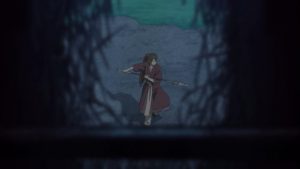 This episode could hardly have been simpler in construction, yet it remains very subtle and profound in execution.  Balsa takes Chagum (who she notes is still speaking like a noble and not a town child) on an errand to have her spear re-forged.  We learn of an old Yogo superstition that a noble who sees a sword being forged will never be a great warrior (there’s a gorgeous callback to this later), and Balsa gently teases Chagum about this.  After they pass through the smithy district, she takes him to her destination – the forge of an old swordsmith set apart from the others, at the edge of the woods. 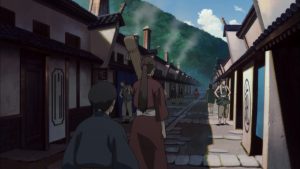 This little workshop – two rooms – is the setting for the remainder of the episode.  No voices are raised in anger, never mind fists or weapons – but it’s as exciting in its own way as Balsa’s duel with the Hunters among the rice paddies.  The old sword-maker (played superbly by longtime seiyuu Hori Katsunosuke) has a history with Balsa – that much we can see.  Just how deep that history runs will not become clear until later, but the swordsmith is also a favorite of the royal guard (clearly, he’s the best), and he makes it clear that Balsa’s request to forge her a new spear puts him in a bind. 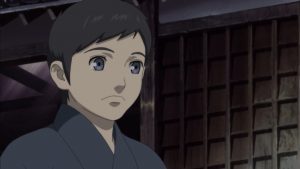 The way the old smith takes charge of the situation is masterful to say the least.  He hides Balsa and Chagum in the storeroom as his next clients arrive to pick up their blades – Mon and Jin of the Hunters.  He means to get to the bottom of the rumors he’s heard, and he means to do it without betraying Balsa’s secret unless he’s convinced it’s the right thing to do.  He has Balsa helpless to do anything but sit and wait as he draws the two men into a conversation about the nature of swords, Yogoese swords, and his own swords.  He talks of his ambition to forge a perfect blade – one that can “cut the bonds of Karma” – and of the one warrior he’s met in his long career who was worthy of such a blade. 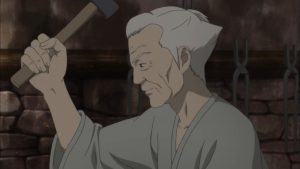 Again, Kamiyama’s writing (none of this is in the novel) is so masterful in telling us the story behind the story.  Rather than boastful pride about his great skill, the swordsmith feels regret that his swords are, in the end and the main, merely tools to end lives.  Even the one great warrior, for whom he forged his ultimate blade (it was a spear rather than a sword, but he withholds that information) used it to take the lives of six men he loved who were sent to kill him, acts which tormented him until his dying day.  All of this he did to protect the life of a friend’s child – which he succeeded in doing, but at the cost of everything he held dear and ultimately his own life. 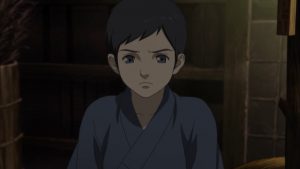 We learn so much about so many here – not just Jiguro, but about Balsa and how her ideals and morals came to be.  And about the swordsmith himself – what he values and believes in.  And about Mon and Jin too, who understood that the woman they were hunting was a great warrior and a noble spirit worthy of their respect and admiration.  And if we learned all that you know Chagum learned it too, because little pitchers have big ears, and he absorbs and processes everything he takes in with his keen intellect and depth of empathy. 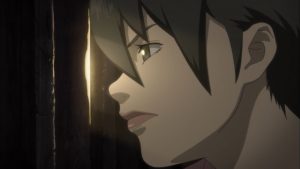 It’s all marvelous in its simplicity, the setting the perfect metaphor for the story itself.  The tension is high as this battle of wills plays out, everything riding on the judgment of the swordsmith as he weighs the words he hears and the reactions of the others to the words he speaks.  It could all go pear-shaped in an instant, taking only one word or act from the smith to unleash the chaos and bring everything crashing down.  But it never does, because in the end he chooses right over duty, and recognizes that there may be one last chance for him to forge the blade that can fulfill his aspirations, and one warrior than can wield it.