It would be pretty fair to say I’m a bit flummoxed by Kyokou Suiri after two episodes.  I’m pretty sure I like it, but not at all sure what to make of it.  It’s an odd duck to be sure, but thinking back on Zetsuen no Tempest (likewise based on a source material by Shirodaira Kyou, though the In/Spectre manga is written by Katase Chasiba) a couple of things stand out.  One, it took a good while before I got caught up in that show – the better part of the first cour.  And two – this is a writer who really likes to have characters deliver long speeches while everybody just stands around. 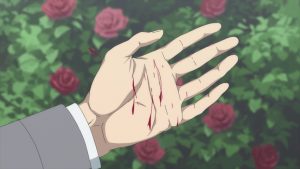 I don’t want to make too much of it, but there does seem something distinctly light novel-ish in Kyokou Suiri stylistically.  The fact that Shirodaira is a creator who works in both mediums sort of makes sense – his work seems like something of a hybrid between the two.  I confess I’m worried that Kyokou Suiri is a one-cour show, because it seems to take quite a while for Shirodaira’s stories to really find their sea legs (at least for me) , but he certainly writes interesting situations and characters in a distinctly quirky way. 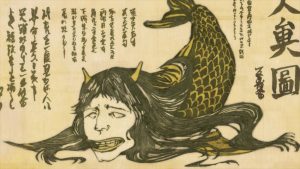 This episode was apparently taken from quite a bit later in the source material and moved here, presumably to establish Kotoko’s daily life as a Goddess of Wisdom.  She’s still in hot and rather presumptive pursuit of Kurou, who remains somewhere between bemused and peeved by that.  What we learn about him here is interesting – he ate mermaid scales as well as part of another youkai he’s not disclosing, which explains why his body heals itself and why other youkai fear him.  But the fact that this happened when he was eleven – the same age as Kotoko’s kidnapping and ascension as a Kami – surely can’t be coincidental. 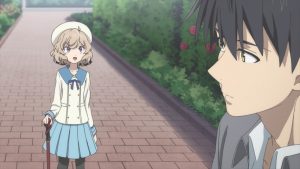 As we pick up the story Kotoko has been summoned to the mountains to try and placate a local Water God who’s upset about the dumping of a corpse in his swamp.  She tries to get Kurou to accompany her but he begs off, declaring that he wants to enjoy the pork miso soup he made the day before.  He sends her on her way with a thermos of soup and a bento, but keeps one of her little servants – presumably to guide him to her when he decides to follow her later (which he of course does). 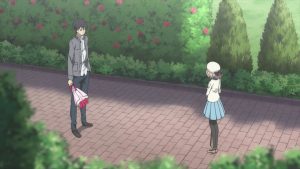 This scene in the mountains is classic Shirodaira, and it’s very weird.  The Water God is hilariously OCD, picking apart every little lie Kotoko tells him in an attempt to defuse his anger over what happened.  This scene, well…  It just goes on forever and ever.  And then longer.  Kotoko keeps rewinding back on the story of the woman who supposedly killed the man and certainly dumped his body in the swamp, her story changing little by little as the Kami’s skepticism forces her to reveal more and more of the truth.  Meanwhile Kurou hides behind a tree, listening to all this play out (I’m surprised the Kami couldn’t sense him there, if he’s as terrifying as the youkai we’ve met seem to think). 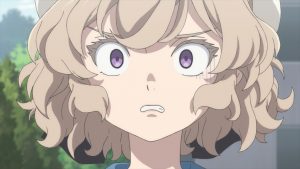 Is In/Spectre in fact a detective series?  One could almost get that impression from this episode, but I’m not going to jump to any conclusions with a show this weird.  In all honestly the story Kotoko was telling wasn’t interesting enough to justify its length, and it’s still not over – it’s actually spilling over into next week’s episode (though apparently not all of it).  Yes, that all went on too long – but still, there was something strangely compelling about all this.  Shirodaira has an ear for dialogue, make no mistake – that should certainly have been obvious after Zetsuen – and Kotoko and Kurou are intriguing enough to make an interesting focal point for the narrative.  I’m rolling with it for now, but it’d be foolhardy to have any presumptions where this series is concerned.

Your Name – All the Anime