I gotta be honest here – I still don’t know what the hell to make of Dorohedoro.  On the one hand, its manic energy combined with the fact that it’s so unabashedly batshit nuts has an intoxicating quality to be sure.  But on the other, it wouldn’t be accurate to say that I like it at this point.  Even if there’s a narrative rationale behind what appears to be wholesale gratuitous violence and gore (which it’s already apparent there probably is) it still feels like gratuitous violence and gore.  And so far there are times when I find watching Dorohedoro distinctly unpleasant. 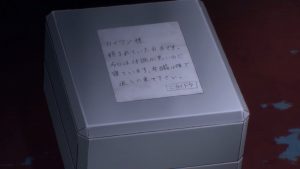 It’s worth repeating that I have no idea how much of this is an issue with the material itself and how much the adaptation, never having read the former.  As far as the anime goes the only thing I can specifically point to as an issue is the CGI, which isn’t omnipresent but sticks out like an ugly, distended thumb every time it’s used.  On the other hand the runaway truck nature of the narrative is something the anime certainly deserves credit for, because the adrenaline rush that provides is the best thing Dorohedoro has going for it at this point. 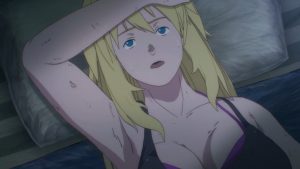 I’d be curious to know whether the fact that I don’t especially find anyone on either side sympathetic is by design, or just the series failing to get me to buy what it’s selling.  I certainly get that the sorcerers are the aggressors here (at least superficially).  They pop through magic doors and mutilate muggles magically, they pollute the air of Hole with toxic magic rain.  But a lot of the ones we meet come off as just kind of regular people.  And Caiman and Nikaido take way too much pleasure in killing them (and do it too regularly) for me to feel any sign of righteous indignation on their behalf when they do.  Am I not reacting to the good guys the way I’m supposed to, or are they no actual good guys in this story? 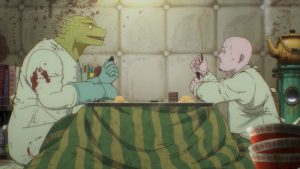 We’re not really getting all that much exposition at this point, so this episode played mostly like a bloodbath.  Starting with the sorcerer in a trash bag getting tossed in the incinerator by Caiman (he begged for it) and going downhill from there.  En’s hitmen played by Hosoya Yoshimasa and Kobayashi Yuu had fun killing a bunch of people and abducting a rogue sorcerer for En to torture, Caiman and Nikadou (what was all that “not feeling well” stuff foreshadowing, I wonder?) to see a sorcerer named “Needle” about maybe fixing his face and killed a bunch of people on the way, and a bartender with an eldritch nightmare for a head sprayed toxic spittle over them and in their beer (that part was kind of funny).  Oh, and Caiman shed the skin on his face and En fed his flunkies mushrooms made from people. 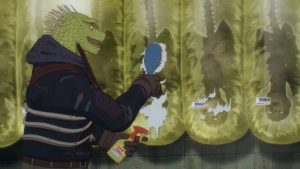 So we have a lot of obviously connected but currently disjointed bits of information, a bunch of unlikable characters at war with each other, and a constant stream of graphic violence.  That’s not much to grab onto, but there is something about this series that commands your attention – as distasteful as it as I don’t find myself wanting to look away.  There’s way too much pedigree here to bail at this point, but I’d really like to see Dorohedoro do something to endear itself a little more and pretty soon, too – we’ve only got 10 more episodes to go.