Samsung Galaxy A50 review: A brilliant mid-ranger at a great price


The Samsung Galaxy Series doesn’t begin and end with the S and Note lines. Samsung’s flagships may get all the attention, but you don’t become the biggest smartphone manufacturer on the planet by ignoring those without the best part of a grand to drop on the latest handset.

That’s where the Samsung Galaxy A50 comes in. At a glance, it looks like the Galaxy S10, but it’s a very different beast for those that don’t need the very fastest processor or all of the latest bells and whistles.

Samsung Galaxy A50 review: What you need to know

The Galaxy A series is very, very confusing. What you really need to know is that the Galaxy A50 is currently the second-best in the lineup, just behind the A70. It’ll soon be third when the A80 is launched later this month. That makes it better than the A10, A20e and A40, broadly speaking.

What that translates to in real terms is a 6.4in device that looks like a Samsung Galaxy S10 but is cut down on the insides. An octa-core 2.3GHz Exynos 9610 processor, which powers the phone, is roughly equivalent to the Snapdragon 675 which confusingly powers the Galaxy A70. The phone is also supported by 4GB of RAM and 128GB of internal storage.

Impressively, for the price, the Samsung Galaxy A50 comes with a triple-camera array on the back, with a depth sensor and ultra-wide lens accompanying the main 25-megapixel snapper. The A50 also comes with Samsung’s usual Super AMOLED screen, which is impressive when rivals in this price bracket often plump for cheaper IPS displays. Doubly so when it also includes an in-screen fingerprint reader.

So, what’s the damage? Well, a pretty reasonable £310 wouldn’t you know. That’s actually quite a bit cheaper than many of Samsung’s other smartphone offerings, so its closest rivals come from other manufacturers.

First up, there’s our favourite mid-ranger, the Google Pixel 3a. A cut-down version of Google’s flagship, this version is a bit slower, isn’t as impressively built and drops a few features to come in at £399, but is already selling for around £350. On a similar note, the P30 Lite is a cut-down version of Huawei’s P30 series and sells for £329.

Alternatively, there’s the flagship in mid-range clothing, the Xiaomi Pocophone F1. This is a handset that somehow manages to cost just £329 despite containing 2018’s fastest Qualcomm mobile processor. Finally, there’s the Nokia 8.1, which started out at £380 but has been going for far cheaper than that lately.

That’s some pretty strong competition, but the Samsung Galaxy A50 is off to a great start with looks that owe a great deal to the Galaxy S10. That means there’s virtually no bezel to speak of, although this version does see a return of the notch for the front-facing camera. Here, however, it’s more of a notchlette – a tiny indent at the top of the phone.

Like the S10, there’s a very small chin at the bottom of the phone, but it’s only really noticeable because the other sides have next-to-no bezel to speak of. The back is slightly curved, and it’s plastic rather than glass, which should make it a little more durable. It’s still the kind of handset you’d want to protect with a case of some kind, mind.

Most excitingly for a handset of this price, the fingerprint reader is built into the screen, meaning that it doesn’t appear on the handset itself. Just push your thumb against the bottom of the screen, and the phone unlocks – perhaps a hair slower than with a regular one, but it’s still a great feature at this price.

In terms of other features, as usual Samsung does very well indeed. Expandable storage? Check: microSD cards of up to 512GB are supported. Headphone jack? Present and correct. Dual SIM? Yes, sirree. The two downers I can find are that it has no waterproofing, and it doesn’t support wireless charging, but you can’t have everything for this price.

If Samsung is known for one thing with its phones, it’s the quality of its displays. And this Super AMOLED screen doesn’t disappoint – this time around you’re looking at a 6.4in panel with a resolution of 2,340 x 1,080.

The screen displays 100% of the sRGB spectrum and, in the basic screen colour mode, manages to present colours very accurately indeed. The other modes – photo, cinema and adaptive – are all a bit more vibrant, but you can’t say you’re not given the choice.

Being AMOLED, contrast is perfect, and brightness isn’t too bad either, hitting a peak luminance of 560cd/m2 on automatic mode (though it caps at 350cd/m2 if you set it to top brightness yourself, presumably for battery reasons.)

In short, it’s about as good a screen as you can expect for the price – better, in fact, thanks to the addition of the in-screen fingerprint reader.

So far, so good then. But how does Samsung’s homebrew Exynos processor compete with its Qualcomm brethren?

Before I answer that question, a quick recap. The Samsung Galaxy A50 is powered by a 2.3GHz Exynos 9610 processor, with 4GB of RAM and 128GB of internal storage. In day to day use, this feels buttery smooth, unlocking quickly and jumping between apps with ease. But how does it do on the benchmarks?


With one obvious exception, it’s all much of a muchness. The Samsung Galaxy A50 outperforms everything in its price bracket (including, amusingly, the £60 more expensive Galaxy A70), but not by enough of a margin to make things too clear cut.

Except for that exception: the £329 Xiaomi Pocophone F1 wipes the floor with everything in this price bracket. No huge surprise given it uses the same chip that the Samsung Galaxy S9 had in the US last year, but it’s pretty obvious what you should do if you want to maximise the bang for your buck.

It’s a similar story when it comes to graphical grunt, though here the Galaxy A50 fares slightly worse, coming behind the Snapdragon-powered Pixel 3a and Nokia 8.1. The Pocophone F1 is an even clearer winner, of course.

But the Samsung Galaxy A50 has one major ace up its sleeve, and that’s battery life. Our video wasn’t actually long enough to get it all in, so it started to go round a second time, clocking in at a massive 21hrs and 21mins before the 4,000mAh cell finally shut down. Only the extra 500mAh of the Galaxy A70 has it beat, where it managed an enormous 25hrs and 22mins.

The Samsung Galaxy A50 treats us to not one, not two, but three rear-facing cameras. The main 25-megapixel, f/1.7 camera is supported by an ultra-wide eight-megapixel affair and a five-megapixel, f/2.2 depth sensor. It would have been nice for one of these to be a telephoto zoom, but I’m probably asking for the moon on a stick considering the generous specs we’ve been given for the price. This makes it a pretty good match for the £329 Huawei P30 Lite’s triple-camera array (48-megapixel, f/1.8 with an eight-megapixel wide lens and a two-megapixel depth sensor). And while the Samsung Galaxy A50’s shots look pretty good from a distance, when you zoom in, it’s clear that the Huawei P30 Lite has the edge.

Which isn’t to say the Galaxy A50 is bad, by any means. And given Huawei’s uncertain Android future, you may well consider the slight loss in fidelity is a price worth paying. On low-light indoor shots, the cameras are more evenly matched, with both providing images filled with detail, accurate colours and very little noise. Good job, both, though Huawei once again slightly has the edge.

For video, the Galaxy A50 is capable of shooting in full HD at 30fps. If you want 4K or 60fps (not both at the same time, mind), you’ll need to drop an extra £60 on the Galaxy A70. That said, the video quality is pretty good and the image stabilisation seems solid enough for shaky hands.

The front-facing selfie camera deserves a little shout out too. It’s a 25-megapixel affair with an f/2.0 aperture. This might be overkill for Skype calls and selfies, and even with beauty mode switched off, Samsung still insists on taking away all your wrinkles and giving you a weird, alien glow in the Samsung camera app. 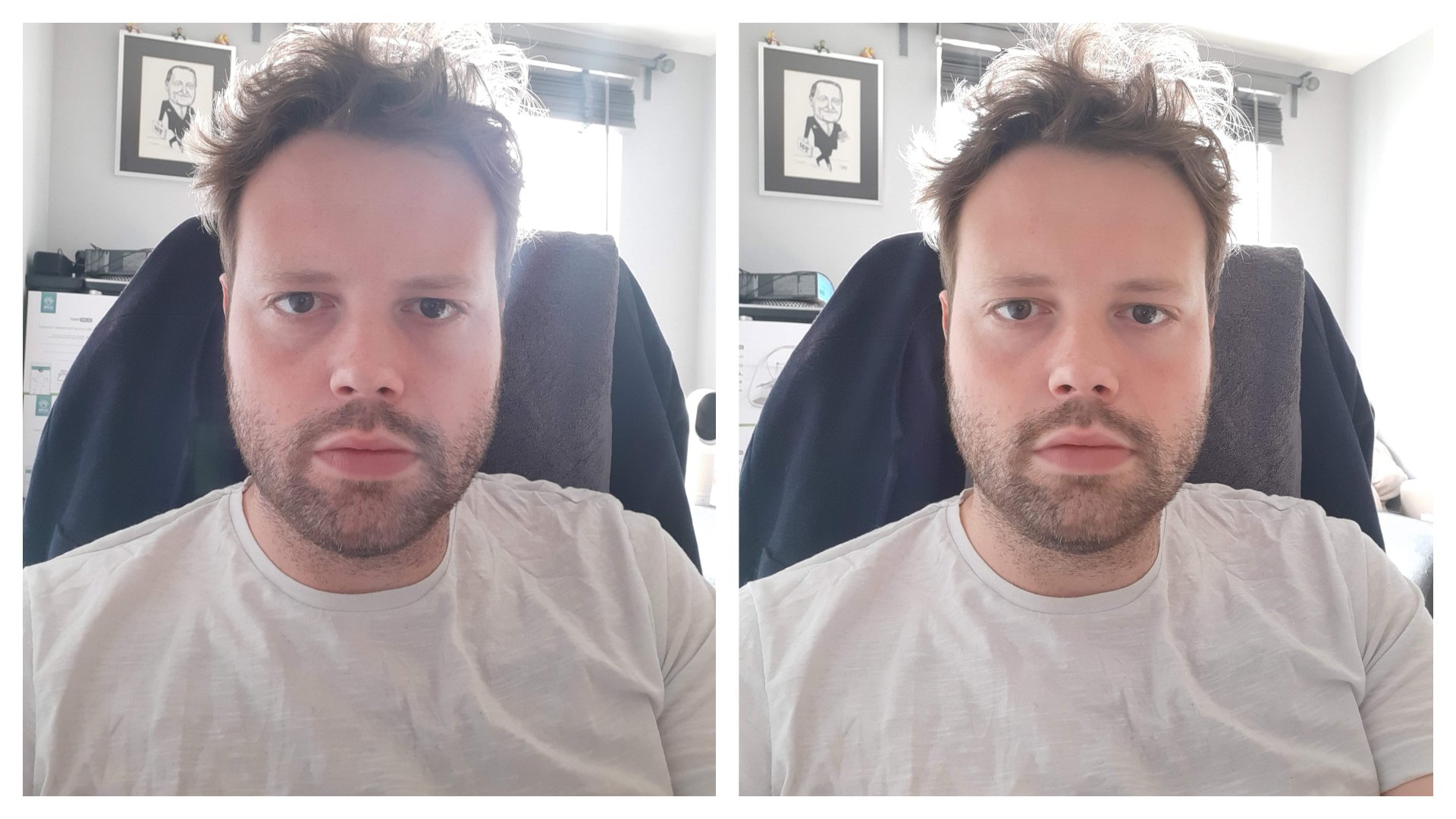 That might be considered a plus for some, but be warned Instagram abusers of smartphone beauty modes: you’re not fooling anyone.


Still, if that’s all you can say that’s wrong with the Galaxy A50, then Samsung is doing something right. Very right, in fact.

If you want more speed, it’s worth looking at the Xiaomi Pocophone F1 for an extra £20, and if you like a cleaner version of Android it might be worth springing for the Pixel 3a. But for most people, you won’t do much better for the price.