Galaxy Watch 42 mm version is reduced by 3.4 million, to 3.6 million. The program applies at some systems in Ho Chi Minh City.

Galaxy Watch returned to Vietnam at the end of 2018. Compared to its predecessor, this model was upgraded with battery life, design innovation and sleep analysis capability.

In terms of appearance, Galaxy Watch has many similarities with the Gear S2 Classic with slimmer edges. The watch has 2 sizes including 46 mm for silver color and 42 mm for smaller version in black and rose gold.

Currently, some retail systems in Ho Chi Minh City are adjusting the price of Galaxy Watch 42 mm pink version. Accordingly, this model is reduced by 3.4 million, to 3.6 million. The program applies from 14 to 16 June.

According to Mai Trieu Nguyen, director of a mobile phone retail system in Ho Chi Minh City, Galaxy Watch pink version still has a lot of goods, so it is difficult to sell, so the company reduces prices to make it easier for customers to access.

Nguyen added that this discount program is combined with the company to bring a comfortable price to customers. The profit from these programs is not much, so not all systems will do it.

Some other large systems also have programs to reduce Galaxy Watch from 400,000 to 1.2 million VND for both black and pink versions. The advantages of this model include a round watch face, a rotating border and the Always On Display feature, which simulates how a mechanical watch works. 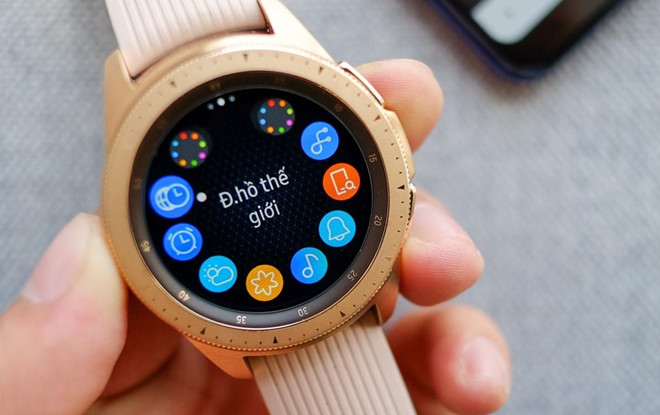 The weakness of this model comes from a low capacity battery, about 2 days of use. Discounted products are only pink, suitable for female users more than men.

Post Views: 61 Grab has announced its partnership with Unilever Food Solutions (UFS) to launch the contest “Vietnamese delicacies 2019”. The partnership aims to create a playground for chefs and restaurants to promote their talents, absorb new culinary trends, as well as the opportunity to expand their business and reach more users through GrabFood. As […]

Post Views: 52 Caviar, a Russian brand specializing in very high-end personalization of smartphones, strikes again by offering this time an iPhone 11 Pro at almost 7000 euros. He adopts the lines of the Cybertruck in a dress made entirely of titanium. Credits: Caviar Because there is an audience for everything, even the most expensive […]

# Food seems easy and difficult! ? Stir-fried meat and vegetables made with new rules of scales from eyes[Volume stir saves summer (1)]

Post Views: 11 A hot summer, when you lose your appetite. I want to take good nutrition so I don’t get fat. In such a case, “stir-fried food” is definitely recommended, as it allows you to quickly get protein and vegetables with one item! Stir-fried food that seems to be easy, and has no worries […]