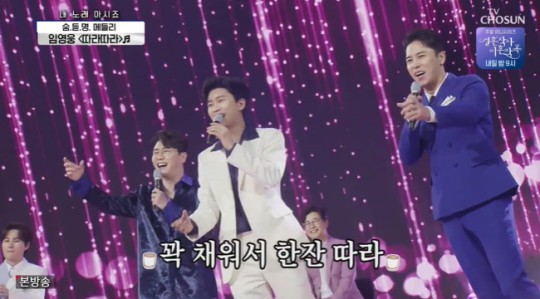 Jang Min-ho, Lim Young-woong, and Young-tak showed off their songs that are being re-examined after appearing in’Mr. Trot’ as a medley.

Lim Young-woong introduced the stage, saying, “We thought it was a mangok (a bad song) among us, but after’Mr. Trot’, a lot of fans listened to it and asked me to sing it a famous song.

First of all, Young Tak sang’I love you’ released in 2007. This song was about sending love, and Young-tak sang with desperate sensibility and treble, and Jang Min-ho and Lim Young-woong also added strength with the chorus.

Following this, Lim Young-woong showed a stage that inspires positive energy with’Follow Follow’, which was released in 2017, and Jang Min-ho also sang the 2017 song’Men vs. Men’ in the final step. Lim Young-woong and Young-tak gave a big smile while adding an atmosphere with a brilliant chorus.