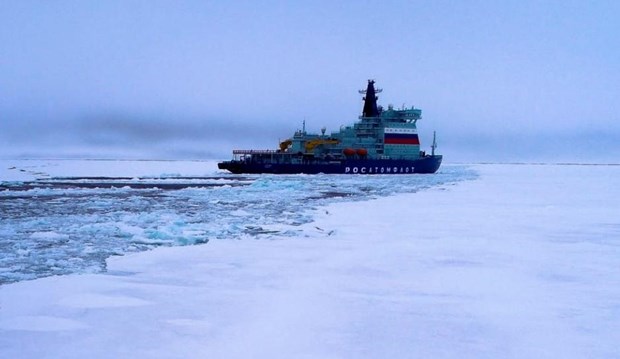 Photo is for illustration only. (Source: North News)

According to the VNA correspondent in the Russian Federation, the warships have been damaged stranded on ice at the Baltic Fleet’s main base due to an unusual frost in the Kaliningrad province. The new generation of tugboats were sent to the rescue from a harbor in the Baltic and broke the ice up to 50 cm thick. The new tugboats are high speed, maneuverable and can be pressed against the warships to free them from the ice.

Every day as many as five ships of the Baltic Fleet aided ships left the dock to clear the waters and clear the way for warships.

Earlier, it was reported that the Arkady Filatov ferry carrying passengers was trapped in ice near St. Petersburg. A nearby tug Shluzovoy 99 came to assist, broke the ice and then pulled the ferry ashore. There are 19 people on the ferry, they have to ask for help at minus 27 degrees Celsius /.