There’s nothing too complicated going on with me here – I really, really like this show.  Like it both in the critical and personal sense, as in feeling real affection for it.  It’s rare that my feelings for a new series are so straightforward and clear-cut.  But then I have no baggage with Runway going in – I’ve never read the manga, I care not a whit about the fashion industry in real life, and the show is employing no trickery or short cuts to get the job done.  There’s some serious quality on display here at every level, and that makes all the difference.

Not having any emotional connection going into this series doesn’t mean I don’t care about what’s happening – it just means I can do so without any preconceptions.  The characters here are really winning and quite interesting and believable.  And goodness me, what a tonal shift we got after last week’s ending, which made Runway de Waratte seem like a feel-good story about two plucky kids taking the world by the throat.  This week was a reminder that when they come true at all dreams don’t come true without serious blood (literally), sweat and tears, and that not everyone is a kind soul trying to open doors for you where you didn’t know there were doors. 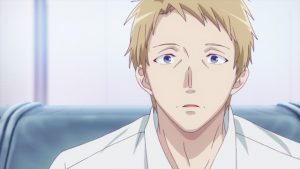 I don’t use that language coincidentally, because Runway is a story that puts me very much in mind of Joseph Campbell and his notion of “following your bliss”.  Campbell said “Follow your bliss and don’t be afraid, and doors will open where you didn’t know they were going to be.”  In a quite magical and affecting way, we see Ikuto and Chiyuki doing that – especially Ikuto, it must be said, and especially this week.  One can see the competing impulses at war in him – common sense and humility struggling with ambition and the surefire knowledge of what it is he wants to do.  That surefire knowledge is his bliss, and only he can make the decision as to whether he can – and will – follow it. 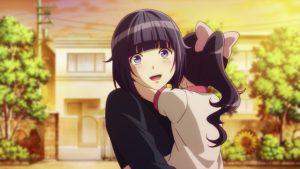 If a happy ending in the first episode seemed a little incongruous, it’s because it wasn’t actually either.  Once Kenji finds out Ikuto is in high school – it turns out he believed otherwise because Chiyuki lied to him and said he was in college – he immediately rescinds his job offer.  But it’s for his daughter that Kenji saves his ire, and he comes off quite differently than he did in the premiere.  He scolds his daughter in Ikuto’s presence, and declares that she has “no talent”.  Ikuto mans up here and takes the fall for what happened, and I honestly was hoping Chiyuki would put a stop to that right then and there.  That she stayed silent and let him do it was not her most endearing moment as a character, but it serves as a reminder that she’s only human and still a kid. 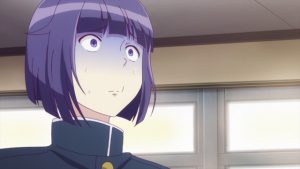 However, Chiyuki does redeem herself quite a bit by refusing to let Ikuto wallow in his disappointment and give up.  She isn’t only doing this for her own sake – it’s clear she genuinely cares whether Ikuto chases his dream.  She more or less shames him (hey, it works) into going back to her father for another chance.  And while he doesn’t hire the lad, Kenji-san does send him to one of his former designers who’s started his own company – Yanigada Hazime (Suwabe Junichi).  Chiyuki offers him a free warning that Yanigada is more a porcupine that a lamb, but that could hardly have prepared Ikuto for what was coming. 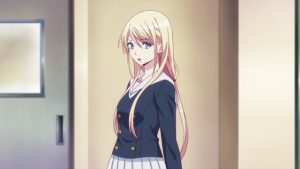 Yanigada is a piece of work, to be sure.  His company is a guerrilla outfit run out of an apartment and selling on the internet, and when Ikuto arrives his two clothiers are passed out from exhaustion.  Maybe this isn’t totally normal, as it is Tokyo Fashion Week, but it’s clear Yanigada Hazime is going to be a tough place to work.  And Ikuto can’t hide the truth – he has no formal training and doesn’t understand how the profession works.  The kindly but defeated Moriyama-san tries to help where she can, but Yanigada immediately fires Ikuto for failing his sewing audition.  This is where we see Ikuto really at war with himself – clearly, he’s not possessed of much self-confidence – but thanks to Chiyuki’s tough love, he realizes the other path leads to a bad end. 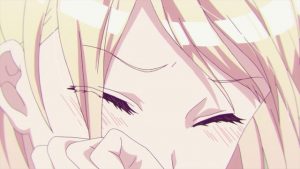 Honestly I never would have believed a fashion show could be so riveting, but that’s this series’ skill in making us care about the characters.  It’s chaos, especially since one of Yanigada’s models has cancelled and he’s had to beg his old boss for a sub.  That Kenji sends his daughter could be read multiple ways, but I take it to mean that he genuinely believes she does have talent, and his harsh rebukes to the contrary were a means to test the strength of her resolve.  Ikuto gets a little culture shock at the realization that there’s no time for modesty backstage at a fashion show, and everyone is focused on the moment at hand – because for a newbie designer with buzz, Tokyo Fashion Week is make or break.

Yanigada is tough to like at this point, but I’ll take it as read that he’s a genuine talent (I would be the worst judge you could imagine).  And Moriyama’s collapse means that it’s not only Chiyuki who gets her chance to be a last-minute sub, it’s Ikuto – because Yanigada designs clothes, he doesn’t make them, and a dress meant for a 180 cm model is a nightmare on a 158 cm body (even if the waist is the right size).  Last week’s big break was a mirage, but this one has the sense of one that’s real – not least because it would land Ikuto on the first square of the board, not crossing the finish line.