In addition to 3.5mm headphone jack, Galaxy Note 10 also does not support expanding storage capacity because it is not equipped with microSD card slot.

MicroSD card slot is a feature only available on Galaxy Note 10 Pro?

According to Weinbach sources, neither the standard version nor the Pro of the Galaxy Note 10 will have a 3.5mm headphone jack. Samsung has added "a fake headphone jack" to the test device to fool people, and anyway the standard Note 10 also lacks a microSD card slot.

This information can completely be based on the prototype, instead of the actual product that Samsung will sell to the market in the near future. However, this is still an interesting revelation, especially the cheaper Galaxy Note 10 will not be able to expand storage capacity via microSD card. 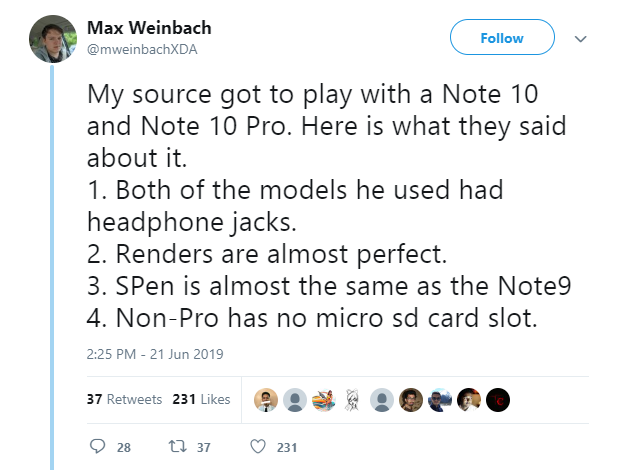 Galaxy Note 10 will be the first flagship of the Note line with a perforated screen design, like what we have seen on the Galaxy S10. According to the Weinbach, the SIM tray will be placed in the upper right corner of the standard Note 10, but this is also the position of the S-Pen pen when not in use. Because of having to keep the S-Pen (featured in the Note series), the company had to adjust the design of the SIM tray and this led to the decision to remove the microSD card slot.

Post Views: 20 Born in skepticism, the Ducati Hypermotard multi-purpose raking car line has proven its own ability as one of the main models of the Italian motorcycle maker. The production of Ducati Hypermotard From Ducati’s research center in Bologna, an engineer came up with the idea of ​​a supermotard with a 1,078 cc engine […]

Post Views: 160 Not long ago, JBL firm – A big man in the world of sound industry introduced their gaming headsets including Quantum 200, 300 and 4000, marking an extremely new step. Today we would like to rate the JBL Quantum 400, which is the most advanced of the newly released 3 gaming headphone […]

Post Views: 114 Meizu has just launched the Meizu 16s Pro phone with a similar design to the 16XS version but has very strong hardware integration. It owns the Snapdragon 855+ platform, the screen supports a touch sampling frequency of up to 160 Hz and UFS 3.0 memory. Meizu 16s Pro has the same design […]

One Reply to “Rumor: Galaxy Note 10 will not have a microSD card slot”