Synopsis The Royal Space Force, which has been ridiculed as “just a failure” and “an army that does nothing”, is looked down upon by the world as a failed army of the Kingdom of Oneamis.Quote-Wikipedia

This is the origin of GAINAX

This work is a theater animation work made in 1987.
This work is the first work by “Gainax”,
Yoshiyuki Sadamoto and Hideaki Anno, who are famous for Eva, are also participating.
The average age of the staff is 24 years old, which is a youthful work. 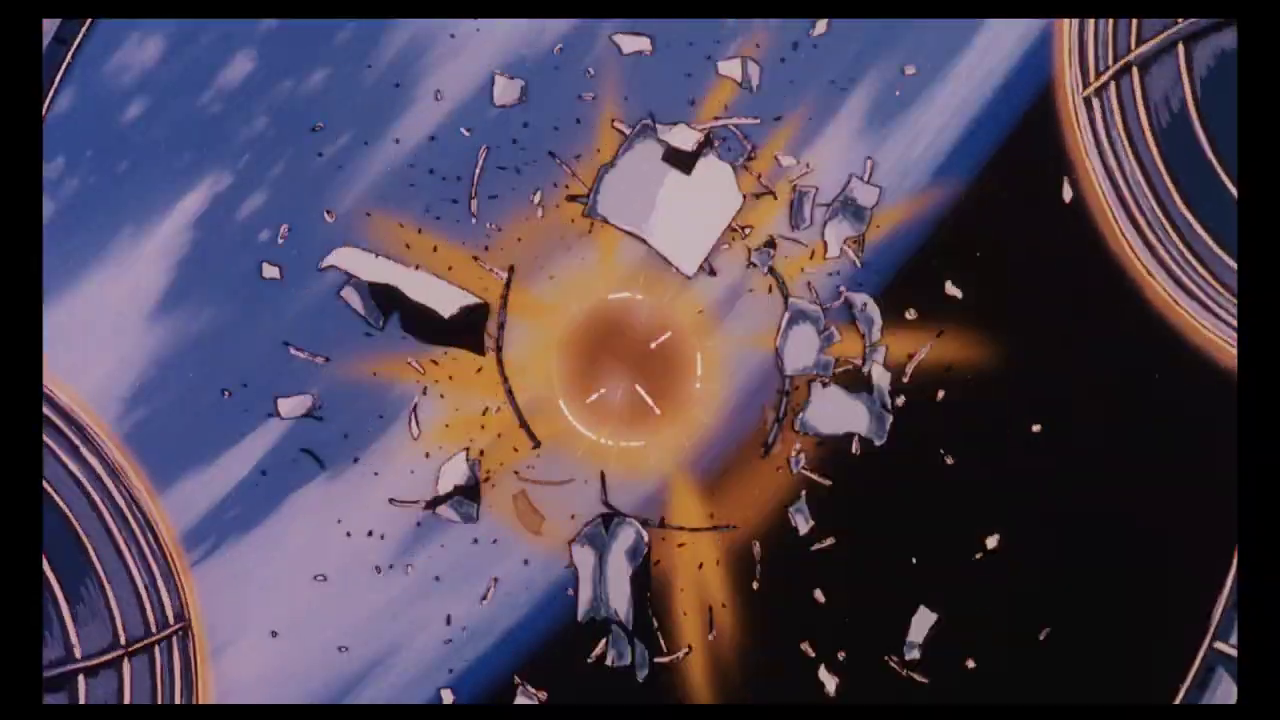 The story begins with a narration by “Leo Morimoto”.
He plays the main character in this work, and the story that begins with his solitude
A unique and tasty atmosphere is created.

The “Royal Space Force of Oneamis” is said to have fallen out of the world.
The Space Force in an era when it is not realistic for humankind to go to space
The existence itself is strange, and in such an era, such a space force
The hero who is falling out belongs,
He spends his money in the red-light district and leads a self-deprecating life.

It’s different from Japan and overseas, it’s somewhat different from our world, but it’s similar.
Such a fantastic yet realistic view of the world,
A lot of unique costumes, accessories and machines to show the world view
It also has an idyllic atmosphere.

That Hideaki Anno was still an animator in Studio Ghibli
There is a part that makes me feel somewhere, even though it is a GAINAX work
The atmosphere of Ghibli is left somewhere. 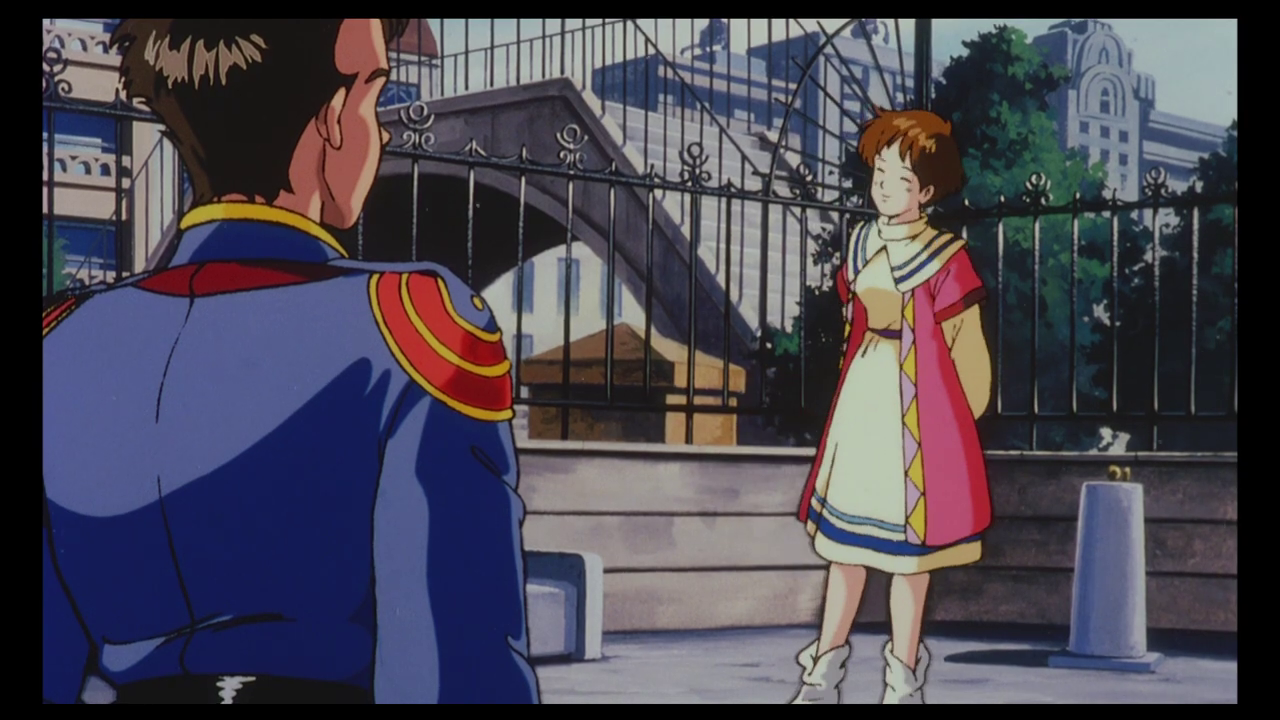 The main character, Shirotsugh Lhadat, is a simple person.
Visiting a girl’s house preaching religious teachings in an entertainment district with “downheartedness”
The girl praises her work.

That alone will motivate you to do your job and make you feel sick.
This work combines “man’s simplicity”, “man’s romance” and “man’s weakness”
You can say that you are drawing.
The simple protagonist is motivated to work by being praised by women,
Volunteer to become the first “astronaut” of humankind.

It’s that simple. There is no clearer reason.
I was just motivated by the compliment of the woman.How simple a man is
It ’s simple enough to say,
As the hero becomes serious, the space forces around him also become serious. 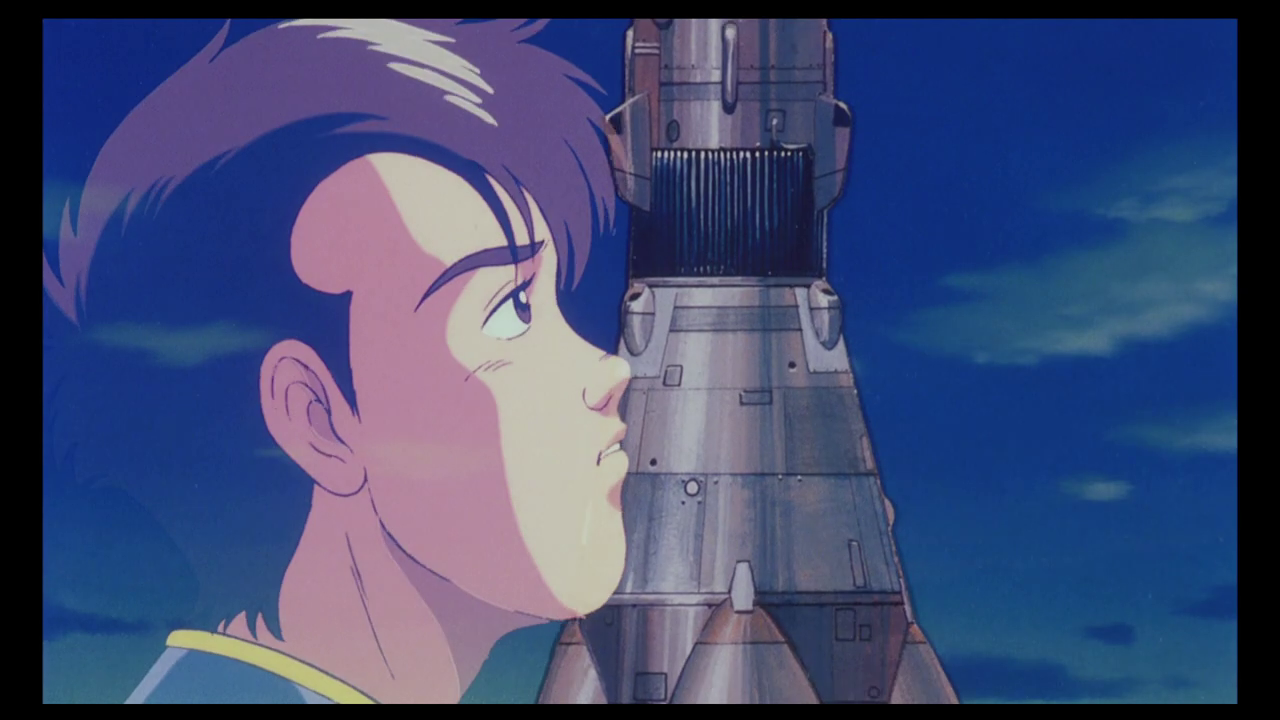 Doctors in the Space Force are pursuing “romance.”
He continues to make rockets and pursues the romance of going to space.

“Don’t raise it, it will fall according to the roundness of the earth.”

Everyone except them makes a fool of the existence of the “Space Force” itself.
Those who should have been ridiculed became serious with a really trivial kick,
I’m getting serious about realizing my dreams.
Although it is a little abrupt as a development,
The development of the story is easy to understand because of its simplicity. 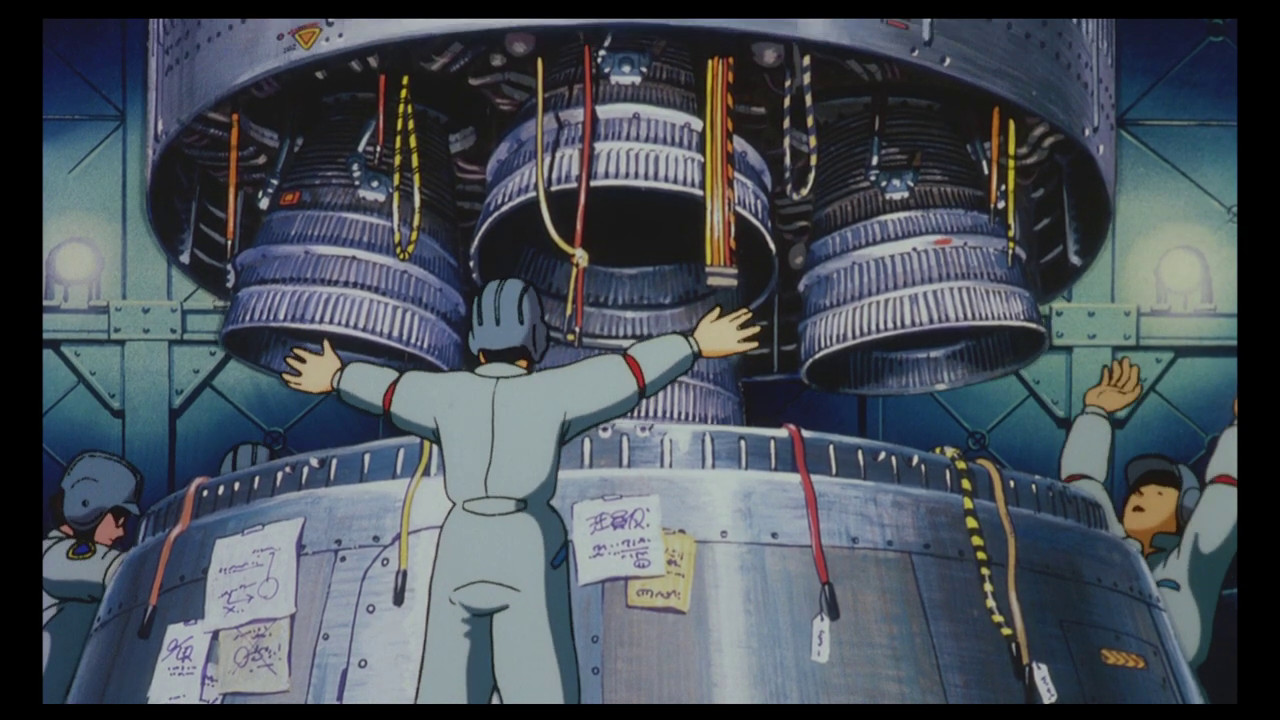 However, there is little big excitement in 2 hours
It is undeniable that the story has been drawn plainly.
The hero is motivated, trained,
His motivation is motivated and the surroundings become serious and the way to space can be seen.

An accident etc. occurred on the way and the doctor of the important character died,
The hero does something ridiculous to the heroine,
Suddenly ridiculous things can happen in a light development.
However, the excitement does not last for the ridiculous development.

Because it is a rocket that requires a “budget”
Various circumstances such as money problems, national circumstances, war problems, etc. are also drawn,
Such a situation is also shown to be sober.
The hero is discouraged by the death of the doctor, the budget and the troubles of the army.

Why does he want to go to space?
Even when asked, he cannot answer honestly and is worried.
Even if I make a mistake in such a situation, the woman who likes him will forgive me.
On the contrary, I apologize for myself.

It’s too convenient for a man (laughs)
Although there are some parts that cannot keep up with the changes in the main character,
The development at the end is hot and exciting. 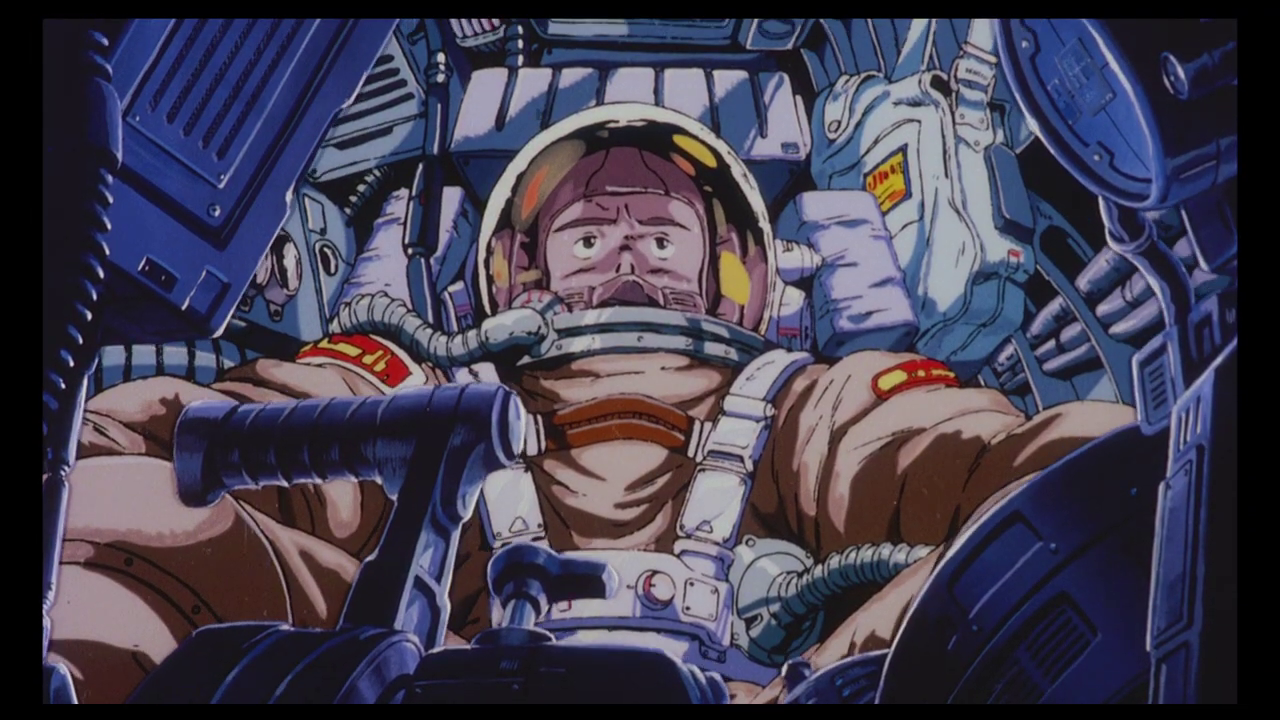 The drawing of this work is terrifyingly drawn.
In particular, the background and the depiction of the machine are drawn to the extent that you can feel a strong commitment.
The background written so far in the hand-painted cel animation era,
I am honestly surprised by the machines, clothes, and facial expressions of the characters.

Although it feels old because it is a work more than 30 years ago,
Still, the pressure of drawing drawn by hand is more than its age
You can feel it firmly from one scene to one scene.
Furthermore, the music is Ryuichi Sakamoto.

Especially, it is the final stage that I feel the goodness of the drawing of this work.
The war begins and they raise rockets in the midst of the war.
The protagonist provokes them while others other than the protagonist try to give up.
I don’t want to throw away what I’ve made so far, everyone is fine,
Even if I die, I will go up. I’m still doing it.

They also stand up to such a word of the hero.
As fighters fly and bullets fly, they are the Space Force.
Raise the “rocket”. War has nothing to do with them.
It just goes through the romance of a man.

General comment: Don’t fly, just drop according to the roundness of the earth 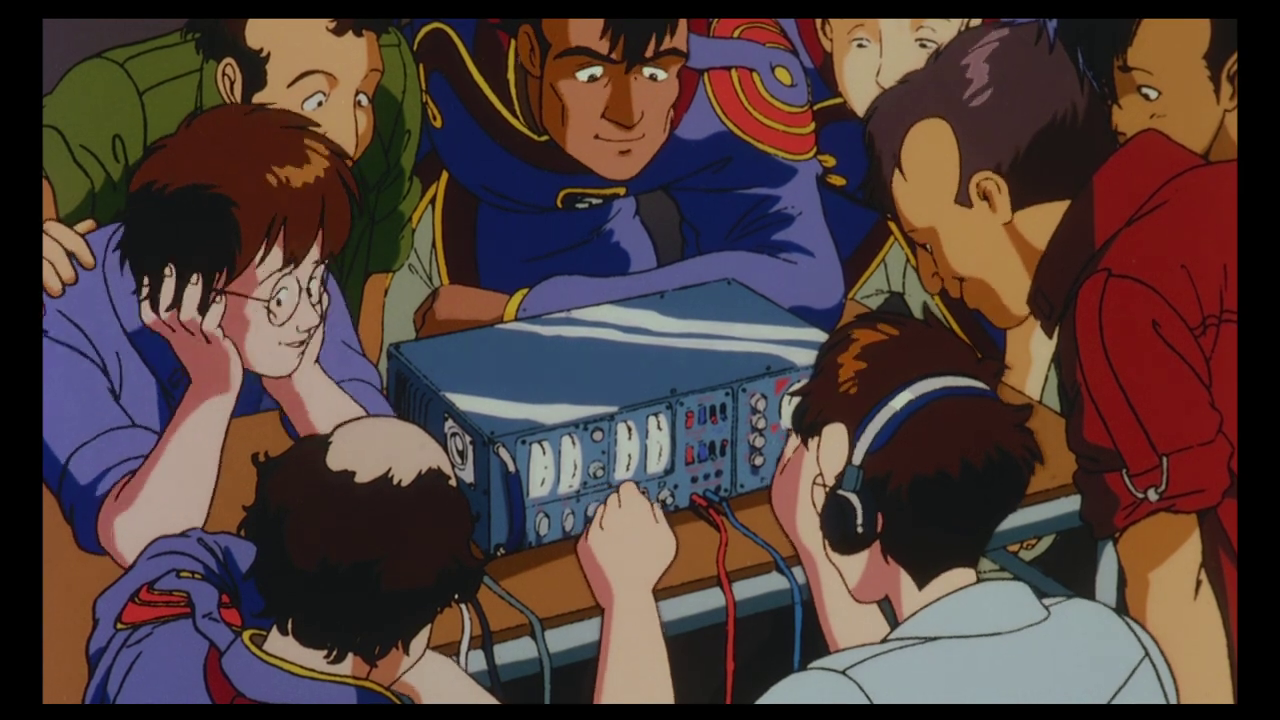 It is undeniable that it is a work that chooses people as a whole.
The side who sees the meaning of the story thinks in the simple story development,
Intoxicated by the level of drawing that is depicted in detail in the story,
In the “world view” and “romance” that the story, drawing, and sound weave
It’s a immersive work.

This work isn’t as interesting as people who like anime itself.
For some reason, I can’t take my eyes off the screen and I’m fascinated by it.
However, while it is attractive as a work, it has a story with no undulations.
It is undeniable that the excitement is thin except in the final stages.

What happened to the story after all?In a bad way
GAINAX-likeness has also come out,
It may be said that it is a GAINAX-like work in both good and bad ways.

This work seems to be a very expensive work,
“Aim for the top!” Was created to make up for the deficit.
“Nadia” is made and “Eva” is made.
In that sense, it may be the origin of GAINAX.

Because the movie version of Evangelion is popular now,
It may be interesting to take a look at this work to return to the origin.
Although it is a work that is difficult to recommend to people if it is honestly interesting,
It is a work that you can feel the “taste” in animation.