The third-generation Yamaha YZF-R15 changes drastically from the design as well as the engine block, applying VVA variable valve technology for third gear as well as the limited speed to new heights.

R15 V3.0 appeared at Yamaha firms in December last year, imported directly from Indonesia, a country that accounts for the majority of motorcycle export volume on the market of imported motorbikes to Vietnam today.

However, until the end of December 2017, the price of the new R15 V3 was officially priced at 92.9 million VND, which also made the private imported R15 V3 significantly lower the price when it just returned to the Vietnamese market. In the middle of the year, the agents blew the price up to nearly VND 110 million excluding the license plate. 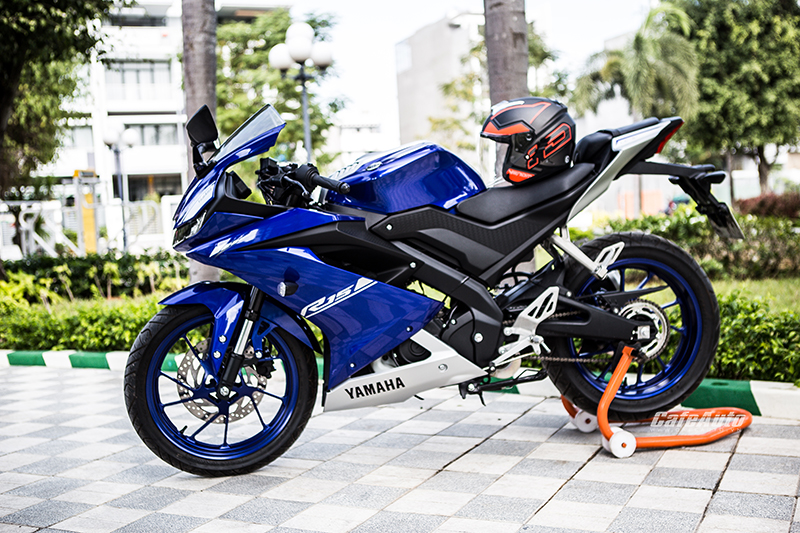 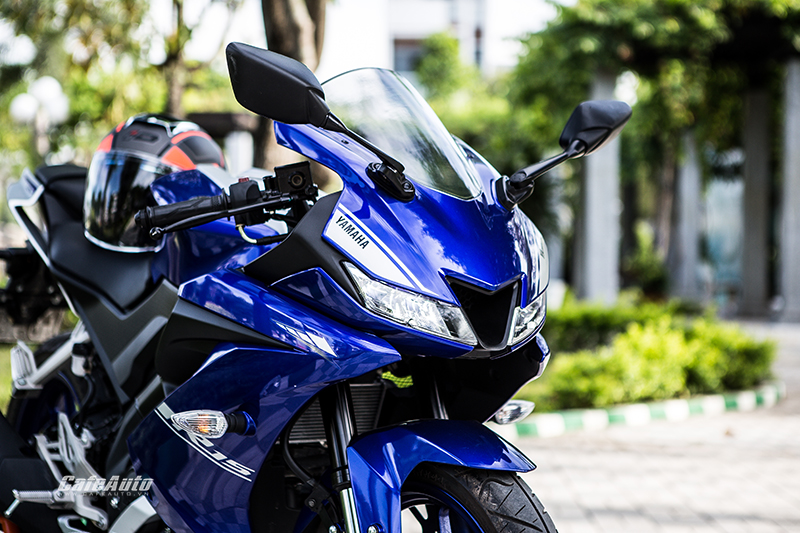 Yamaha YZF-R15 V3.0 came to Vietnam quite a lot when a series of R15 V3 models entered privately before, currently the price of private sale is a bit lower, but in terms of quality, like the warranty is hard to guarantee.

Sensing for the first time a surprise with Yamaha’s new design language, this third-generation YZF-R15 has completely transformed from the previous two versions. All the details on this R15 V3 as well as the inspiration are based on both the famous elder models YZF-R6 and YZF-R1 the new generation has just launched not long before. 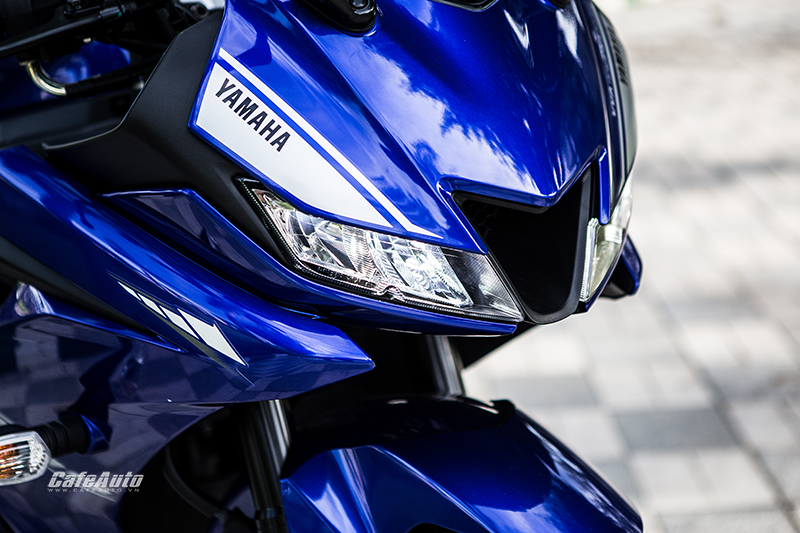 Overall, the R15 V3 attracts attention by its aggressive design, sporting Sportbike, compared to the second generation, the height of the saddle is also raised at 815 mm (equal to Nakedbike Kawasaki Z1000), making the driving position on This V3.0 model has Sport even more. 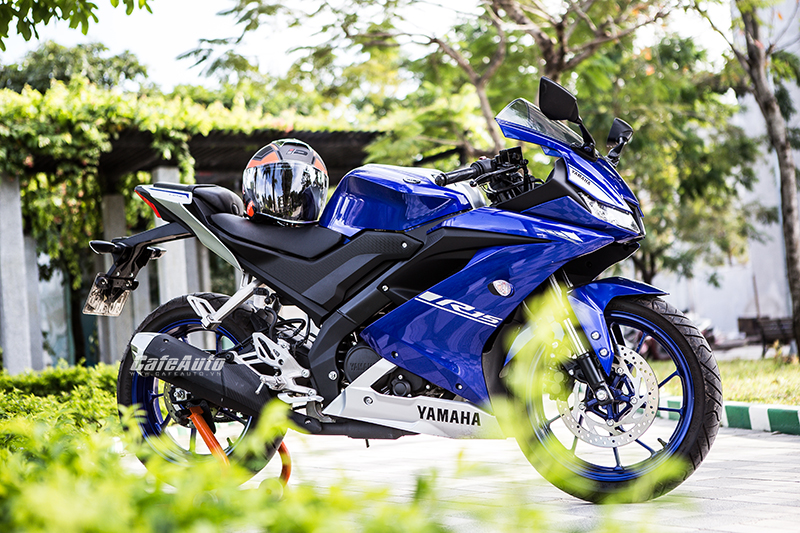 Overall, this third-generation Yamaha YZF-R15 has a lot of love for Sportbike-loving bikers, although it’s been quite a long time on the market, but with a new face, a new body, this bike fascinated me again by this new design language.

Located in the 150 cc Sportbike segment, the Yamaha YZF-R15 V3.0 changes dramatically when compared to the second generation when the design is slim, fragile, the 150 cc engine block does not have too many special features. However, after stepping into a new era, Yamaha competed fairly with rivals when equipped with superior technology as well as more “toys” to surpass other competitors. 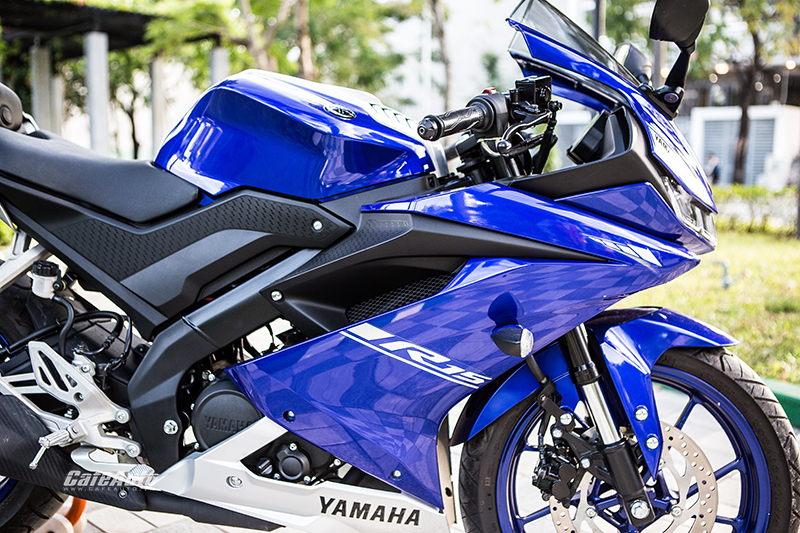 Compared to the second generation, Yamaha has completely changed from body and soul, the new design language based on the elder YZF-R6 is the first inspiration on this 2017 R15.

Specifically, the Yamaha YZF-R15 V3.0 has a large overall size that is almost similar to both the R1 or R6 seniors. On the surface, the R15 is no different from a 1000 cc sports superbike, very easily mistaken for big tires and large headlights. However, few people can guess the R15’s engine block of only 155cc, if not a connoisseur of biker, it is difficult to recognize. 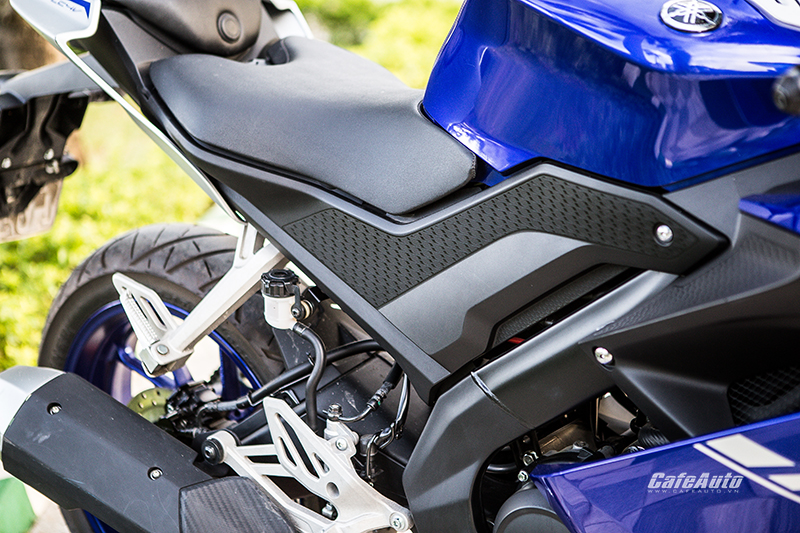 Yamaha YZF-R15 in this 3rd generation can be said to be far ahead of competitors in terms of equipment and technology, typically Suzuki GSX-R150 is produced and assembled domestically and 150 cc engine block Accordingly, R15 V3.0 is directly imported from Indonesia with a capacity of 155 cc, 19 horsepower and VVA variable valve technology that changes over time. 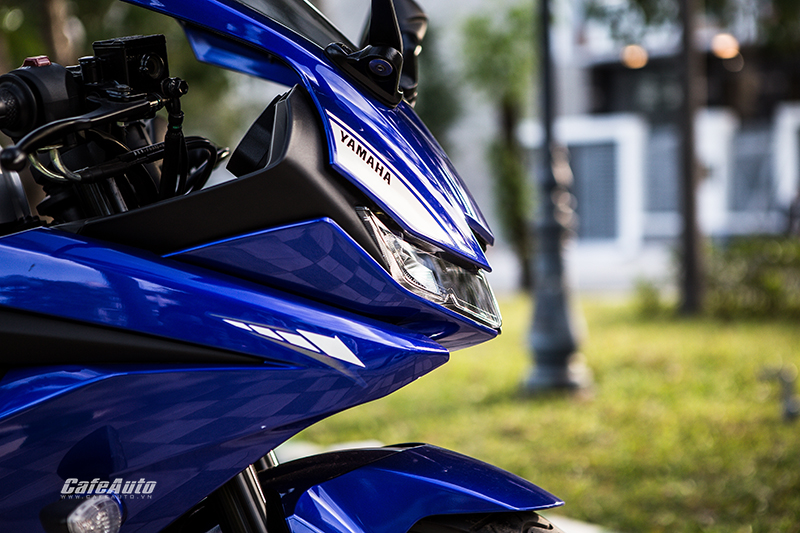 In addition, the wet clutch incorporates Slipper Clutch technology that enables smoother gearshifts at high speeds when focusing on low gear, similar to racing supercars. And is the first time this technology is applied on Sportbike 150 models.

The most striking change is the separate headlight unit, using LED light for extremely accurate and clear brightness, in addition, the cos lamp is always lit whenever the key is turned on. display of imported cars.

The new design language on the headlight cluster reminds to the image of the Honda CBR600RR Sportbike model that has the same design. 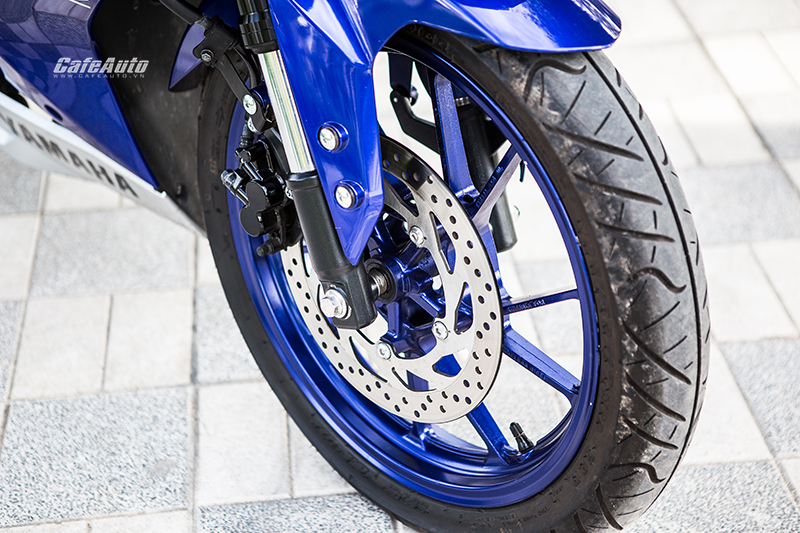 And yet, the front forks of the R15 Upside Down travel in reverse diameter of 43 mm, with sturdy black journey of 120 mm, allows the feeling of shock and grip from the road in the most authentic way. This equipment is also considered to be worth the money, more than the same segment cars such as Honda CBR150R or Suzuki GSX-R150. 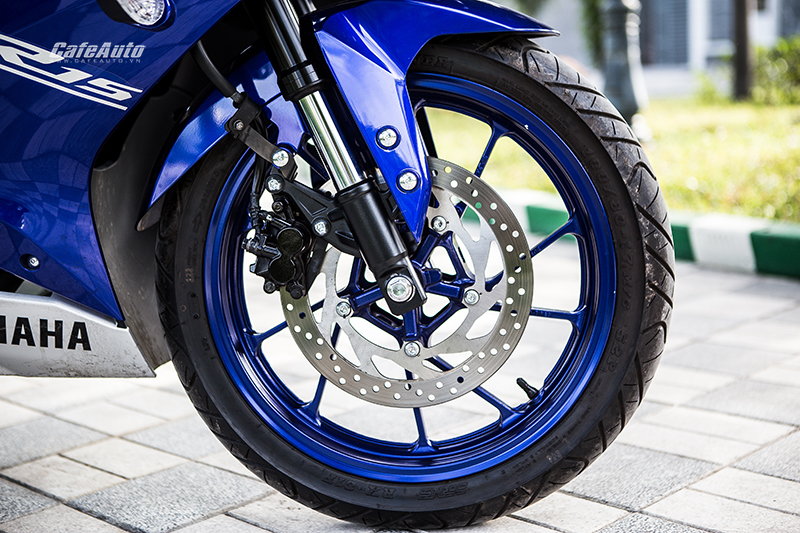 Underneath is the all-new set of double herringbone designs with 7 spokes and painted in GP blue, in the V2.0 R15 version using 5 double wing wheels similar to the current Exciter 150. Accordingly, the new set of tires size 100 / 80-17 for the front wheel and 140 / 70-17 for the rear wheel with large tubular lines are limited to small objects such as crushed stone. 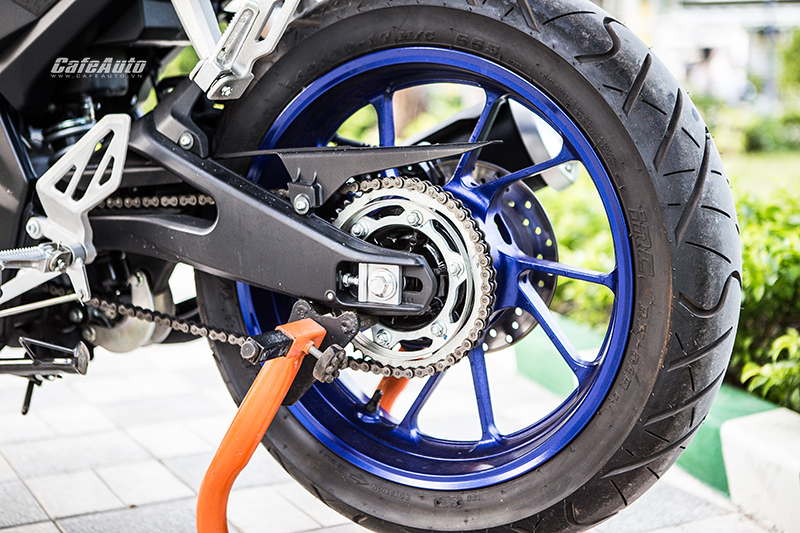 The braking force of this vehicle comes from a single 282 mm disc assembly on the front wheel and a 2-piston Nissin brake fluid shackles, followed by a single piston oil rear with a 220 mm single. R15 V3.0 has not been equipped with ABS brakes, however, currently there are some R15 on the Vietnamese market adding this feature at a cost of just over 10 million.

The first driving feeling when sitting on the R15 V3 is the pleasure of tame Sportbike models, with the posture of leaning forward, the abdomen hugging the fuel tank, two pillows clamping into the body, legs slightly brought back The rear creates extremely excited feeling, and with a height of 815 mm on the R15 V.30 makes the driving position of Sportbike true. 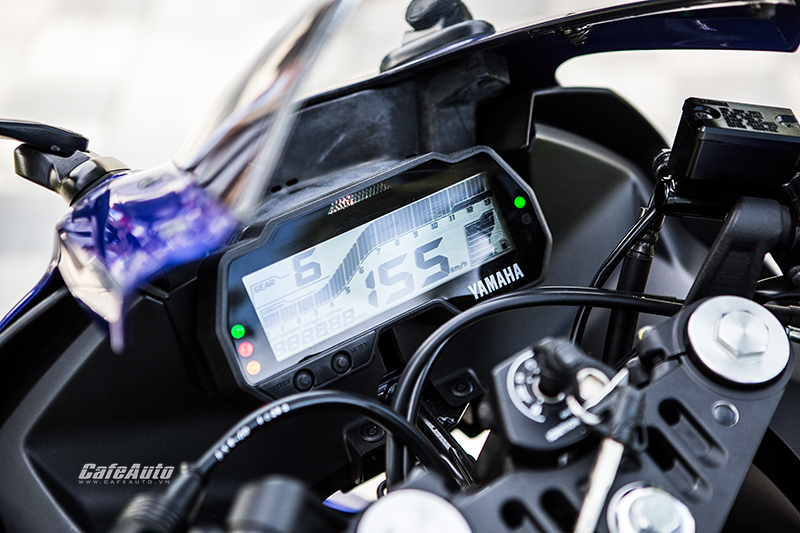 With such a seat height, the R15 V3.o will suit people taller than 1m7, while if the height is more modest, the driver will be a bit harder to control the car. 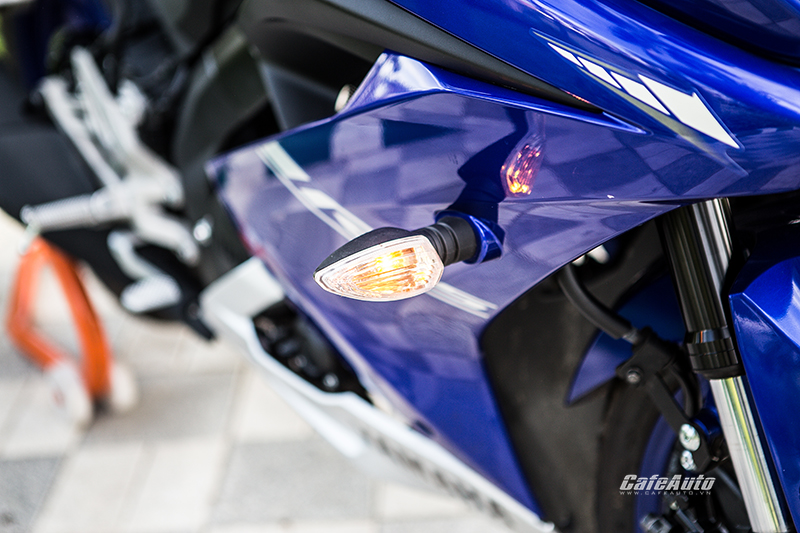 Turn on the key, the next-generation instrument cluster lights up to feel the modernity as well as make the driver more excited, the words as well as the bar showing the number of revolutions and the words “say Hi” appear. A buzzing sound from the Fi petrol injection system starts up. 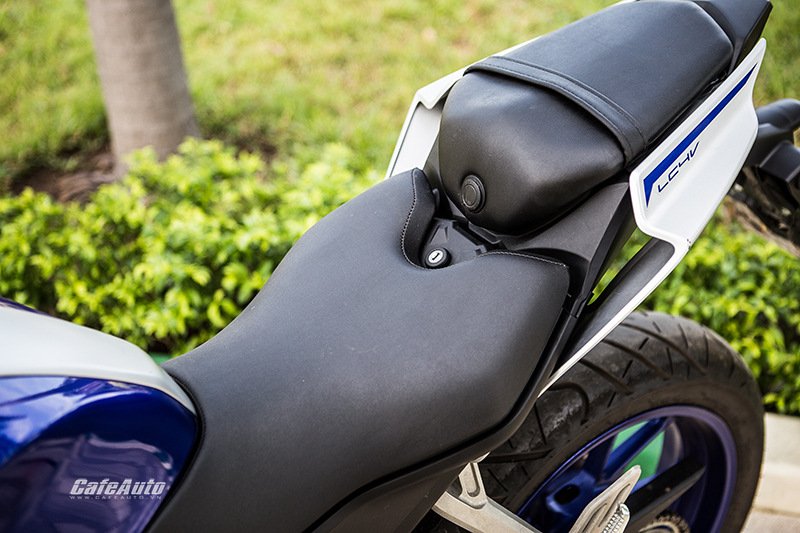 Press the starter button, the car gives a warm bang, the machine works smoothly with guaranty band of 1,500 rpm, the sitting position is clamped down to the fuel tank, leaned slightly forward and ready to start. 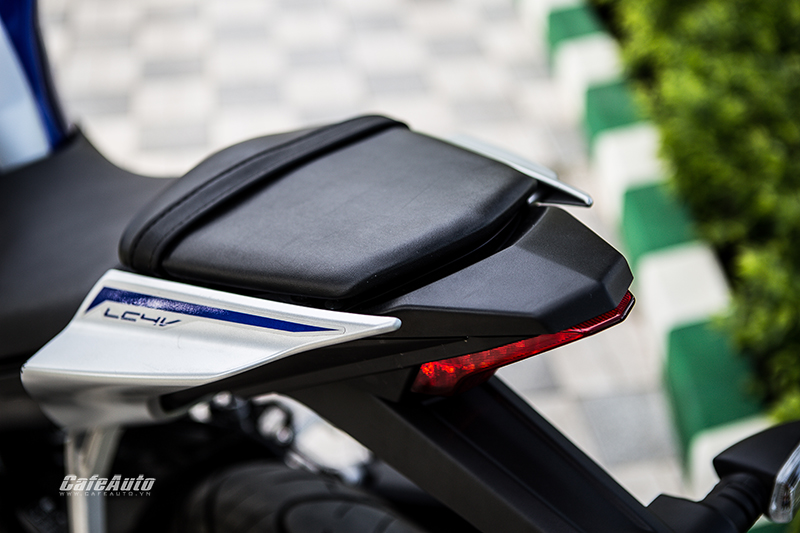 The interesting thing about this car is the extremely light clutch clutch, in the number 01 and start pulling the throttle, the throttle feeling on the R15 V3.0 is very responsive, the car enters the gearshift quickly to create a feeling excited feeling. 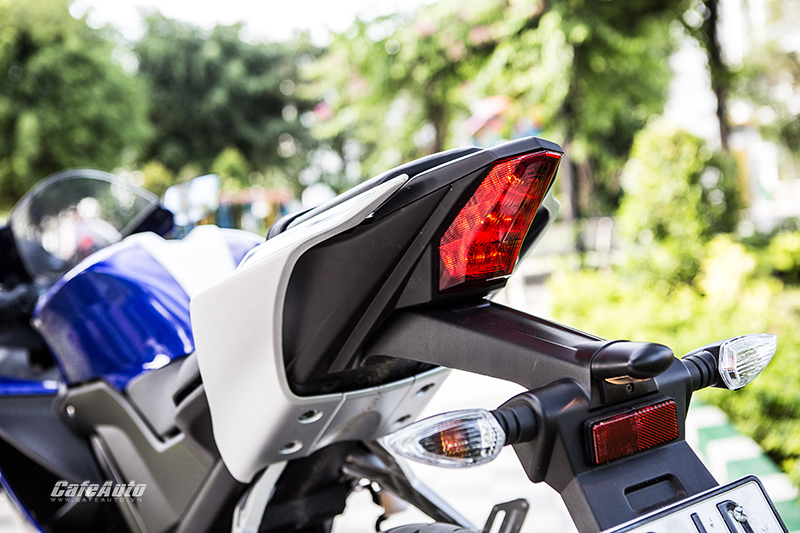 However, when using a Sportbike sports car in the city, it is impossible to fully feel the true power of R15, but instead feel the level of acceleration in each gear step as well as the ability braking when the car goes into gear and the advantages of the Slipper Clutch anti-slip pot. 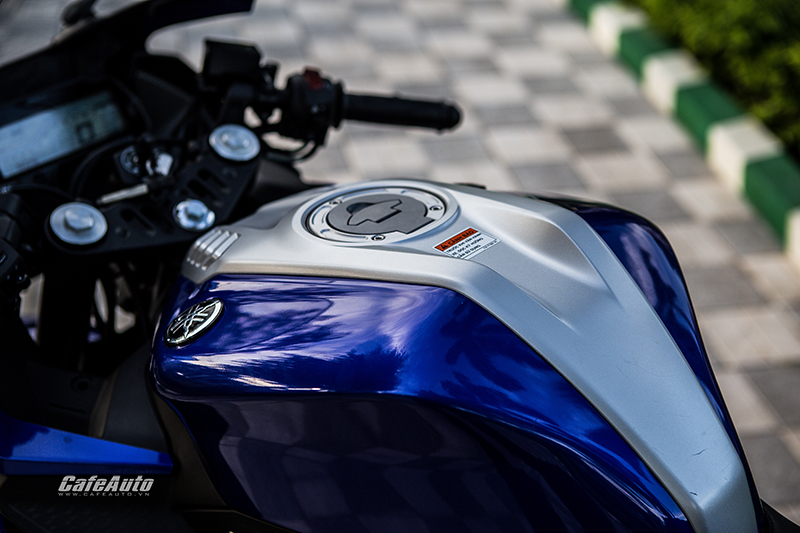 With this new anti-slip clutch system, continuous clutching in the city is no longer too difficult, because the system has caused the clutch to cut very light, followed by a long-sleeve clutch clutch, More scientific feels clutching pleasure and more leisurely. 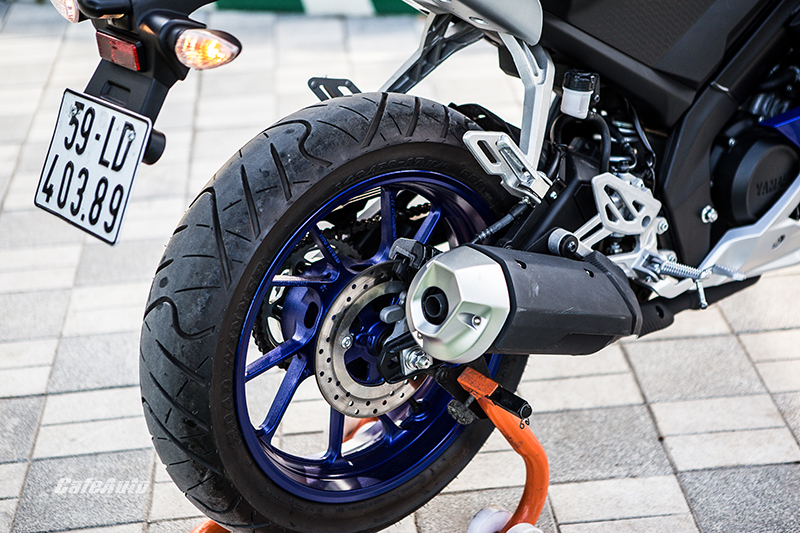 In addition, thanks to the VVA system that allows when the car reaches a high engine rpm, more than 7,400 rpm, the system will automatically work allowing the valve to automatically adjust the variable valve opening. more to meet the best power and torque in the terminal countries. 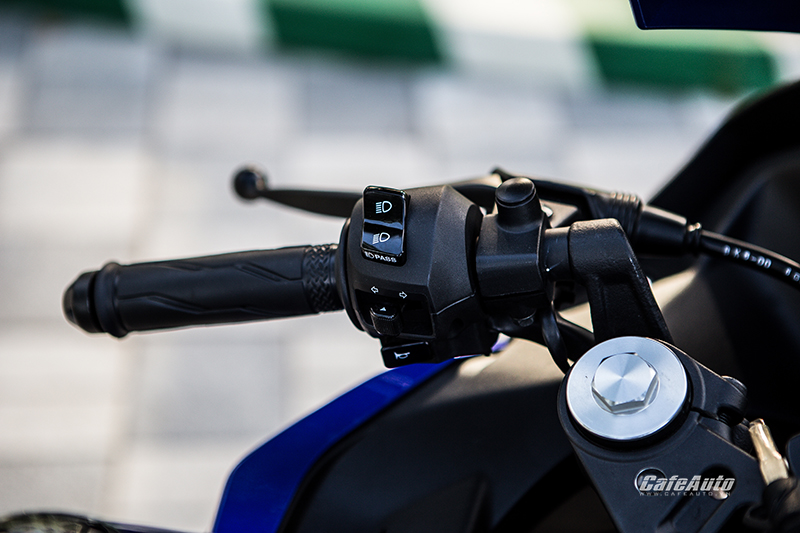 Separated from the crowded city, the new R15 really let me feel its power, the long distance to know horse or fruit is not wrong. R15 has proven its power and performance on all roads, especially on sharp bends. 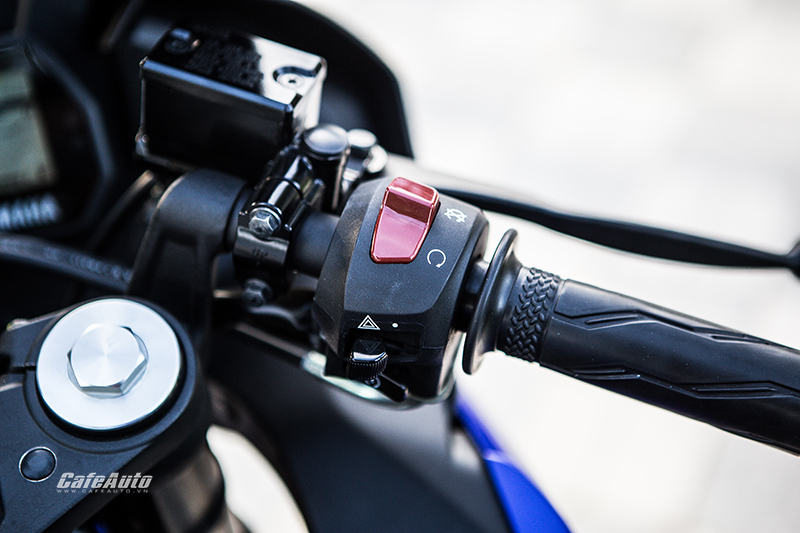 The R15 is not only fun to drive and also a powerful, powerful fighting machine with a shifting gearshift more flexibility than all other competitors in the segment.

R15 V3.0 has shown quite well when I constantly hit the accelerator, or even the sharp curve, just a throttle into the gear but has reached a speed of over 100 km / h when only at level No. 3 and reaches a maximum speed of 146 km / h. 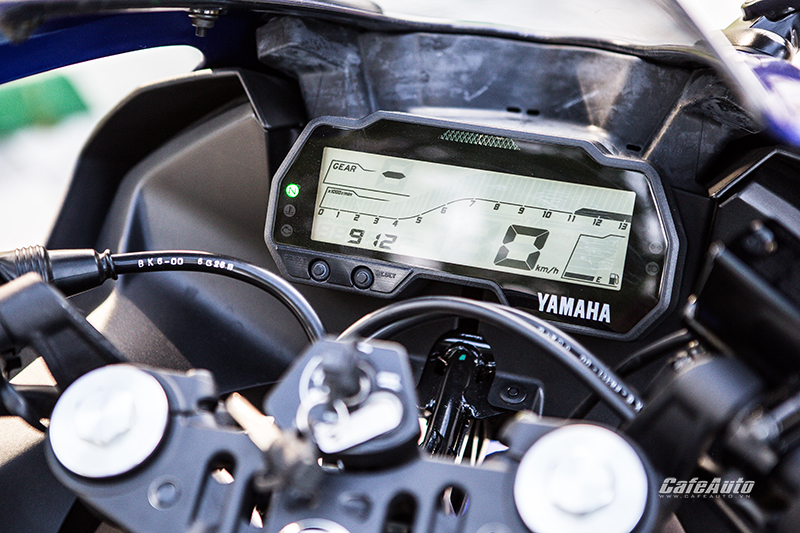 In addition, this clutch also helps support braking ability more effectively, when the case of emergency braking at high speed, the driver can combine with the foot brake to operate the hand brake by squeezing the gear shift slowly. primary. This way the driver can easily reduce the speed suddenly to avoid the phenomenon of wagging the tail of the fish. 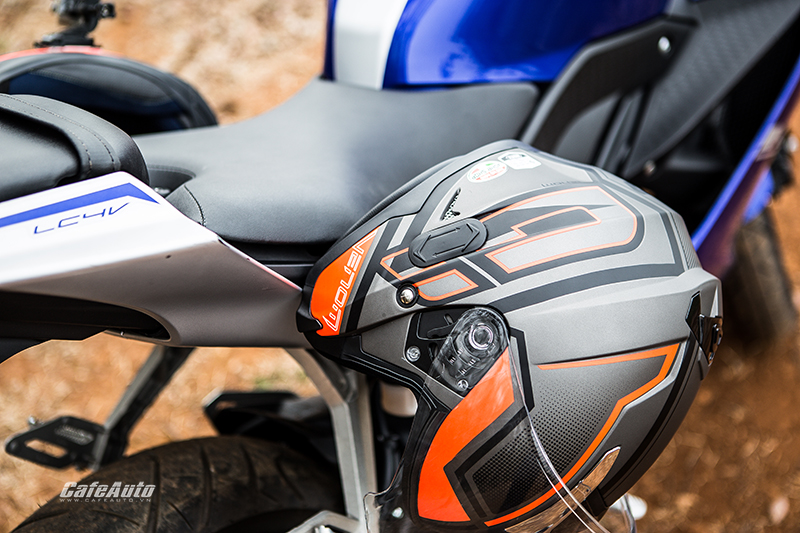 In addition, this R15 V3.0 applies the popular Deltabox frame technology on the R-series to allow the car’s center of gravity balance, reasonable leg position to increase handling flexibility as well as help. The driver easily enters and exits the corner without any difficulty in adjusting posture. 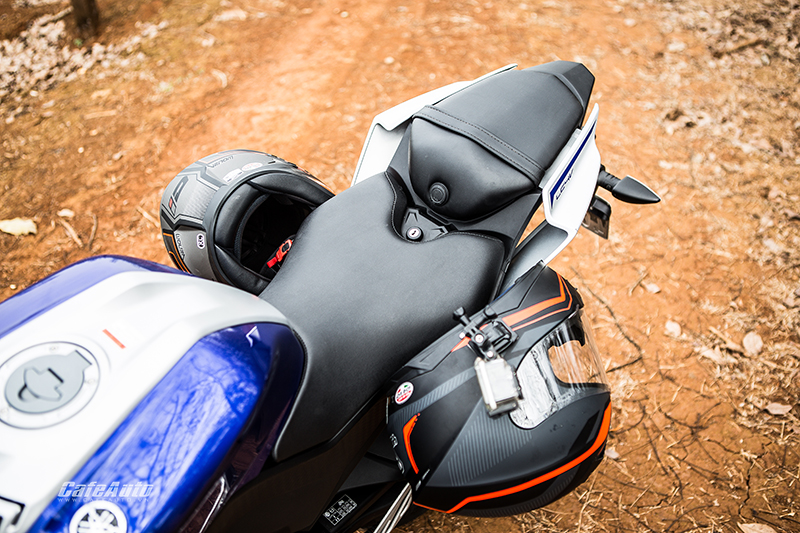 Finally, the rather big barrier to owning Yamaha YZF-R15 V3.0 is the price when the proposed price is VND 92.9 million, the competition is quite large when the competitors have lower prices when apply direct assembly methods in Vietnam, or some imported car shops to reduce prices to compete. 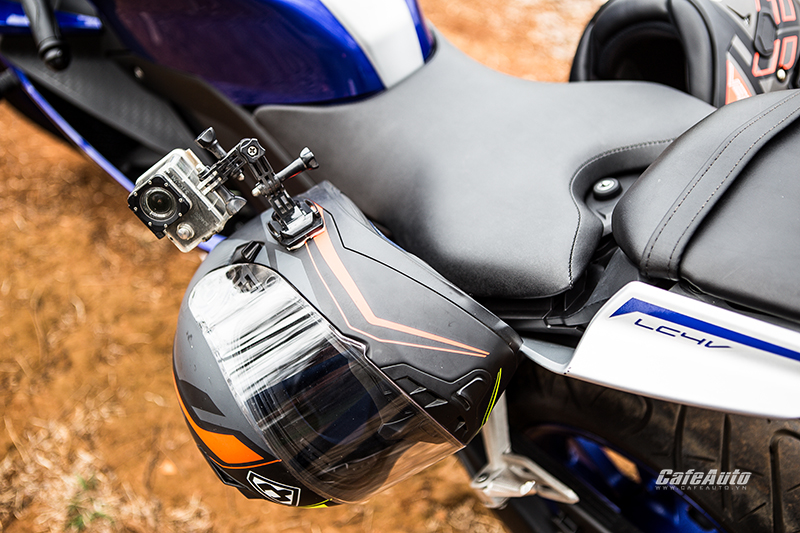