This is an upgrade with more quality screens, bigger RAM and more flexible camera adjustment than the old version of Webvision N93 Plus released last year.

The Webvision N93X journey camera now has a genuine selling price of VND6.49 million, VND1 million higher than the price of the old N93 Plus version. The product is now officially distributed in Vietnam by Dang Cap Camera with a 2-year warranty and renewed in the first year.

The box of Webvision N93X this year is newly designed. The image of the product is printed to help users easily visualize the product inside. 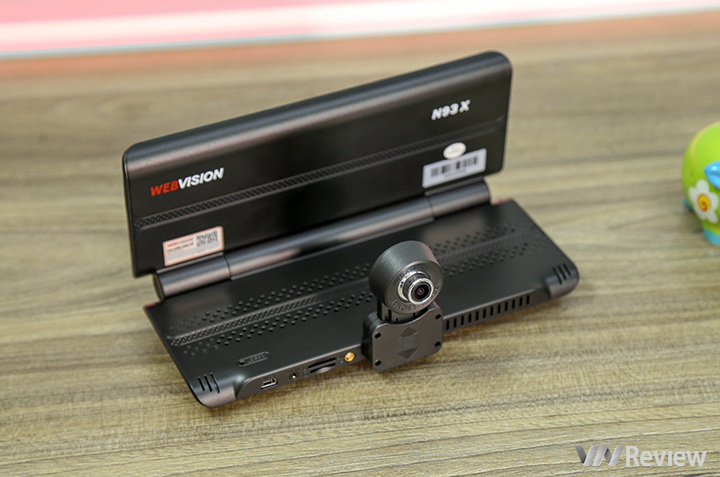 In terms of design, Webvision N93X still retains the same style as the old N93 Plus but there are differences in color. The product is designed with a strong black tone. The shell is inserted for a firm feel. 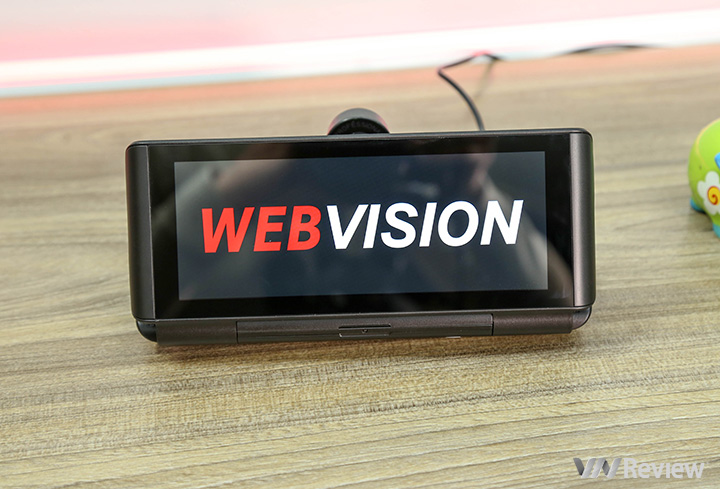 The screen size of N93X remains the same as the old version of 6.86 inches but uses quality IPS LCD panels over the regular N93 Plus TFT LCD panels last year. 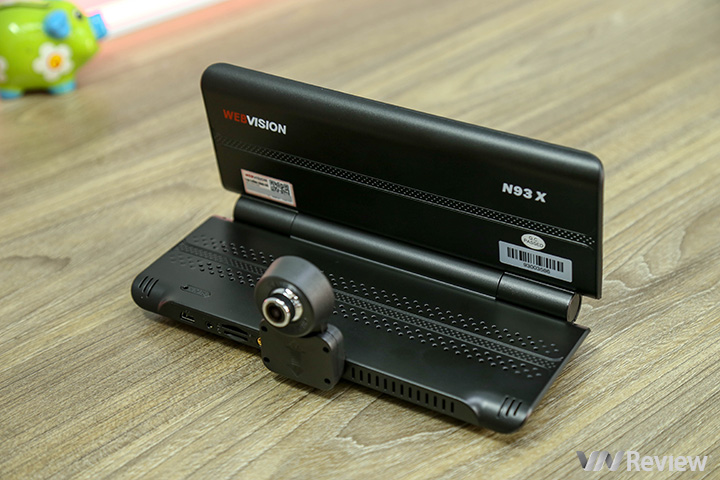 Webvision N93X's back side has no design changes compared to last year's N93 Plus. The back face has many openings, which helps the device to dissipate heat during long-term operation. 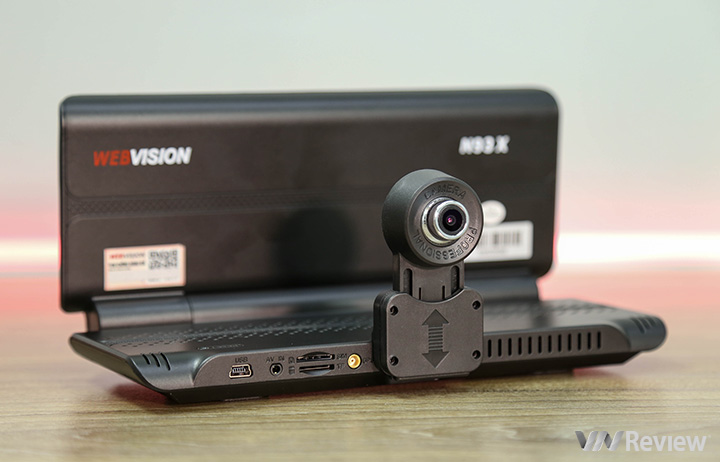 The camera part is attached to the base of the base. This camera cluster can be raised or lowered to avoid the driver's vision. In addition, this camera's eye can also flexibly customize viewing angles. 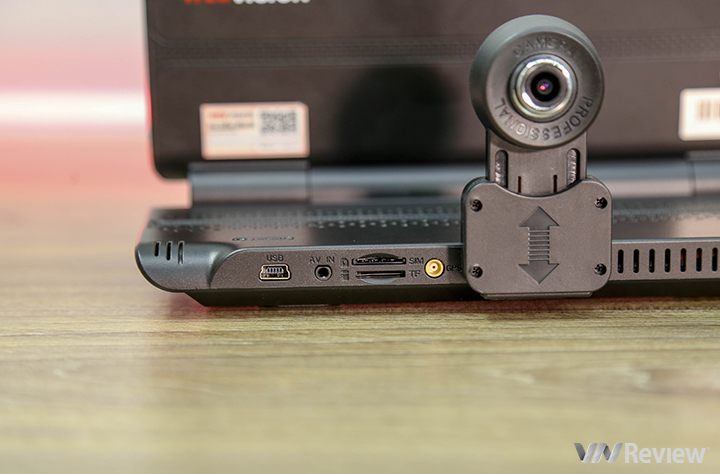 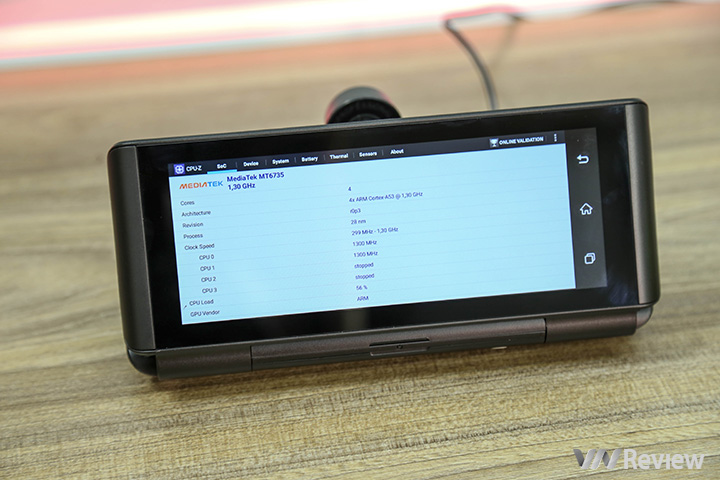 Webvision N93X configuration is upgraded RAM memory capacity to 2GB, helping to improve performance during operation. In addition to recording the journey, you can use N93X as a tablet in basic functions such as surfing the web or watching videos on YouTube stably. 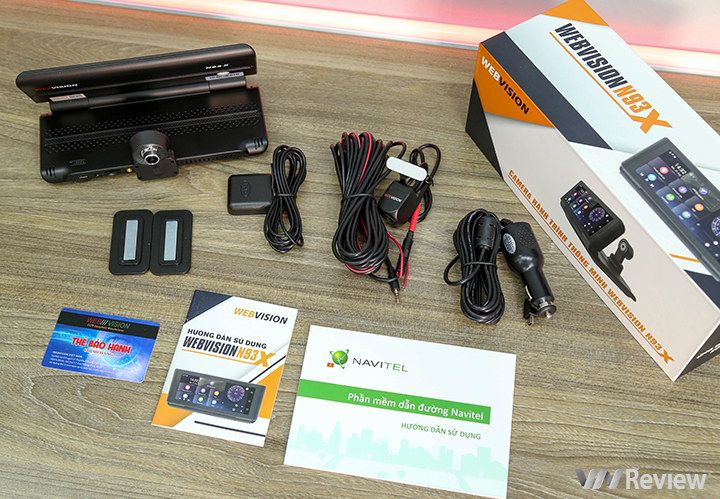 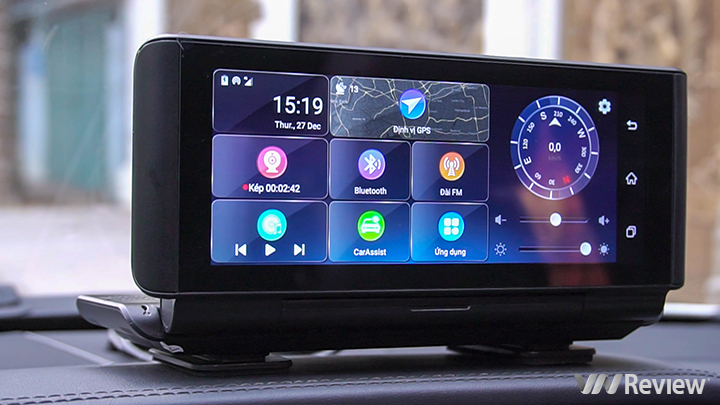 Webvision N93X's screen interface has had some changes compared to last year's Webvision N93 Plus product, the app icon looks neat and easier to identify. The main interface of the device will display the compass, GPS navigation with a map of directions, the speed of movement of the vehicle along with applications such as viewing images directly from the camera being recorded, music applications, listening to radio FM and Bluetooth connectivity. Users can also install their favorite applications through the Google Play app store like a normal Android device. 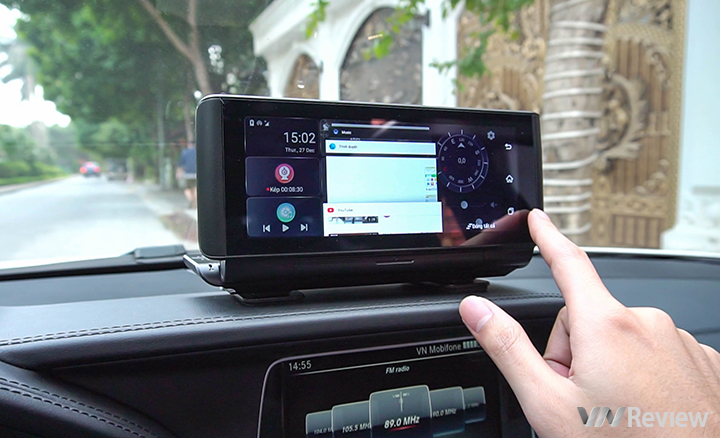 This year N93X adds Android's familiar multitasking button to let users turn off applications that don't want to run in the background. 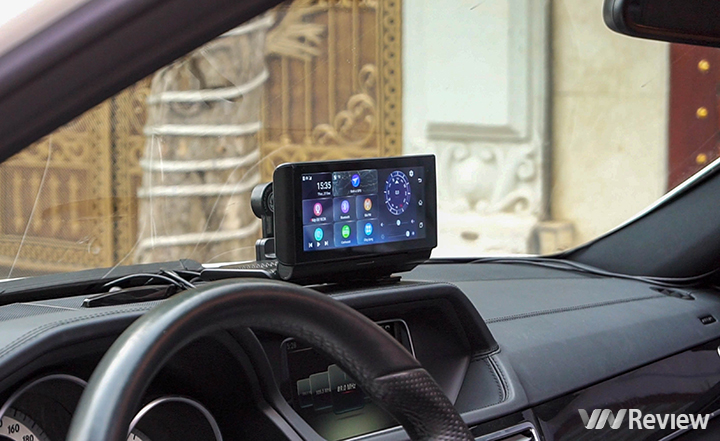 In actual use, N93X's IPS LCD panel has a better display quality than other products in the same segment. Most current cruise cameras have medium quality screens, just enough for driving needs. The N93X provides sharp images and bright colors, wide viewing angles and no shadow. 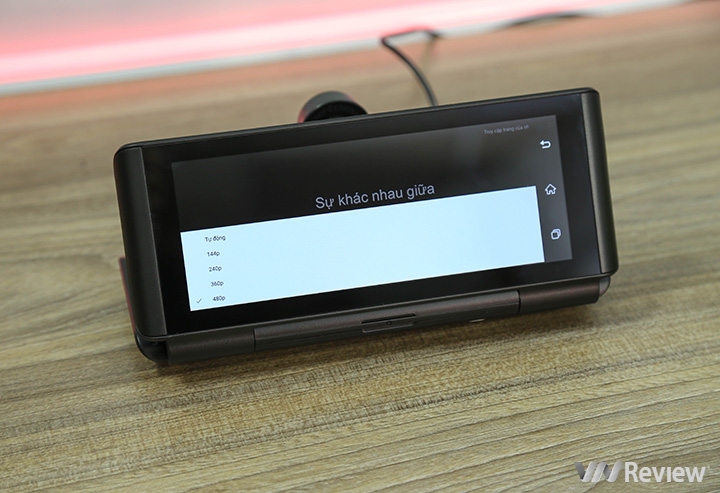 The device's screen only supports viewing at 480p resolution 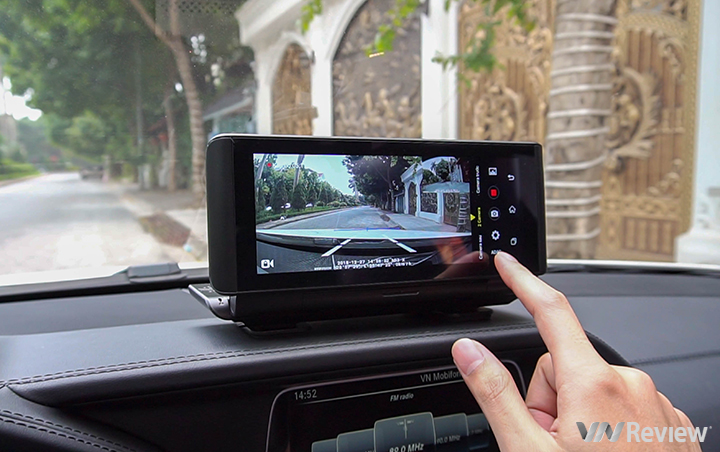 The front camera has a wide viewing angle of 140 degrees, wider than the widest angle camera (123 degrees) on today's phones.

Camera interface is similar to the old version. Users can choose to view the front or rear camera, or can simultaneously view both cameras. The rear camera will automatically display when the user puts the shift lever on R or reverse gear. The N93X's front camera has a fisheye lens design that creates a wide viewing angle of 140 degrees, much wider than the wide-angle (80-123 degree) camera on today's smartphones. 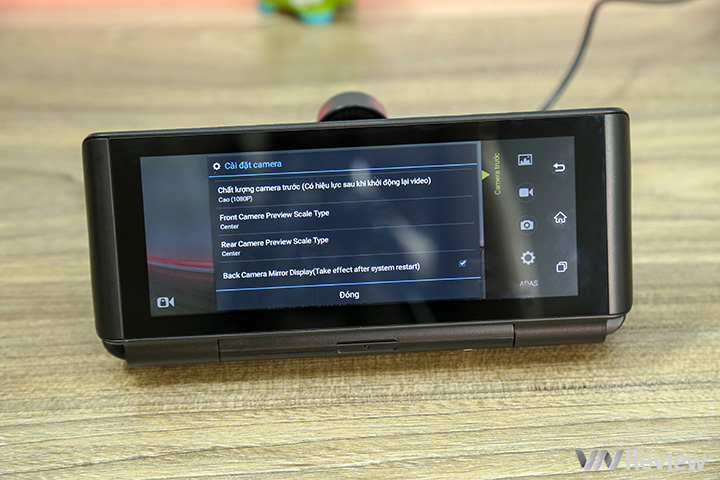 Inside the camera interface, there are still some places that have not been completely Vietnameseized. This can be a bit difficult for users who do not know English. Hopefully, the manufacturer will have an update to fix these small errors.

N93X is a normal Android device so it can run multitasking, when exiting the camera still works normally. In addition, the device can run Google Play application like any other Android device. 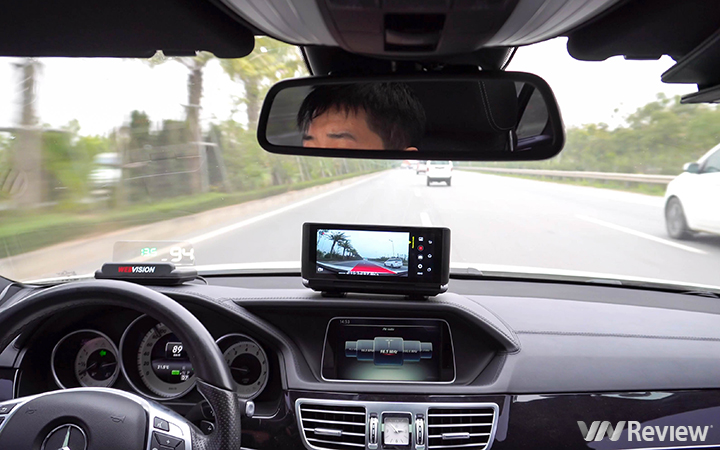 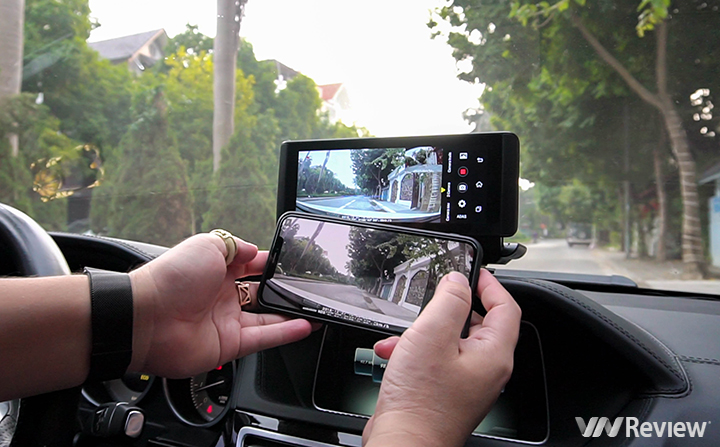 As with the old version, you can scan barcodes to connect your phone to the N93X via an application called CarAssist. After installing the application and connecting (phone and cruise camera) with the same network, the phone will automatically recognize N93X. From the application installed on the phone, users anywhere can see and know which car is operating in which area, which route is on, or can see the operation in front / back. The vehicle is recorded via N93X.

The product's case comes with a 16GB memory card. This card can record the journey for about 2 hours continuously. After the memory is full, the camera will overwrite previously saved files. In the event of a sudden collision, the video will be locked by the camera immediately in that moment, without overwriting these files. However, the actual experience is sometimes the device still "wrong" when the car enters the strong track.

Video recorded safety warning: encroaching lane, the distance of the vehicle ahead.

In addition to the travel recording function, the N93X also has the ability to warn lanes, speed limit warnings and warnings of railroad crossings. These functions are supported by voice in Vietnamese, so it is convenient for anyone to use. 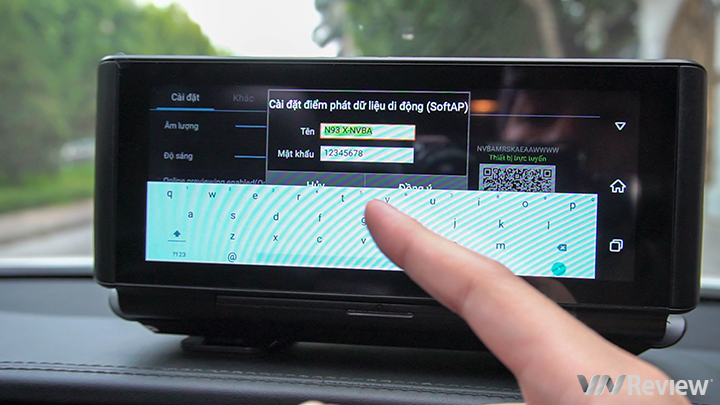 If you have a SIM card installed, you can use the device to play Wi-Fi for everyone on the car

As an Android device, the N93X can be used to listen to music, watch videos, hands-free conversations (Bluetooth) or connect to a car system. If you install an additional 3G / 4G SIM card, you can play Wi-Fi for people who use the car and can also stream live photos to Facebook or other social networks.

Webvision N93X is equipped with MediaTek 6735 quad-core processor with 1.5Ghz speed and 2G RAM, enough to meet basic tasks. The videos are recorded smoothly, without jerking lag, the sound is not lost. In addition to recording, users can use it as an Android device to watch movies, listen to music, surf the web or play light games. 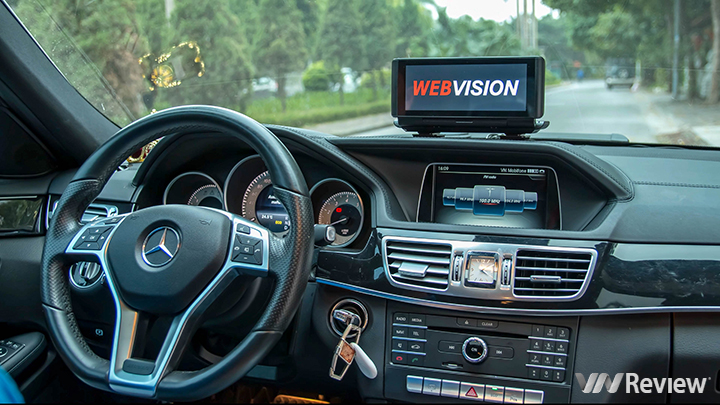 This year's Webvision N93X version has a remarkable improvement, especially the screen quality, performance and camera flexibility. This is a well-recorded, high-quality journey camera and has all the added features for the journey such as lane-crossing warnings, speeding and Vietnamese voice warning.

Good background quality is also useful in case people want to use N93X to surf the web and watch movies. In addition, the device is also capable of being used as a normal touch screen Android device and can play Wi-Fi for other devices from 3G / 4G SIM installed in the device.

It can be said that improvements in N93X deserve a price increase of 1 million VND compared to the old version. However, this product also has a noticeable limitation that the old MediaTek 6735 processor chip is not strong enough to display high resolution on the device's screen and camera lock function in case of double collision when being mistaken when the car enters a strong track.