The tablet market is fiercely competitive in the low-price segment and small sizes of 7-8 inches. Last year, Google / Asus and Amazon defined what we could get for a tablet costing US $ 200 (over VND 4 million).

Amazon is the pioneer to market the $ 199 Kindle Fire tablet with quite powerful hardware, then a few months Google / Asus also launched the Nexus 7 with a more attractive hardware configuration, even Releases are equivalent to high-end tablets at the time.

This year, Google / Asus is under great pressure to have an upgraded product for the Nexus 7. The combination of the screen is sharper, the processor is more powerful, bigger RAM and has a 5MP rear camera added. making the price of the new Nexus 7 (Nexus 7 2013) more expensive, starting at $ 229.

In addition to working with Google to produce Nexus 7 tablets, this year Asus also introduced a number of 7-inch tablets in the low-end segment, including the Asus Memo Pad (currently priced at VND 3 million), Asus Fonepad has a function to call (5.9 million) and most recently the Asus Memo Pad HD7.

According to the name, the Asus Memo Pad HD7 is an upgrade of the Asus Memo Pad, but in fact it has many similarities with the older Nexus 7, the product that Asus cooperates with Google. These two tablets use a 7-inch screen with the same resolution and equivalent hardware configuration.

The biggest difference of the Asus Memo Pad HD7 compared to the Nexus 7 2012 is that there is a 5MP rear camera and especially a cheaper price, 4 million VND with a 16GB Wi-Fi version (the older Nexus 7 is available now). Genuine is 5.8 million with 32GB Wi-Fi version, while the current 16GB Wi-Fi is mainly portable with about 4.5 million VND). Therefore, this review of the Asus Memo Pad HD7 will have a lot of details compared to the older Nexus 7. 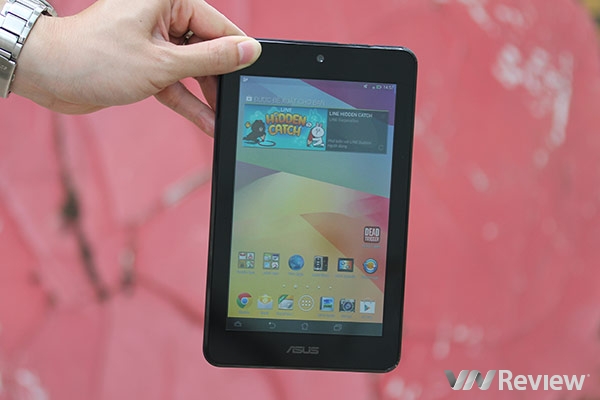 The Memo Pad HD7's back cover looks cheaper than Nexus 7's rubber plastic case, but the cover is close to the body so it feels pretty solid when held. Unlike the older Nexus 7, the Memo Pad HD7's headphone jack and microUSB port are put on top. The power and volume buttons located on the back end of the right side should be a bit hard to press when using one hand, this restriction also appears on the Asus Memo Pad and the older Nexus 7. 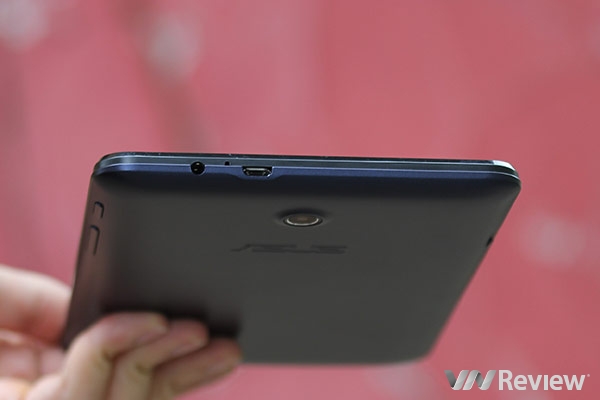 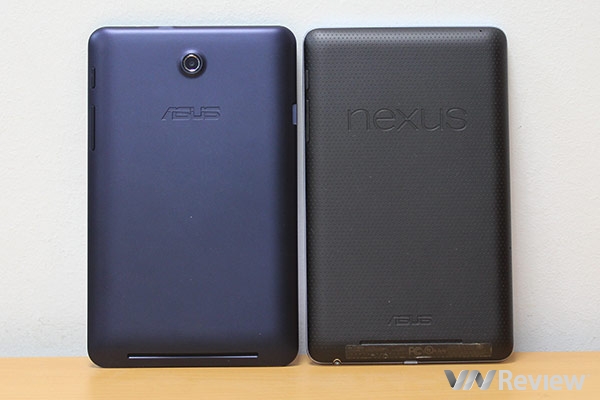 The Asus Memo Pad HD7 has a 7-inch IPS LCD screen with a resolution of 1280 x 800 pixels and a pixel density of 216 PPI equivalent to the 2012 Nexus 7. This is a tablet with a good resolution screen compared to the 4 million price range. The copper of the device looks much sharper and brighter than the Memo Pad (170 PPI pixel density) we reviewed recently.

When compared to the Nexus 7 2012, the Memo Pad HD7's screen brightness is significantly lower and the white background on the web page appears to be yellow and not white like the Nexus 7. In the outdoor, the Memo Pad's screen HD7 is also a bit more shadowy. However, this difference is also reasonable because the older Nexus 7 is still 20-30% more expensive than the Memo Pad HD7, while some hardware components have been upgraded such as adding cameras. 5MP behind. 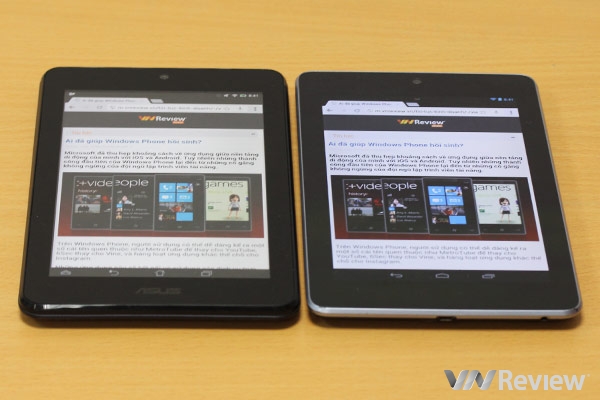 Asus has included the Memo Pad HD7 Asus Splendid software that allows to adjust color temperature (cold or warm), color and color saturation. When adjusting the color and saturation, the screen of the device looks a bit brighter. But there are two small notes The screen aspect of this tablet is that there is no light sensor to adjust brightness automatically according to ambient light and the glass surface is quite easy to attach fingerprints.

Shooting speed is also quite fast, just touch less than half a second when the picture is taken. The screen shot on the screen of the device looks very nice, but it looks worse on the computer screen but still at a decent level. The colors of the photos look warm, natural and free from color, although the detail is not very high.

As for filming, this tablet can record Full-HD movies similar to the new Nexus 7 and can customize video quality (Full-HD, 720p, 480p), compensate for exposure and use the same effects. like photography feature. When shooting at the highest resolution, the video quality is really not commensurate with Full-HD resolution because the detail is not high and the moving image is slightly jerky but considering its price range, this is still the point Great plus.

Here are some photos and videos shot from Asus Memo Pad HD7 (click on the image to view it at a larger size): 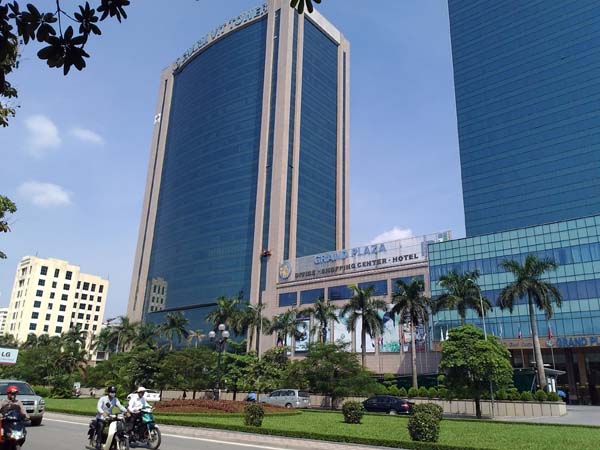 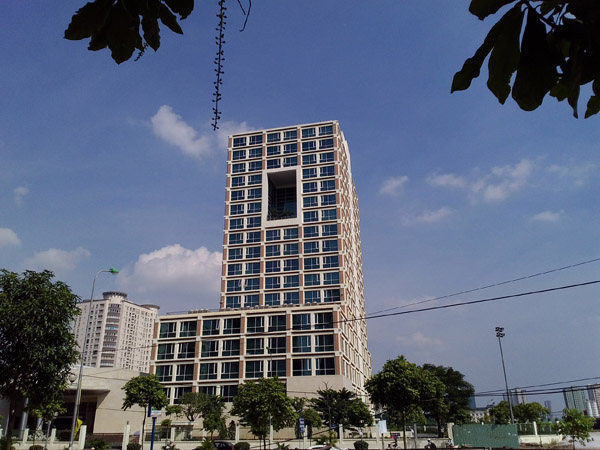 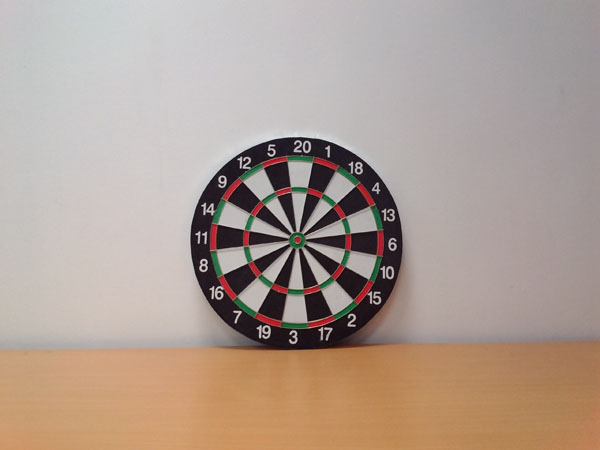 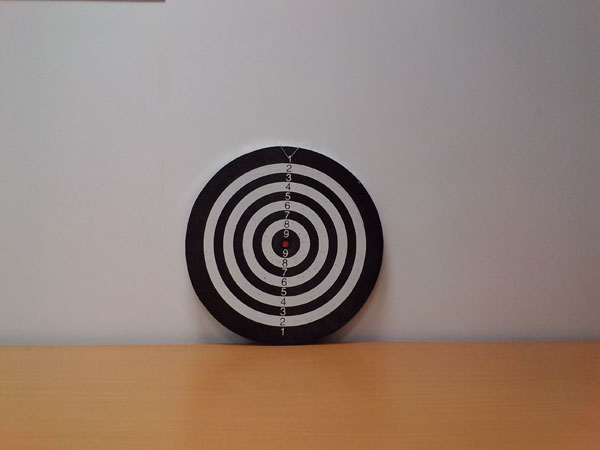 Asus Memo Pad HD7 pre-installed Android version 4.2.1 and added by the manufacturer some customizations. Specifically, Asus introduced a new notification bar with many quick customization of basic settings and a separate virtual keyboard with extra number, a nice blue keyboard background and support for word guessing.

In addition, the manufacturer also integrates with a number of separate applications including SuperNote Lite application, File Manager file management, ASUS Studio and Asus Story photo album application, Asus Artist postcard application and applications. App Locker allows you to set passwords for applications you don't want for others, such as children to access. 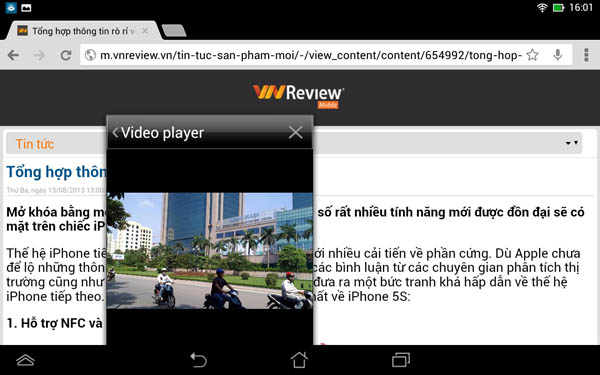 One of the interesting software features introduced by Asus into this tablet is the menu that displays floating apps / widgets. Clicking on the leftmost virtual button will display a floating application / widget menu that allows quick access without closing the current application. Applications / widgets on this menu display "floating" (movable and resizing) on ​​the open application screen, like the multi-screen feature on the Surface tablet and tablets of Samsung. This feature is quite convenient in case you want to watch movies while surfing the web. However, the new floating application menu only supports a few applications including video apps, browsers, emails and some utilities like compass, stopwatch … 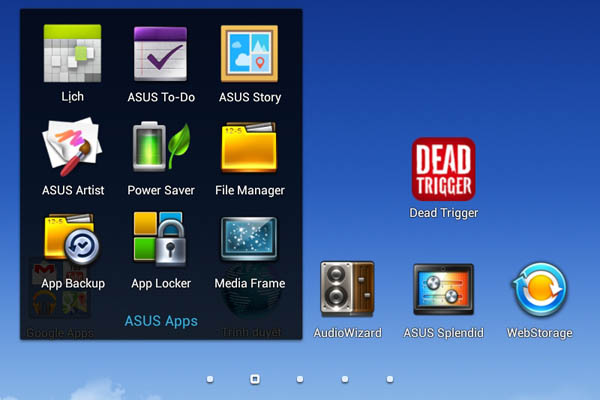 In terms of audio, Asus put into Memo Pad HD7 Audio Wizard software. This software only works with external speakers (no headphone or Blutooth earphones available) and has options to improve sound quality for music, movies, games and audio recording. When the Audio Wizard is not enabled, the device will default to power saving mode with small external speaker volume. But when the Audio Wizard software is activated, the loudspeaker volume is much larger and the sound is more rounded. In volume control, Asus also allows users to adjust different volume levels with music, alarm and notification sounds.

Asus Memo Pad HD7 is equipped with processor system (SoC) MediaTek MT8125 including 1.2 GHz quad core Cortex-A7 processor and PowerVR SGX 544MP1 graphics core. MediaTek SoCs are commonly used in low-cost products, especially in the Chinese market and are generally not appreciated as the SoC of the "big four" quartet including Qualcomm, Samsung, Intel and Nvidia. So, it can be said that equipping SoC MediaTek MT8125 is a way for Asus to maintain attractive price for Memo Pad HD7.

However, in actual use, SoC MediaTek MT8125 along with 1GB RAM of the machine handled well the common needs such as surfing the web, running good applications such as calling, texting, listening to music, taking photos … and navigation operations on the device. It also plays Full-HD movies well, doesn't get jerky and can play heavy games like Dead Trigger, Asphalt 7. However, when playing Asphalt 7 games, the frame is slightly jerky, not smooth. 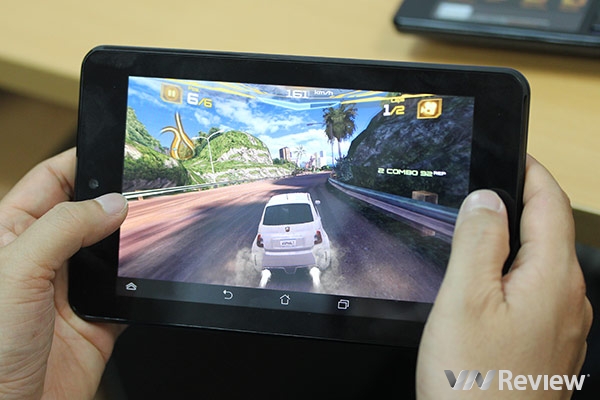 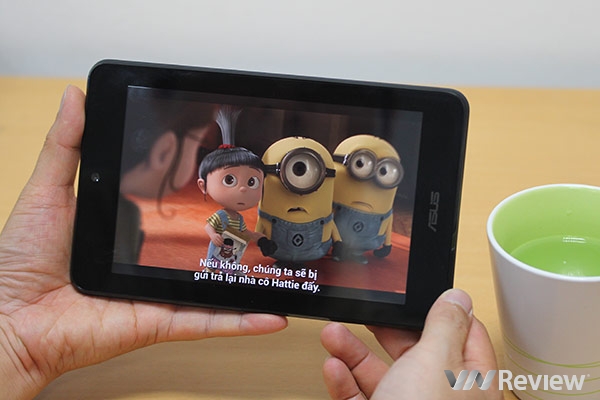 Battery time is a commendable advantage of the Asus Memo Pad HD7. According to Asus, the 3950 mAh battery (equal to the Nexus 7 2013) of this tablet can be used for 10 hours. In actual use, this tablet sees 8 hours 41 minutes of Full-HD movies when Wi-Fi is turned off, the screen leaves the brightness at 80% and the volume to 70% of the new battery runs out. This result is much better than the Asus Fonepad (7 hours) and the Asus Memo Pad (5 hours 36 minutes) we reviewed recently. 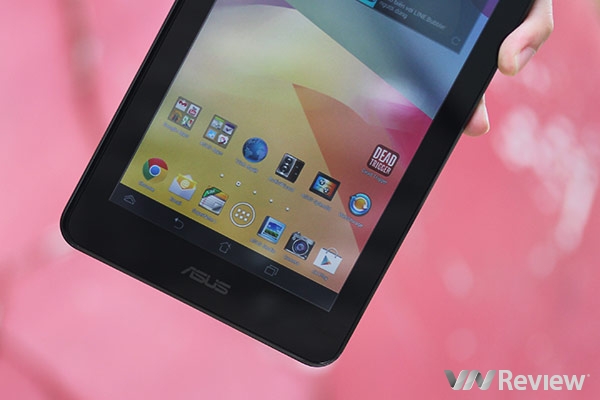 The Asus Memo Pad HD7 is a low-cost tablet with a high definition screen, an agile processor, a very good battery for watching movies over 8.5 hours to charge, internal memory of 16GB (nearly 12GB) free memory) quite large compared to the price range and

Overall, this tablet offers the same experience as the older Nexus 7. Its screen is slightly worse in terms of brightness, the casing and design material is not as good as the Nexus 7 2012, but in return for its cheaper price, there is an additional 5MP camera and memory card slot.

Surely many will expect Nexus 7 version 2013 to be officially sold to Vietnam market in the coming time but if you are looking to buy a cheap tablet at the price range of VND 4 million The Asus Memo Pad HD7 is a good choice today.